La Storia or Pass the Everything 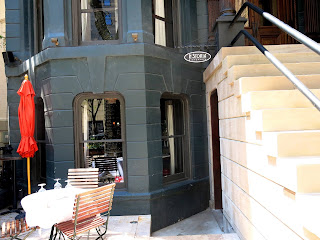 If Brandy has any flaws, one of them might be her propensity to sample from the plates of her dining mates during a meal. "I just want to make sure I try a little bit of everything!" she explains in justification, Most of her friends are now used to this sort of behavior and tolerate her constantly reaching her fork across the table to pick at morsels on their plates, even scooting bits of their meals to the edges in anticipation of her curiosity. "Why don't you go to more tapas bars or dim sum houses if you're so insistent on trying a little bit of everything?" she's been asked more than once. "Because what if I like one of the dishes so much that I don't want to share?" Brandy counters. 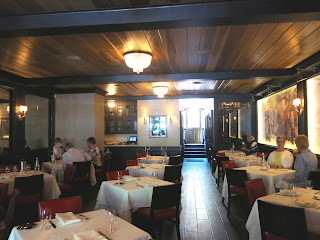 Knowing her proclivity towards pilfering bits of their food, Brandy's dear friends Hawk and Bailey decided to take her to a meal where her FOMOOF (fear of missing out on food) would be quelled. La Storia in the Gold Coast had recently begun what they were calling a "Social Brunch" service; a sort of family-style-meets-prix-fixe set up in which everyone paid $30 a person and would collectively share a carafe of cocktail, 2 starters, a wood fired pizza, and 2 entrees. For Brandy, this sounded like an ideal situation. "It's as if they want you to try everything on the menu!" she exclaimed. 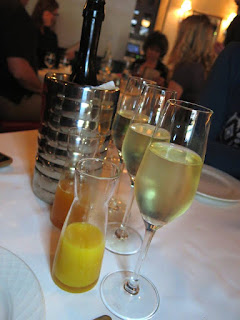 Hidden away on Dearborn amongst a row of some of Chicago's favorite restaurants, La Storia offers rustic Italian cuisine made from some of the freshest local ingredients available. Being below ground level, the restaurant doesn't offer much sunlight, but there are a few cafe tables out front and a beautiful courtyard patio out back for those who desire such things. Inside, the feeling is warm and intimate with a bistro-like atmosphere. The main room is dominated by a fantastic mural, depicting famous figures in Chicago culture, from Walt Disney and Al Capone to Oprah and John Belushi. Brandy, Bailey, and Hawk (none of whom are native to Chicago) had a delightful time trying to identify all of the individuals and what their connections to Chicago were.

The first important communal decision was to pick one of the offered cocktails. The table decided on the bottle of Prosecco, which came with fresh orange and peach juice, so that the table could make their own mimosas or bellinis.

Soon the starters were hitting the table. The three friends decided to order a sweet and a savory bread option. For the sweet, they sampled the Focaccia, which came adorned with house made ricotta, honey, and kumquat jam. Brandy just adored this sweet little bite of heaven, with its extremely light and fluffy texture and just a little crispness on the crust. The flavor was buttery and sweet with a little tang from the kumquat. "When I saw 'focaccia' on the menu, I thought it was going to be a denser bread, but this is divine!" exclaimed Bailey. For the savory option, the trio sampled the Lobster and Avocado Toast. Normally opposed to trendy dishes, Brandy was actually quite pleased with this version, which was piled high with large chunks of lobster meat and fresh avocado. Hawk's piece had a little too much char on it for his liking, but otherwise the group found the toast to be well seasoned and the perfect combination of crunchy and creamy. 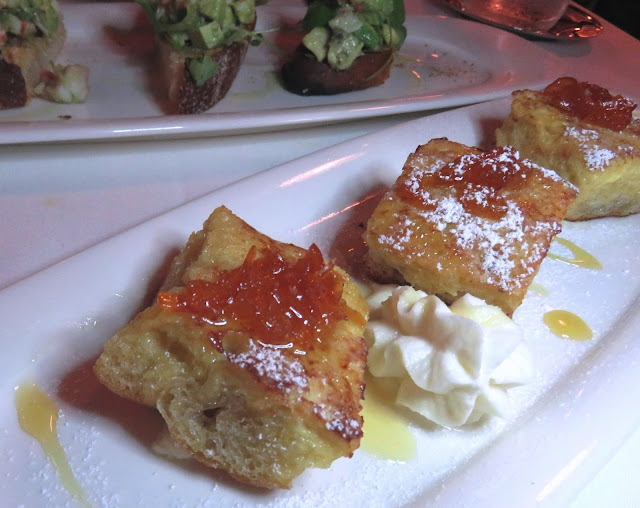 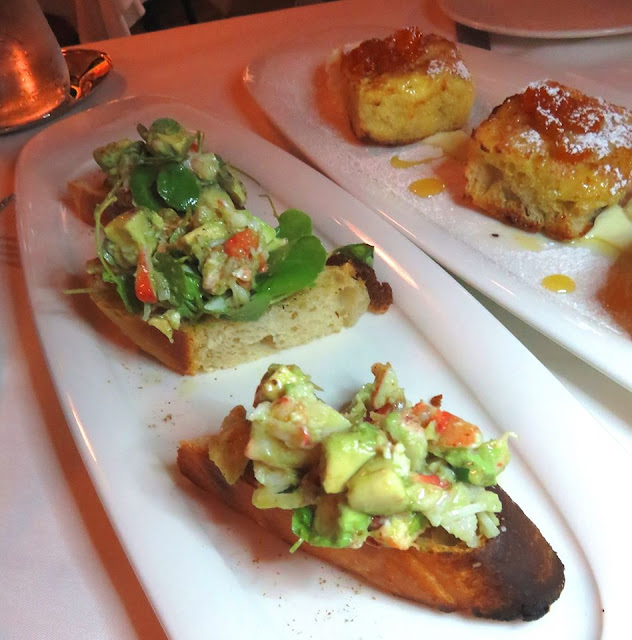 Next up came the pizza. The table had decided on the Pesto version, which came topped with Guanciale, a fried egg, more ricotta, and of course, a basil pesto. Bailey was a little skeptical about having pizza for breakfast, but once she understood that this was not some Chicago style abomination, but a wood fired, chewy crusted, lightly adorned flat bread, she gladly took up a piece. The pizza had a good hit of salty flavor to it, which highlighted the smokiness on the crust. The pesto had just the right vibrancy and consistency for Brandy, and the egg on top was cooked to perfection. 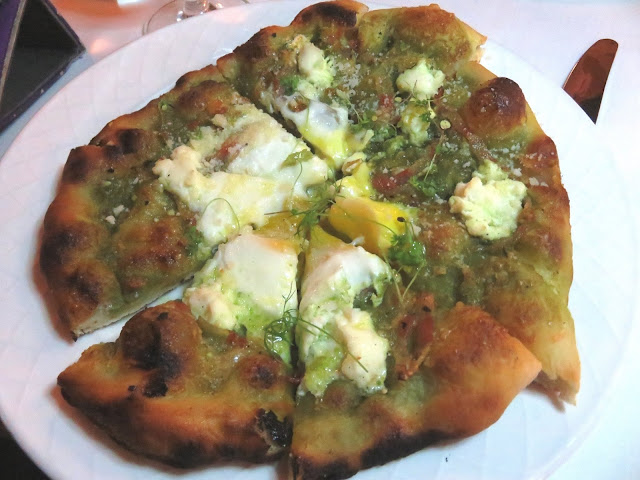 The main courses were next up, the chosen dishes being an Eggs Benedict Florentine with charred artichokes, spinach, and fontina fonduta and the Steak and Eggs with potato hash, king trumpet mushrooms, and caramelized onion. The steak had been cooked to a perfect medium rare (even by Hawk's exacting standards) and had a good char on the outside. The crispy bits of onion and potato were a delight, and the earthy mushrooms added to the richness. As for the benedict, the eggs were poached beautifully, cascading a waterfall of yolk when Brandy sunk her knife into them. The flavor was actually quite unique, having a little more bite and lightness than a typical Florentine benedict because of the artichokes. 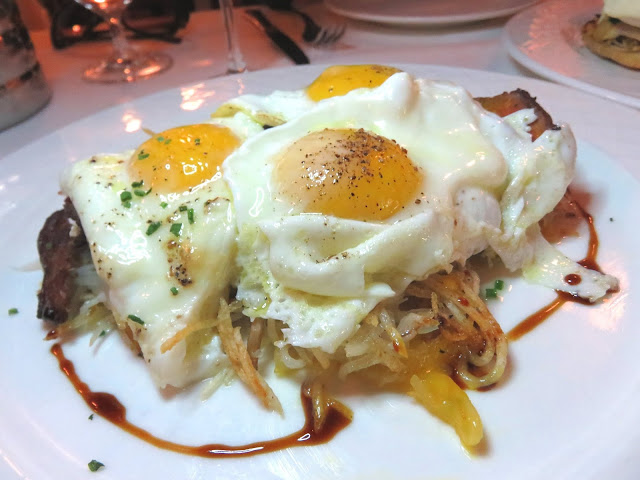 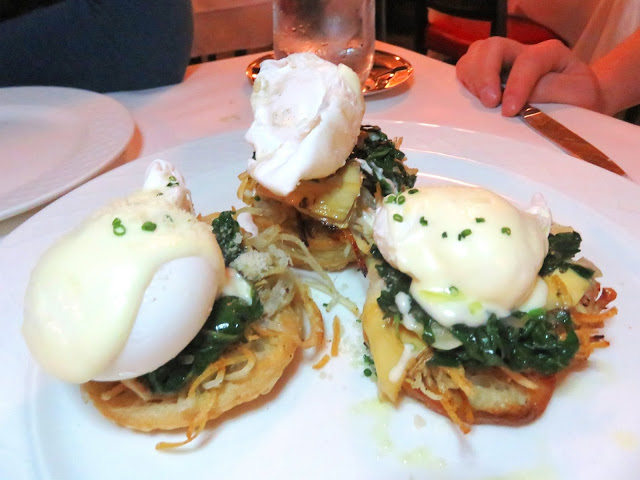 Finally, the group decided to end their meal with something sweet and ordered up a slice of the special Italian Cream Cake. The layer cake was impossibly moist with a slight lemon flavor, which was offset by some bright, fresh strawberries, a coconut cream, and some crunchy candied pecans. "This is like every classic dessert flavor all in one bite!" Bailey exclaimed, to which Hawk agreed, and Brandy nodded as she shoveled another bite into her mouth and slowly slid the plate closer to her section of the table. 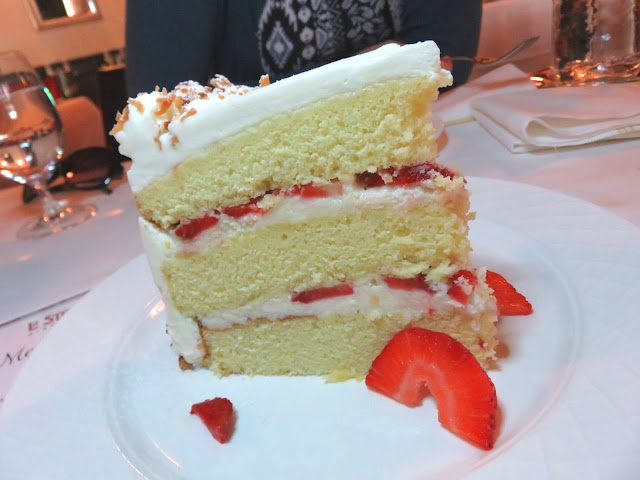 "I have to say, there is something rather pleasant about being able to try so many things all in one meal," said Brandy as they sipped the dregs of their coffee, "And I really liked that all of us had full permission to try all of the dishes, so that it wasn't just me snagging bites from every plate." "I can see why you do that, though," said Bailey, "It's kind of fun not having to worry that you're missing out on your second or third choice dish." "And the price point is kind of incredible for the amount of food you get!" said Hawk. "Let's just all agree that from now on, when we go out to eat, we'll always order family style," said Brandy, "Unless I really like my dish. Then none of you are allowed to have any. In fact, you're both lucky I let you have any of that cake." 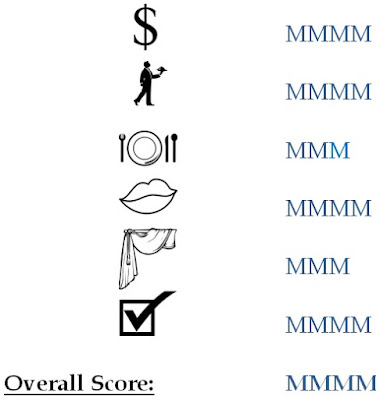