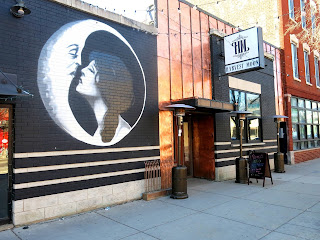 While Bunny and Brandy were busy branding 2017 "The Year of Togetherness," Brandy's friend Bailey was making a different New Year's resolution in the form of returning to her love of art. "I barely painted at all last year. I miss it so much. Being covered in splatters of color, having pigment under my fingernails, getting splinters from gripping the brushes too tightly... Oh, I miss it so much." "Well then," said Brandy, "Why don't you bring out a canvas and get to it?" "I need some inspiration!" Bailey sighed, "With everything that happened last year, I just sort of... lost touch with my creative spark. I need to find something to ignite my imagination." "Well, I know my little old brain box always works best when I'm well fed." "Brunch is your solution to everything, isn't it?" "Brunch is the world's solution to everything, darling, not just mine." 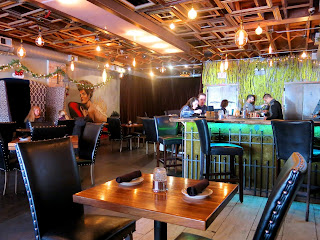 Thinking about Bailey's artistic inclinations, Brandy was drawn to an eccentric little spot in Bucktown called Harvest Moon. Backing up its Bohemian vibes with a local and seasonal inspired menu, a rotating selection of local beers, and local live musicians, Harvest Moon stood poised to become a favorite hangout for artistic types from all over the city.

From the very start, Brandy was enchanted by the design and feel of Harvest Moon. Large surreal murals of Edwardian women filled the space on the brick walls not taken up by the high backed booths, which adorably resembled over sized arm chairs. The bar's back wall and sides had been covered in moss and lit with tiny fairy lights for an extra touch of magic, while the ceiling had been decorated with a patchwork of empty picture frames. The layout was open and flexible enough to allow for different table configurations, which came in handy when one took into consideration the stage at the back of the room, which throughout the week would host live musicians, DJ's, and trivia nights. "I simply adore the decor," Brandy swooned, "This place is like a speakeasy in Wonderland!"

The brunch menu was limited to a few signature entrees accompanied by traditional brunch cocktail options (like bottomless mimosas and Bloody Mary's, though the bloodies came in some very interesting sounding flavors), so Brandy and Bailey decided to just split a few dishes between them while sipping on some mimosas. First up, they started with the intriguing sounding Breakfast Pot Pie. Brandy had been hoping for something quiche-like, but the dish actually more closely resembled a frittata. Coming served in a miniature cast iron pot, the dish consisted of an eggy mixture with spinach and bacon topped by a circle of puff pastry. Brandy enjoyed that these traditional breakfast flavors were being combined in such a new and interesting way, especially the bacon, which had been crumbled so as to function almost as a flavoring salt. 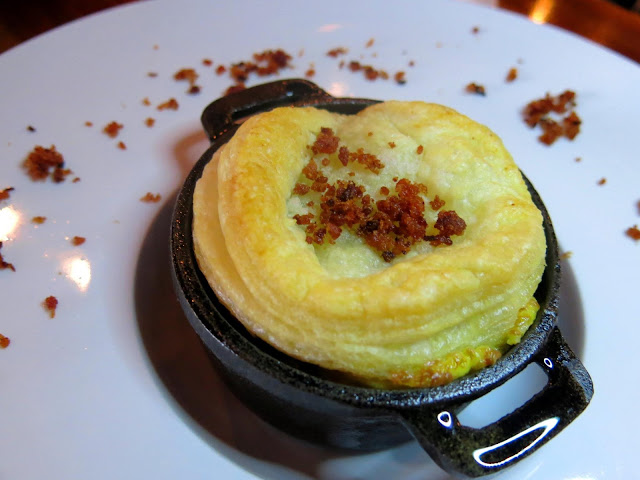 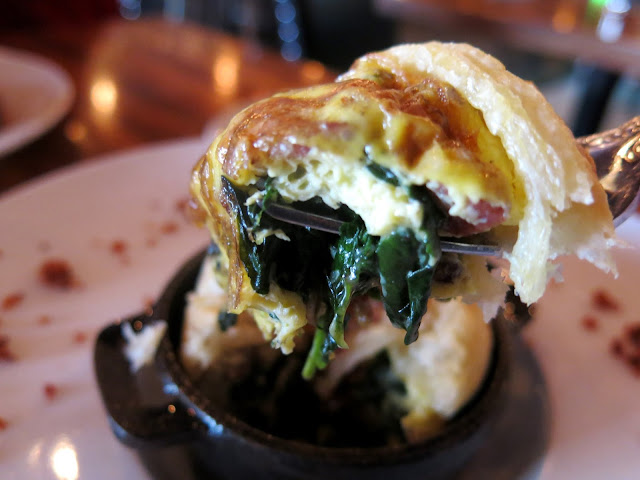 Next up, they tried the Shrimp and Grits, which like the pot pie, ended up more resembling another traditional brunch dish. Instead of southern style grits, this dish actually came with a block of polenta, which was surrounded by several large shrimp, a spicy tomato sauce, and topped with a fried egg. The spice in the tomato sauce certainly wasn't kidding around and had both Bailey and Brandy reaching for their drinks after the first bite. "This reminds me more of the Spanish dish, Eggs in Purgatory," said Brandy, "Quite ingenious to combine the two dishes into one." The shrimp were nicely tender and the egg too was perfectly cooked. "And look, we got a double yolk!" Bailey exclaimed, pointing to the egg, "Those are good luck, you know!" 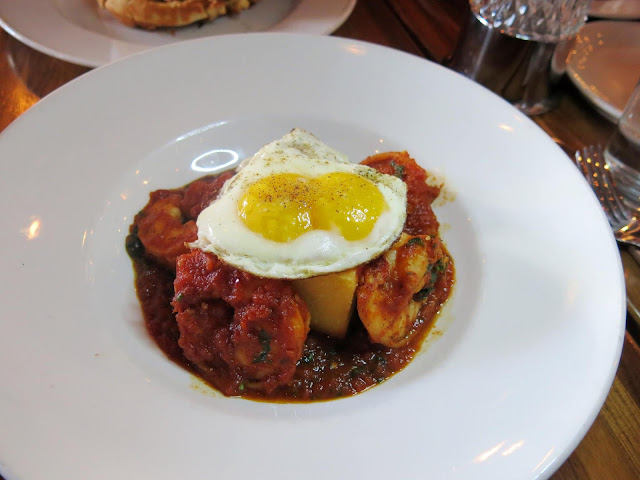 Following that, the two dived into the Chicken and Waffles. The chicken was quite a generous portion of leg resting on a large waffle, which had more of the crumbled bacon mixed into the batter. Bailey, the expert on fried chicken, really approved of the cornmeal coating on the chicken, which had a great crunch, as well as the tender meat. The waffle, on the other hand, was a bit dense for her taste and even though it had been dotted with bacon, didn't seem to have much flavor. "The whole point of chicken and waffles is that it should combine sweet and savory," Brandy observed, "So in my opinion, the waffle generally needs to be firmly on the sweet side. Otherwise, what you've got is more chicken and a biscuit." Of course, a good slick of maple syrup helped to bring the flavors together a little better, but still, both ladies felt the waffle needed a reformulation to really live up to the delicious chicken. 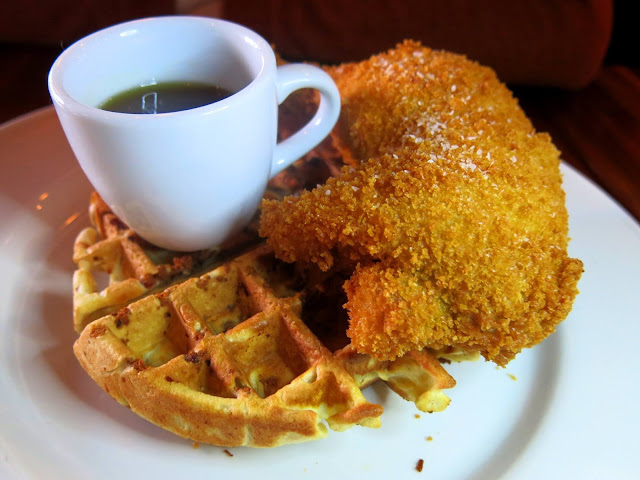 Lastly, they ended on a sweet note with an order of the Cinnamon Apple French Toast. The toast came served with cooked green apples and plenty of whipped cream. While well done, there wasn't anything really remarkable about the dish that set it apart from similar dishes at other establishments. The apples were nicely sweet and tart at the same time, the toast was eggy and well caramelized, and the cream added a nice bit of decadence. "You know me," said Bailey, "I'm never going to turn my nose up at anything with apples in it." 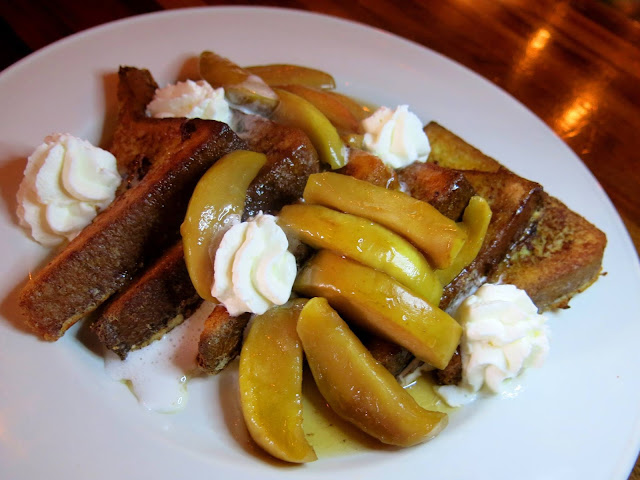 The service at Harvest Moon was relaxed and friendly, leaving Brandy with not just the feeling of being taken care of, but of having actually made a human connection. The prices were quite good for the dishes as well, mostly ranging from about $10-$15 a plate, but it seemed that most of the plates were devoid of side dishes, which had to be ordered separately. "So, do you feel inspired yet?" Brandy asked as Bailey finished up her last piece of chicken. "Oh yes, I think I've definitely found my inspiration. You know how the chef here has combined ideas from several different dishes to create new ones? I think I want to try something similar by combining different styles of art to create a whole new genre!" "Sounds good to me," said Brandy, "After all, the greatest meal known to man was created when some intelligent person decided to combine breakfast and lunch." 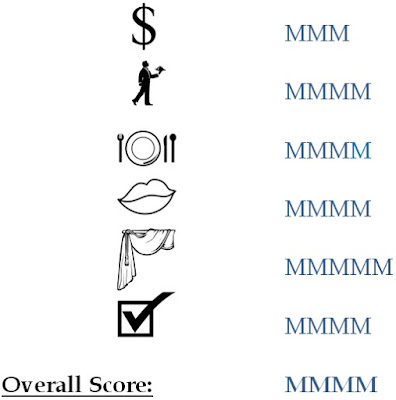