Up Comedy Club or Brunching Out Loud 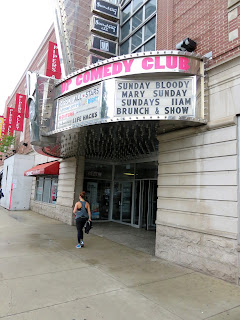 A long, long time ago, a very young Brandy arrived in Chicago, full of hope and dreams of stardom. She had already made a name for herself on the music hall circuit back home in Old Blighty (and indeed, there are still those in certain circles that speak of her famous Dance of the Seven Owls with great admiration) and had now decided to conquer The Colonies. Shunning the typical routes of Hollywood and Broadway, Brandy made her way to Chicago, where a burgeoning comedy scene seemed the real place to be.

Stepping off the bus and straight into The Loop, she began to inquire about where a young hopeful might go to get acquainted with the bigwigs of comedy and she was directed to a modest little theater in Old Town, where a bunch of beatniks were causing quite a stir with their irreverent improvisational sketch comedy shows.  "Put me in one of your shows!" Brandy proclaimed as she stepped grandly inside the theater.  "Do you even know what improv is?" A man with a clipped beard and a black hat asked her. "No, but I'm sure I'll figure it out along the way!" she responded.

Worried she didn't quite have the skills, but impressed by her gumption, Second City hired on Brandy to do various jobs about the theater, like answering phones, sweeping up, getting lunch for the actors, and such so that she could learn as she went.  Not long after she started there, another young British lass, a cheerful and bubbly little thing with a lust for adventure named Bunny Bacon, was hired on as a coat check girl.  And that, dear readers, is how Bunny and Brandy first met. 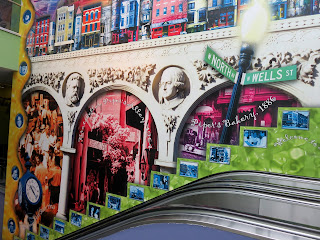 "It's simply too perfect!" Brandy exclaimed as she starred up at the marquee over Piper's Alley in Old Town, "Brunch at Second City!  I really can't believe it!" Brandy was eyeing up a sign that read "Sunday Bloody Mary Sunday," which was advertising a brand new brunch service at the Up Comedy Club, which featured a full buffet, unlimited drinks, and a 45 minute improv comedy show, all for the price of a $40 ticket.  Knowing dear Bunny was off in the Andes somewhere with her husband Benedict and therefore would be unavailable to accompany her, Brandy dialed up her friend Bailey Blue and informed her of he extraordinary news. "I'd like to think I had some little part in this newest development," Brandy smirked. "Do they even know you're a professional bruncher?" Bailey asked.  "I can't talk any more now, luv, I'm going in to buy us some tickets!" Brandy said in a rush and hung up the phone. 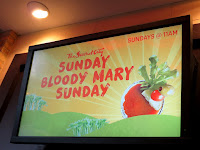 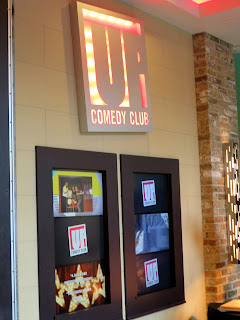 Up Comedy Club, located on the third floor of Piper's Alley, is one of the more recent additions to Second City's arsenal of stages.  Not only does it feature some of Second City's signature improv and sketch comedy performances, but also hosts traveling stand-up performers like Todd Glass, Dave Attell, and Al Madrigal.  The theater is set up in the classic cabaret style with open booths at the back of the room and tables throughout the rest of the floor, all facing the stage.  The seating was based on arrival, ensuring everyone had a fair chance at a good view, though with the room as wide as it was, there was nary a bad seat in the house.  Brandy was quite pleased by how spread out the seating was, meaning people weren't piled on top of one another.  "One does need a bit of arm room when eating," Brandy commented, approvingly, "And I suppose so do the more aggressive laughers in the room." 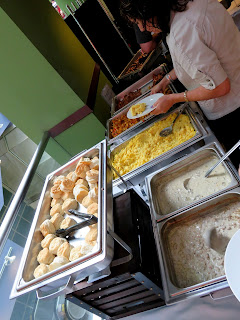 Once shown to their seats, Brandy and Bailey were allowed to visit the buffet, which was set up just outside the theater.  First, the ladies visited the hot table, which featured breakfast staples like scrambled eggs, bacon, home fries, and sausage as well as biscuits with either sausage or mushroom gravy.  Among the more interesting choices were a garlic butter shrimp, creamy polenta with Taleggio cheese, and brussel sprouts with crispy panchetta, as well as some tantalizingly fresh looking spinach and tomato salads.  On the cold table was an amazing array of fresh fruit and pastries, like blueberry muffins, cinnamon rolls, and almond croissants.  Two more stations featured fresh proteins; some carved-to-order pork tenderloin and fried chicken with freshly made waffles.

After filling their plates to the brim (Brandy's strategy was to get a little bit of everything straight away instead of filling one plate and then returning for seconds later, as she didn't want to have to get up during the show), Brandy and Bailey returned to their seats and were immediately beset upon by kindly servers offering them coffee, mimosas, and Bloody Mary's, all of which were refilled with brilliant efficiency during the course of the morning ("I don't think I've seen the bottom of my glass yet!" Bailey giggled at one point). 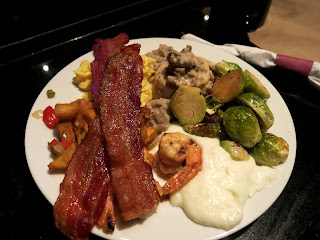 Both ladies were quite impressed with the food, especially since Brandy is sometimes a little skeptical of buffets.  Favorites included the tender sprouts and salty panchetta, the very creamy polenta, the tender biscuits with their accompanying deliciously savory gravy, and especially the chicken and waffles, which Brandy and Bailey had dressed with cinnamon apples and spicy syrup.  "I have to say, this food is certainly nothing to laugh at!" Brandy said, showing a cocky smile to Bailey.  "Perhaps you need to look into sighing up for a comedy class upstairs in the training center to improve those one liners of yours," Bailey responded, rolling her eyes. 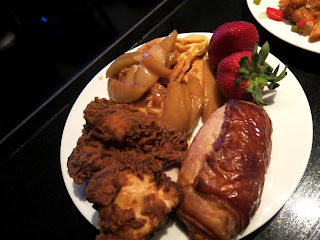 Brandy's instincts in bringing all the food to the table proved to be useful, as the lights began to dim right at 12:00.  The house company of veteran improv performers then took the stage and let loose 45 minutes of mimosa snorting hilarity, using suggestions from the audience to craft one hilarious scenario after another, even indulging in some brunch themed humor themselves with scenes based at a pre-wedding brunch, a brunch party, and a post church service pancake breakfast.

"Oh, it feels so good to back," Brandy grinned and she and Bailey collected their things after the show, "And I'm glad to see that though the theater has grown since I first became acquainted with it, the quality of the comedy and the service hasn't decreased in the least.  I thoroughly 'Yes And' this brunch."  Bailey gave Brandy a quizzical look.  "'Yes and?" she asked.  "It's a comedy term, dear.  As in 'Yes, and I'd like some more mimosa please.'" Brandy grinned.

The writers of this blog were invited to dine free of charge by the theater in exchange for an honest review. 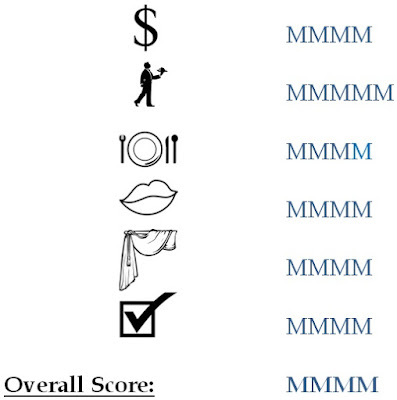