Nellcote or Tis the Season to be Blogging 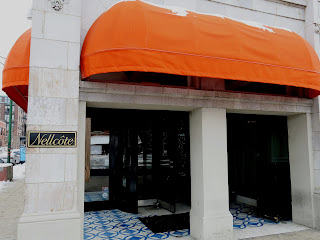 Chicago's culinary scene is blessed in more ways than one.  This city has an incredible variety in it's cuisine choices, it has world renowned master chefs, it has excellent local produce and protein for it's restaurants to choose from, and best of all, Chicago has legions of food bloggers to research, test, capture, and tell it's citizens exactly where all the best goodies can be found so that they aren't left drowning in a sea of take out menus.  Obviously, Bunny and Brandy's little corner of the web covers the brunch scene to the best of our abilities, leaving other nooks and crannies to be explored by a lot of other talented writers and food enthusiasts.  Luckily enough, there is a website called Chicago Food Bloggers (of which Bunny and Brandy are members), founded by the lovely Mike Kostyo which compiles many of Chicago's most prolific culinary adventurers into one handy database (and for those of you looking for any last minute foodie gifts, here is the official Chicago Food Blogger's Gift Guide, to which Bunny and Brandy made a few contributions).

Aside from the Chicago Food Bloggers, Brandy is a member of many exclusive and private clubs (her sewing circle has more secretive guidelines than the Freemasons), but none, perhaps, are as mysterious as the Guild of Dunwich Code Breakers, a society so elite that members have to obtain special ordinances in order to permit more than one of them be present in the same country at any one time.  But it was one of these very ordinances that had to be obtained when Brandy learned that the founder of the GoDCB, Baron Von Blackfisk (a very mysterious man with an even more mysterious past) was coming to Chicago.  "I simply must take you to brunch with me when you get here!" Brandy wrote to him, using a Caesar Shift Cipher.  "I don't know if that would be proper, my sweet," he replied in Morse Code, "What if we were to both perish in some tragic meal time accident?  The Guild would never be the same."  "Oh, don't be silly," Brandy said, dropping all pretense and resorting to English, "Nothing bad has ever happened to anyone at brunch.  Well, except for that one time at Roof..." And with that she made plans for the Baron to tag along with her to the Chicago Food Bloggers brunch at Nellcote in the West Loop. 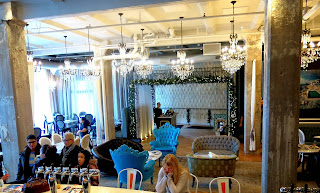 First impressions of Nellcote were breath taking.  The ground floor dining area was wide, open, sunny, and opulent with about 20 crystal chandeliers scattered across the ceiling, a gorgeous modern bar at the back, high backed turquoise chairs forming a small lounge area just inside, and marble stairs on either side of the room that lead to a second dining area with bar seating and huge, cushy banquets.  "It reminds me of an old European ballroom!" Brandy sighed, "Oh, I danced with many rogues, princes, and rogue princes in rooms like this in my day!"  Baron Von Blackfisk tilted his wide brimmed fedora just barely above his eyes and surveyed the room.  "I wonder if it's haunted," he mused eagerly. 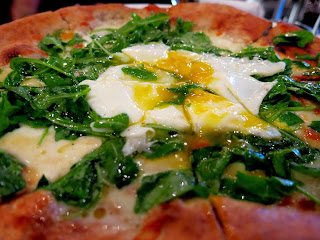 Brandy and the Baron were taken to the top most section of the restaurant and seated at a long banquet table with all of the other bloggers.  Having arrived fashionably late (a practice not shared by most of the other bloggers who had arrived early), the duo were seated down at the end of the table along with Brandy's good friend Hawke from The Cider Press and a new friend, Rebecca from Rebeccamendations, who though seemingly perplexed by her eccentric brunching mates, was a delight to chat with about her blogging perspective, having only recently moved to Chicago from Austin, Texas.  The delighted bunch were treated to glasses of Prosecco in order to toast with, as well as a few of the Sunny Side Up Pizzas (Nellcote prides themselves on their house made doughs, which are used to make fire grilled flatbreads like this one as well as fresh pastas).  The pizzas had a lovely smoky taste to the crisp and chewy crust, which matched nicely with the silky egg topper, the peppery wilted arugula, and the sharp fontina cheese. 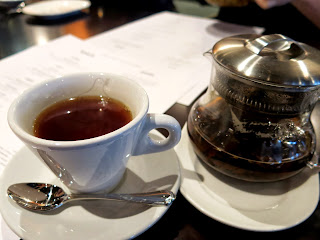 Brandy and Rebecca also decided to order some of the Rare Tea Cellars teas on offer, with Rebecca opting for the Emperor's Chamomile and Brandy sticking with her favorite, the Regal Earl Grey ("I knew an Earl Grey once," Baron Von Blackfisk commented, "He was a rather quiet little gentlemen.  Had a taste for tweed jackets and loose women."  "I suspect you're thinking of someone else, deary," Brandy said, rolling her eyes).  Both teas came in loose leaf form, contained in their own little pots, which enabled the consumer to watch them blossom and dance as the hot water worked its magic. Rebecca was fascinated by her chamomile, which had a mysteriously citrus note to its scent, and Brandy very much enjoyed her Earl Grey with its rich muskiness and smooth bergamot flair. 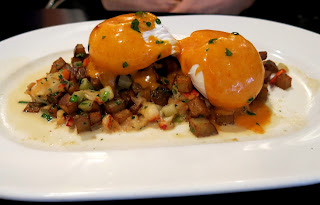 For his entree, Hawke went for the Lobster Hash, a brilliant combination of expensive ingredients used in a simplistic recipe.  Hawke remarked on the beautiful smoked flavor from the paprika spiked Hollandaise which covered the two delicately poached eggs on the top, as well as the clear flavor of good quality olive oil coating the small chunks of Yukon gold potatoes.  The lobster was tender and buttery, just as it should be, with its flavor very distinct from, yet harmonious with the rest of the elements in the dish. 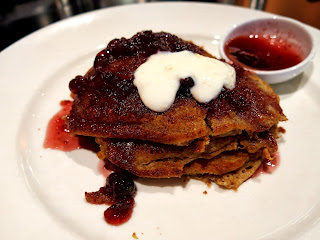 Baron Von Blackfisk went with the Whole Wheat Citrus Pancakes, which came topped with a whipped yogurt and a cranberry compote ("My sweet tooth is a demanding mistress at times," he told Brandy in a whisper).  Upon first bite, the Baron was instantly in love, taking off his fedora for the first time that morning in order to show his reverence for the dish.  He compared the taste of the pancakes to the deliciousness of a fried dough, though with a more nutty note from the whole wheat flour.  The cranberries and the yogurt matched perfectly in their tart sweetness, balancing the uniquely caramelized flavor of the pancakes quite well.  "I will always remember the morning I beheld pancake perfection.  No other round of dough will ever compare... I'm ruined forever," the Baron wept.  "Oh don't be so dramatic," Brandy grumbled. 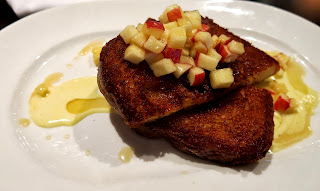 Brandy, as always, had to get a little sweet and savory into her meal, and so she first order a plate of Pain Perdu ("Otherwise known as French Toast in less fancy circles," she informed the table), which came topped with a caramel creme anglais and diced red apples.  The toast, much like the pancakes, was absolute heaven, having been created from house made brioche.  The outside had an amazingly even crispness to it, almost like a very thin layer of caramel was coating the bread, while the inside remained pure buttery goodness.  The untouched apples helped to cut the richness of the toast as well as the creamy glaze that surrounded it.  "I've never had any French toast with a texture quite like this," Brandy commented, "I suppose this deserves its higher title.  I would never confuse this for some run of the mill, overly saccharine, soggy diner dish, that's for sure!"

To finish off, Brandy ordered the Breakfast Pasta, which consisted of house made spaghetti, bacon, pecorino cheese, and a 1 hour egg (an egg poached so delicately that its yolk and white achieve the same consistency).  Breaking the yolk provided the pasta with a rich sauce that complimented the salty cheese incredibly well.  The bacon, though in thick chunks, didn't overwhelm the dish with its smokiness and peppery flavor, leaving the true star that was the pasta to shine brightly.  The spaghetti was on the thicker side with a lovely rusticness to it, making for some bites that were al dente and others that were a little softer.

Brandy was mightily impressed with everything about Nellcote, from their beautiful and charming servers, to the attention to detail in the food, to the perfectly beautiful interior.  "Do you think they'd sell me one of those turquoise chairs?" Brandy asked Baron Von Blackfisk as they stood at the marble steps, looking out at the room.  "Perhaps.  But would you really want to rob them of the whimsy?" he questioned her with a significantly mysterious raise of the eyebrow.  "I suppose not," Brandy sighed, "Then maybe the chandeliers?  Surely they could part with one of them!" 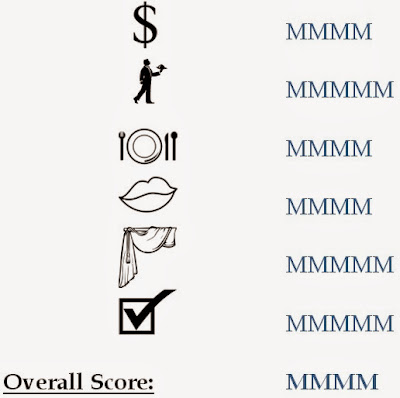