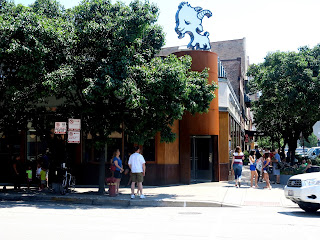 Back in July when Bunny had arrived back in Chicago for a short time, Brandy was determined to take her anywhere she wanted to go.  They spent a day walking around the Lincoln Park Zoo, ooing and ahing at the myriad of animals.  They watched fireworks from the lakefront with a neighborhood's worth of friendly people.  They also went to a Cubs game to partake in that traditional Chicago pastime of  heckling out of town players until the inevitable beating of the home team occurred. 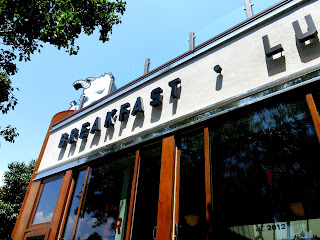 "What about food?  What do you want to eat while you're here?"  Brandy asked Bunny.
"How about the Billy Goat Tavern?"  Bunny said.
"The Billy Goat?  Why would you want to visit that old greasy spoon?  Its for tourists and 20 somethings who have just moved to Chicago to pursue a career in comedy."
"What?  I thought it was owned by a world famous chef!  You know the one from the television program?"
"Oh, no dear, you mean Girl and the Goat," Brandy corrected her.
"Oh, well, goats are goats.  What about Girl and the Goat then?"  Bunny suggested.
Brandy chewed her lower lip and said, "Sure.  Do you have a time machine handy so we can go back six months to make a reservation?"
"For a cheeseburger?!" Bunny scoffed.
"No Bunny, that's... look, let's go to brunch at Little Goat.  It's still run by Stephanie Izard, but its more of a diner style place."
"Little Goat?  My goodness, how many goat themed restaurants are there in Chicago?"
"Six.  There's six.  And we're going to Little Goat." 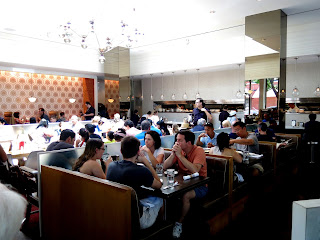 The inside of Little Goat seemed to be carrying the spirit of an old fashioned diner, yet had dressed it up in a shiney new outfit for the modern age.  The staff were dressed in old fashioned garb that wasn't overly obnoxious and the interior seemed to have just enough little touches of chrome to evoke the idea of kitschiness without giving over to it completely (the kitsch quotient was probably fulfilled by the giant spinning cartoon goat on top of the building).  All of these little touches made the space feel relaxed and casual, a slight of hand that hid the complexity and originality of the menu. 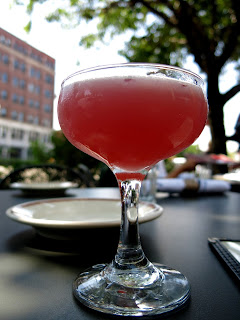 Brandy started with a cocktail called the French Intervention, a zingy mix of grapefruit bitters, fresh lime juice, grenadine, and an agave liquor ("Seems more like a Mexican Intervention to me," Brandy scoffed).  The mix was very refreshing, but a bit heavy on the bitters for Brandy's liking and seemed very small for the price.  "I guess it must be potent," Brandy said, swallowing half the glass in one go. 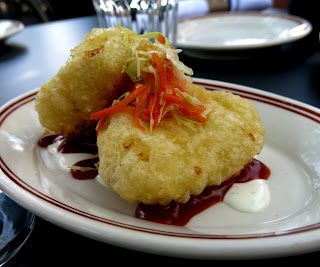 The Ladies split an order of the Tempura Mashed Potatoes as a starter, mostly just so that they could see what such a dish looked like.  "I don't understand, do they mix the batter into the potatoes?"  Bunny questioned, "Or perhaps they surround a crunchy fritter with the potatoes?  I just can't picture it!"  What came to the table more resembled crab cakes in that they were circular patties with a crunchy looking coating.  Served along side the potatoes was a tangy Asian style BBQ sauce and a cooling ranch that both Bunny and Brandy thought made the otherwise subtly seasoned spuds come alive.  The outside of the cakes were lightly crisp, but gave way easily to the butter soft taters within, making for an oddly familiar mix of textures that was still somehow wholly unique.

For her entree, Bunny chose the decadent sounding Porkbelly Pancakes.  The dish was essentially a stack of savory pancakes flavored with green onions and topped with succulent pulled pork belly and a crunchy Asian slaw.  Bunny found the pancakes to have a nice chewy texture which matched well with crunchy vegetation and soft, melt in your mouth meat.  The only thingy Bunny longed for was a little more sourness from the dressing, which seemed a little on the bland side. 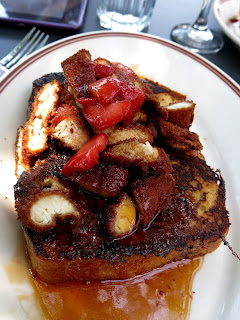 Brandy chose the Bullseye French Toast, a sort of hybrid of a chicken and waffle meets toad in the hole, made with a traditional egg battered bread that had a soft fried egg at its center.  The bread itself (made in house at Little Goat's side bakery) was a sweet onion brioche, which made it a little more savory than any average French toast, and was helped along by a very sweet BBQ flavored maple syrup and tart, fresh strawberries.  The chicken was cut in thick chunks and had a brilliant crunchy coating, though the meat was rather dry on the inside.

Though a bit on the pricey side for a so called diner (but reasonable for the quality ingredients and preparation skills) Bunny seemed quite happy with her trip to Little Goat.  "Chicago seems to want to support Chef Izard in everything she does," she said as Our Ladies gathered up their things, "I wonder if that means they've finally forgiven her for bringing her pet goat to the Cubs game."  "I don't think that's quite right, Bunny," Brandy sighed. 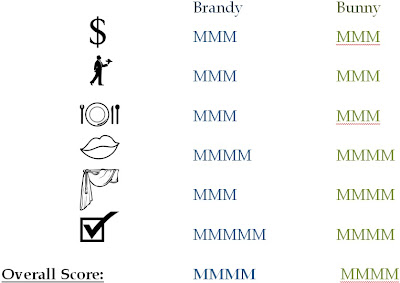