La Fournette Bakery or Killing Me Softly with His Carbs 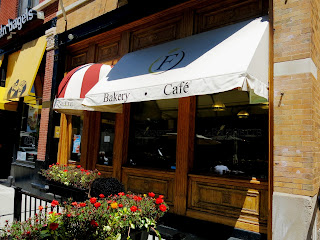 Unsurprisingly, Brandy is not a great fan of the health food movement.  "If I've lived this long without eating like a rabbit, I think I'll be fine," she says, "After all, you never hear a 100 year old saying they've had nothing but salads all their life.  They've usually got a diet of steak, wine, and cigars."  In fact, Brandy had been keeping an Atkins-like diet for years without even knowing it (she simply went through a phase where she was craving mostly bacon at all her meals), but soon began eating bread more often in open rebellion of the carb-cutting trends.

And so it was that recently after watching a television program about the dangers of carbohydrates, sugar, butter, and other such culinary bad boys, that Brandy began craving European style pastries, which usually consisted of all the terrible things mentioned above in abundance.  After a quick argument with her smart phone (Brandy and Siri are sworn enemies), Brandy received the name "La Fournette Bakery," located in the heart of Old Town. 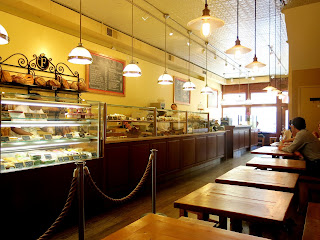 Brandy found an inviting, European style bakery on one side of the room, and a line of small cafe tables on the other.  The room had a warm feeling, being simply done in bright woods and butter colored walls.  "Can I help you?" said a bright eyed young lady behind the counter.  Brandy pulled her attention away from the glistening pastries behind the glass to the chalkboard menus above the girl's head and placed her order.

In a matter of minutes, her food was ready, and presented rather sweetly on a wooden serving tray.  "Am I getting breakfast in bed?" Brandy joked with the gentleman who had called her forth to receive her meal.  He smiled wryly at her and quickly walked away.

Brandy was a little disappointed to see that the Iced Coffee she had ordered was really a cup of ice, over which one could pour the hot coffee from the warmer on the cafe sideboard, which instantly melted all of the ice and made for a more room temperature drink.  Luckily, it was a dark roast from Intelligensia, so the intensity of the flavored wasn't too watered down. 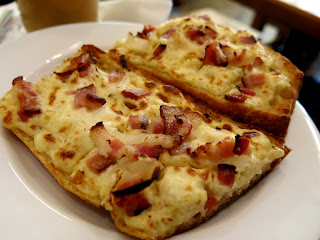 She started off the the Tarte Flambee Baguette, an open faced sandwich topped with bacon, caramelized onions, and sour cream, then set under a broiler to toast.  The bread and a wonderful crunchy crust, but incredibly soft innards, which made it easy to bite off pieces and chew without too much effort.  The bacon was in thick chunks, making each mouthful full of smokey, meaty flavor, while the onions provided a subtle, sweet note.  The true star was surprisingly the sour cream, which having lost some of its moisture while being broiled, had turned into something more resembling a smooth goat cheese. 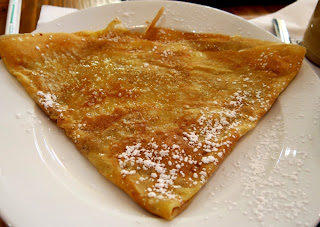 Brandy then satisfied her sweet tooth with a Butter and Sugar Crepe, which was exactly what its name would imply.  The crepe was thin and delicate, as well it should be, but with a slight glutenous chew to it.  The inside had been coated in Turbano sugar, which leant a nice crunch as well as sweetness, and the butter wasn't greasy at all, but added a richness and the slightest hint of salt. 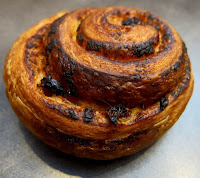 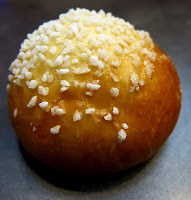 Of course Brandy couldn't think of leaving without a few of those delicious pasties, so she ordered up a few signature pieces to go.  First was the Beignet, a simple round of fried dough, covered in sugar, which was tender and chewy.  Next was the Brioche roll, a more sturdy piece of sweet, buttery bread, which had also been finished off with some of the crunchy Turbano sugar.  Lastly, the Raisin Roulade, a cross between a croissant and a cinnamon roll, dotted with juicy raisins and filled with a luscious pastry cream. 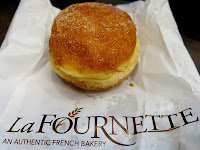 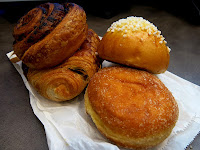 For a quick, moderately priced meal (just under $30 for all the comestibles, plus tax and tip), Brandy thought La Fournette really couldn't be beat as a purveyor of authentic European baked goods and cafe food.  "I may not live in Europe any more, but this just show me that there's not a whole lot to miss about the food, as Chicago provides places like this which are just as good as any corner patisserie," Brandy said, "Now if we could just get a little European style healthcare in this country, I'd really have nothing to complain about." 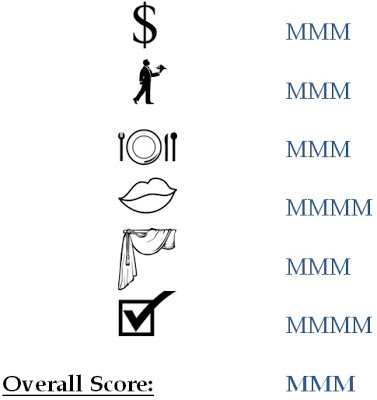