Nookies Tree or An Afternoon Toast 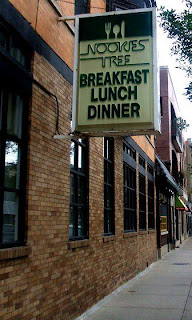 There is nothing sadder to Brandy than seeing a line outside a restaurant on a Sunday morning.  Yes, there are brunch staples in this city which sometimes cannot be avoided, but there are also so many delicious spots where one can simply walk in the door and be taken to a seat.  Many a time, Brandy has had to stop herself from handing out her card to people seated outside the steps of a busy place on a Sunday morning.  "There's no point in waiting, you know," she wants to tell them, "Come with me and let me show you to a place where the tables are waiting for you instead of you waiting for them!"  It is because of this conviction, perhaps, that Brandy has steered away from some of the more popular restaurants in the city, but as she has discovered many times over, sometimes places are popular for a reason. 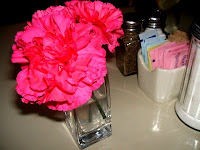 Such is the case with the Nookies chain of restaurants, all of which seem to draw huge crowds every Sunday morning.  Brandy has never quite understood this phenomena, at least when it comes to the location in Lakeview, seeing as how they are open 24 hours a day on weekends (and 7:00am-12:00 on weekdays) with the vast majority of their menu available the entire time (some specials are only available at certain times of day).  "Why do these ridiculous people queue up for hours on a Sunday morning when they could have their precious pancakes and silly sandwiches whenever they'd like?" Brandy often remarks to herself.  And so finally, with a weekday afternoon to spare after a particularly brutal round of window shopping, Brandy decided to see what all the fuss was really about. 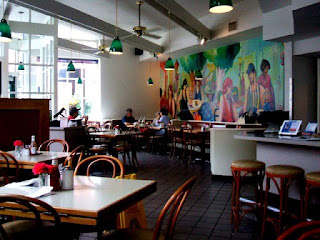 Finding the sunny and spacious restaurant virtually deserted, Brandy took over a four top table in the corner of the room.  A large and colorful mural took up the majority of one wall, but other than that, there wasn't much decoration to speak of.  She did love the variety of eating surfaces, from counter stools to booths to traditional tables on multiple levels, all spread throughout the open single room.  The menu boasted something for every taste for every meal, with dinners listed first, then lunches, and breakfast on the back.  As always, Brandy gravitated towards a good mix of sweet and savory and settled on the Monte Carlo sandwich, which came with a side dish and a cup of soup. 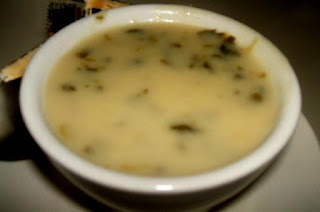 Brandy chose the Cream of Spinach soup, which was offered that day along with a Lentil Soup.  Although the menu listed the soup as being "homemade" Brandy suspected that it was really more "home heated."  The soup was still rather nice, being thick and creamy with good salty taste.

As her side, Brandy chose the Cottage Fries, which were truly one of a kind.  Rounded, crisp on the outside, and soft on the inside, Brandy just could not get enough of these little fried goodies, not even needing to douse them in ketchup to be happy. 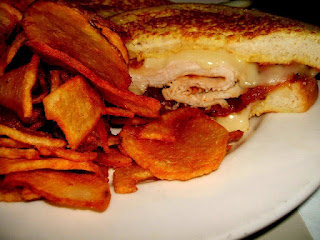 The sandwich was, to Brandy, an ideal mix of breakfast and lunch (commenting on this out loud may have been what caused Brandy's server to never really check up on her, but it didn't matter much as she had been provided with a carafe of water from which to draw her own drink).  The sandwich consisted of turkey cold cuts, bacon, and Swiss cheese in between two slices of French Toast (Brandy wondered aloud again whether this combination of French and Swiss food stuffs had been officially sanctioned by the EU).  The bread was definitely eggy like traditional French Toast, but still firm enough to serve as the foundation for the sandwich.  There was a nice smokiness in the bacon and the cheese was melted to perfection.  On a dish like this, Brandy would usually yearn for a little vegetation to break up the richness, but she found her self savoring the savoriness of it.
Wanting to finish off with something sweet, Brandy asked her server about one of the crepe dishes and was informed that they were not able to serve up crepes that day.  Asking for a suggestion, the waited told her that one of the specials for the day, the Stuffed French Toast, would be an excellent substitution (he also let her know that normally this dish stopped being available about 3:00 pm, which had just passed, but that he would be willing to "pull some strings" for her).  Though hesitant to have yet another French Toast dish, Brandy went ahead with the order. 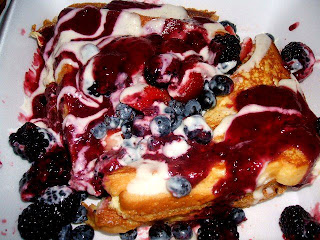 When it finally arrived, Brandy was hardly disappointed.  Very much reminding her of Bongo Room's fabled 4 Berry White Chocolate Cheesecake Pancakes, this French toast was stuffed full of mascarpone cheese and topped with a beautiful berry sauce and a variety of fresh strawberries, blackberries, and blueberries.  Brandy loved how the tart berries cut through the richness of the toast, which was very lush despite the thinnish layer of filling.

As Brandy waddled out the Nookies, she pictured the multitudes of people who would be vying to get in the front door on Sunday morning.  Yes, the food was lovely, the service nice, the atmosphere inviting, and the price not wallet busting by any means, but Brandy's point still remained.  Why wait in line on a Sunday morning to get what you could get any time?  Brunch is a sacred time; a time to explore, a time to relax, a time for...well, taking your time.  So Nookie it up on a Sunday if you must, but remember that there is nothing wrong with spreading the love. 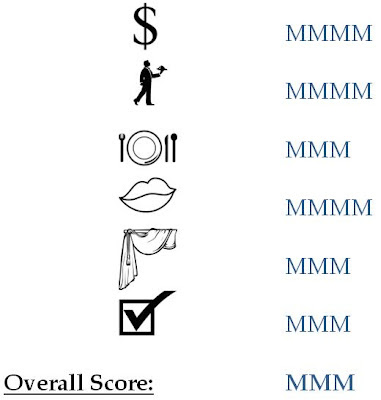 Posted by Bunny and Brandy at 9:17 AM