Frontier or Lions and Tigers and Bears...on Rye! 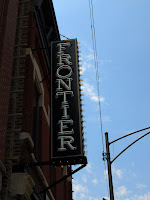 There are not many alive today who can remember who the winner of Miss Big Game 1942 was, let alone the runner up, and there is a very good reason for that, namely that the original runner-up for Miss Big Game1942 was so angered by her failure to capture the prize that she "accidentally" fired on those in attendance.  Members of the audience not hit were rendered temporarily deaf, so they could not hear the announcement of the true winner, one Miss Bunny Bacon, who hit the runner-up square in the right calf to stop her from continuing to "accidentally" fire.
Since that day, Bunny's taste for hunting wild game has been tainted a bit.  But upon hearing about Frontier, a restaurant in West Town that specializes in unique meats, Bunny began to feel the old twitch in her trigger finger.

Frontier seemed at first more bar than restaurant, though upon closer inspection it actually settled somewhere between pub and lodge, as it was done up in lots of rustic woods and metals.  A deceivingly large space, the establishment seemed a little understaffed for such a busy Sunday brunch with only two servers attending to all the tables.  Bunny and Brandy were positioned beside the wood decked beer garden (open, but unpopular in the blistering heat) and presented with water right away.  A hurried yet friendly waitress told them that mimosas and bloody marys were only $5, so two mimosas were duly ordered, arriving in glasses far too small for Brandy's liking. 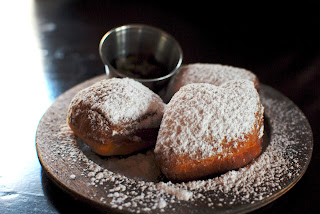 For starters, Our Ladies ordered some House Doughnuts, (more beingets than doughnuts, really), covered in powdered sugar, which came served with Apple Rum Sauce.  Light, fluffy, and warm, the doughnuts were quite pleasant, especially when combined with the sauce, which provided a lovely bit of sourness to balance the sweet. 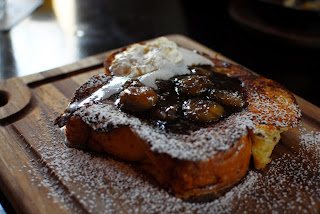 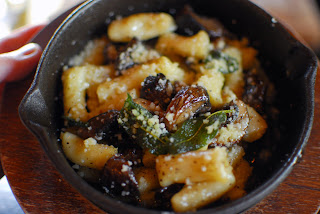 Brandy chose two entrees to satisfy both her sweet and savory teeth, the Bananas Foster French Toast and the Parmesan Gnocchi (her original choice, the quiche, was sadly out that day).  She was quite glad she had decided to order both dishes, as the portions were far from generous.  The French Toast, which came served on a massive cutting board, consisted of only one slice (granted, a rather large slice) of challa bread, doused in rum soaked banana slices, caramel sauce, and whipped cream.  The flavors were spot on as far as matching that of a banana's foster, and the toast was pleasantly soft without being mushy.  The gnocchi were a slight bit on the salty side and had a funny texture to them, being a little too soft and gummy.  "They could have done with a good pan searing," Brandy mused.  The mushrooms that dotted the dish were lovely at first, but became greasy as the plate cooled. 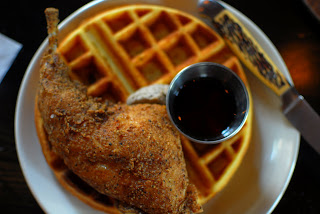 Bunny reigned in her wild instincts a bit and chose the Fried Rabbit and Waffle with Spiced Pear butter and Habanero Maple Syrup.  The cornmeal waffle proved to be a bit of a challenge for Bunny, as it was very heavy and dry, yet lacking in flavor.  "I supposed that's why they pair it with such exotic condiments," she said.  The rabbit was very well cooked, with a crunchy and slightly spicy outer crust and juicy meat within.  Brandy could not get over the feeling of witnessing an act of cannibalism, watching Bunny eating bunny, so her eyes wandered to the television scenes above the bar where the previous night's baseball highlights were being played.
For all of its fluff and bother about being unique, Frontier remained firmly on the side of average on just about every level.  Service was a tad rushed (once the mimosas were finished, no one ever came to see if they would like a second, but bus boys were always on hand to clear empty dishes straight away), the interior didn't quite match the sophistication of the menu (both Our Ladies decided it was most definitely meant to please more masculine tastes), and though the choices sounding varied and interesting, they proved to be nothing more than...well...just your average brunch.  Bunny decided that the next time she found herself craving some big game, she might as well go out and shoot it herself. 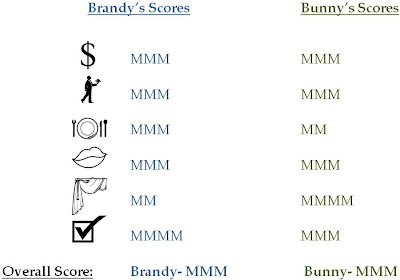 Posted by Bunny and Brandy at 8:23 AM