Owen and Engine or Fit for a Queen 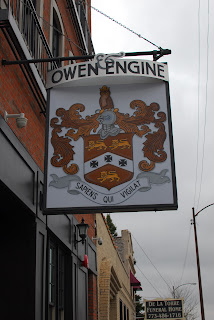 An interesting piece of mail presented itself to Bunny and Brandy's mailboxes a few weeks back; their much anticipated invitations to a certain royal wedding.  Not many know that Bunny and Brandy, long ago in their youth, played nanny to a certain prince (no, not William, Prince Phillip, if you must know), and so they are much beloved by everyone at Buckingham palace, both royal and gentry.  In preparation for this most happy event, Our Ladies spent a good 4 hours hat shopping (an essential item at any British wedding), so when it came time for brunch, they had worked up a pretty good appetite. 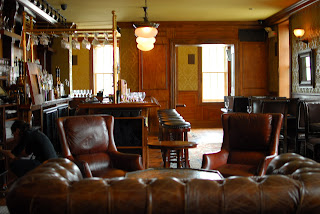 Whispers had reached Bunny and Brandy about a certain new pub that claimed to be serving up the most authentic British food anyone could find this side of the Thames.  "We'll be the judge of that!" Brandy proclaimed.  So after their excursion at the haberdashery, Our Ladies headed over to Owen and Engine with eyebrows pre-set in a sceptical expression. 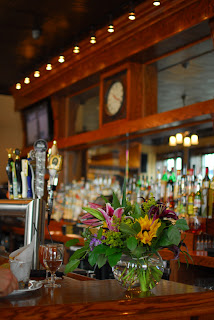 Obviously knowing they had VIP's on their hands, Bunny and Brandy were taken up stairs to a beautiful dining room, set with plenty of dark woods, flocked wall paper, leather backs arm chairs, and a fire place.  An impressive show, to be sure, only made more impressive once they were told that the owners had designed the place themselves.  "Reminds me of Noel Coward's drawing room," Brandy mused.  "No, no, you're thinking of Cole Porter's den, dear," Bunny corrected her.

The menu did indeed look promising.  Right off the bat, Our Ladies ordered a concoction called Mum's Punch, a mix of rum, cherry brandy, port, and some lemon.  At first sip, Bunny exclaimed that she could imagine drinking this refreshing beverage on a balmy summer day, while Brandy said she could see enjoying it at a lovely Christmas party.  Nicely spiced without too much sweetness, however enjoyed, it was definitely a hit.  The eyebrows began to lower. 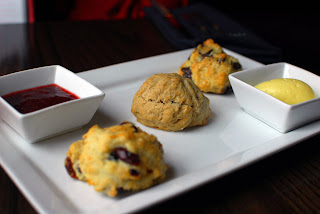 Next came their starter, a plate of freshly baked scones accompanied by clotted cream (Bunny squealed with delight when she saw this on the menu) and strawberry jam.  Our Ladies were presented with a plate containing three different scones; a chocolate chip, an Earl Grey, and a cranberry orange.  All were delightfully warm, crunchy on the outside, and soft on the inside.  Bunny enjoyed the cranberry orange the most (though how she could taste the scone under a giant glob of clotted cream, we do not know) while Brandy favored the slightly denser texture of the Earl Grey. 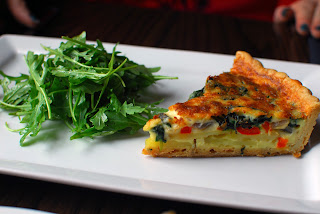 Brandy decided upon the seasonal quiche as her entree, which came dotted with Yukon gold potato slices, spinach, red pepper, and cheddar.  The filling was very light and the crust was delicious and buttery.  Brandy had at first regretted her choice and wished she had ordered something more British, but the addition of the potatoes somehow brought the flavors home to Old Blighty.  The side salad however was disappointingly plain, only being a tangle of greens with dressing.  Brandy felt that even a sliced cherry tomato and a few slivers of cheese might have made it a little more enjoyable. 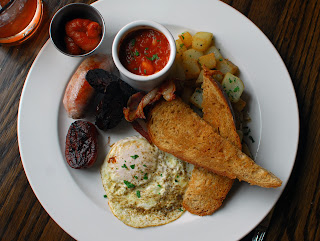 Bunny opted for the English Fry Up, an amazing array of traditional English breakfast items that included baked beans, blood sausage, roasted potatoes, bacon, eggs, and brown bread.  "If they bring me a fried tomato,  then perhaps they really do know what they're doing," Bunny whispered.  She did indeed get her tomato, but something else was missing.  Bunny summoned the lovely waitress, thinking to trip the poor dear up.  "Do you have any brown sauce?" she cooed, "It's just not a fry up without brown sauce."  The waitress smiled and disappeared for a moment behind the highly polished bar before bringing back a small cup to the table.  Bunny looked at her quizzically.  "We make it in house, mam," she said.  Our Ladies jaws collectively dropped.
Once equipped with the proper condiments, Bunny dived in head first.  The beans came severed in an adorable ceramic cup that resembled a baked bean can.  They were very firm and pleasantly tomatoey.  The blood sausage had a good smokey flavor to it and the potatoes were very flavorful without being too greasy.  Bunny was indeed appeased. 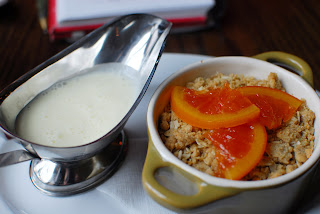 As one final test, Our Ladies chose to order a Rhubarb Crumble for dessert.  Served hot with a boat of cold creme anglaise on the side, before the first bite was even consumed, Our Ladies had to admit that Owen and Engine was their new favorite spot (in fact, once Brandy found out that the owners lived upstairs, she inquired as to whether they had a guest room they might be willing to rent out).  Our Ladies let themselves fall into the warm puddle that was the rhubarb crumble, joyous in it's citrus notes, which were enhanced by the candied oranges on top, and overwhelmed by the richness of the creme anglaise.
After finishing their meal, Bunny and Brandy lingered, asking about everything from the furnishings to the hand pumped ales until they were escorted down the stairs and taken to the door.  Still they lingered, gazing through the windows like two cockney street urchins, longing to be out of the cold.  Needless to say, after they have arrived back from attending the royal wedding, Bunny and Brandy will be carving themselves a place as regulars at this amazing new find.  Batton down the hatches, boys, Our Ladies are here to stay!
The Short and Sweet Review: 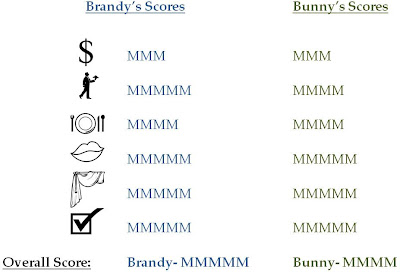