Socca or Do you know what I know 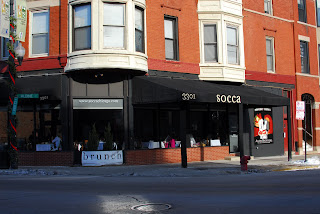 Yet again, Our Ladies tried their hand at that particular Bucktown haunt with the bread-based moniker, and yet again they were told to expect an extraordinarily long wait.  “I didn’t wait for the Prince of Wales to call for a second date and I’m not waiting an hour and a half for brunch!” said Bunny.  Bunny’s unusual show of moxie was due to her wanting to impress her brother, who was joining them that morn in addition to Biscuit Brown (“Birdie isn’t allowed to come to brunch until he apologizes for calling my mother a Yankee scoundrel,” Biscuit explained about the absence of her husband, “He insists that anyone born North of Tallahassee is a Yankee!”).  Bunny’s brother, here to be known as Mr. Bacon, is a former (or possibly current) agent of MI5, and therefore has to be carful not to reveal too much about his true identity.

After a short drive, Our Ladies and guests noticed a banner on the corner of Aldine and Clark proclaiming “Brunch!” and decided it was worth investigating.  After Mr. Bacon had secured the perimeter, Our Party entered Socca, a Mediterranean inspired bistro, that has only very recently begun serving brunch.  The unassuming entrance leads one past a rustic, dark wood bar, the open kitchen, around the corner to the hostess stand, and finally into a wide open sunny room.  Our Ladies were frankly shocked to see such an elegant room with almost no one in it, especially considering the improbable wait time that was given at their previous stop.

Their waitress presented a plate of fresh baked scones and orange slices along with their water.  The scones were warm and citrusy, almost more cookie like in texture.  A round of mimosas were ordered (expect for Mr. Bacon, who ordered a Grey Hound, shaken, not stirred) while Our Ladies perused the menus.  For Brandy, vanilla croissant French toast and a side of polenta “cheese grits.”  For Biscuit, some pork belly potato hash and eggs.  For Mr. Bacon, a simple omelet made with tomato and spinach.  And Bunny, as always the adventurous soul, ordered the crab cake Benedict. 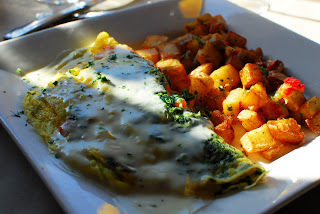 Mr. Bacon’s omelet tasted of fresh, well cooked spinach, and was doused in a light, creamy cheese sauce.  To the side were some standard diced potatoes.  It was hard to gauge his expression from under his dark sunglasses, but Bunny thought she caught a flicker of a smile on the corner of his lips as he munched. 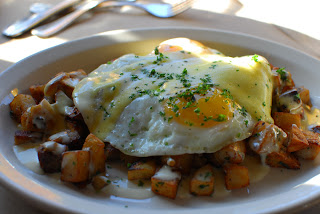 Biscuit, who downed three mimosas all by her lonesome, devoured her pork belly hash with relish.  She had never had pork belly until that day, but at Brandy’s urging (“It’s essentially thick cut bacon,” Brandy explained, to which Biscuit’s eyes grew as big as saucers) she happily received her rustic plate of hash and over easy eggs.  Hearty and not overly greasy, the dish helped to combat the effects of the mimosas on delicate little Biscuit. 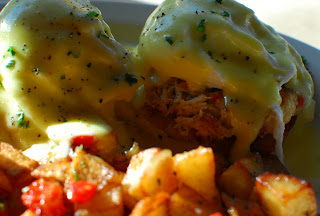 Bunny’s crab Benedict was a vast improvement over Ann Sather’s.  Real crab meat mixed with wonderful spices and served traditional style over Canadian bacon and an English muffin, Bunny was very happy indeed.  The Hollandaise, she reported, was vaguely sweet, but very light and not overpowering to the rest of the dish. 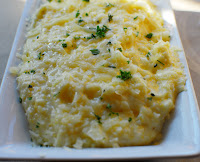 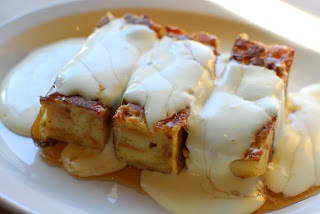 Brandy was glad she has ordered the side when her French toast arrived, as the portion size seemed a bit small, especially considering it was one of the more expensive meals on offer.  But upon slicing into the confection, its densness revealed the reason for its small appearance on the plate.  Thick and rich, as it was covered in a sabayon and vanilla gelato, the dish would have been just as at home on a dessert menu.  The “Cheese Grits” were light and fluffy and bursting with parmesaney goodness, and actually made a nice contrast to the richness of the French toast.
The moral of the story is a long wait does not a delicious brunch make.  All told, about $25 was spent per person, and that included drinks.  Our Ladies suggest you run to Socca for a lovely holiday brunch before word gets out and the wait starts to form.  Mr. Bacon mentioned something about recommending Socca to his good friend, the President of… but stopped short of revealing any more information, least one of Our Ladies be put into mortal peril.
The Short and Sweet Review: 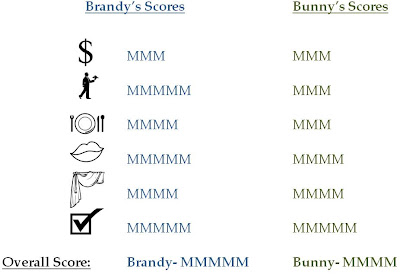