Luella's Southern Kitchen or Going South for the Winter 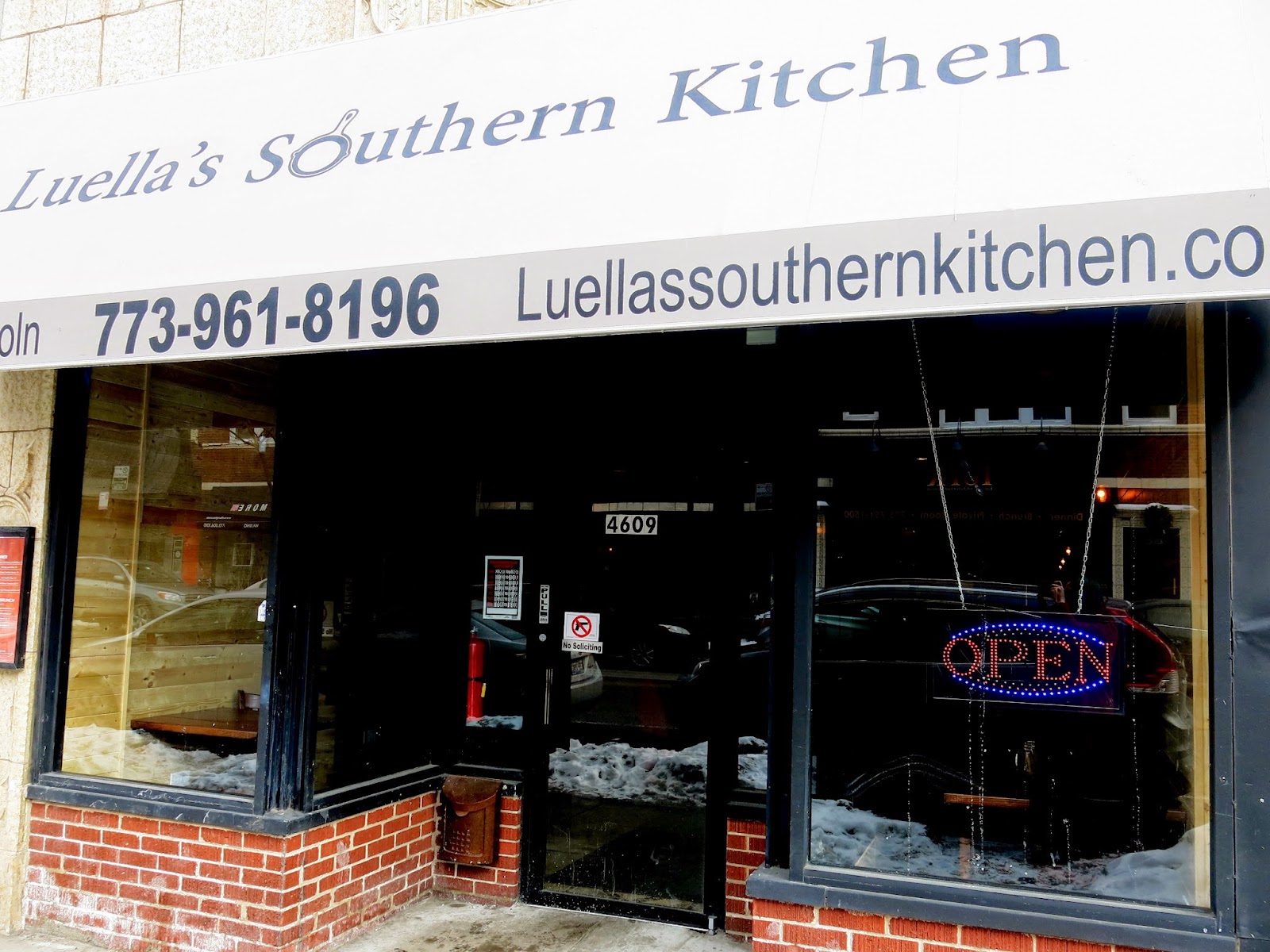 As the last days of winter are dragged out kicking and screaming by the Chicago spring, most residents of the Windy City can find themselves resenting every layer of clothing they are forced to put on, praying for the day when they can at last leave the house wearing only one pair of socks.  It's days like these that Brandy feels the need to remind herself that some day soon the graying snow will melt, the sidewalks will no longer be icy death traps, and the lakefront will eventually be teaming once more with bicyclists, runners, and harried dog walkers.  "I enjoy a bit of wintery weather, but Chicago does like to take things to extremes," Brandy likes to say, "It's little wonder there so much Southern American food about this city to help remind the residents that there are warmer climates elsewhere and they will soon be here too."

One such restaurant new to the icy landscape is Luella's Southern Kitchen in Lincoln Square, recently opened by chef Darnell Reed, a veteran of the Chicago hospitality scene from such places as The Palmer House Hilton and The Conrad.  Chef Reed, a native to the South Side of Chicago, took inspiration from his Mississippi born grandmother, for whom the restaurant is named, designing a menu full of Southern comfort favorites to warm to hearts and minds of Chicago's shivering foodies.  Craving some good old Southern hospitality (and spice), Brandy headed down to Luella's the first chance she got. 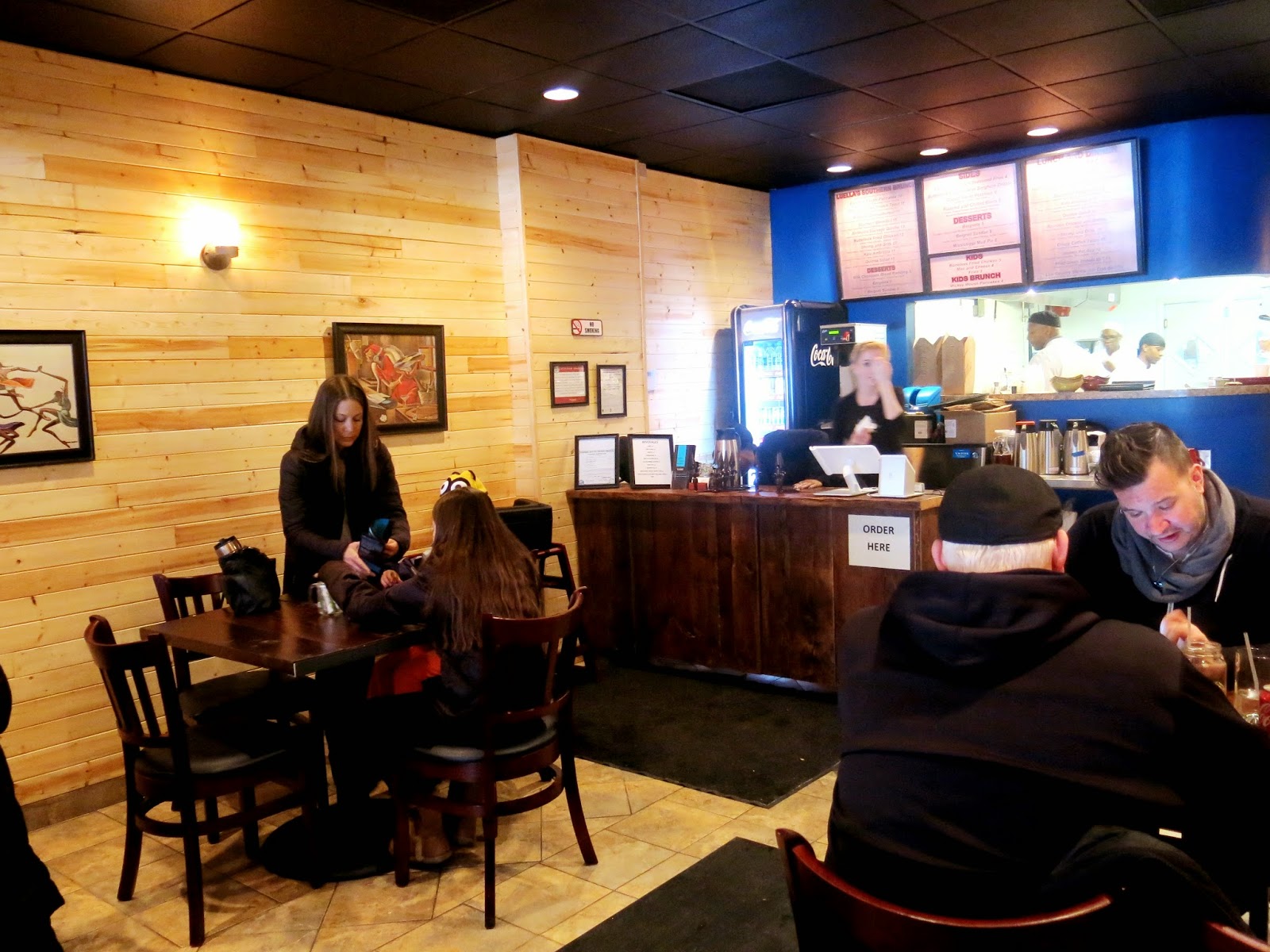 Luella's was at once both casual and a little formal; the walls were wood paneled and the servers that bustled about the space were clad in all black, but the place was set up to have patrons order and pay at the front of the restaurant and then have their meals delivered to their tables straight from the kitchen.  Brandy wasn't quite sure about this system, but as she put it, "There is something to be said for being able to simply rise from your table at the end of a meal and just walk out the door."  A soundtrack of Motown classics also brightened the atmosphere, creating a very happy, homey, and energetic feel. 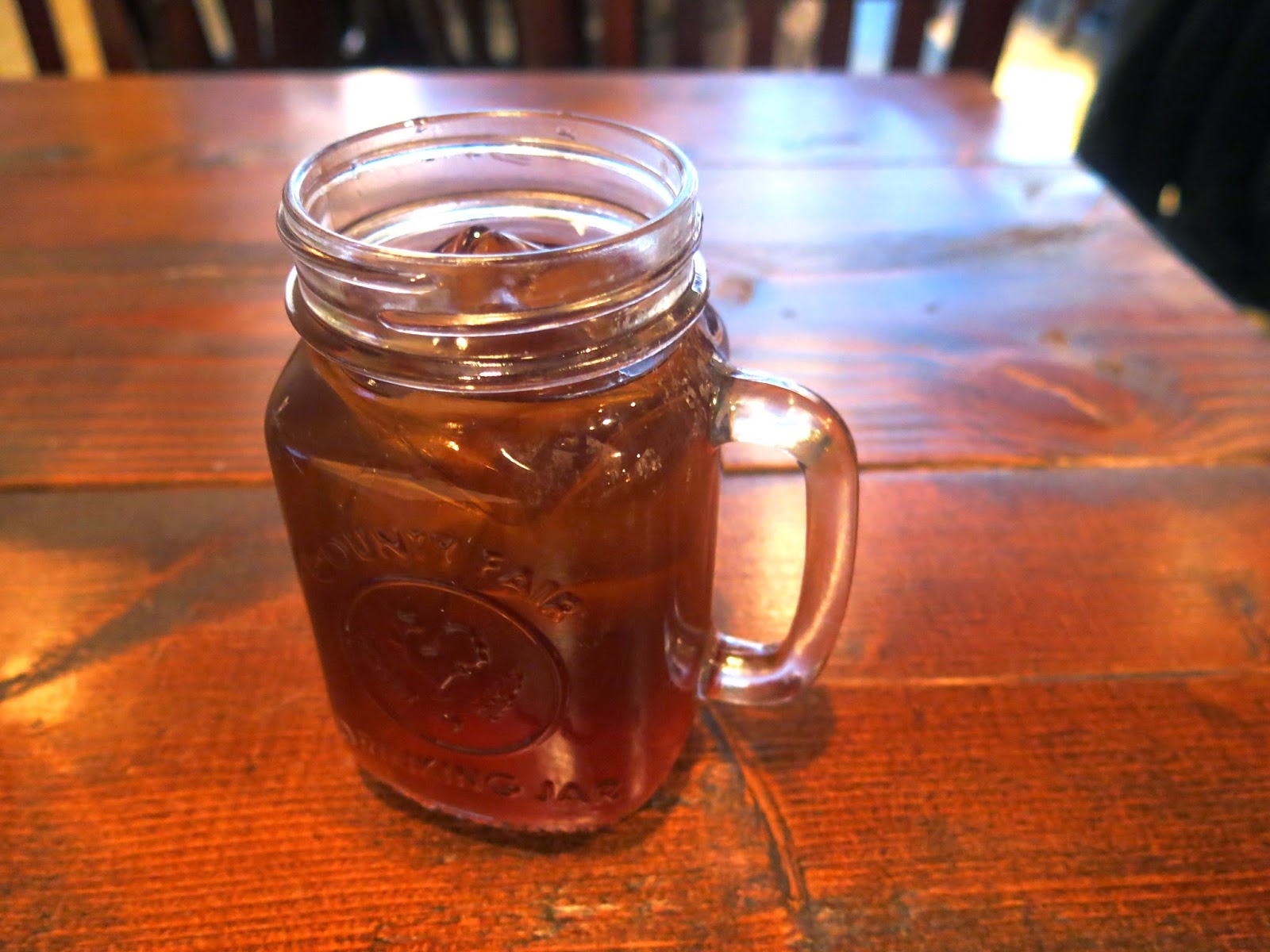 Brandy started off with some traditionally Southern Sweet Tea, which came served in an adorable miniature mason jar.  Being British (and therefore a connoisseur of all things tea), Brandy very much enjoyed the beverage, though the thought of having some of her other ex-pat friends give this a sip sent her into a fit of giggles.  "Southern sweet tea is a sort of acquired taste," she said to herself, "It can be the most delicious thing in the world, but you have to be prepared for it.  When they say sweet, they mean sweet!" 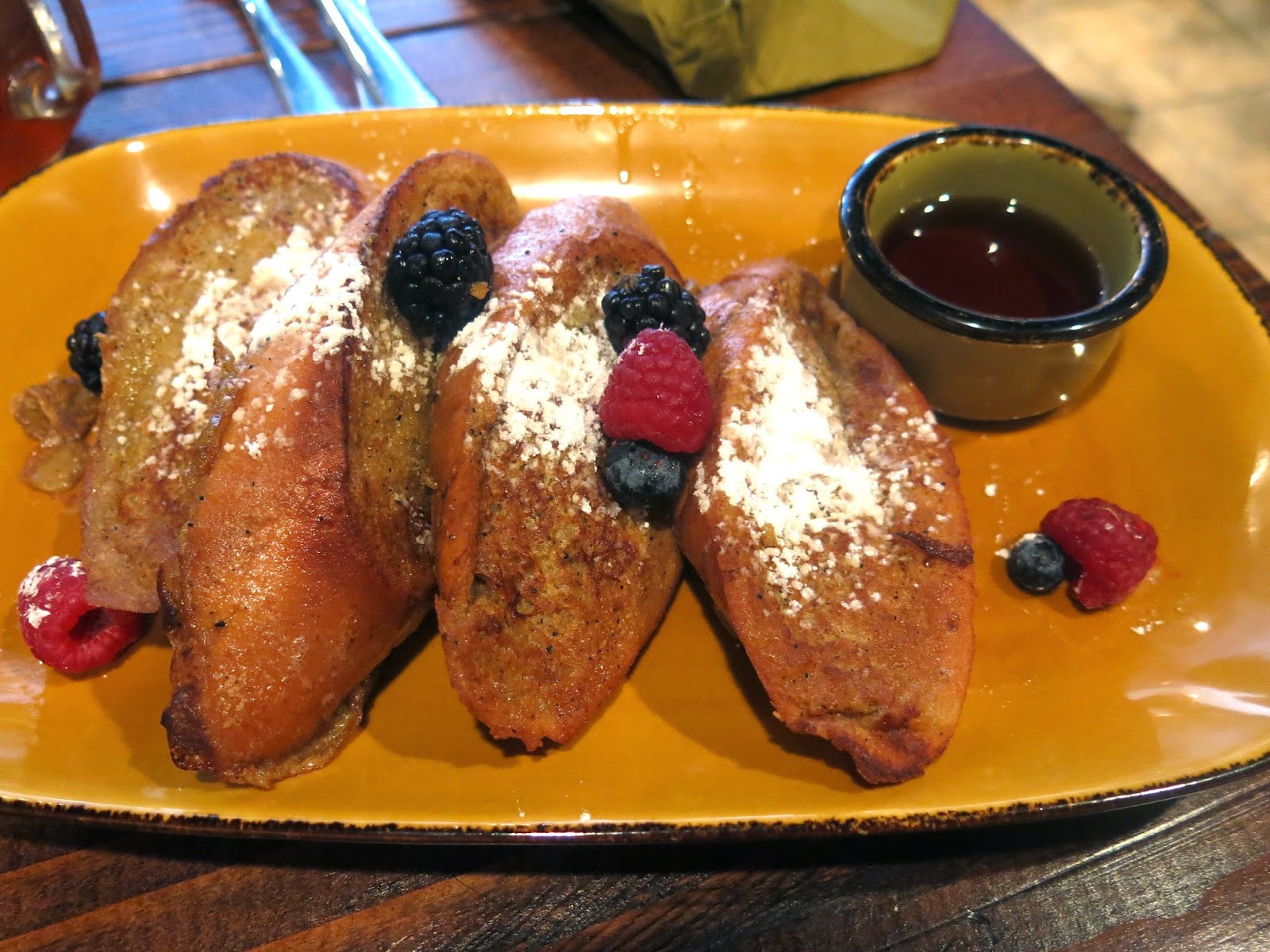 For her sweet entree, Brandy ordered the intriguing sounding Chicory Coffee French Toast.  The toast seemed to have been cut from a baguette, making it a little denser and more substantial than some French toasts Brandy has tasted in the past, but the flavor was very very subtle.  Brandy definitely did get a little hint of the coffee, but the chicory flavor was for all intents and purposes non-existent.  "I can see someone who wants a traditional French toast being very happy with this," as Brandy put it, "But for me, I would have liked a bit more punch.  A little more bang for the buck, if you will."  The texture of the toast, however was spot on, and the accompaniment of fresh tangy berries made for the perfect topping. 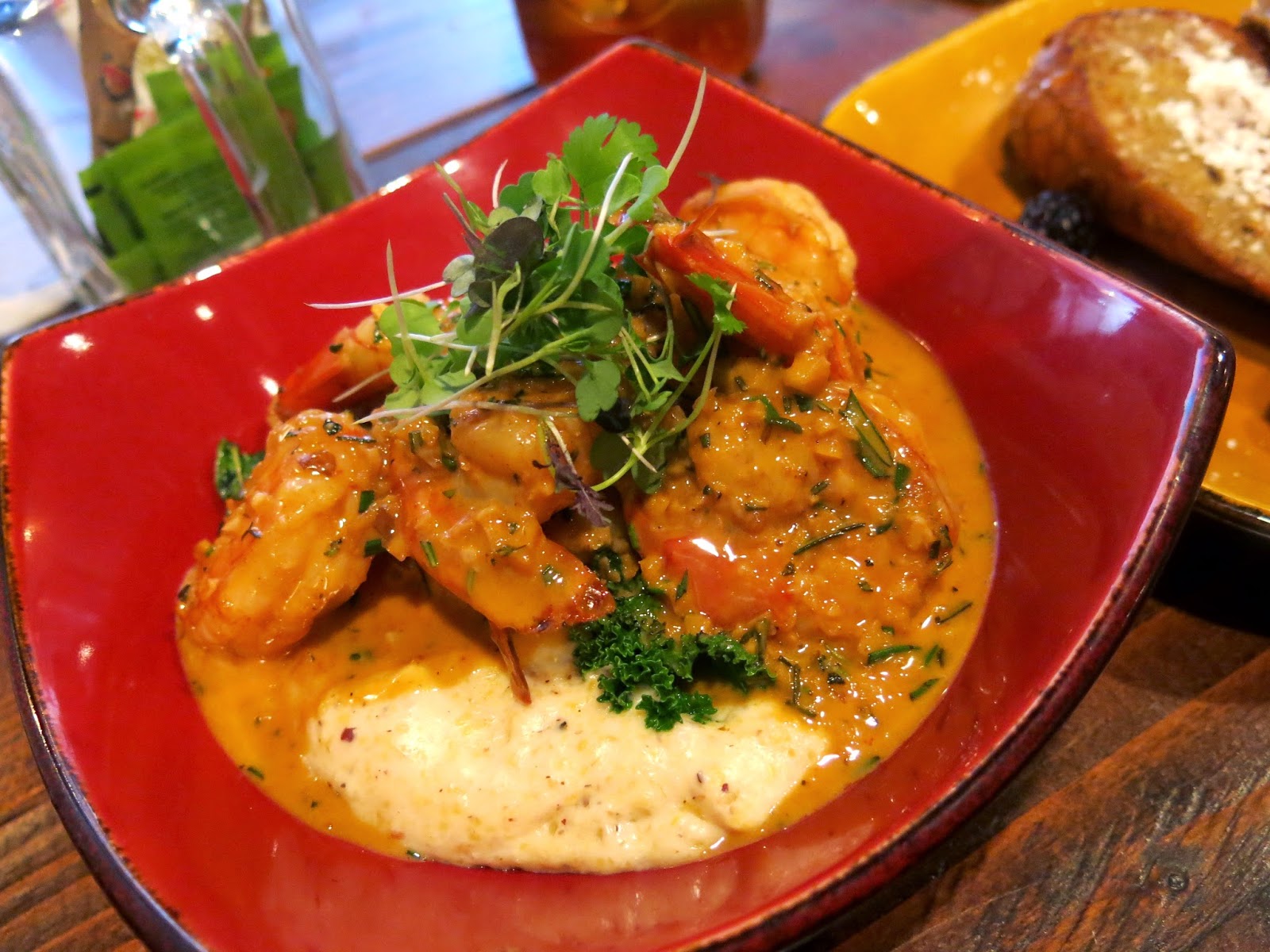 Moving onto the savory entree, Brandy dug into an order of Shrimp and Grits.  Right away, she could see this version of the Southern classic was miles above other similar dishes she has had in that it contained a mountain of substantially sized shrimps.  "Most of the time, you're lucky if you get three or four, but this is a veritable school of shrimps!" Brandy exclaimed.  The shrimps were of good quality too, nicely cooked and cleaned with care.  The gravy that en-robed them definitely had a kick to it, one that took Brandy back a little bit at first, but she found that once she was prepared for the Cajun spices, she absolutely adored them.  The grits too were absolutely perfect with a nice bit of bite and texture to them as well as a rich creaminess that came from the addition of cream cheese.  The sauteed greens that popped up from forkfull to forkfull were a just the delicious gilding on the lily that convinced Brandy that this was most certainly the best shrimp and grits she had ever had.

Brandy left Luella's with a happy, wistful smile on her face.  The warm inviting atmosphere and lovingly made food had done wonders to lift her spirits, and the fact that the prices in general stayed well below $15 a plate insured that her wallet was as full as her stomach.  "There are many things I dearly love about this city," as she put it, "And one of those things is the fact that not only is Chicago a melting pot of international flavors, its also an intersection for all of the United States.  Sometimes I think a true lover of Southern food would be hard pressed to find more authentic fair outside of that region than right here in the frozen tundra of the North that we call home."

The writers of this blog were invited to dine by the restaurant at no charge in exchange for an honest review. 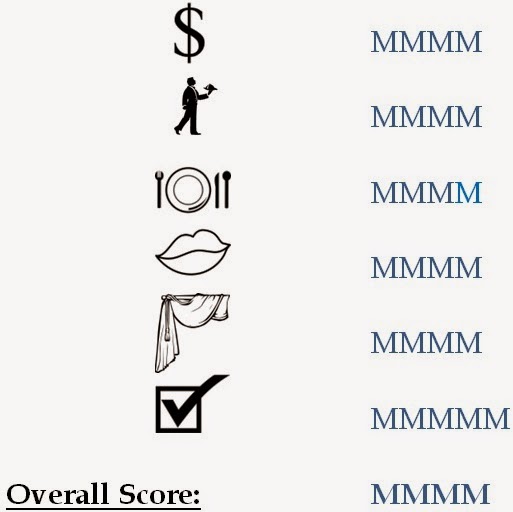