ZED451 or The Bounty of the Harvest 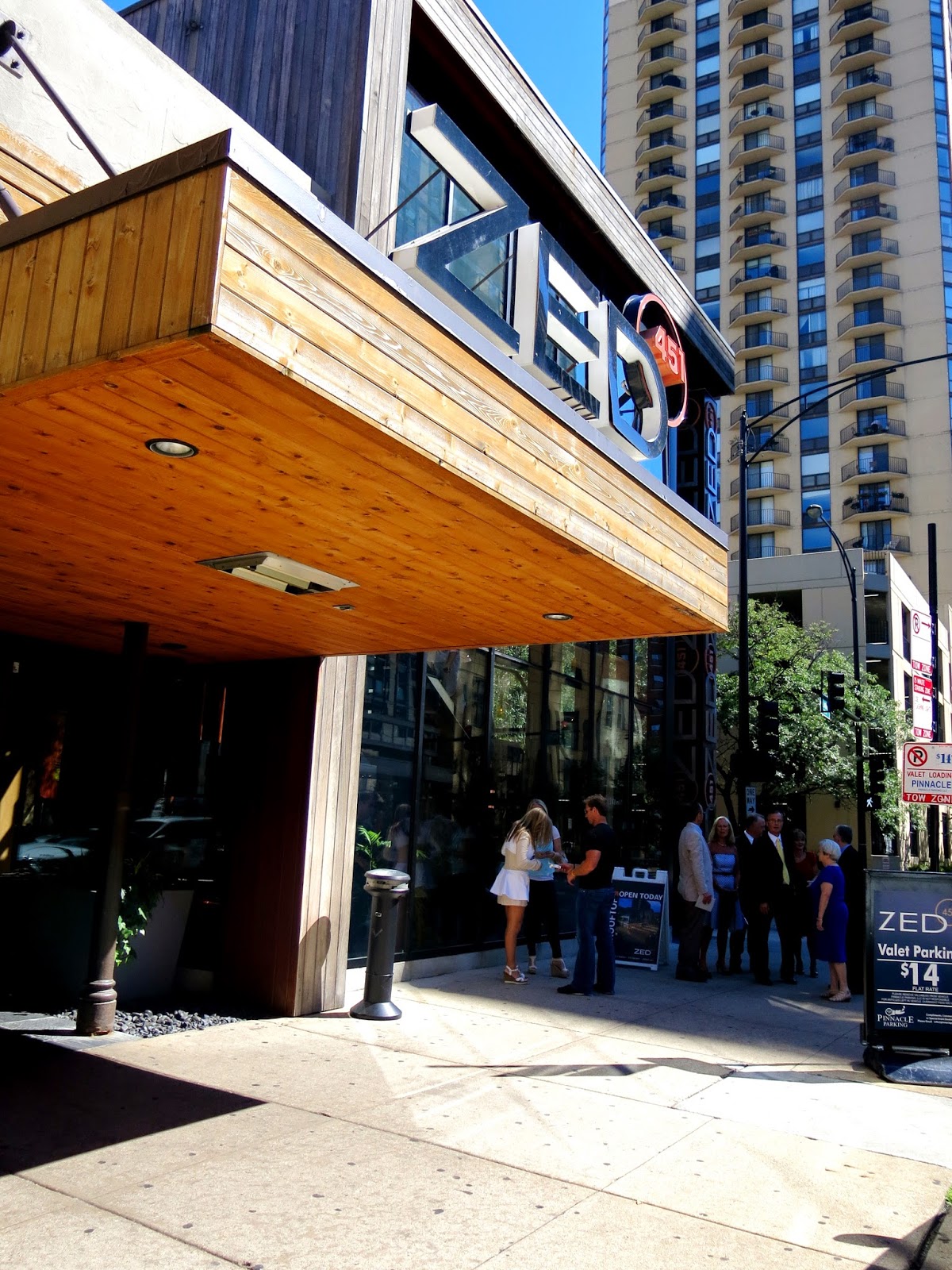 Brandy has survived a lot of things in her life.  At one time in her life, avalanches, earthquakes, train derailments, jumping out of planes, off of buildings, and into canyons were all just a rather mundane part of her day.  But in recent years, she has found herself winding down some and being more content with a good book and a cup of tea as opposed to unexpected adventure.  "I leave the globe trotting to Bunny now," as she says, "She grew up in a convent in Devonshire, so she got a late start in adventuring, but now that she's accompanying Benedict on his archaeology trips, she's getting a good taste of what I already had.  I was born into adventure.  Quite honestly, I was.  My mother went into labor while skiing down the side of a mountain!"

These were the types of stories Brandy was relating to a new friend, one Mr. Bari Bronzo, a muscle bound former personal trainer whom she had met recently at a charity cocktail party.  Mr. Bronzo was just beginning to find an interest in "extreme traveling" and someone had suggested he talk to Brandy about her extraordinary skill in lackadaisically surviving life's little surprises.  "But how do you keep your self prepared for the worst?" Bari asked Brandy.  "Always have a good brunch, of course!" she laughed, "That way you've had a good meal in your stomach that can last through almost anything."  Bari seemed to find this advice amusing, so Brandy challenged him.  "Alright, Mr. Know It All!  You come to brunch with me and I'll show you exactly what I mean!  I have the perfect place in mind too.  ZED451 is infamous for a very indulgent brunch buffet, so if you can make it through that, then you can make it through almost anything!"  "You're on, lady!" Bari responded. 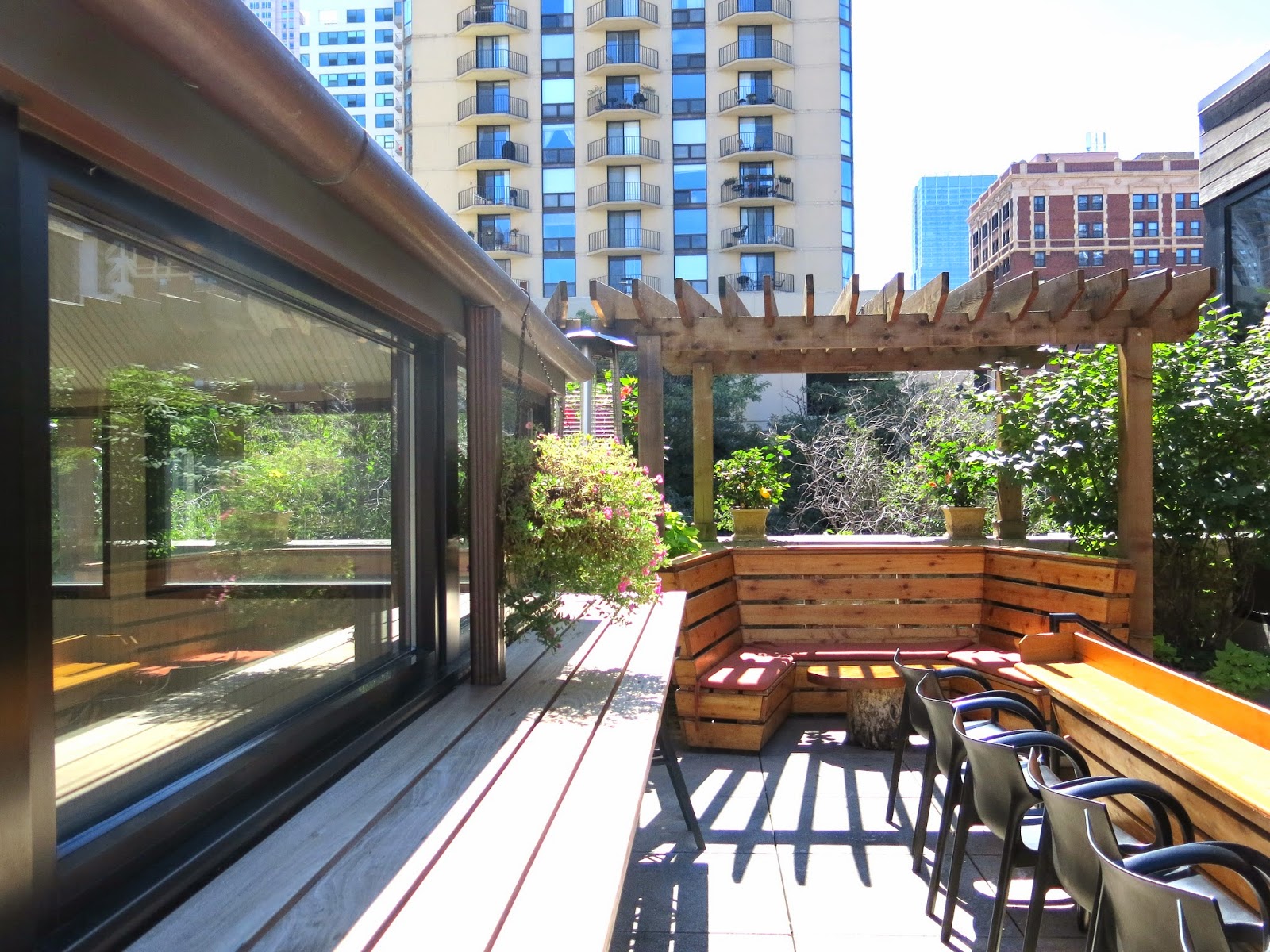 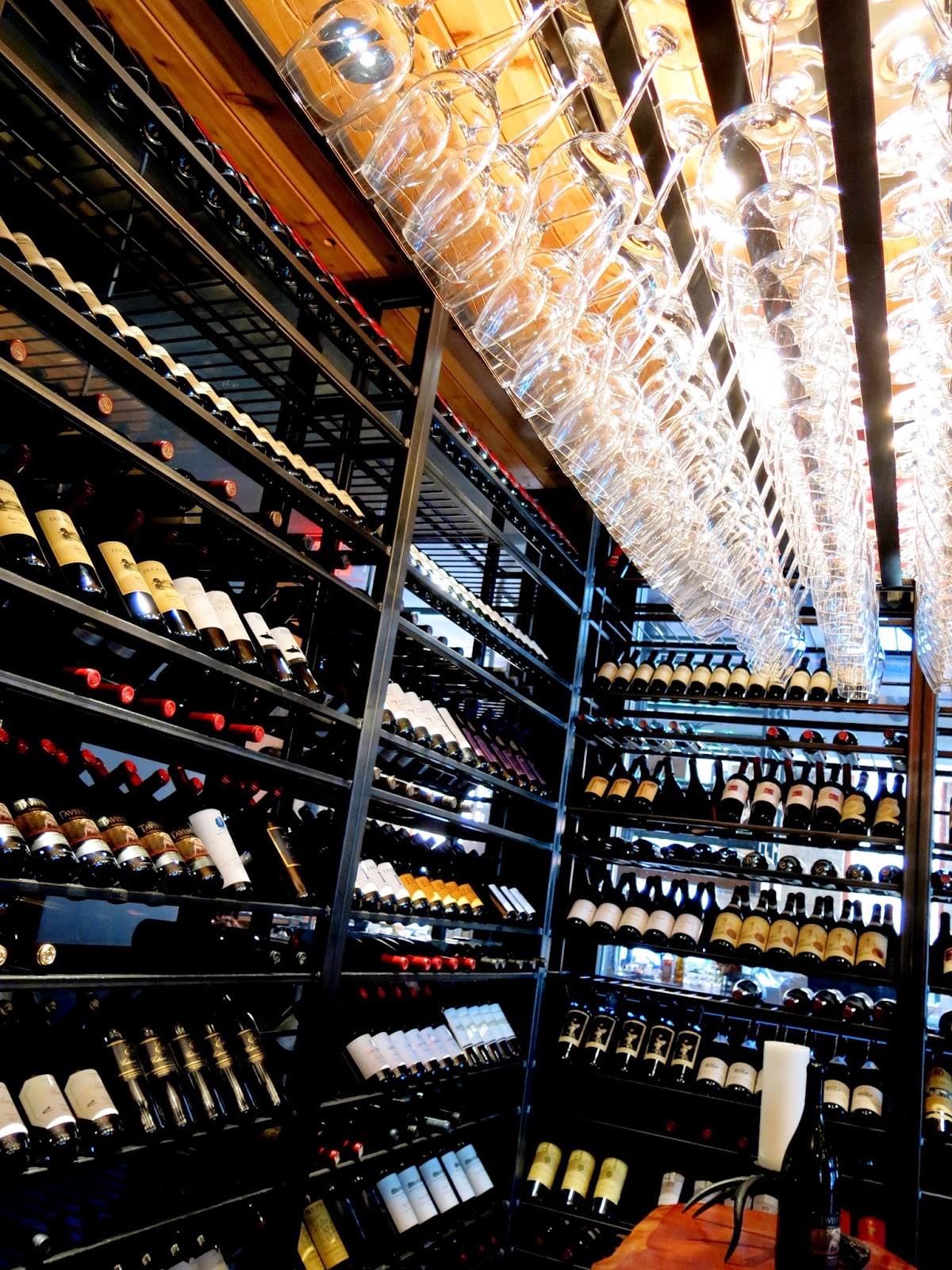 The inside of ZED451 was truly astounding, not just because everything was so polished and pretty, but the actual expanse of the 18,000 space was simply breath taking.  On the ground floor there was a chic lounge with a fire place (fire, Brandy was told, was a major theme for ZED), comfy furniture, and a huge projection wall for showing sports on, as well as a beautiful, intimate wine closet that could easily host a small party of viticulturists for some tastings and sippings while they admired the selection all around them, not to mention toying with the interactive wine glass chandelier.  Upstairs, there was the gorgeous rooftop, complete with it's own bar, which not only gave patrons a stunning view of River North, but also housed a fascinating sky light into the main dining room, which at night would send a warm glow up and out onto the roof.  "Such a pretty spot!" Brandy exclaimed, "I'd be tempted to say that I'd come up here for drinks even in the dead of winter."  "Don't think you'd survive if you came up here during a winter like last year," said Bari, who was admiring some of the foliage.  "I might if  had enough drinks in me," Brandy mumbled.  Also upstairs were several gorgeous event spaces, perfect for small private gatherings, or even full wedding services, complete with ceremony and reception.  Back downstairs was the main dining area, which was already in the full swing of brunch service when Brandy and Bari took their seats. 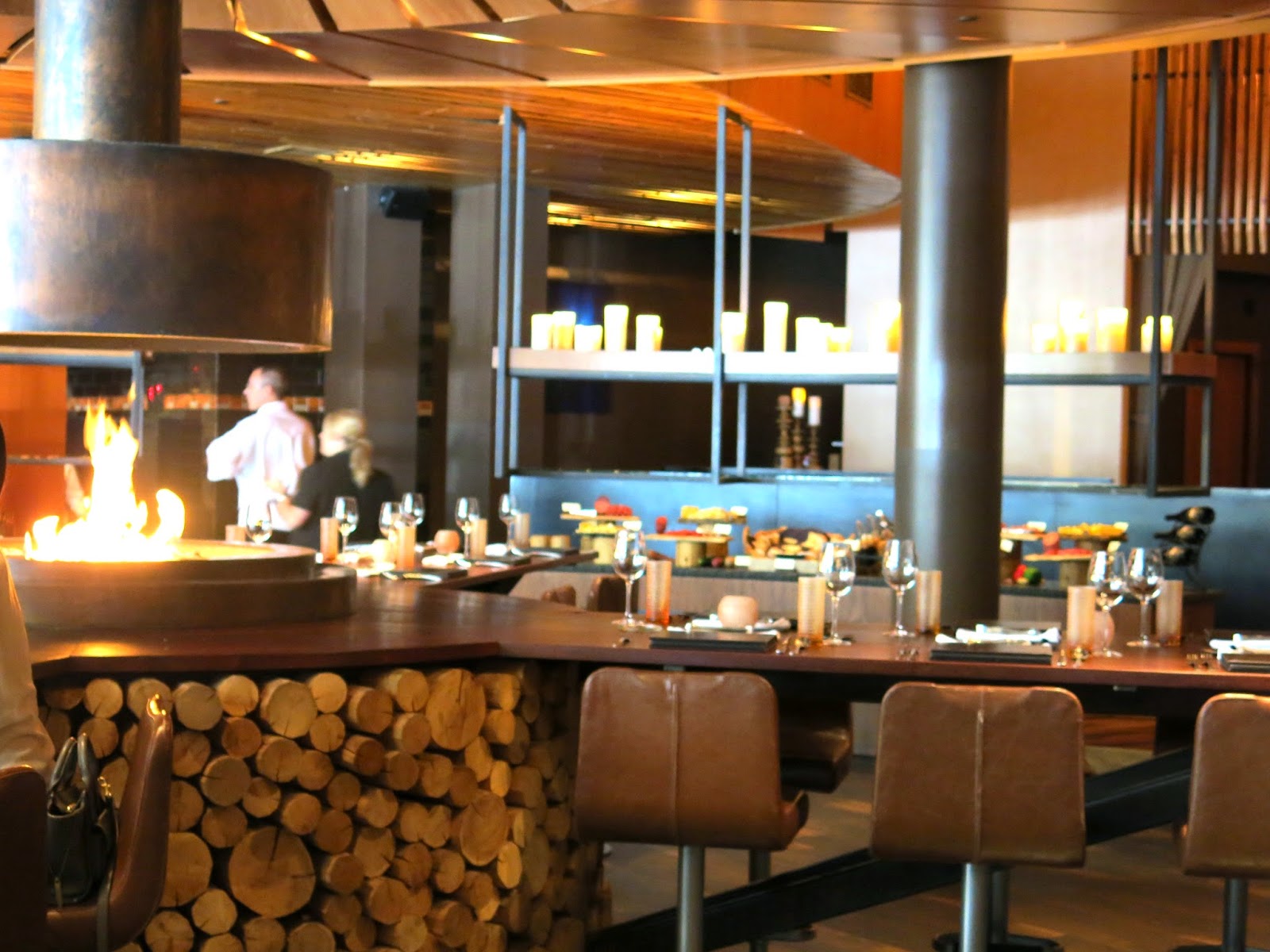 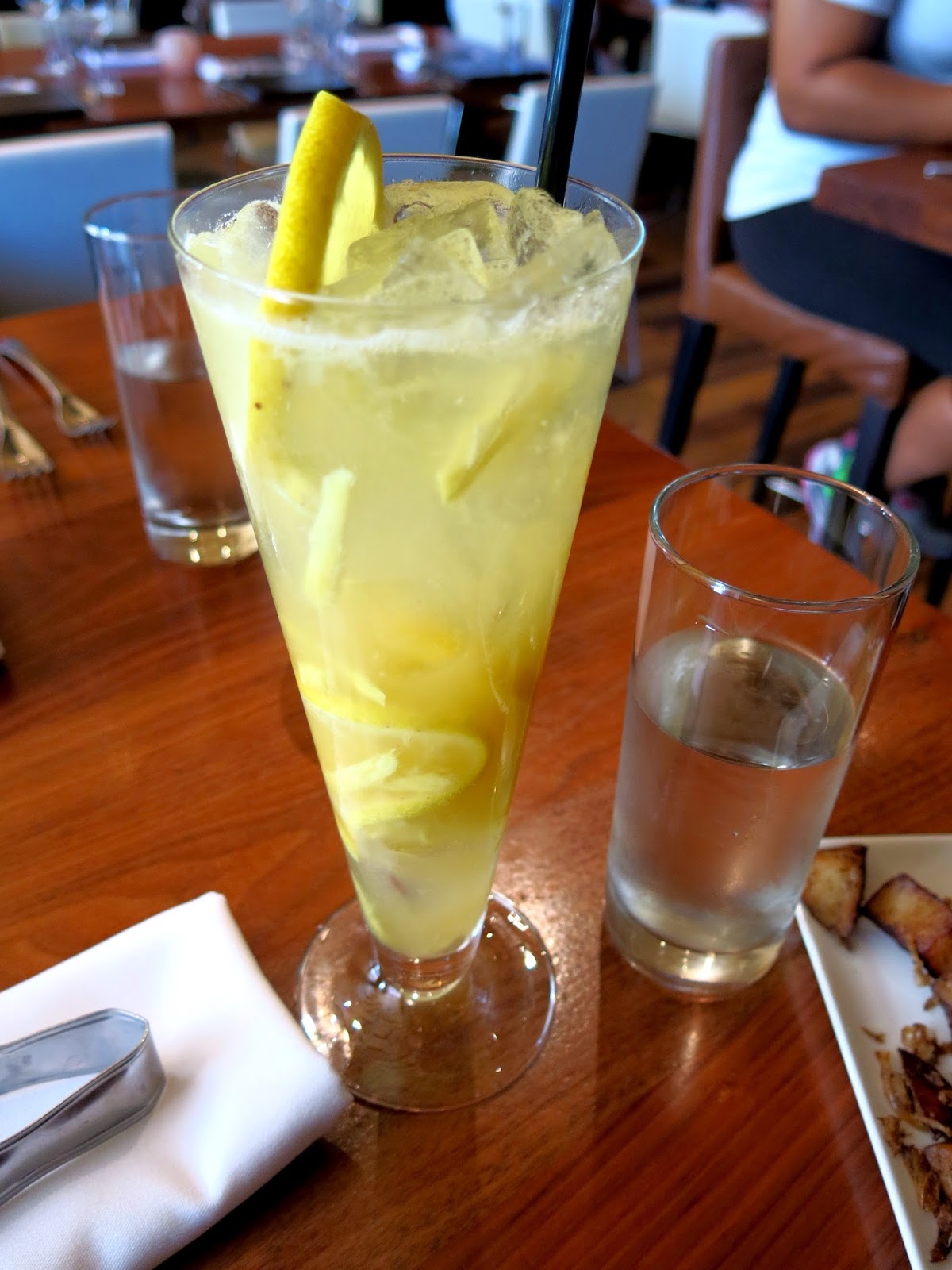 First, they both started off with a glass of the Ginger Bourbon Lemonade.  The lemonade was actually a staple of the menu at ZED, though the flavors infused into the bourbon differed from season to season.  One sip of this refreshing, zingy concoction and Brandy was in love.  "Goodness knows I'm not a huge fan of summer, but I'll be damned if tasting this liquid sunshine doesn't make me a little sad to see it go," Brandy sighed, and the somewhat stone faced Bari agreed. 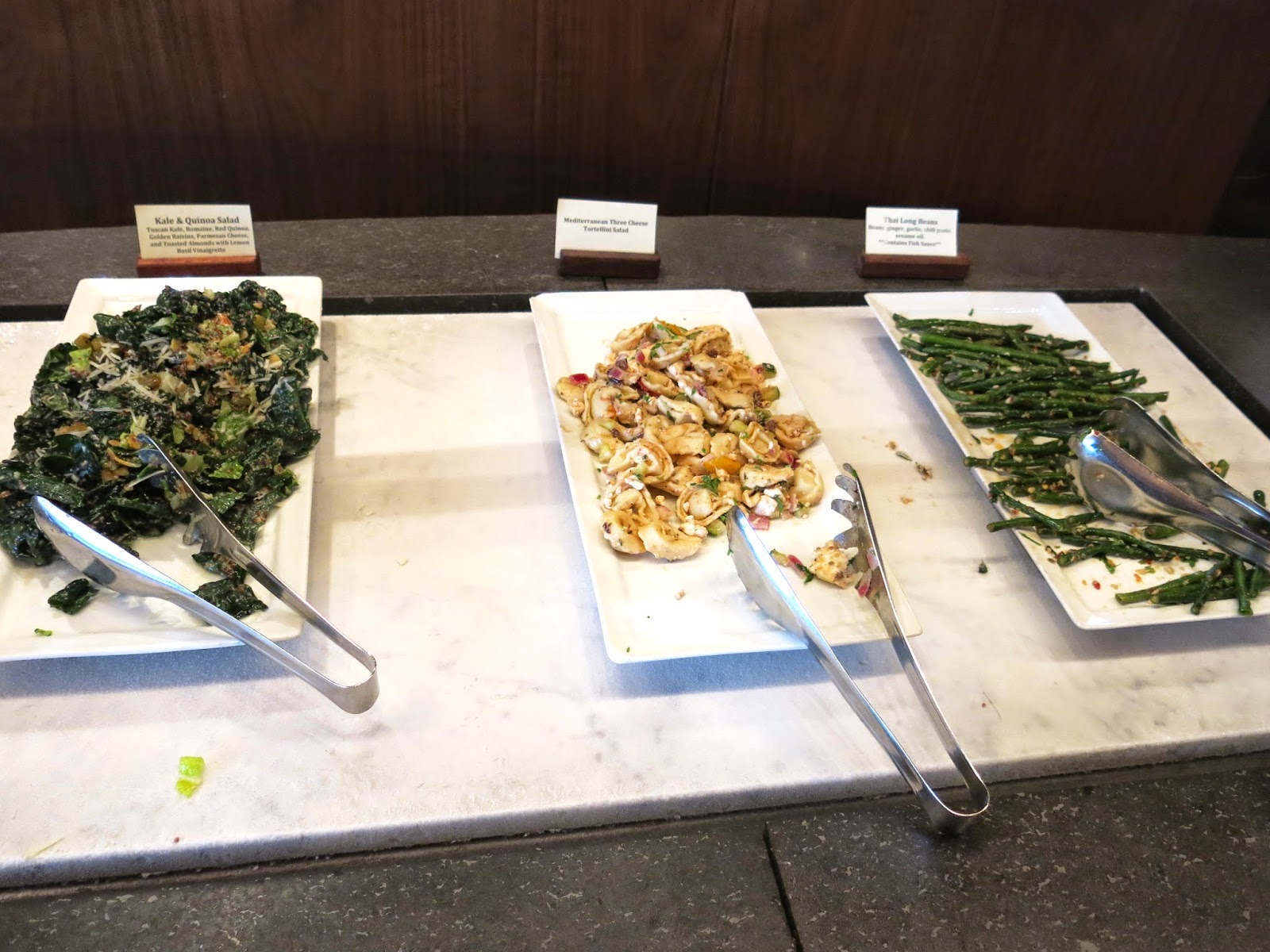 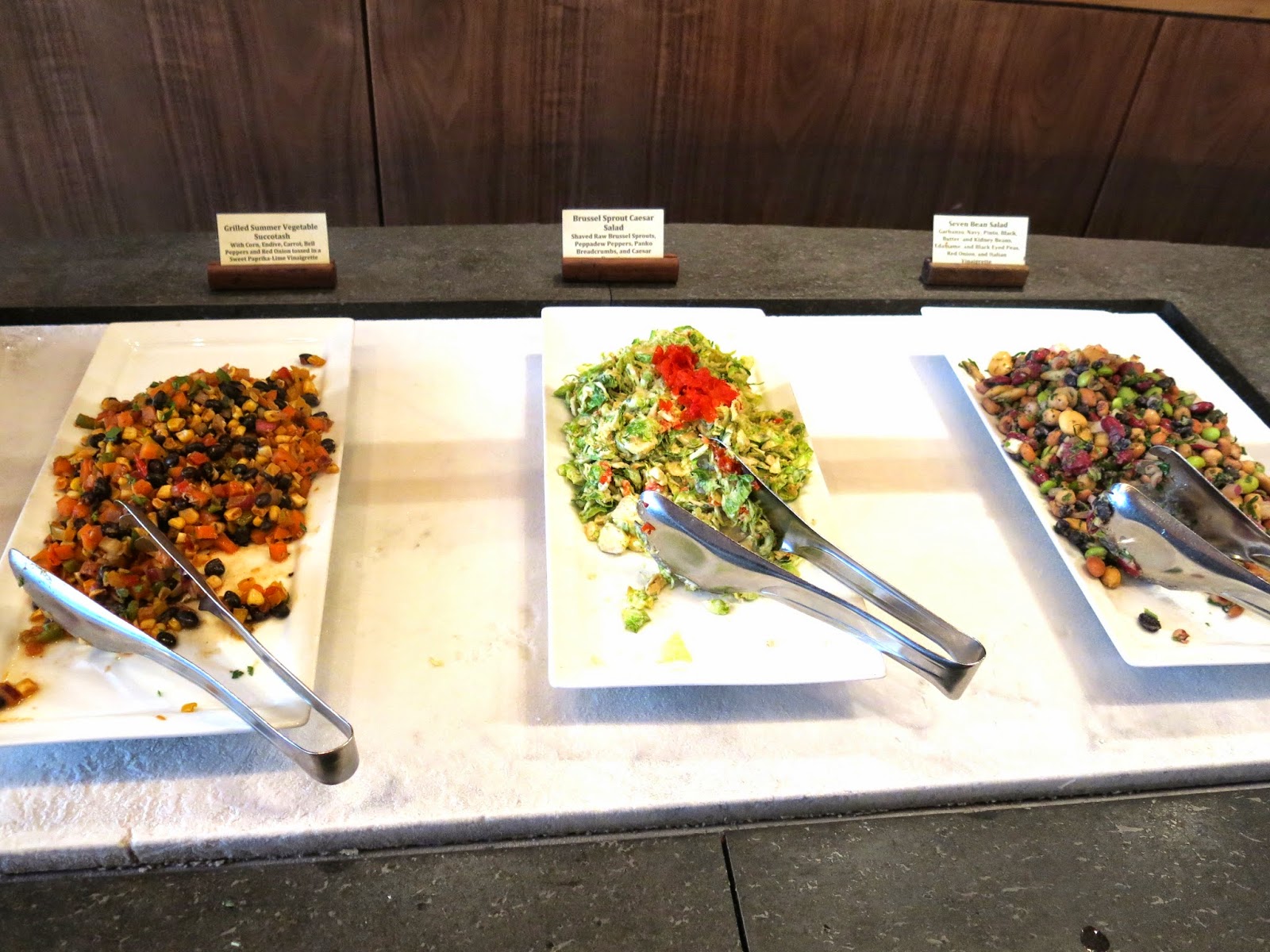 For the first portion of their meal, Brandy and Bari were set loose among the Harvest Tables, which consisted of several segmented curved buffets surrounding a huge circular fire pit, each of which was loaded with plates of salads, cheeses, sliced meats, desserts, and a few hot dishes. Brandy's favorites among the salads were the Sauteed Mushrooms, which were nicely rich and earthy, the Kale and Quinoa Salad, which had a nice nuttiness to it, and the Brussel Sprout Caesar, which was crisp and fresh tasting.  Bari loved the charcuterie table, which was beautifully dressed with a multitude of cheeses, sliced meats, pickles, olives, and other accompaniments.  "I could live on this spicy stuff," Bari said, brandishing a roll of meat at Brandy, "Protein is the key to a filling meal, after all."  The hot dishes on the harvest tables were favorites for both Brandy and Bari: the Vanilla Scented Oatmeal was creamy and hearty, the Duck Fat Home Fries were decedent, and the Panatone French Toast was eggy and full of fun textures. 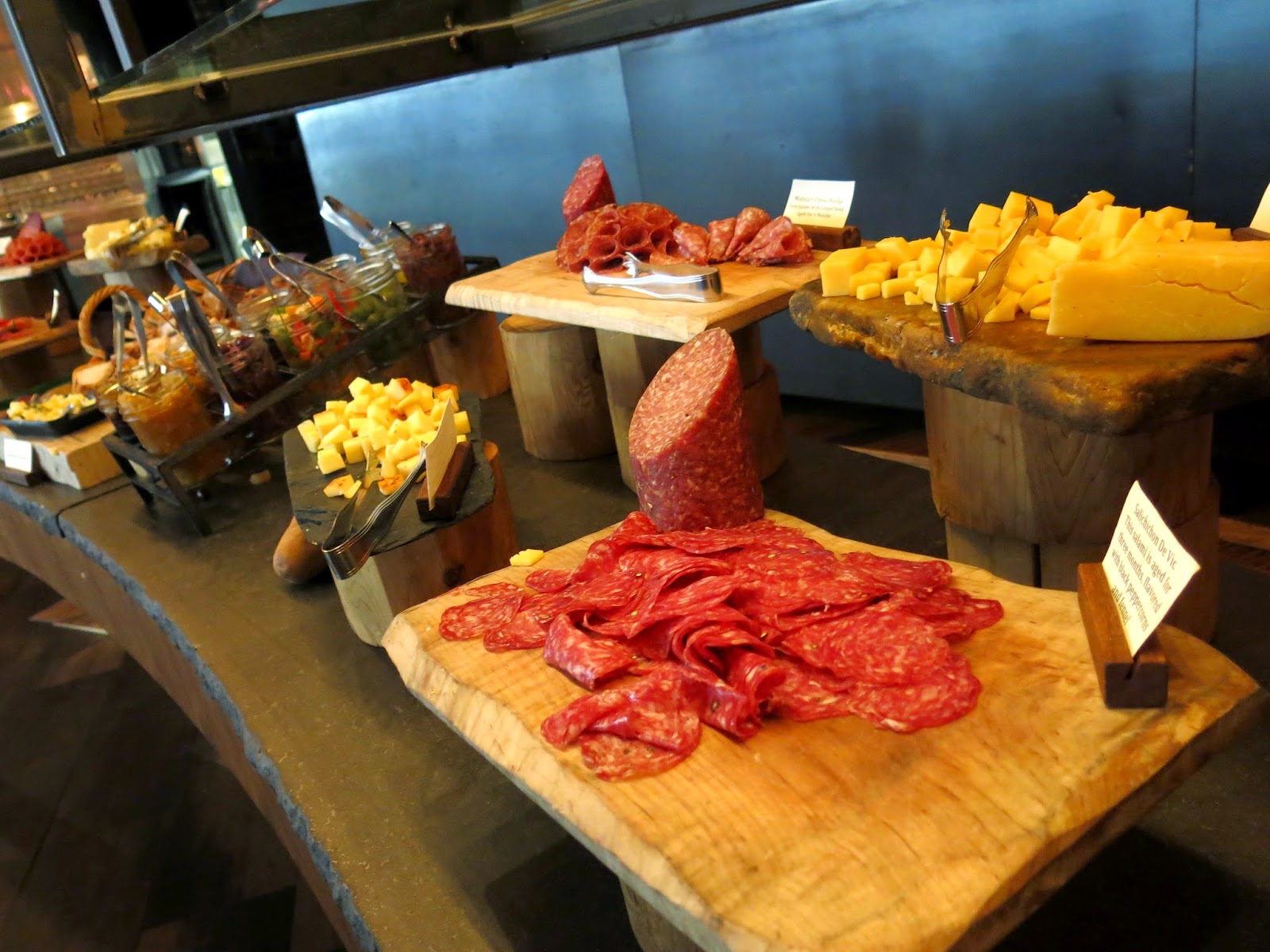 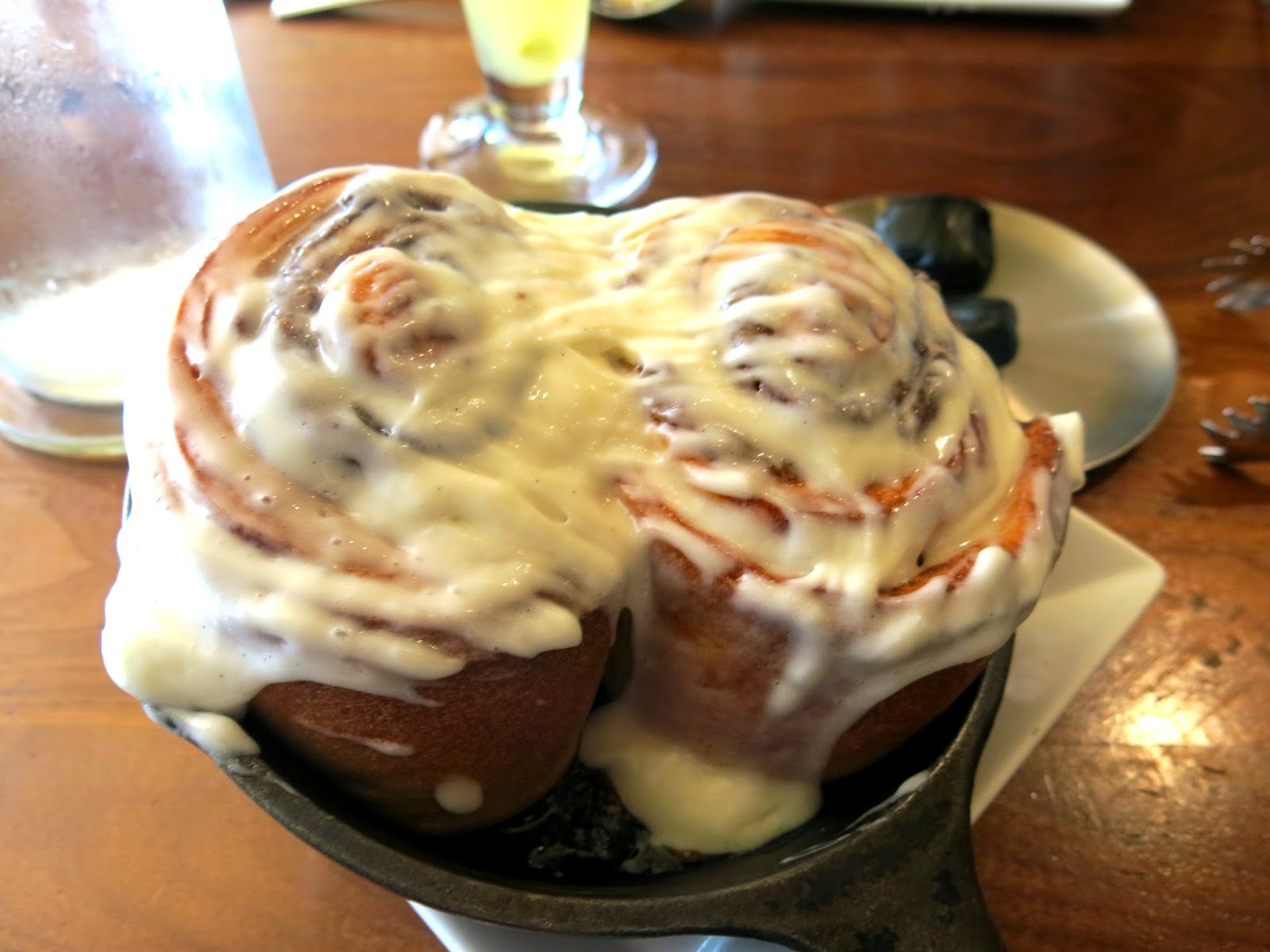 Then the "sides" started arriving at the table.  These consisted of a few hot dishes brought directly from the kitchen.  The Tomato Basil Fritata was herbaceous and fluffy, while the Cinnamon Rolls envied Ann Sather's in both size and flavor (Brandy was so overwhelmed by food that she resorted to digging into the doughy center of her cinnamon roll to enjoy the best part of it's raisiny goodness).  But the true star was the Maple Cajun Bacon,  This, we assure you, was not your average side of bacon; this bacon was thick cut (hand cut, in fact, by the chef every day), coated in a secret Cajun spice blend, then doused in maple syrup, and served to crispy perfection in a cast iron pan.  Brandy and Bari stopped mid conversation as they both put that bacon to their lips and did not speak again until the entire pan was empty.  "That," Brandy breathed at last, "Was the single best piece of bacon I've ever eaten." she said, "It was smokey, meaty, salty, sweet, spicy... everything was just so perfect!"  Bari nodded in agreement.  "I might be ruined on bacon forever after that," he said, starring at the empty pan forlornly. 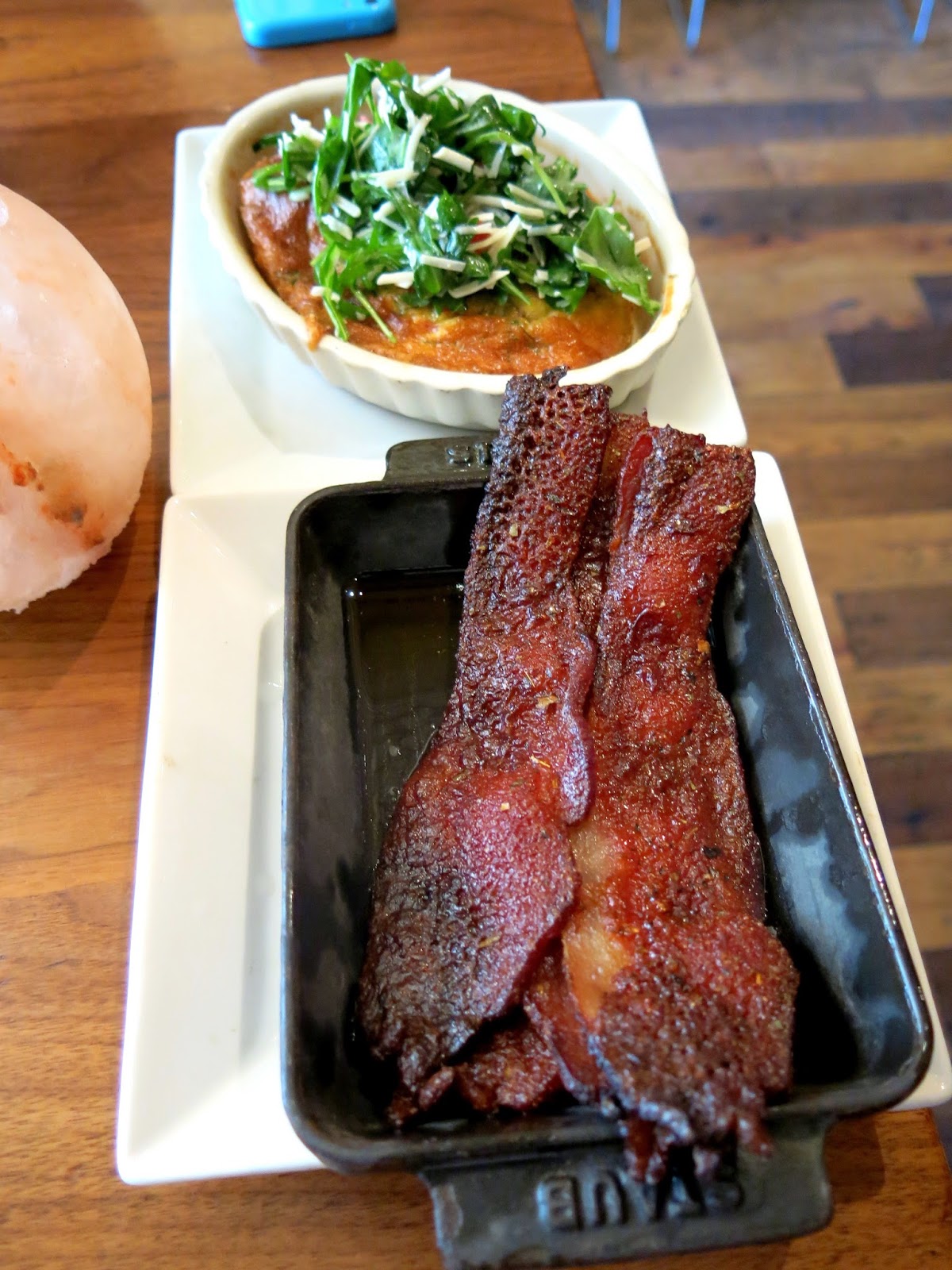 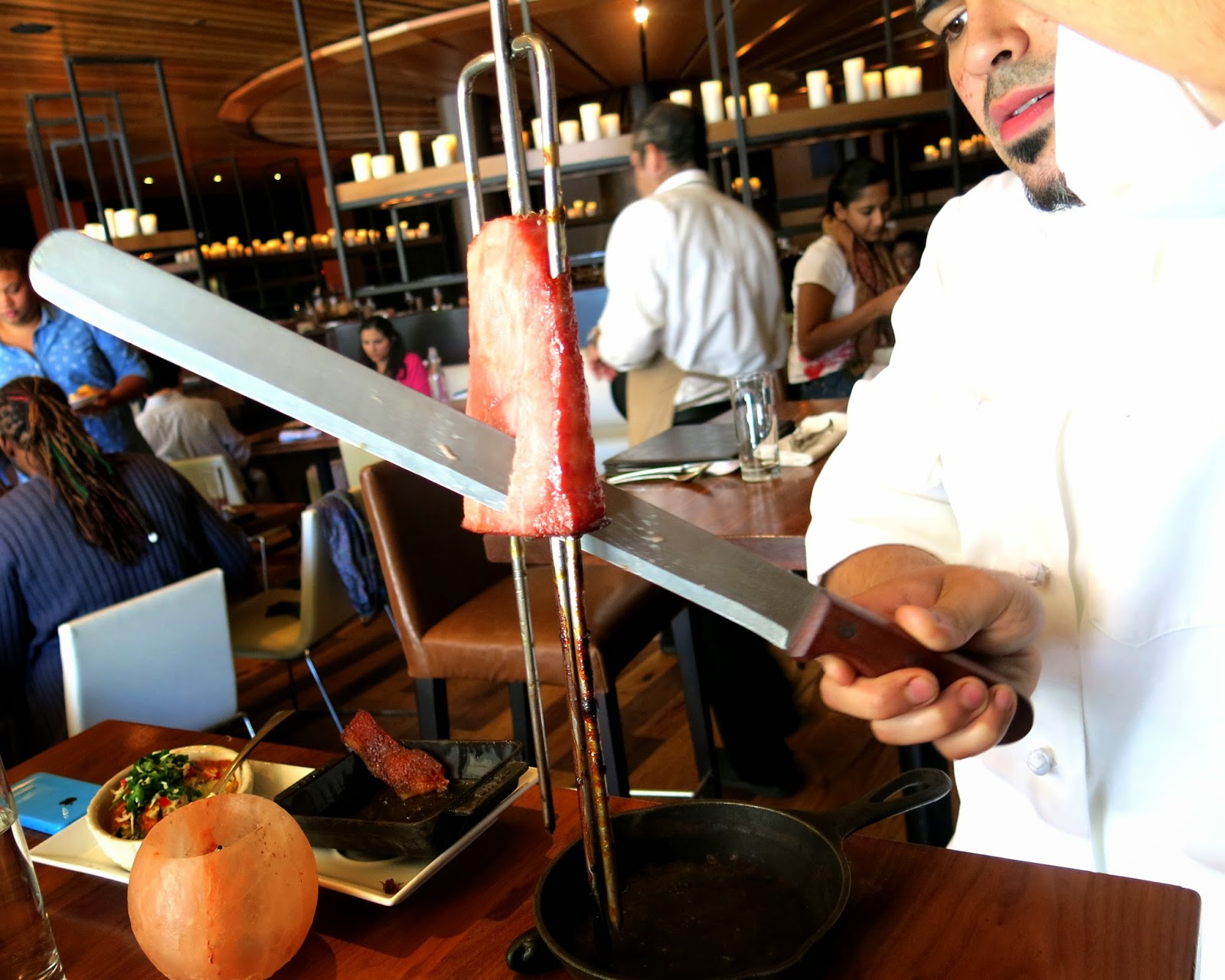 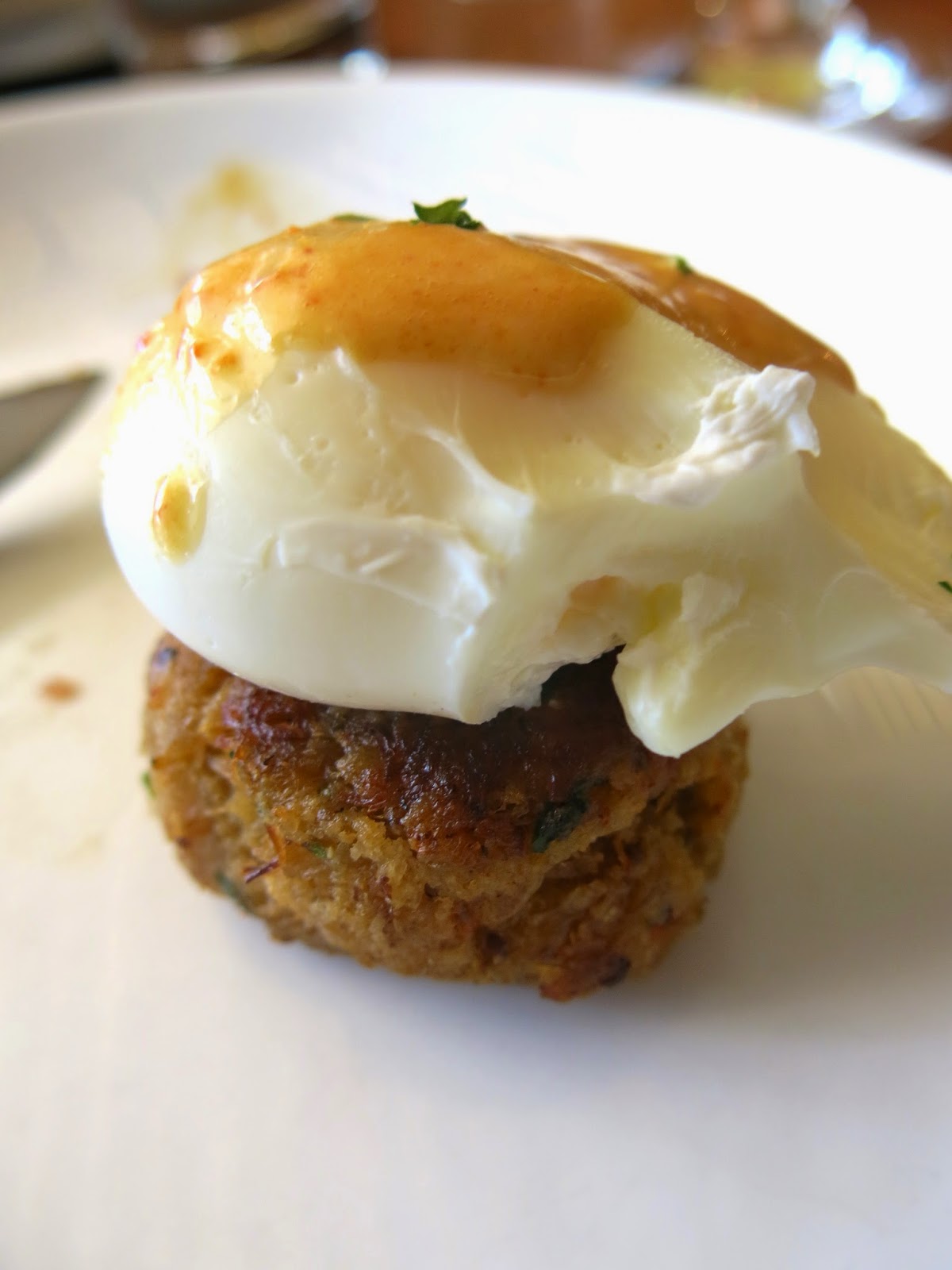 No with a taste for meat on their lips, Brandy and Bari moved onto the next phase of their brunch by taking two black stones from a small silver plate in the middle of the table and placing them in front of their plates.  This signaled to the multitude of white coated chefs circling the room to begin bringing over the proteins.  Huge chunks of meat of spits were brought to the table and carved before their very eyes: juicy Maple Bourbon Glazed Ham, succulent Buttermilk Herbed Bottom Sirloin, Roasted Turkey breast with Cranberry sauce, and Citrus Dusted Salmon all made their rounds to the table, leaving Brandy and Bari practically gasping for breath between each bite.  Two of the more original offerings were the Chicken and Waffles, a small version of the Southern favorite with a piece of barbecued chicken and a cornmeal waffle, and the Crab Cake Benedict, which made for a lovely little two bite delight. 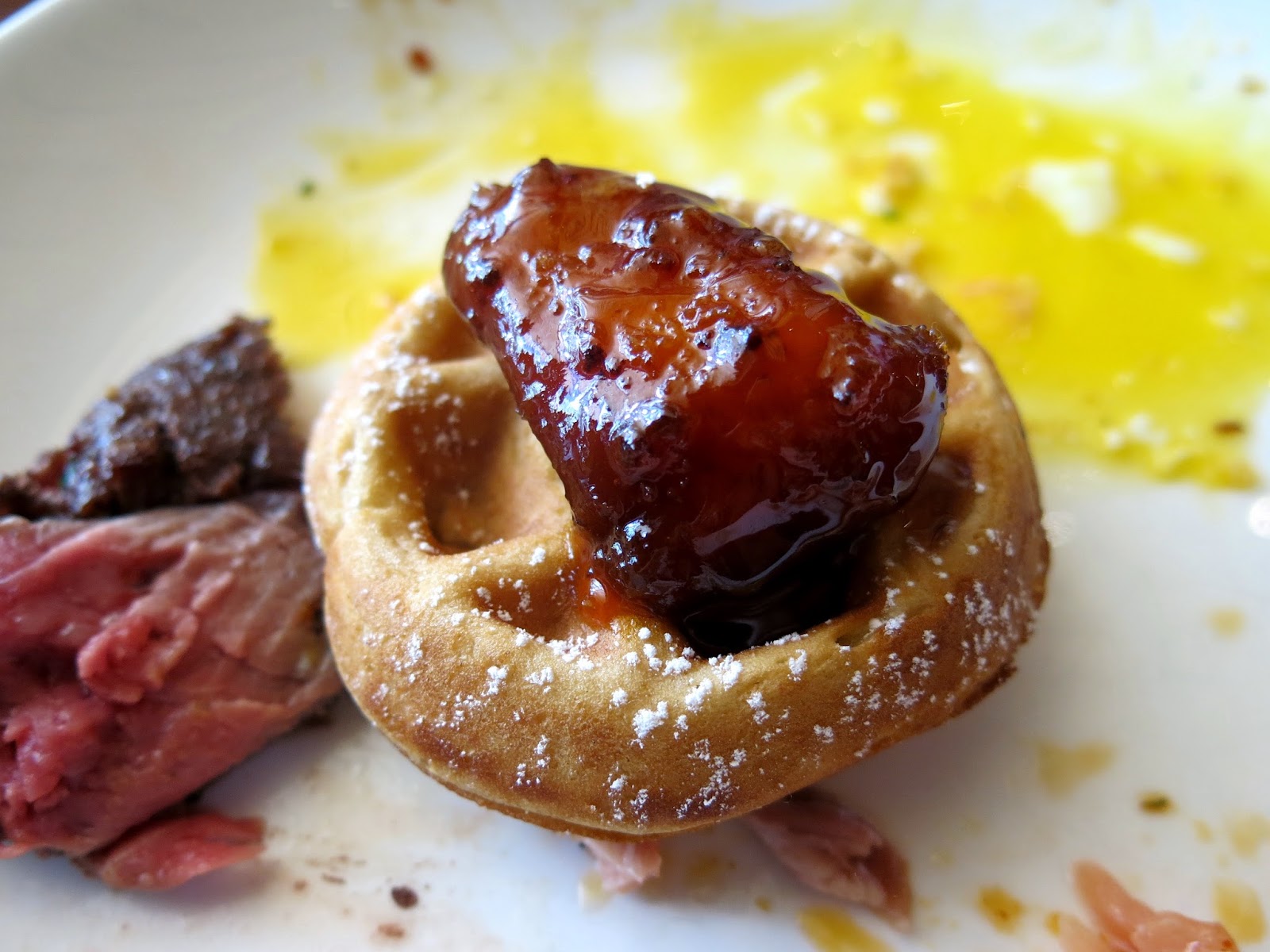 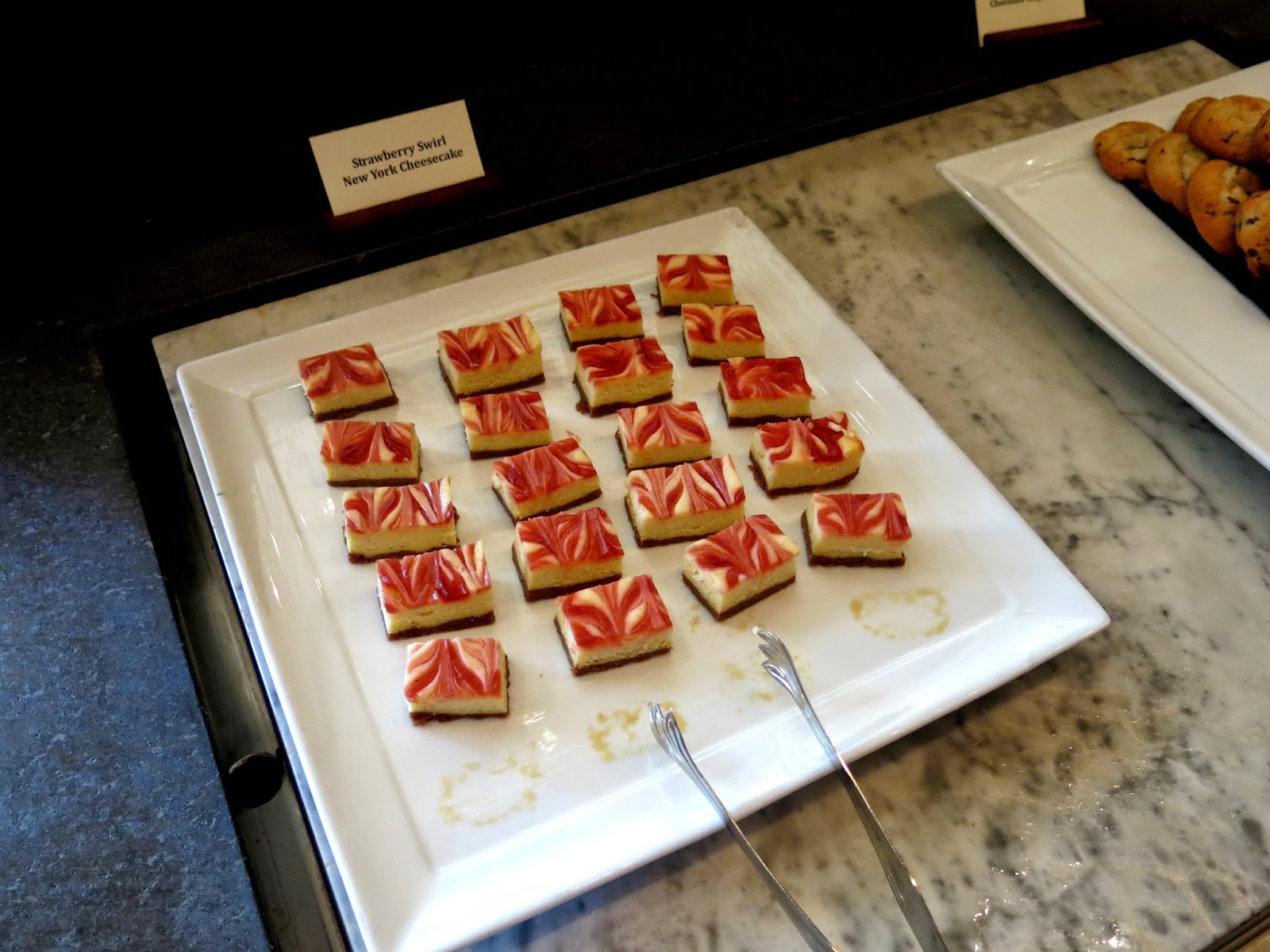 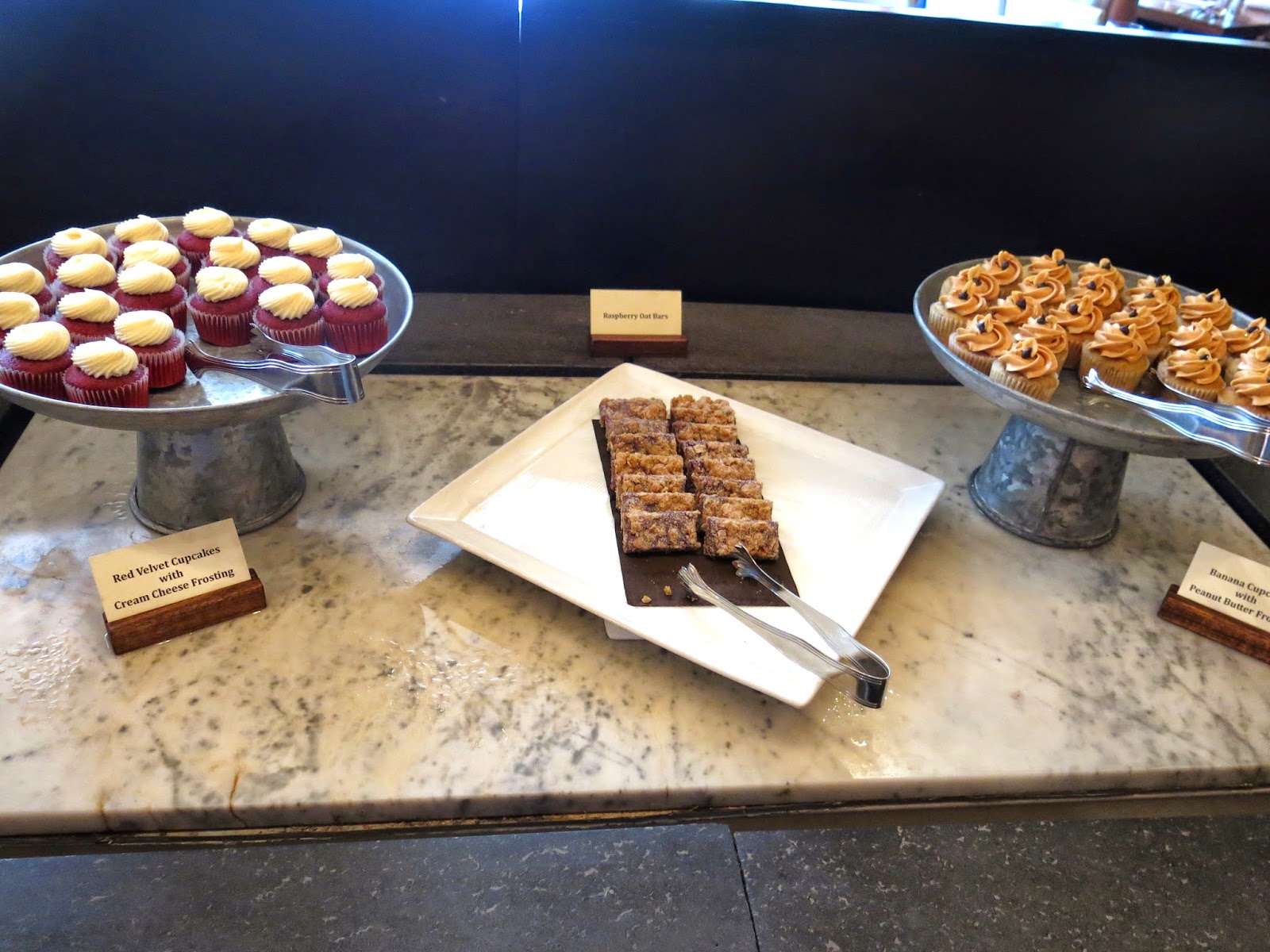 Lastly, Brandy and Bari pried themselves away from the their seats to indulge in some of the desserts on the harvest tables.  Along with a beautiful spread of fruits and fresh yogurt, some less health options presented themselves.  There was a delightfully fudgy Brownie, a rich and indulgent Strawberry Cheesecake, a surprisingly light Red Velvet Cupcake, and a bright and lovely Lemon Lime Tart.  "I don't think I can take much more of this.  I mean physically," Bari moaned.  "I'm feeling just fine.  In fact, I might ask for some more of that bacon," Brandy said, to which Bari responded, "Ok, maybe I can make room."

ZED451 was most certainly one of the most unique brunch experiences Brandy had ever had, and at a very reasonable price of $34 a person, Brandy was sure she'd be having that brunch again.  The food was all beautifully presented, and the uniqueness of the table side protein service was simply stunning.  "Uh... I don't know if I can make it to the train station!" Bari Bronzo groaned. Brandy, gracefully rising from her seat said simply, "Well you're in luck!  ZED has a complimentary shuttle service that will take you anywhere in the downtown area!"  "Yes please," Bari whispered before falling into a deep slumber at the table.  "I probably should have mentioned to him that the key to surviving a brunch like this is to pace yourself on the bourbon lemonade," said Brandy. 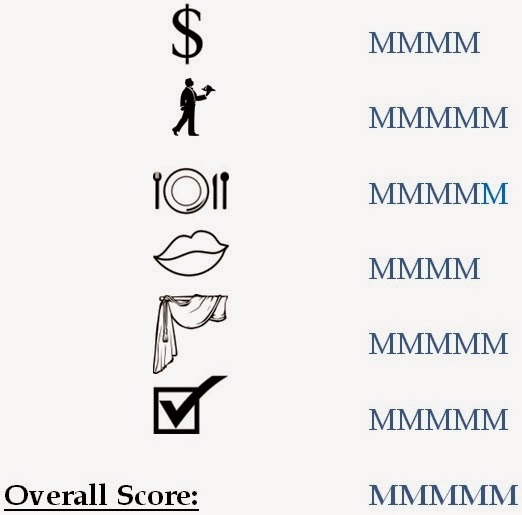