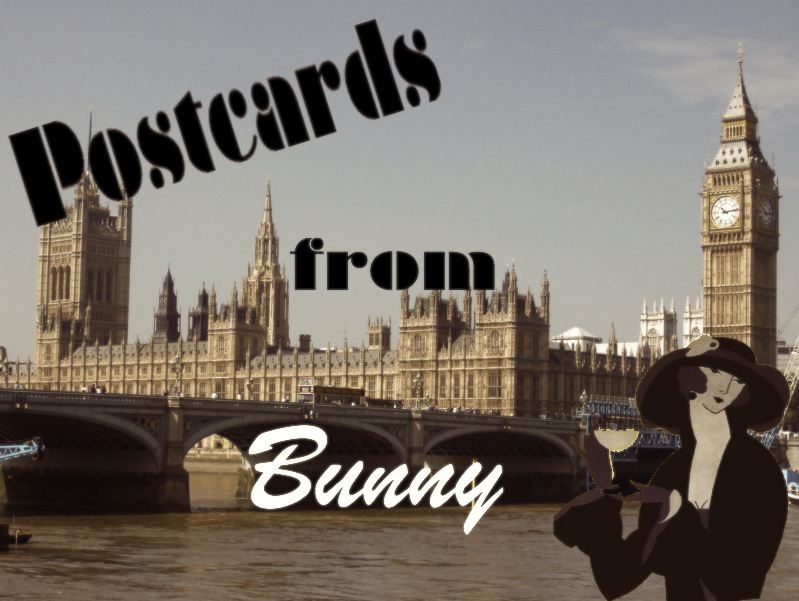 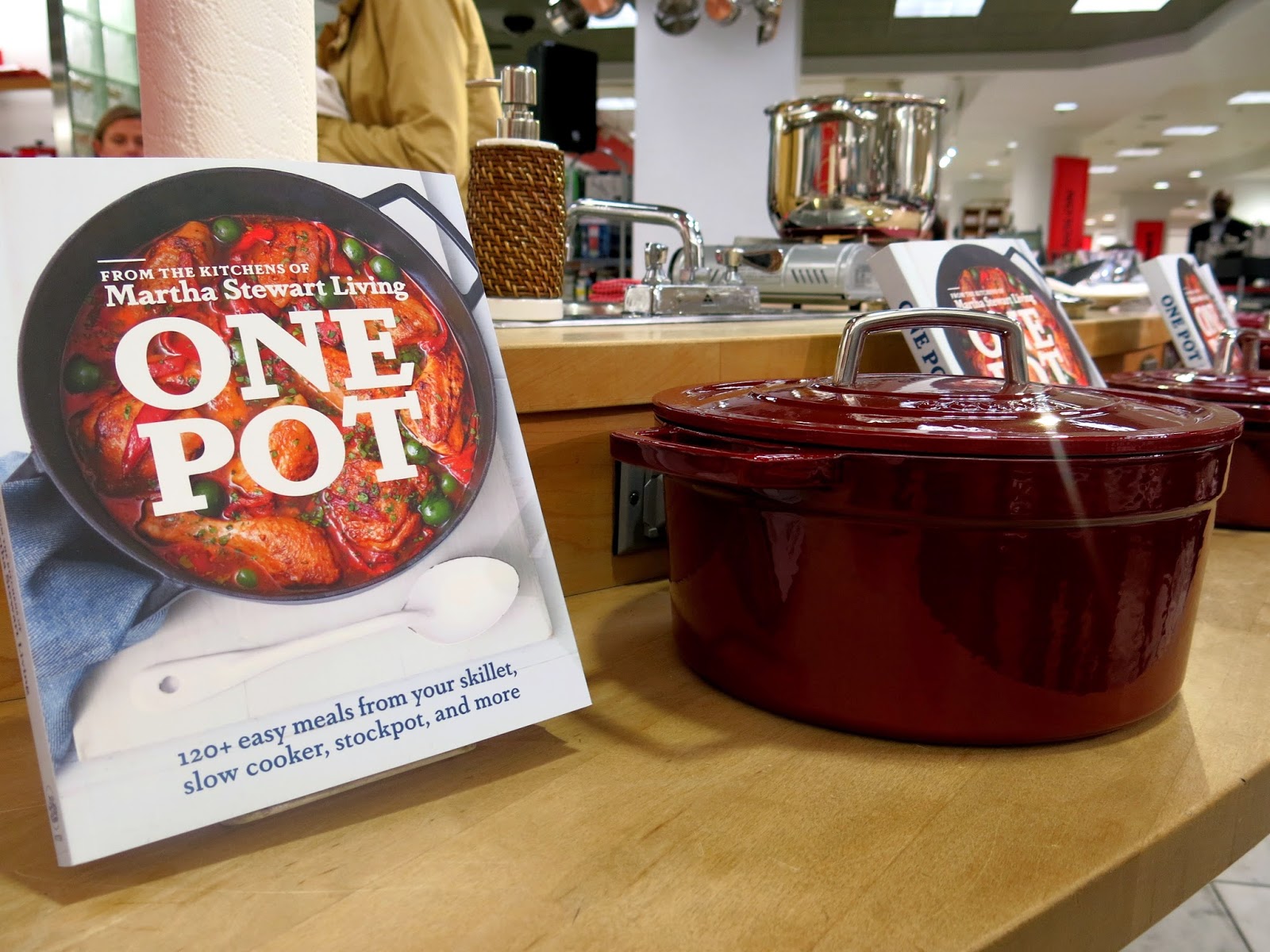 One of the downsides to Bunny's constant traveling is that there isn't always to cook for her and her husband.  "Even if there is a kitchen available, there's not always a lot of access to bowls, pans, and utensils in the middle of a dinosaur dig!" she says of her experiences trying to cook while on location at her husbands' archaeology sites.  Maybe this is why when Brandy informed her that the legendary Martha Stewart was going to be premiering her new cookbook, One Pot: 120+ Easy Meals from your Skillet, Slow Cooker, Stockpot, and More, at Macy's on State Street, Bunny hopped on the first flight back to Chicago in order to attend. 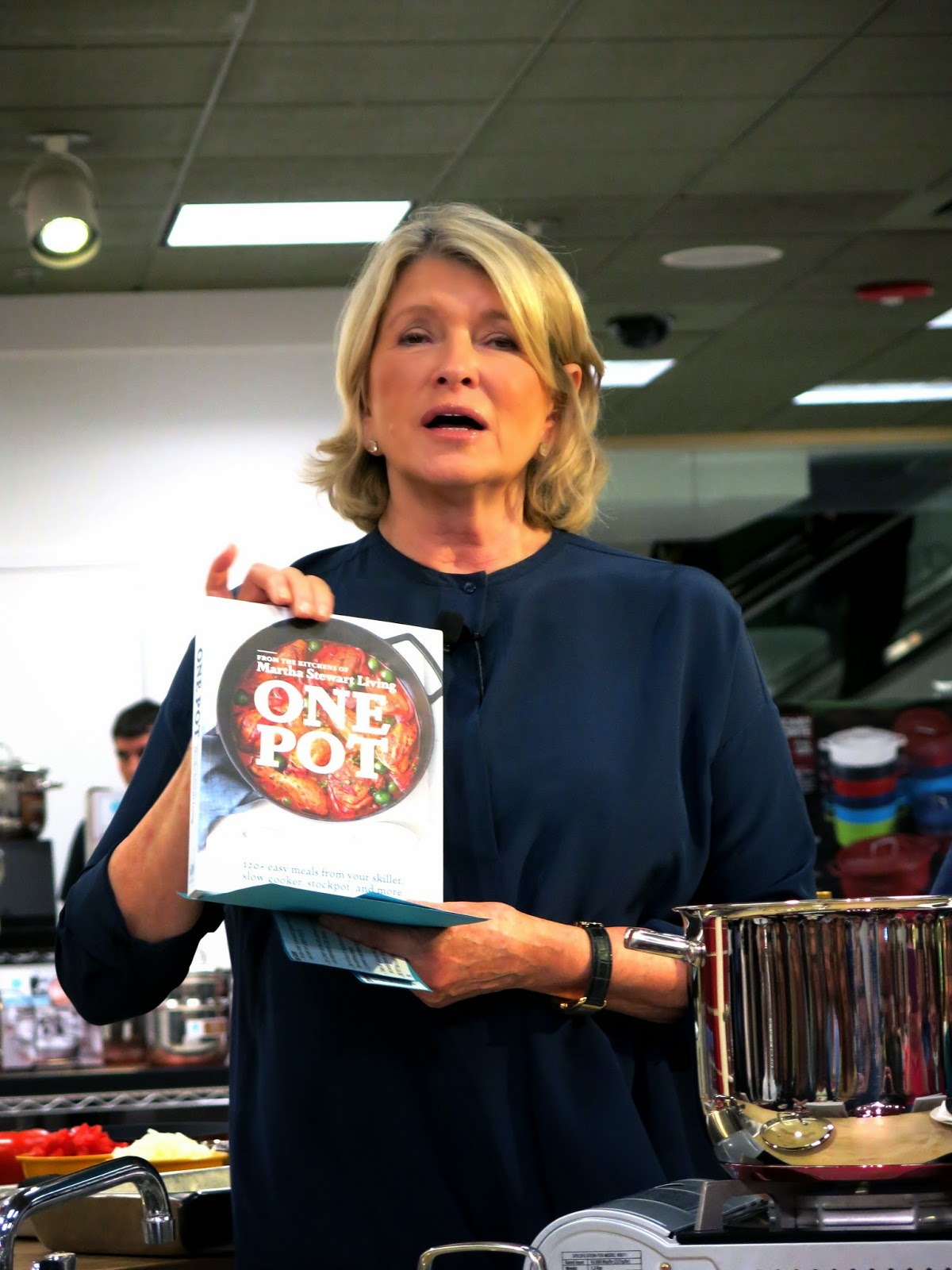 Bunny has always idolized Martha Stewart, as do many crafty hopefuls, entertaining novices, cooking hobbyists, and home decor mavens all over the world for her classic style and easy-to-follow tips.  "There may not be a single person in America who doesn't know who she is, and with good reason!" as Bunny told her neighbor at the demo, "There may be those who pretend to not know her, but those people are only doing so because they want everyone else to believe that the hors d'oeuvres at their last party were their recipes and not hers...Ok, I may have done that once or twice."

Luckily for Bunny, Macy's ran a promotion in which shoppers who bought $75 worth of Martha Stewart kitchen wares were given a free copy of the cookbook before it's official release (which is on Tuesday, September 23rd), so Bunny spent a good deal of time debating whether she wanted to get one of the beautifully colored enamel Dutch Ovens, the extra deep skillet, the non stick frying pans, or the gorgeous roasting pan.  "I'm leaning towards the Dutch oven, I think.  They may be a tad on the heavy side, but one should never travel without a Dutch Oven.  You never know when they'll come in handy for a spontaneous casserole!" Bunny explained. 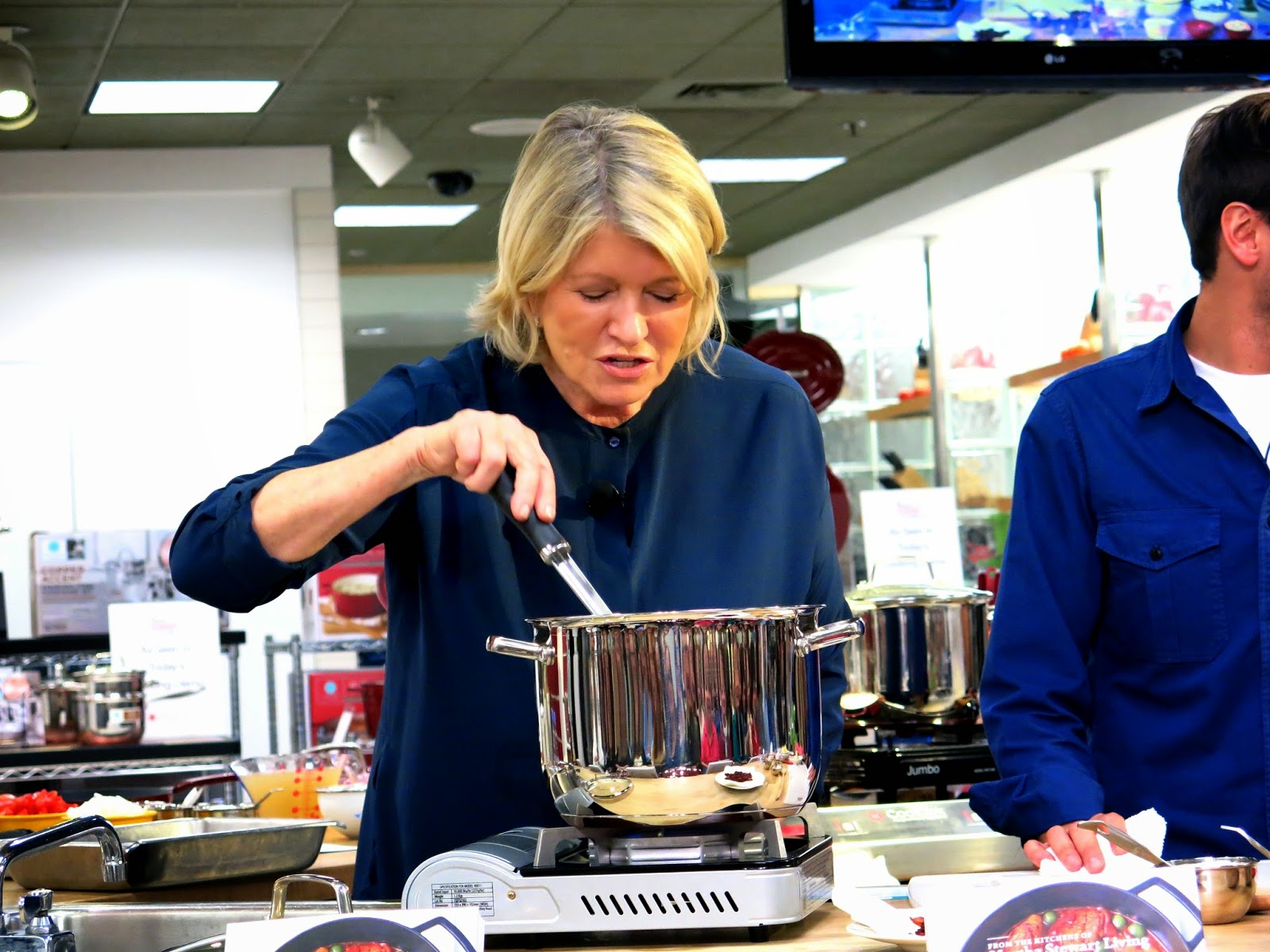 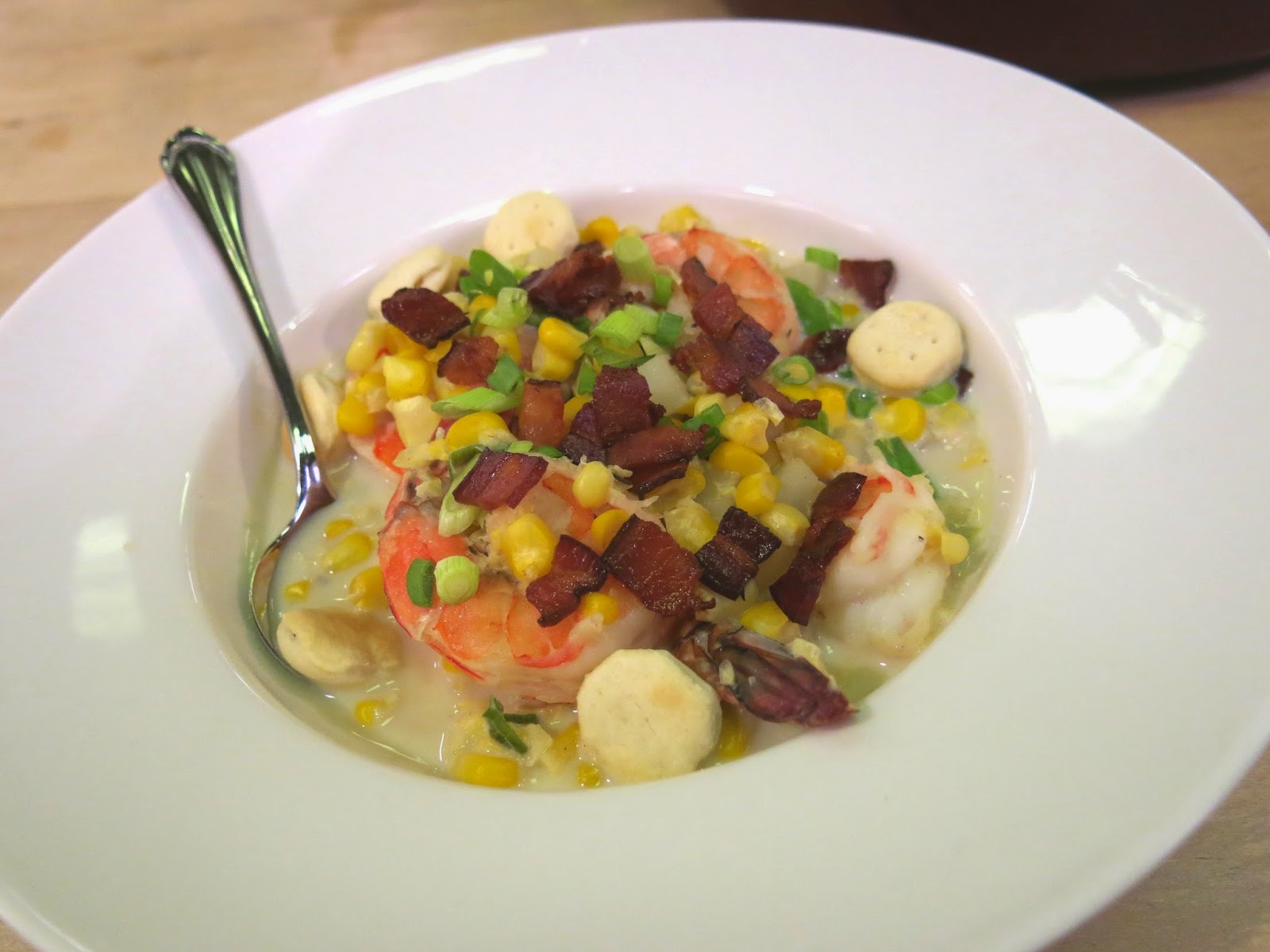 As Martha herself entered the demo kitchen, a waft of sauteing bacon accompanied her, as if signaling to the crowd that she was there to take care of them.  She began by whipping up a wonderfully hearty Corn Chowder with Bacon and Shrimp in one of her stock pots.  As she prepared the soup, she told the crowd about some of the different products in her cooking ware line that could be used in conjunction with the book, also letting them know that she was in the process of developing a slow cooker and a pressure cooker to add to the collection. 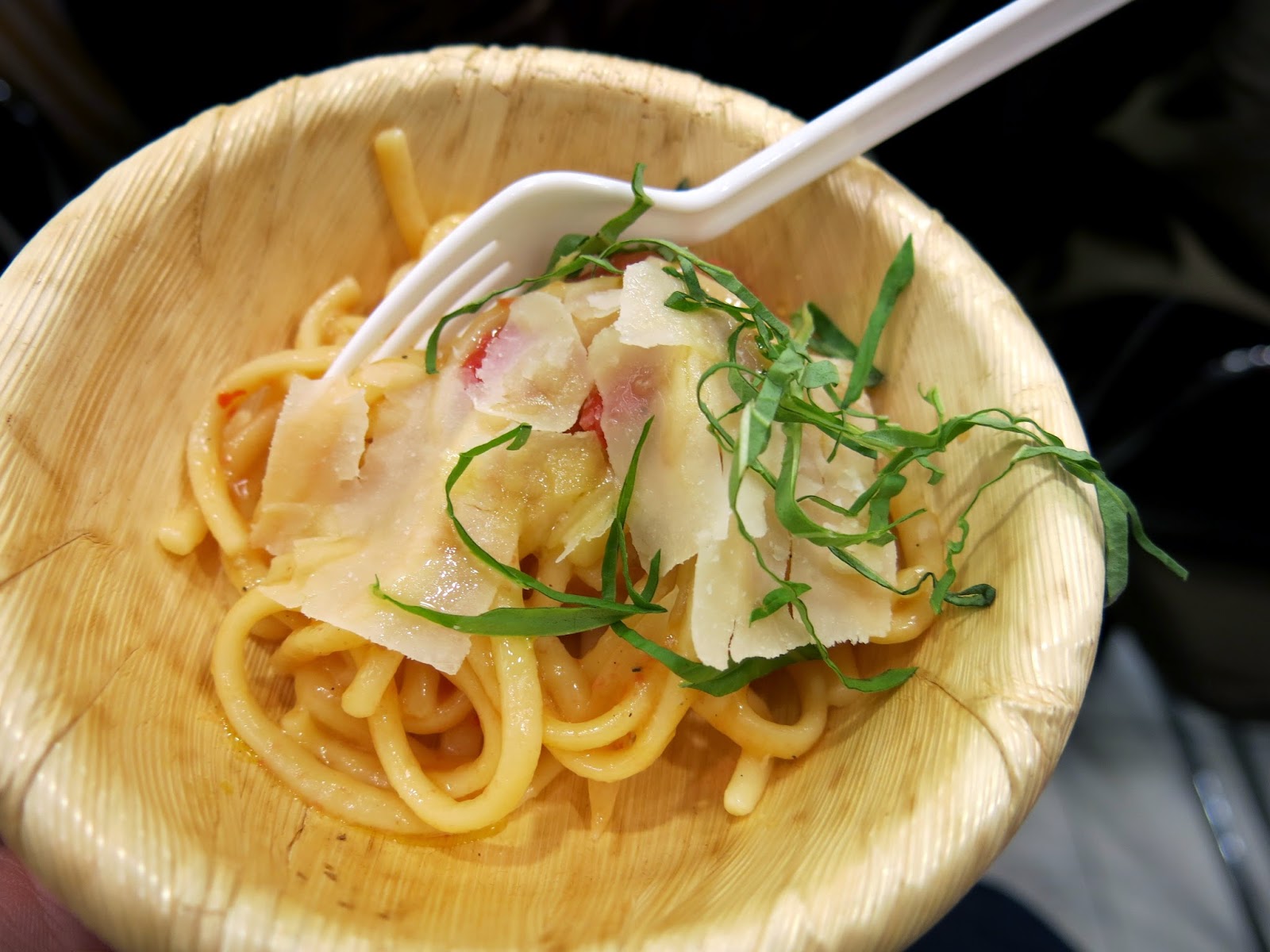 The second dish was a simple Linguine with Tomato and Basil, where amazingly enough, the veggies were prepared right along side the pasta in one skillet.  "I grow basil in my garden, you know," Martha told the crowd, "I had to get up early this morning because there were two tour groups coming into my garden and I wanted to pick up a little before they got there.  I didn't want them to think I'm a messy gardener!" She also told the crowd how she drank her own mix of green juice every morning (complete with a good chunk of ginger) before working with her trainer and then heading into her test kitchens, where she works with hundreds of professionals to test and re-test recipes for her magazine and various media outlets.  "That's why we always say to follow a recipe precisely the first time you cook something," she said, "We've done all the work for you already, so if you follow it exactly, you can't go wrong." 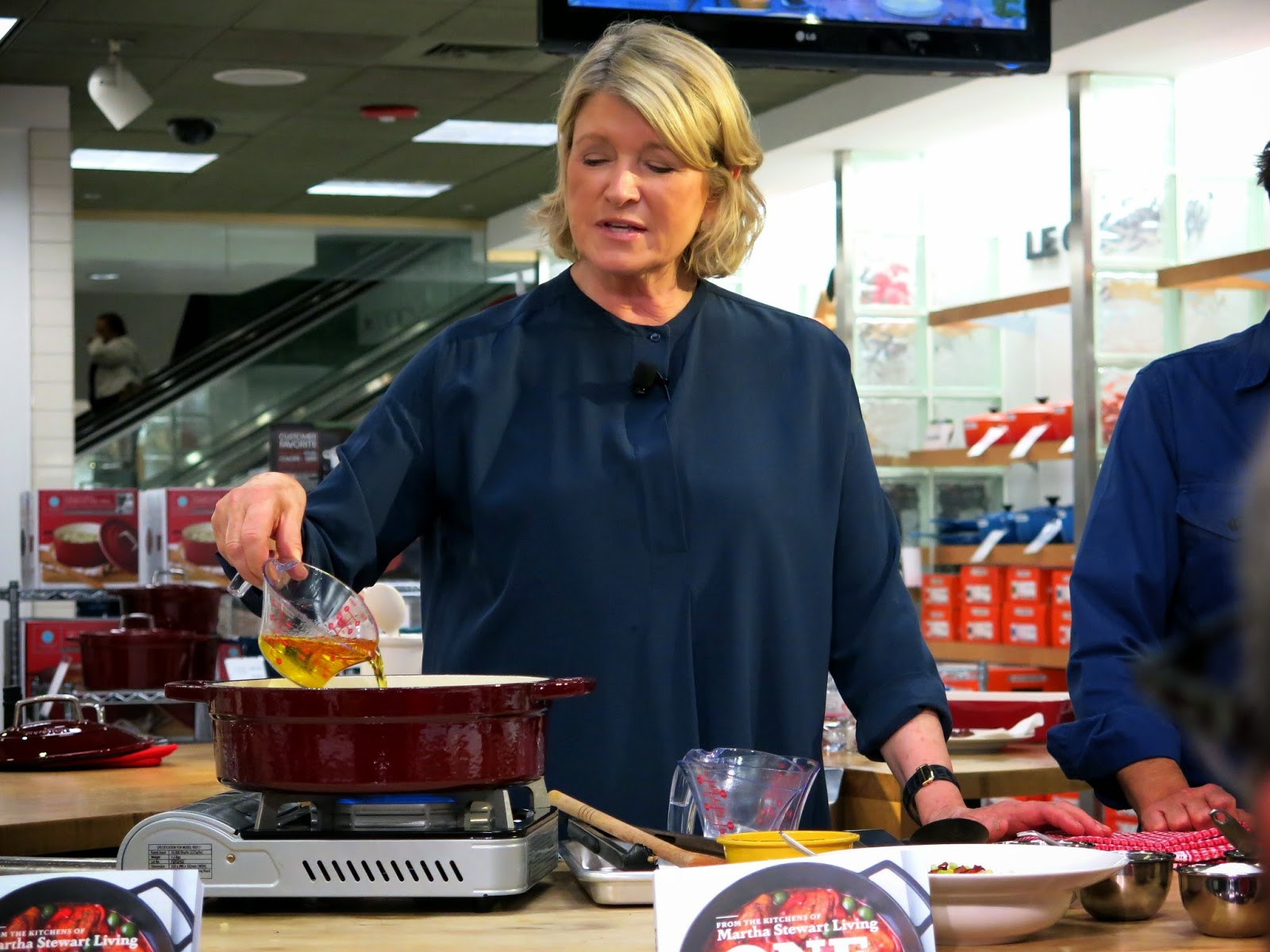 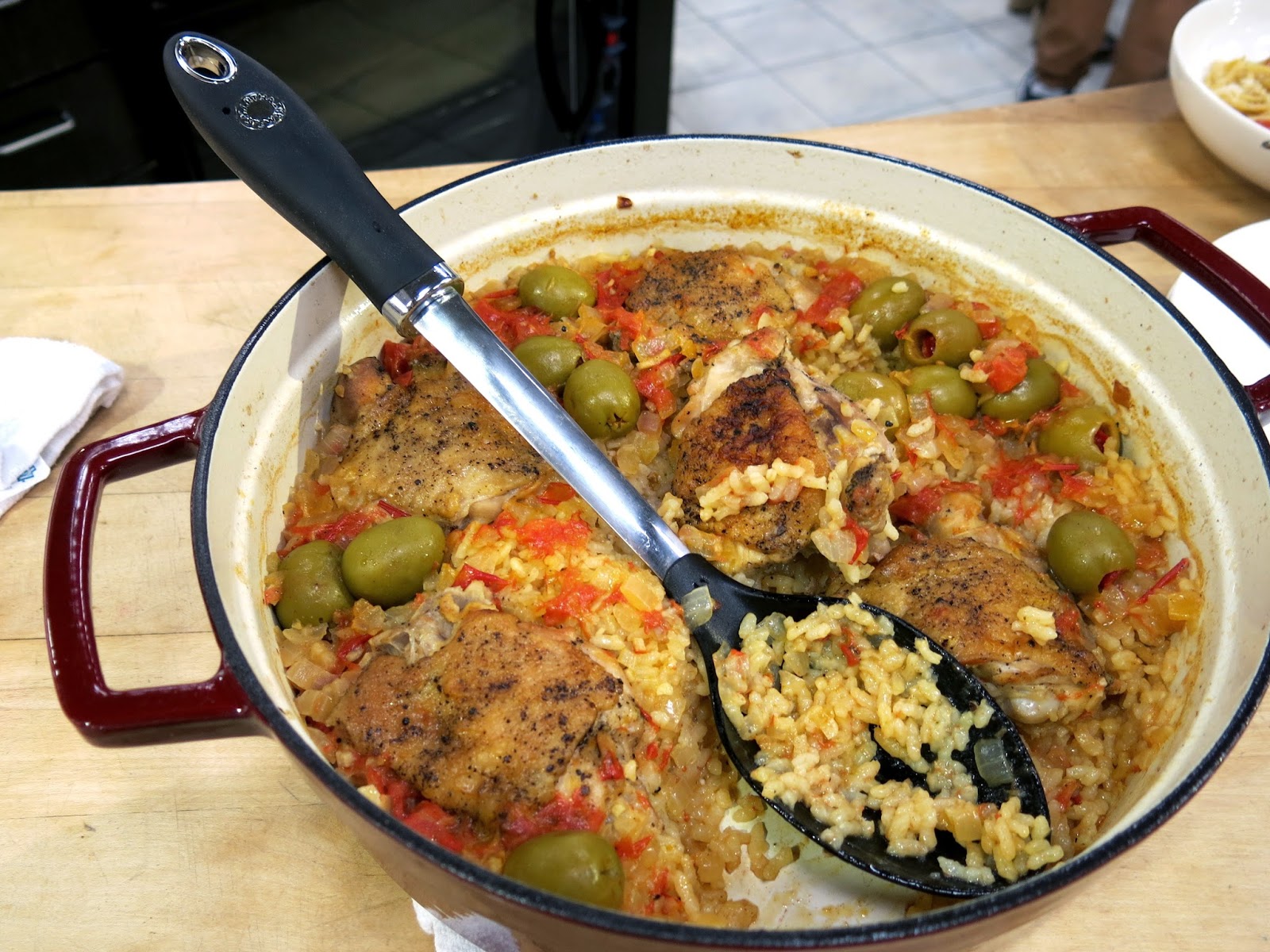 The last dish was an Arroz con Pollo (or Chicken with Yellow Rice), which she demonstrated in one of the Dutch ovens, garnishing it with some briny green olives.  Bunny's favorite part of the demo was the fact that Martha then actually began to eat the dishes she'd prepared, a thing Bunny nor Brandy has ever witnessed at any cooking demo before!  "I'm always surprised the chefs don't eat their dishes when they're through!" said Bunny, "If I cooked up something that delicious looking, I'd want to dig into it right away!" 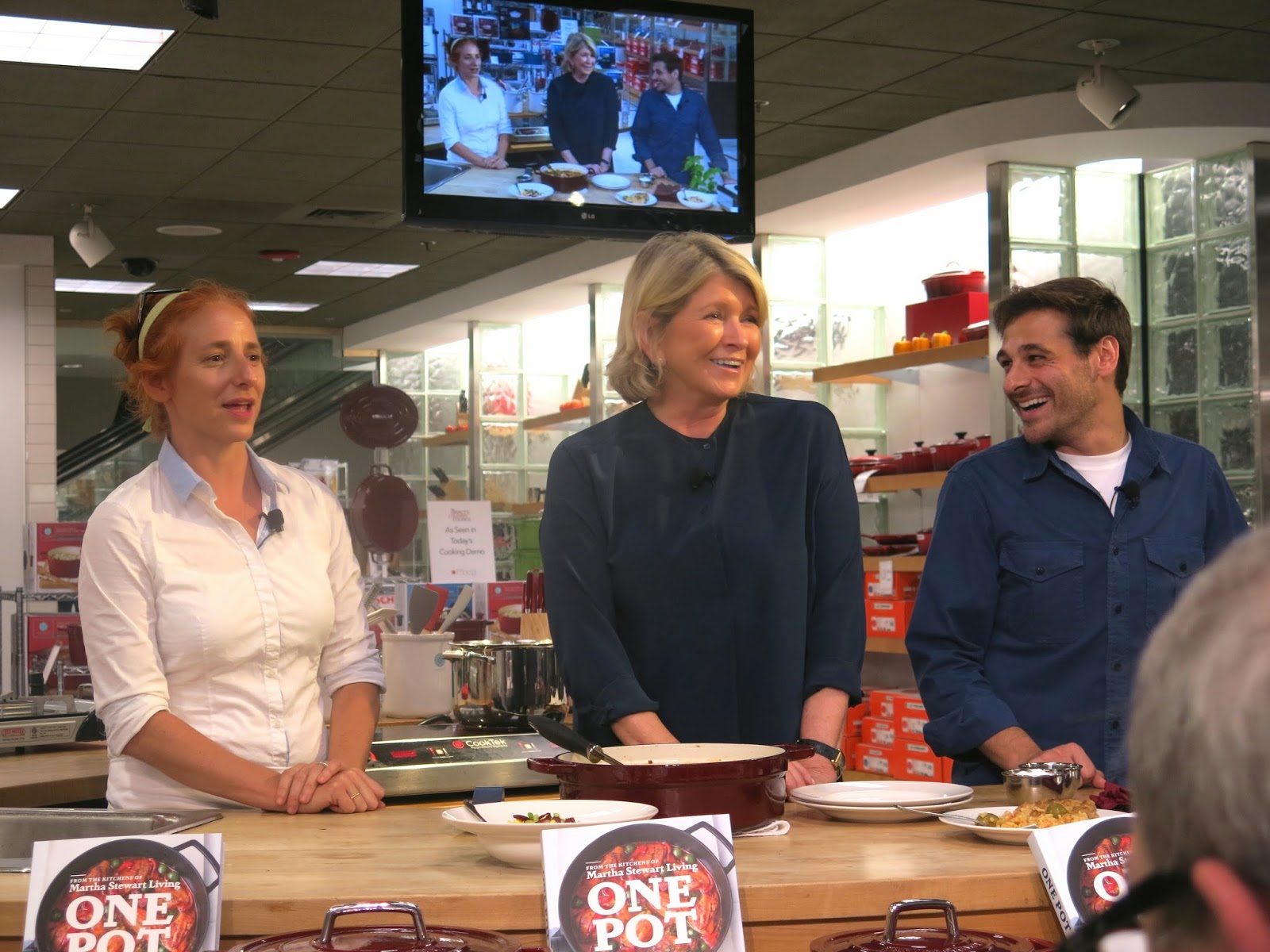 Martha then took a few questions from the crowd, giving them advice on apple pie making ("Use several different kinds of apples."), demonstrating how to cut a bunch of cherry tomatoes in half all at once, and letting everyone know that her favorite cocktail is a Polish or Russian Vodka Martini.  After the demo, she graciously stayed to sign cookbooks for the audience, though sadly, Bunny had to run out and catch her flight to meet Benedict at his next dig in Kuala Lumpur.  "The Dutch oven might be too heavy to take as a carry on!"  Bunny fretted, "Maybe I'll pack my clothing into it and tell them it's just an extra heavy duty carrier bag."

The writers of this blog have been compensated by Everywhere Agency for the information contained in this post, but the opinions stated were not influenced.
Posted by Bunny and Brandy at 11:08 AM