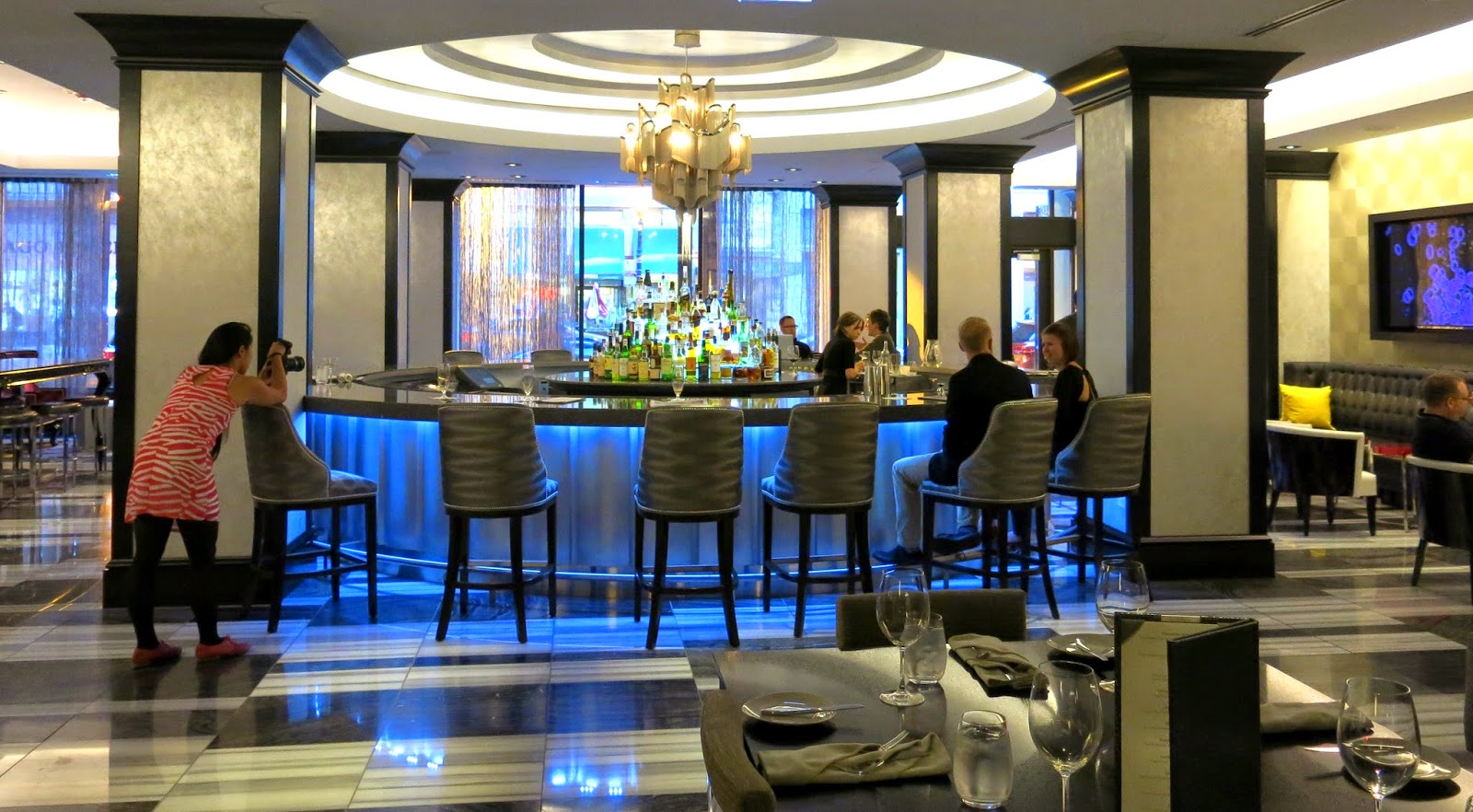 The other night while Bunny was off gallivanting with Martha Stewart at Macy's, Brandy was actually just around the corner at the Silversmith Hotel, checking out the brand new fall menu at their signature bar and restaurant, Adamus, along with a group of Chicago Food Bloggers members.  "I am very ready for the flavors of fall," Brandy told the door man who kindly let her into the building, "Pumpkin lattes are fine for some, but I crave it all.  The spices, the fruits, the earthiness... I want it all the moment the weather turns crisp." 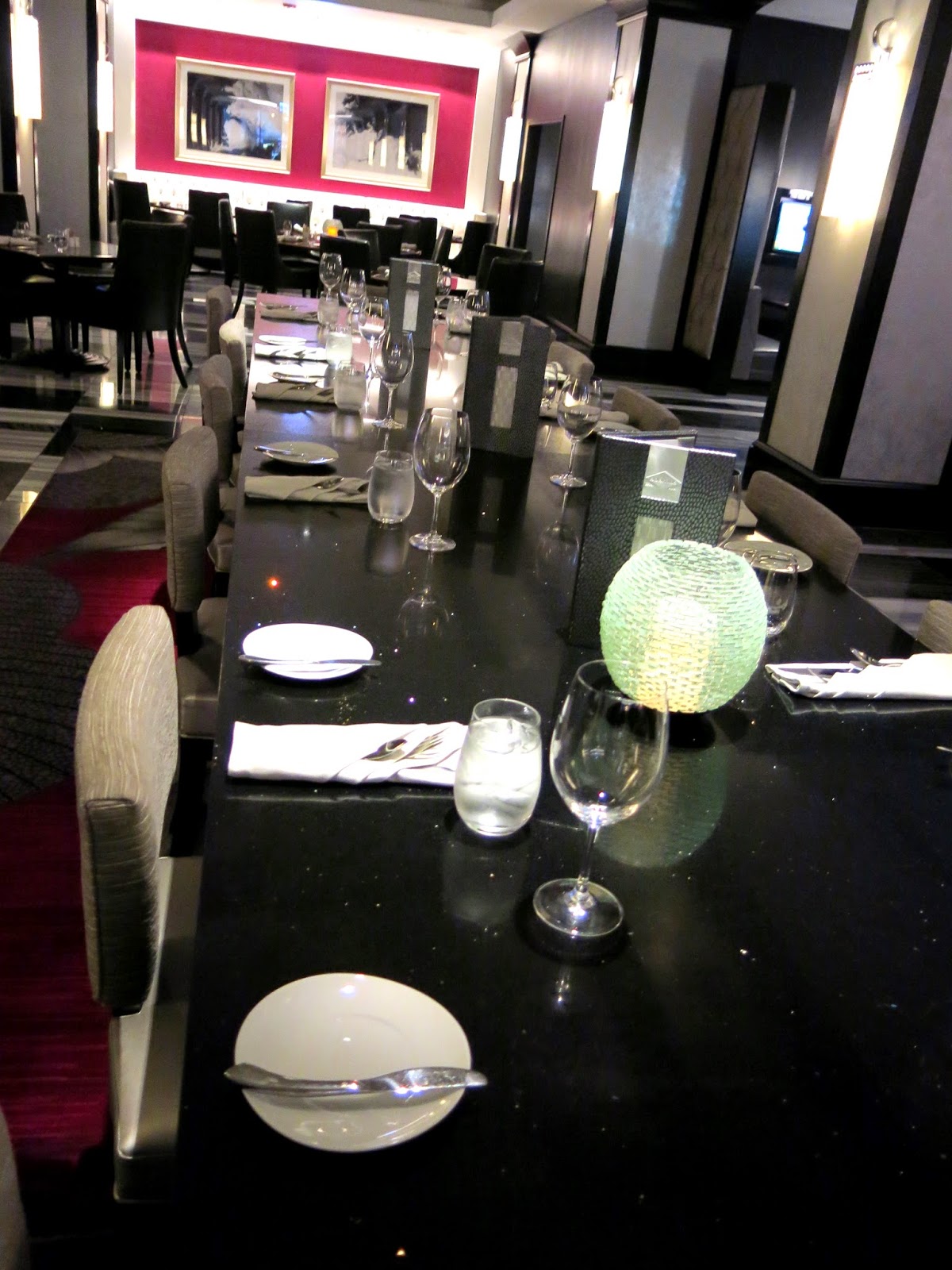 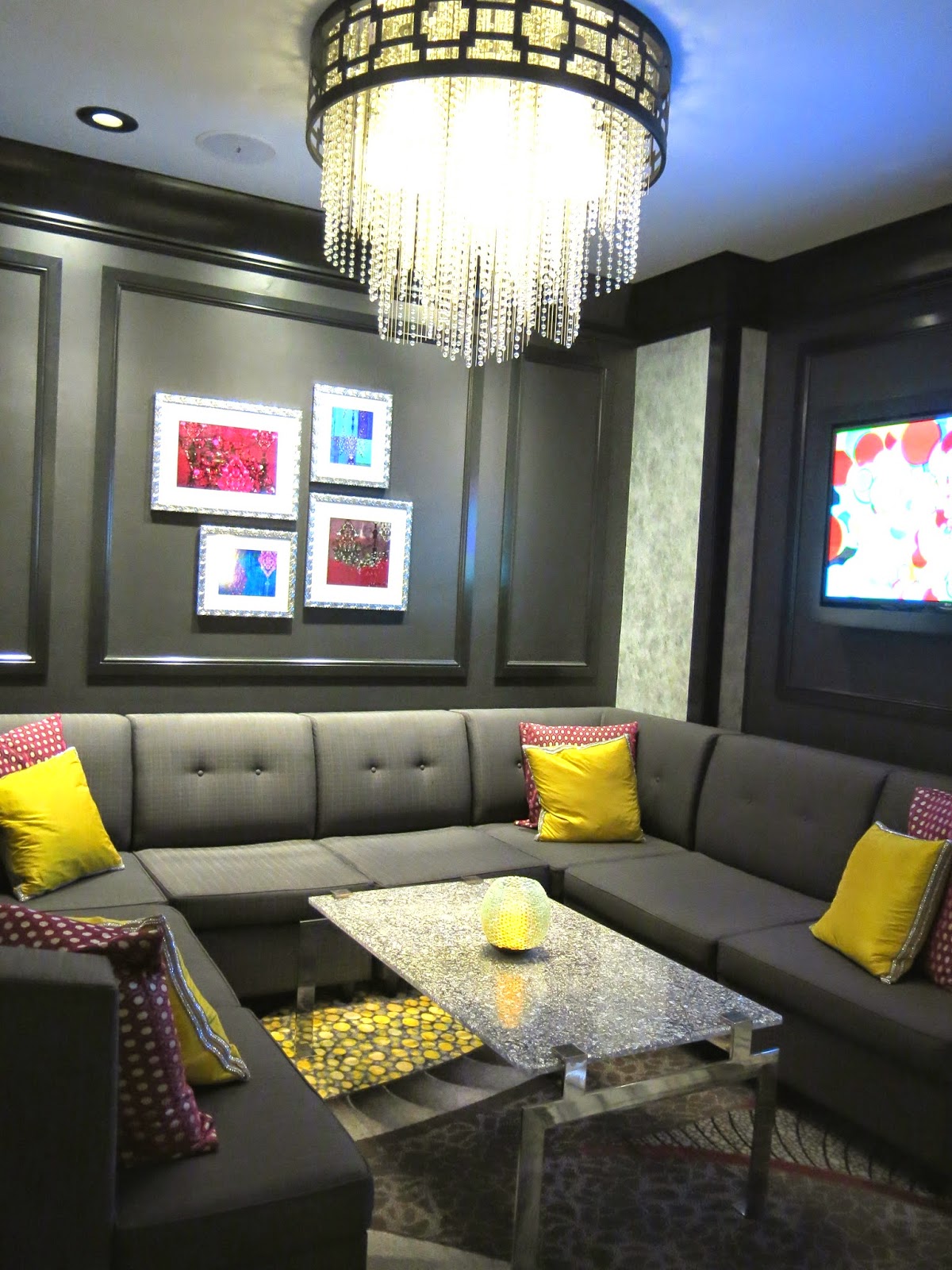 Stepping into Adamus, one was greeted by gorgeous marble floors, sparkling lighting fixtures, and a circular centerpiece of a bar that resembled an upside down chandelier.  The color scheme was mainly grays and silvers with pops of green and purple, especially in the more secluded lounge areas, which consisted of large, comfortable looking sofas piled high with throw pillows.  A large banquet style table had been set down the center of the main dining area for the bloggers and it glittered under the dim light.  "Oh my, everything is so chic," Brandy mumbled under her breath, "I should have worn my good hat pins." 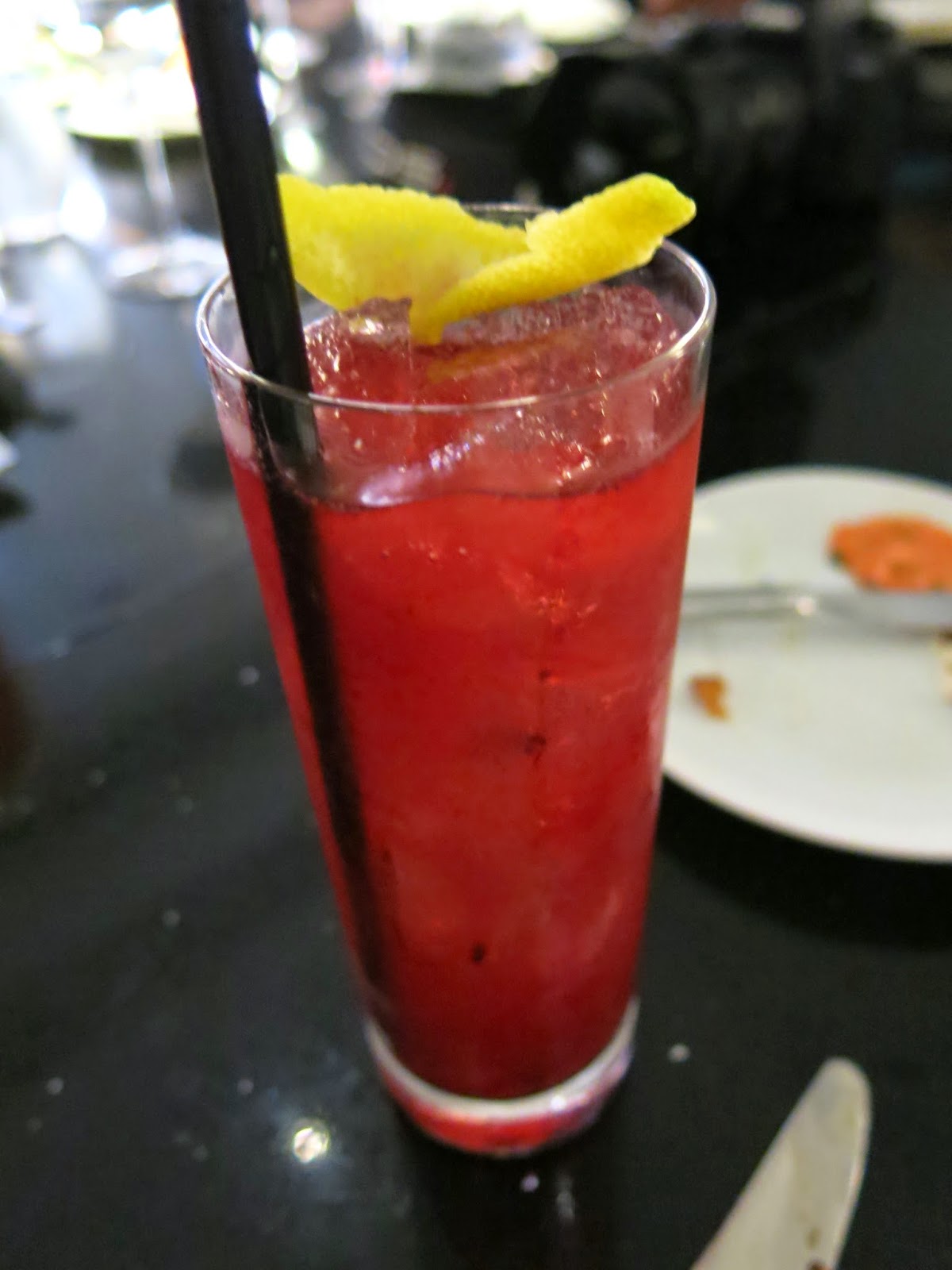 A few glasses of wine were poured out and a lovely bread service was brought to the table.  Executive Chef Nelson Erazo came out of the kitchen to introduce himself to the group and tease everyone with what was in store for them, saying that they would be sampling items from the bar menu, the dinner menu, and the dessert menu, also encouraging everyone to browse the craft cocktail menu.  "You don't have to tell me twice!" said Brandy, who immediately ordered up a Blackberry Collins.  She loved the brightness the blackberry brought to the drink, but also appreciated that it wasn't as sweet as she expected it to be. 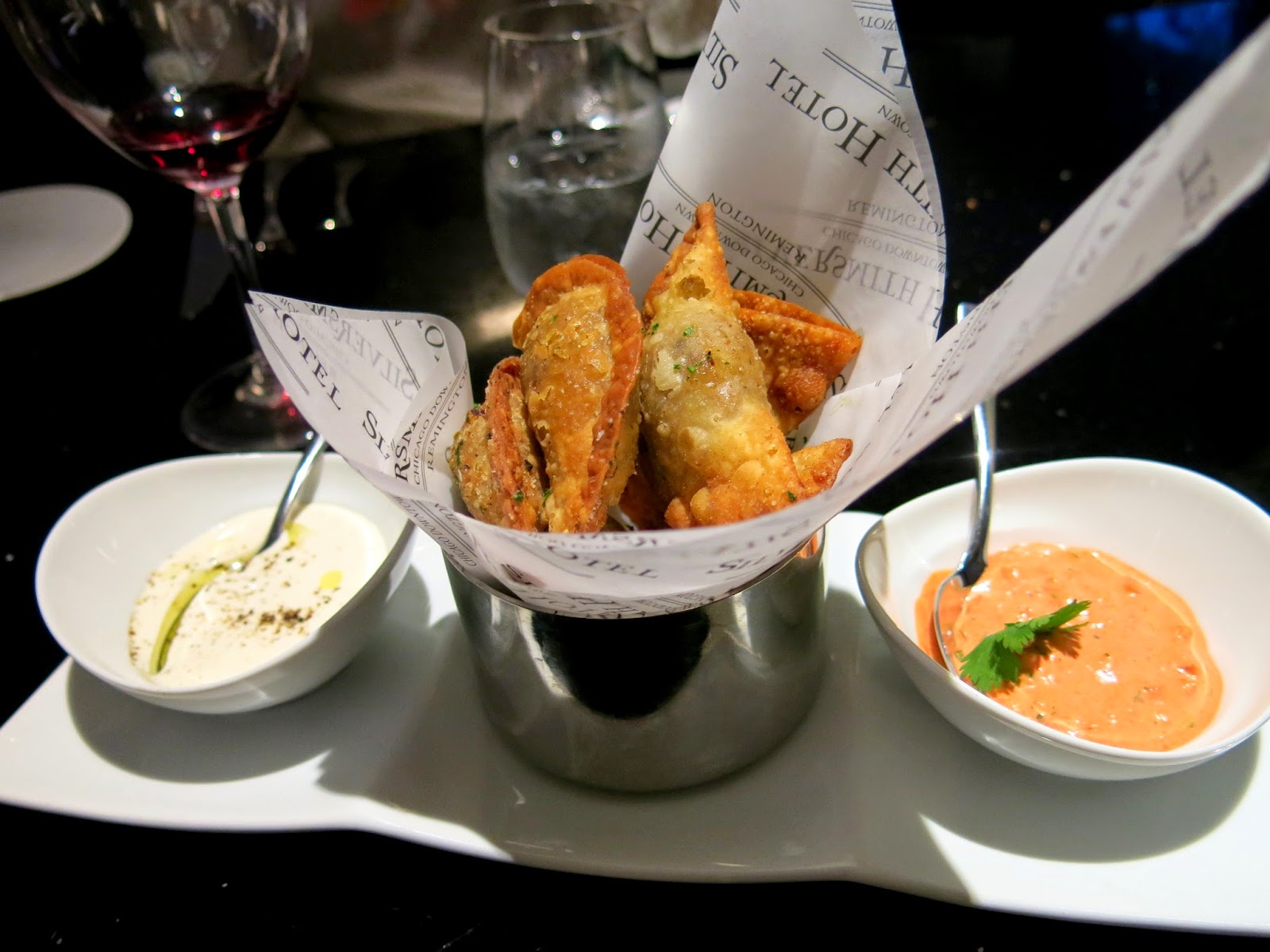 The first course was the Creekstone Beef Empanadas, served with a horseradish cream and a roasted pepper remoulade.  Brandy thought the empanadas had a perfect amount of crunch without the casing being too thick, while the tender beef filling was very well spiced. 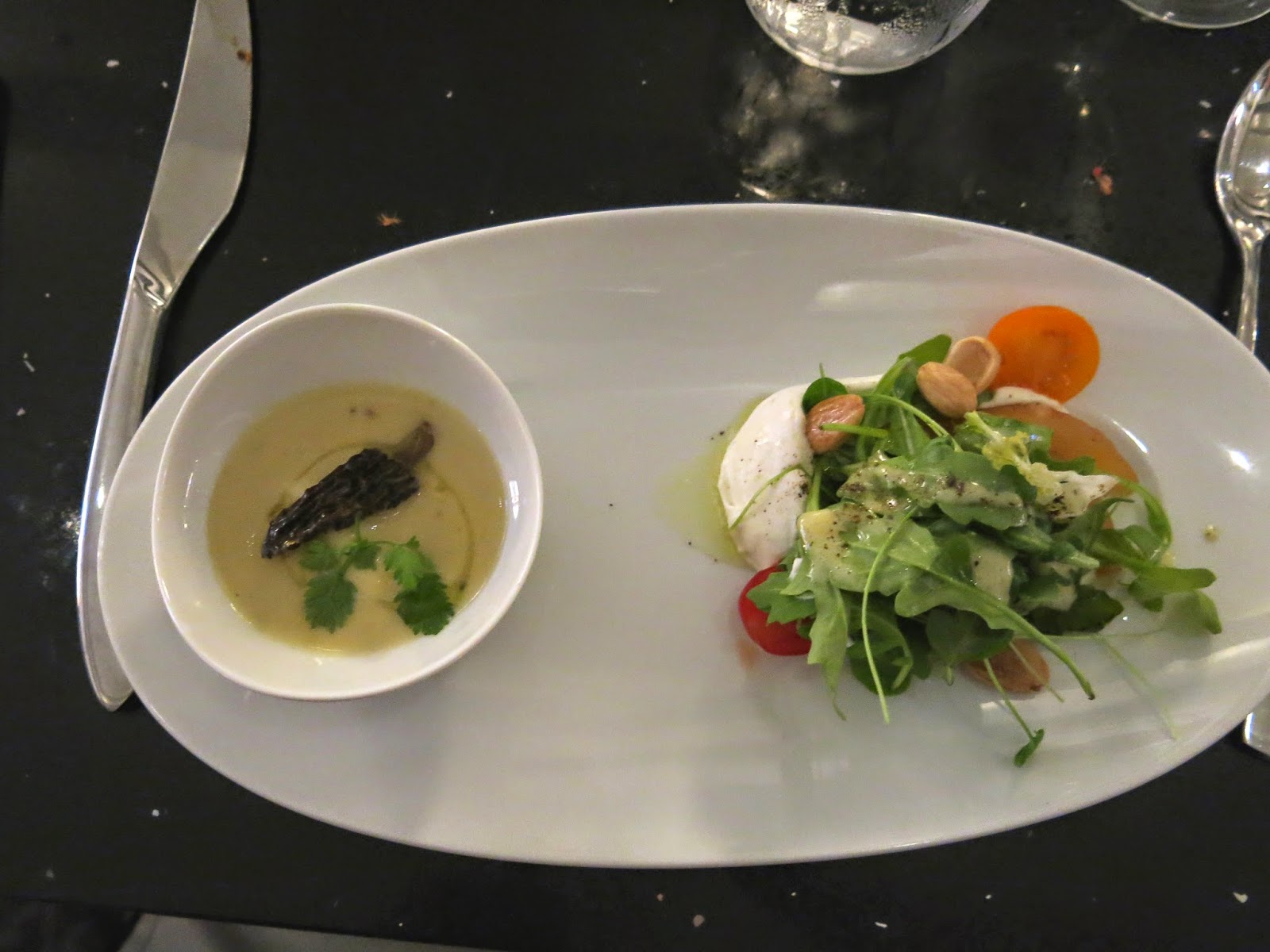 Secondly was a soup and salad course: a White Asparagus Bisque and a Pear and Goat Cheese Salad.  Brandy absolutely adored both dishes from the get go.  The bisque had a light flavor, but a rich creamy texture, and the addition of morel mushrooms and a piece of jumbo lump crab provided it with a beautifully fresh and earthy flavor.  The salad looked surprisingly summery, but one bite brought instant thoughts of multi-colored leaves, warm drinks, and brisk evenings in the pumpkin patch.  The pear had been poached with mulling spices, giving it simultaneously the feeling of a savory chai and a sweet apple tart.  The delicate greens were lightly dressed in a zingy sherry vinaigrette and some crunchy almonds provided a nice bit of texture, though the star of the salad for Brandy was the chevre mousse, an impossibly soft and airy pocket of goodness underneath the greens, which also had the mulling spices whipped into it.  "It's like eating a cloud full of wassail," Brandy sighed, wishing for more of the divine salad before she'd even finished what was in front of her. 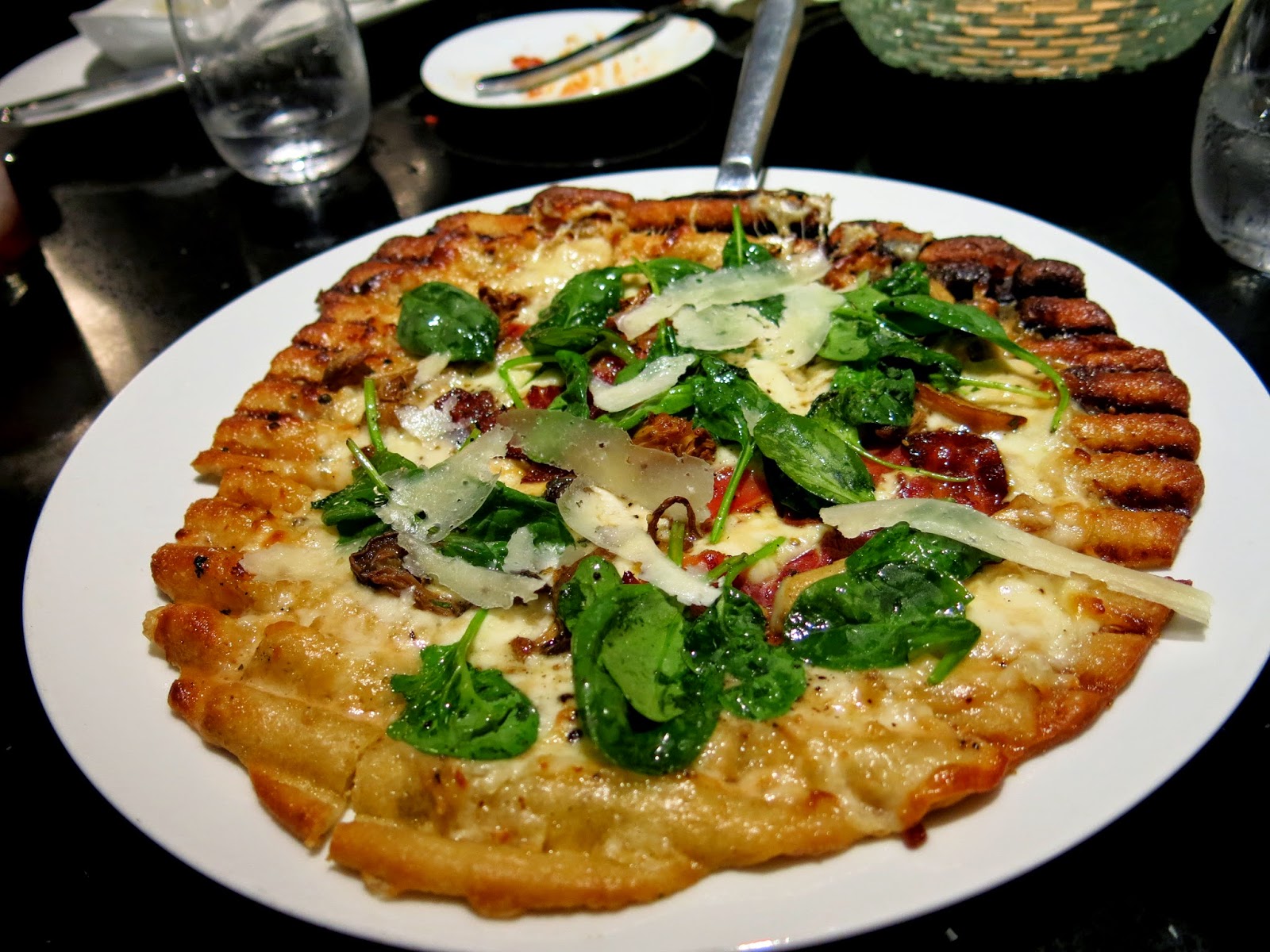 Next came a Foraged Mushroom Flatbread, which was topped with more morel mushrooms, truffle cream, wilted spinach, and shaved Parmesan cheese.  The crust was very unique; buttery and crispy, yet thin and not overwhelming, this, for once, was a flat bread in the truest sense of the word.  Though the mushrooms, cheese, and spinach all played their parts well, what Brandy liked most was the aggressive use of garlic.  "There's no such thing as too much garlic," as she put it. 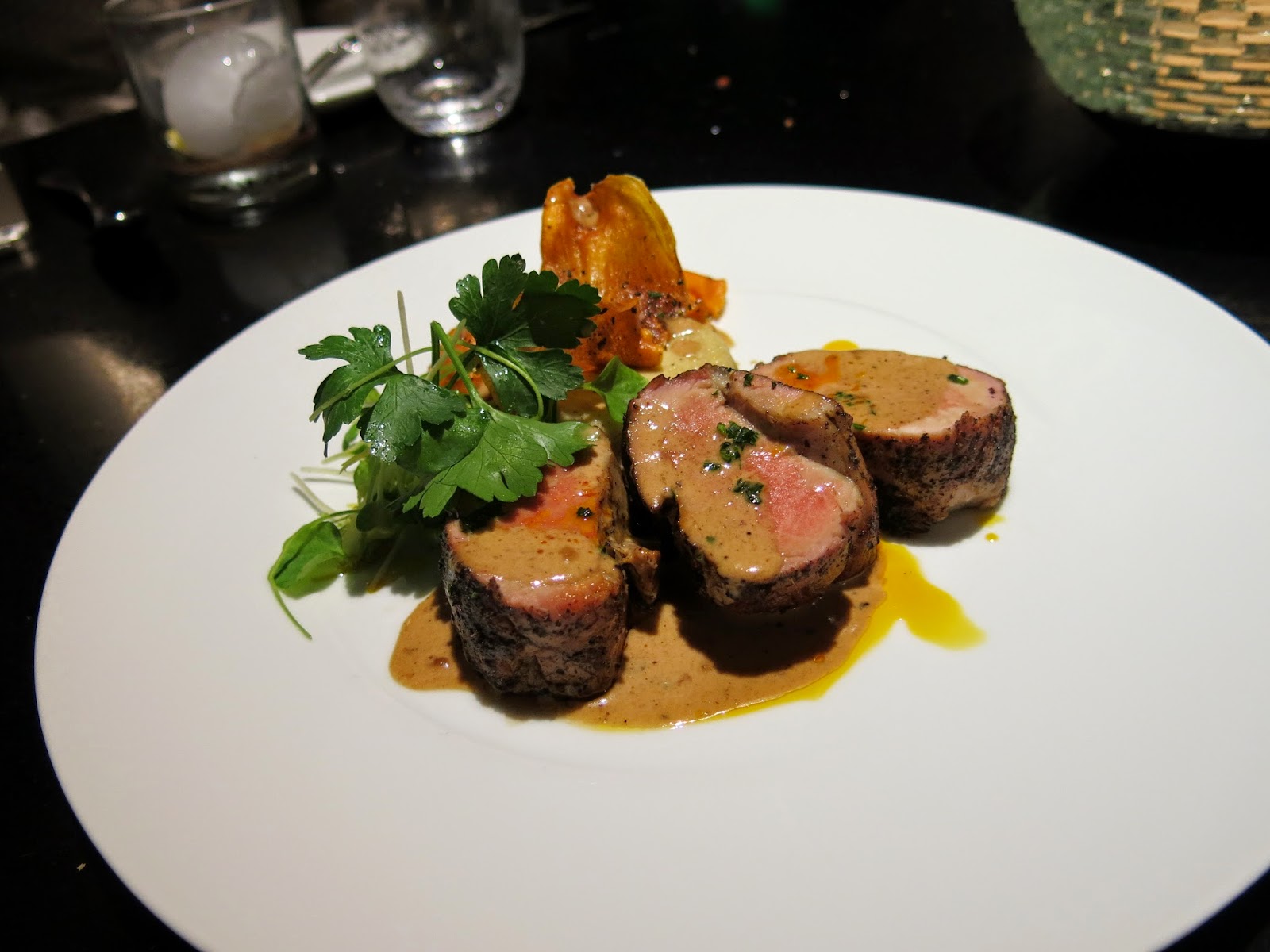 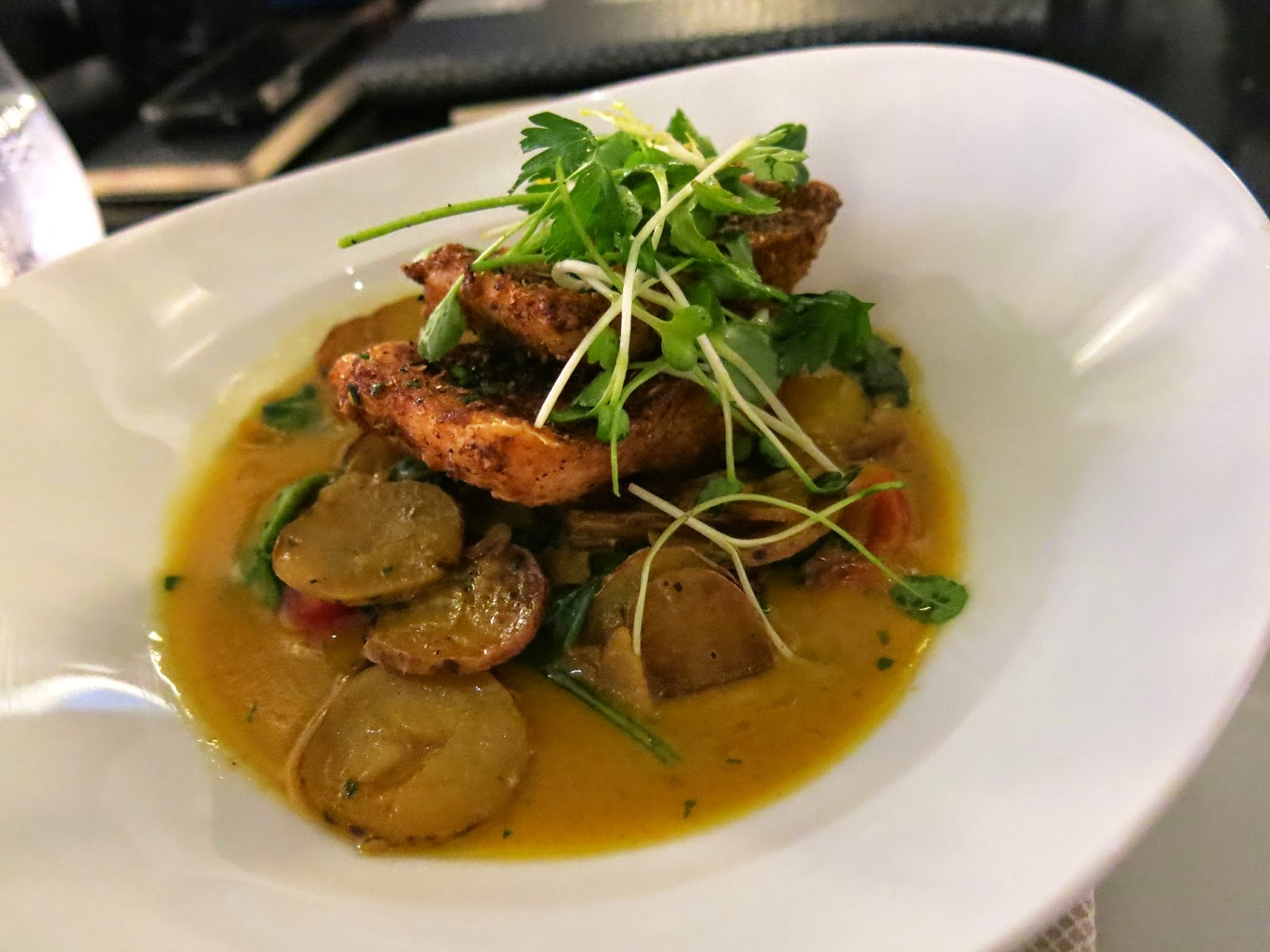 Following that came two main courses, Juniper Pork Tenderloin and Bronzed Walleye Pike.  The fish was melt away tender with bright saffron and citrus broth providing warmth and depth.  The thin slices of fingerling potatoes were also a nice touch, as were the miniature heirloom tomatoes.  The pork was truly masterful in it's moistness, with the pleasantly astringent juniper berries clinging to the outside of each bite.  It was served alongside a perfectly roasted garnet yam as well as an apple flan, which had again been doused with the mulling spices.  The flan was sweet and slightly tart with the mouth feel of a custard mixed with the fluffiest mashed potato one could imagine.  "Truly an brilliant take on a classic flavor profile," said Brandy, the giggling to herself, "Would you listen to me, sounding like one of those fancy television cooking show judges!  Another drink please!" 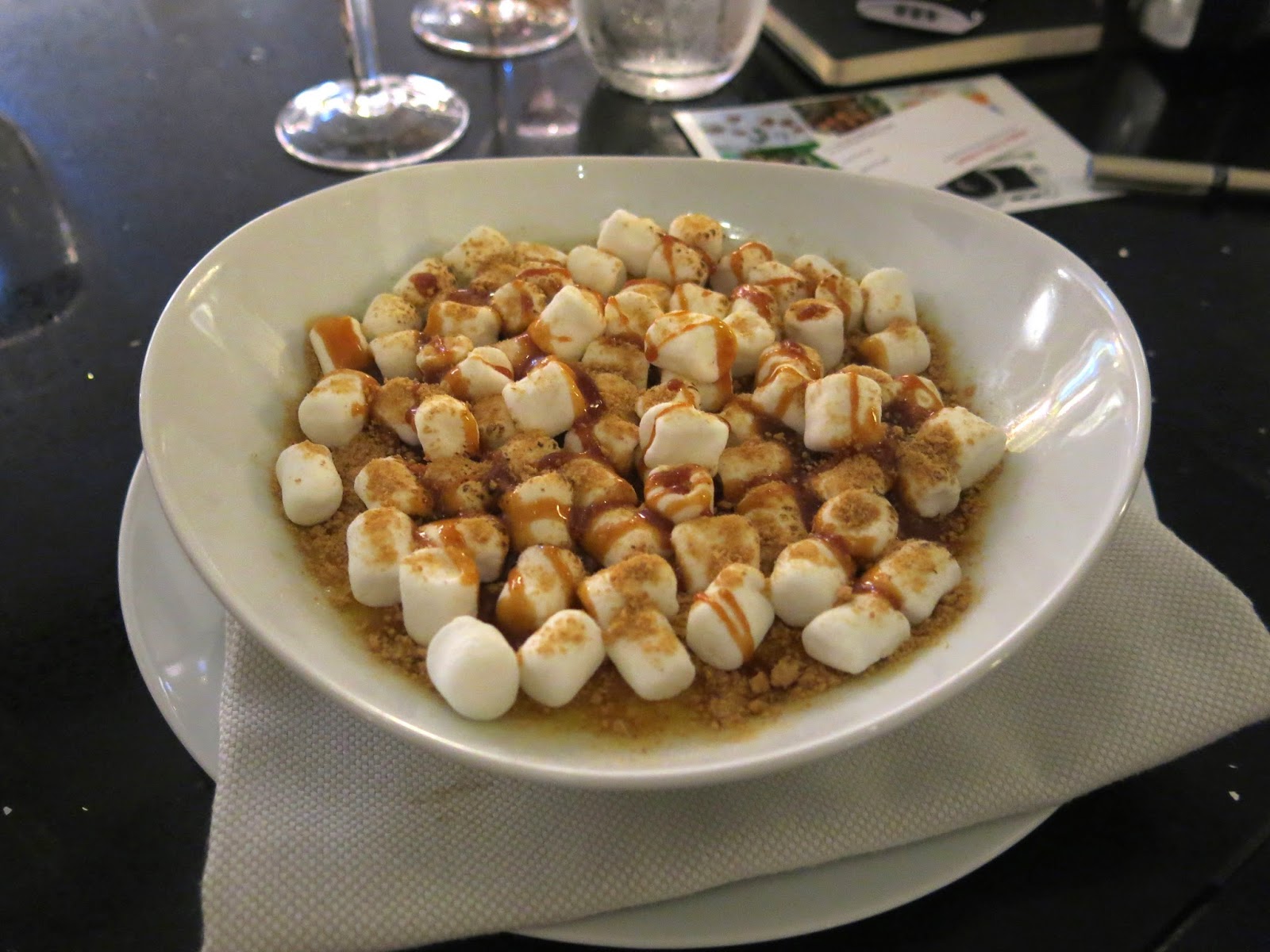 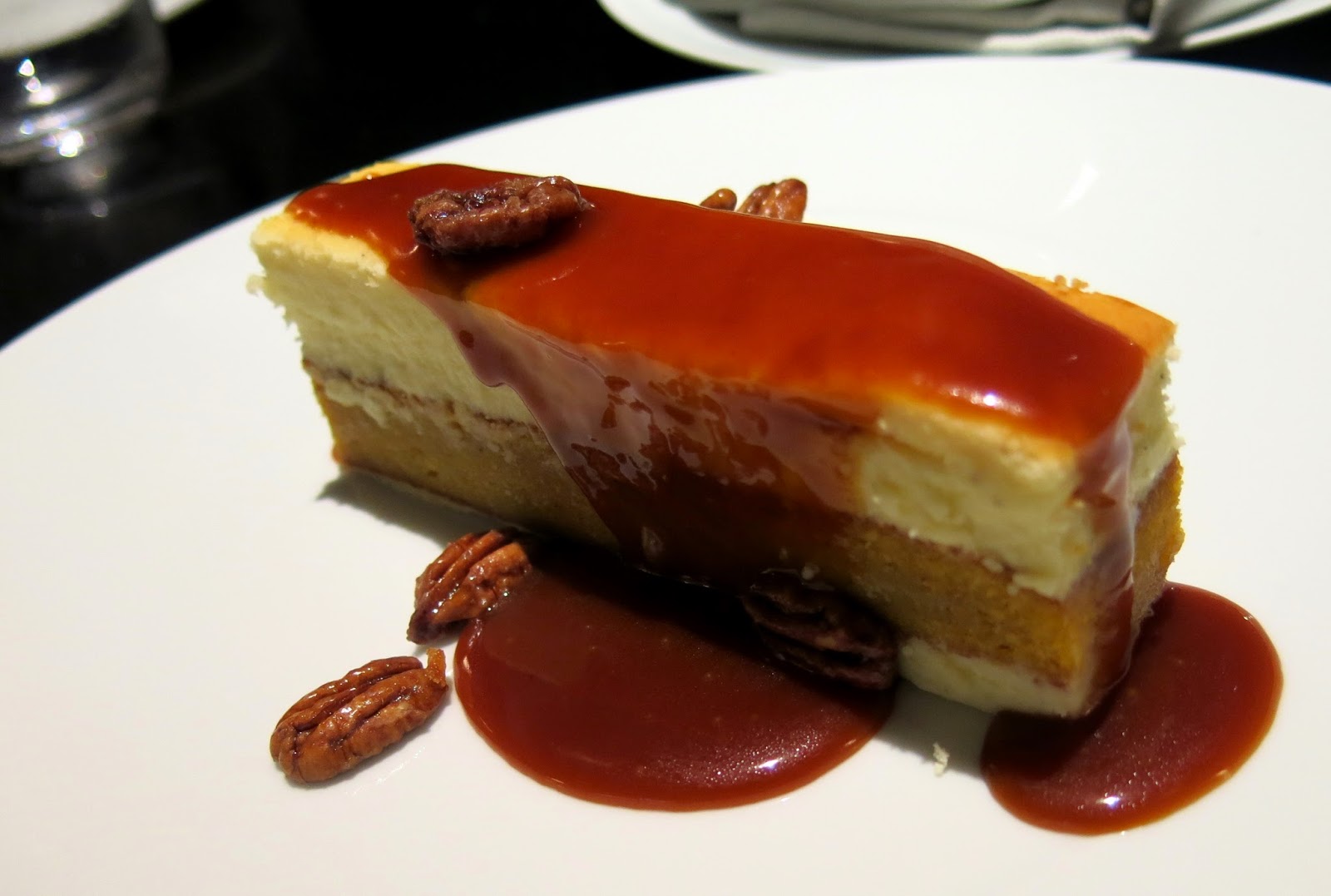 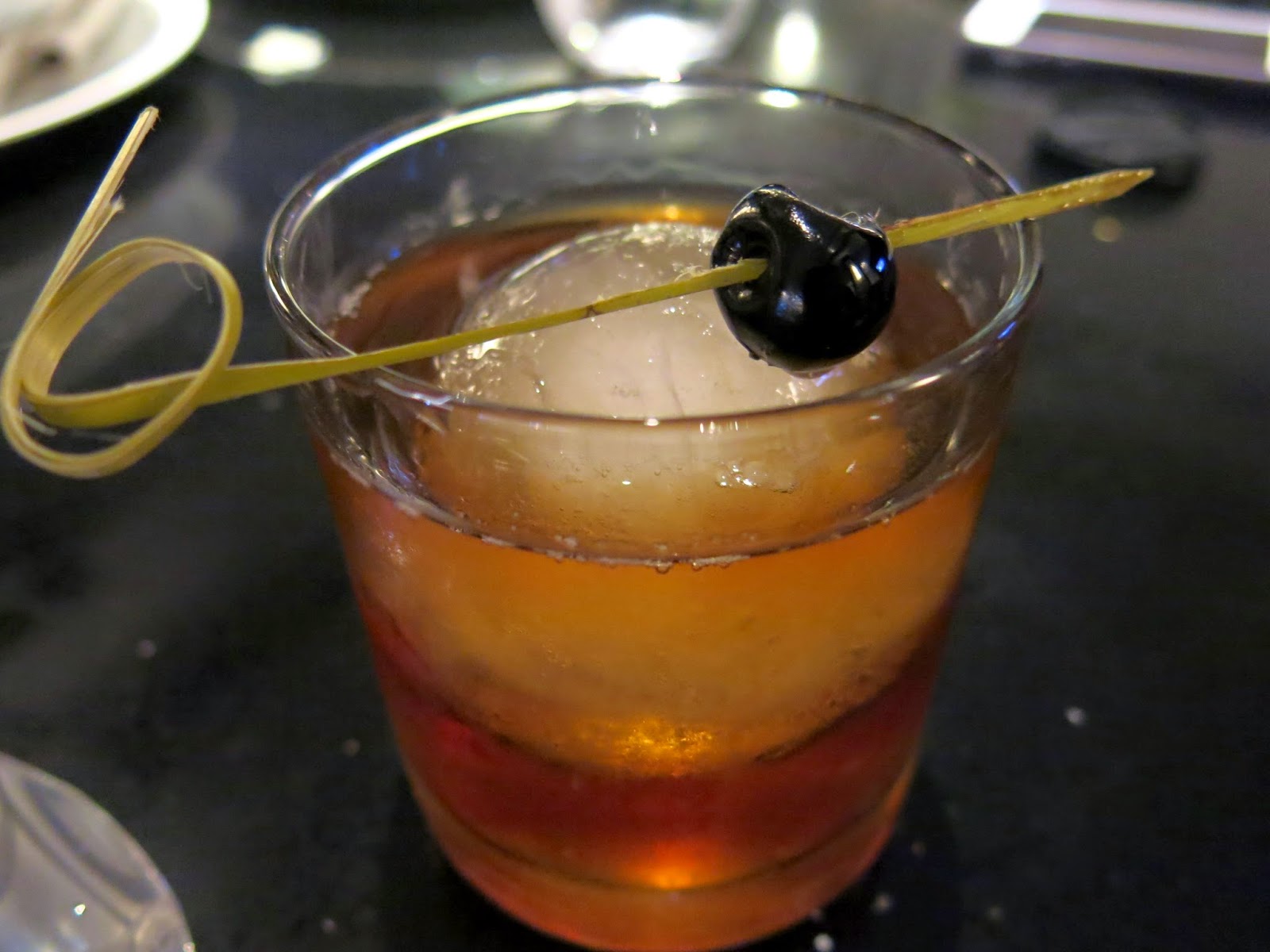 Brandy was brought the house Manhattan, which with it's smooth smokey taste proved to be a great match for the final course: dessert.  Two stunning dishes were brought to the table; a S'mores Creme Brulee and a Fromage Blanc Pumpkin Cheese Cake.  Chef Erazo admitted that while he wasn't a pastry chef, he was incredibly proud of both of these creations.  "You bloody well should be!" Brandy drooled.  The creme brulee was another bold combination of flavors, matching a smoky, melty chocolate with a thick eggy custard, graham cracker crust, and toasted marshmallow top.  "It's like a campfire in front of a Paris bistro!" Brandy exclaimed, reaching for another helping.  The cheesecake had a very unique base that almost tasted like the lady finger portion of a tiramisu, while the cheese portion was silken, contrasting nicely with the crunchy candied pecans on the top.  The whole thing was finished with a lightly salted caramel sauce, which Brandy debated asking for a jar of to take home.

As Brandy doesn't often get to go out for dinner (her expertise is in brunch, of course), she sometimes feels out of touch with Chicago's more fashionable foodies, but getting the scoop on this amazingly flavorful and well seasoned menu was truly an honor for her.  "After all the warmth and depth of that menu, I'm ready for the fall to arrive fully.  I may just go search the parks for a leaf pile to jump into!  Ok... that might be the Manhattan talking..."

The writers of this blog were invited to dine by the restaurant at no cost in exchange for an honest review.