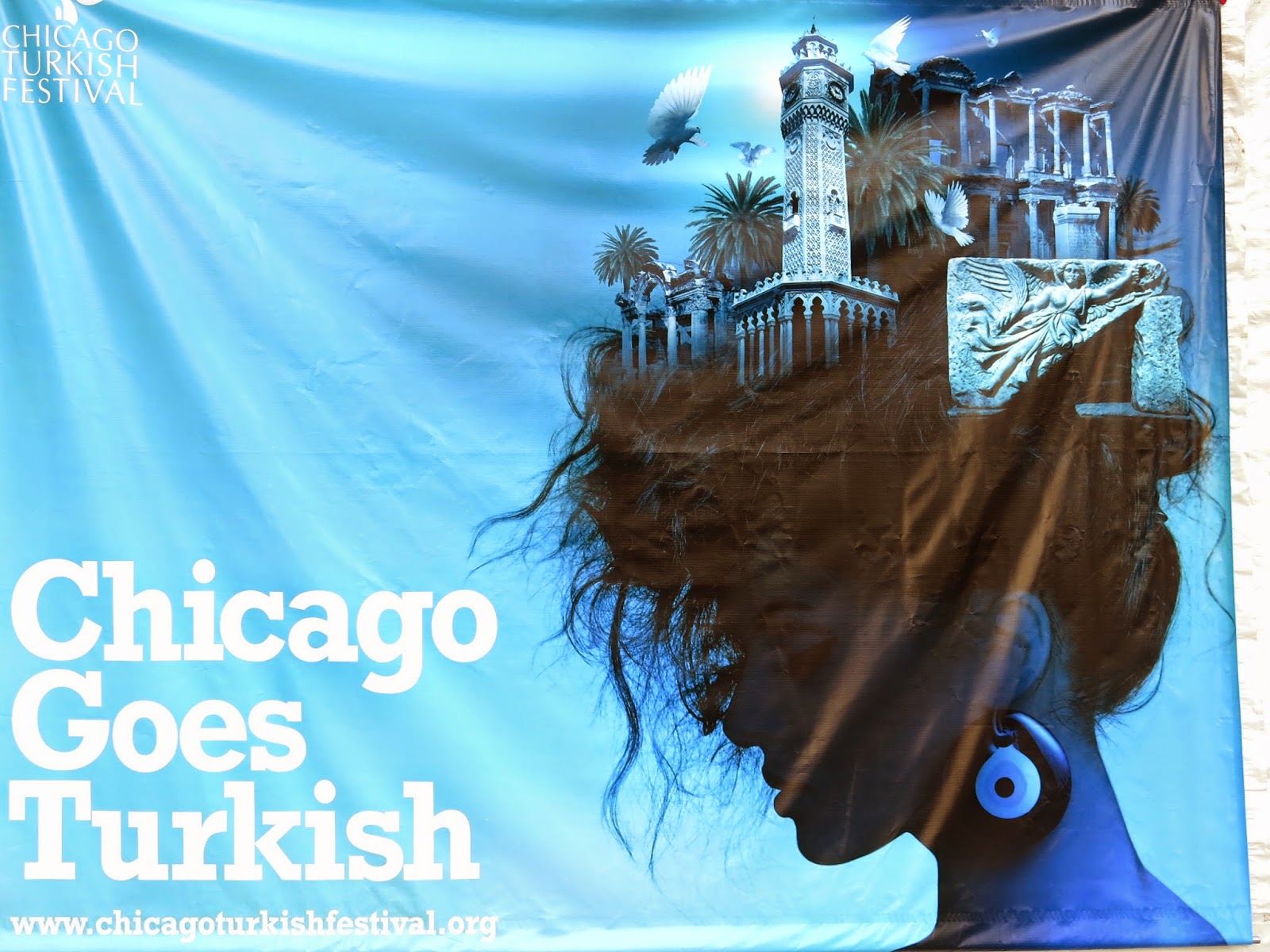 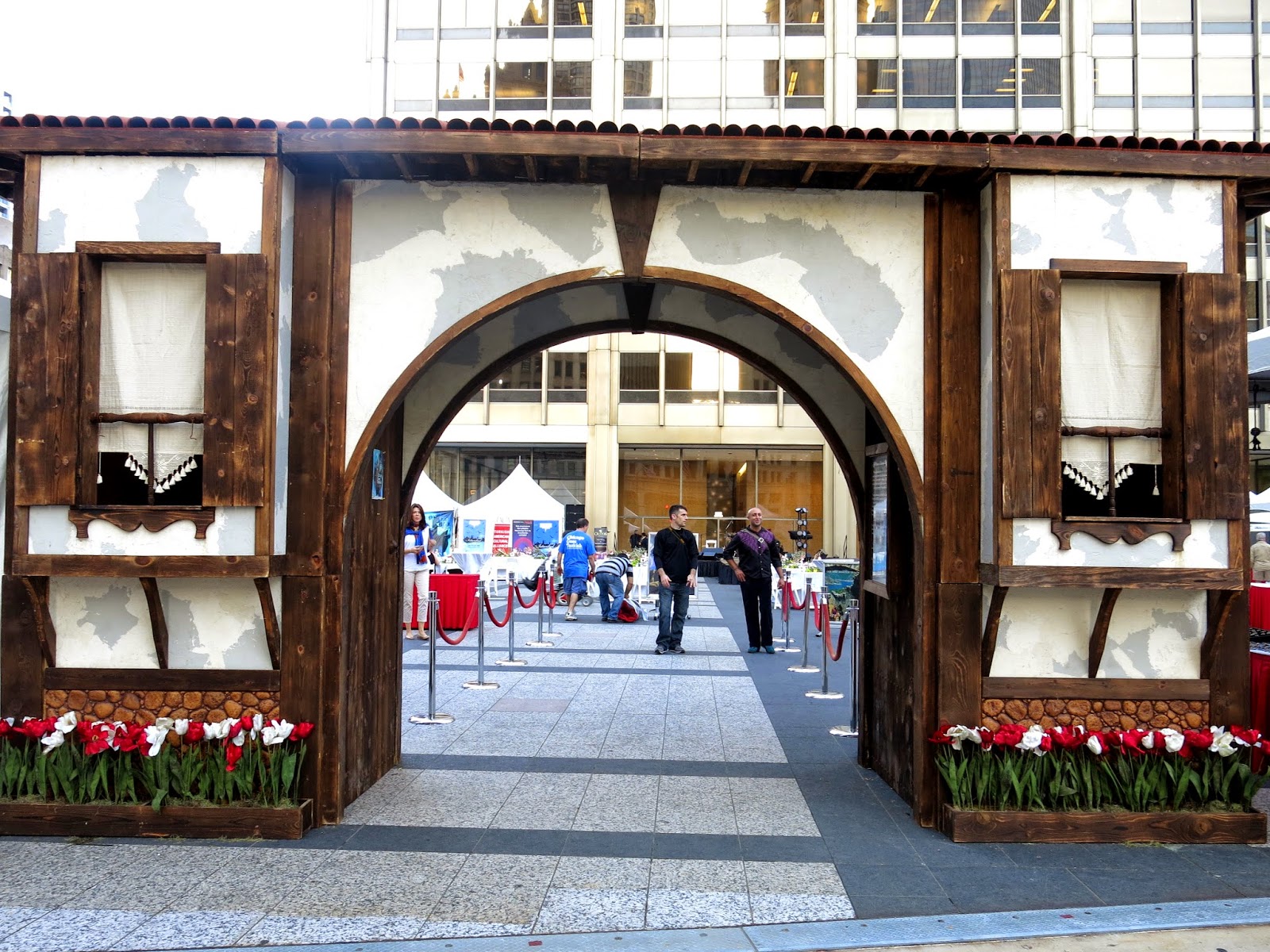 The bounty of festivals in Chicago is one of Brandy's favorite things about summer.  "The music, the food, the culture... It's too bad Chicagoans can't tough it through the winter and throw these things all year long," as Brandy says.  Of course, as she is so well traveled, some of Brandy's favorite festivals in the city are the cultural festivals, which celebrate Chicago's rich and diverse populace.  There's the Bastille Day festivities in July, which bring out the best in French food, Greek Fest, which is not, as it might seem, a collegiate initiation, but a celebration of all things Greek, the Southside Polish Festival, and so many more. 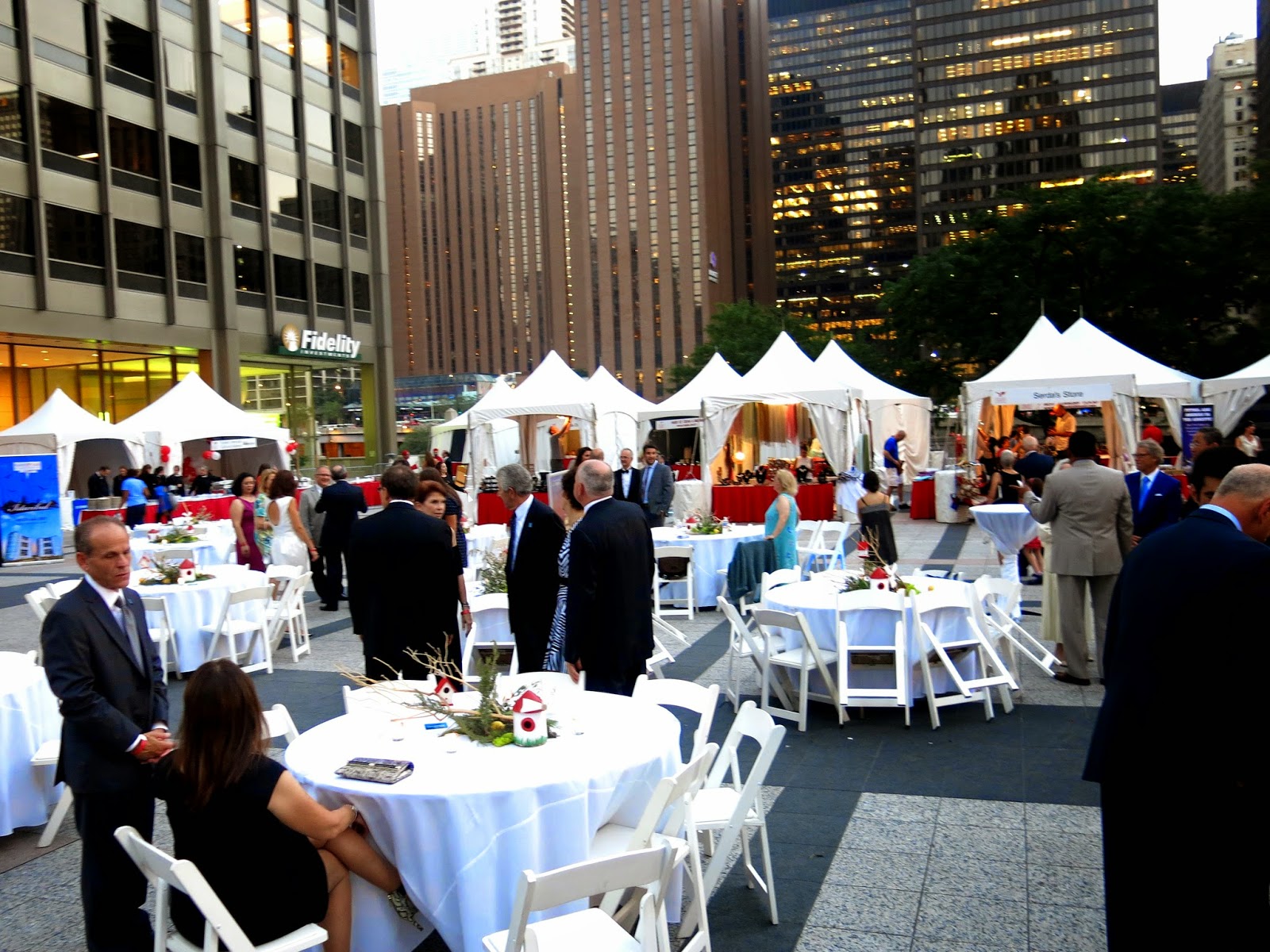 Thanks to her old friend, billionaire Barry Black, Brandy recently learned of a festival she'd not yet attended, the Chicago Turkish Festival, which ran from September 4-6 at the historic Pioneer Court, kicking off with an incredible gala dinner benefiting the Les Turner ALS Foundation.  "A gala dinner?  I better wear my fancy girdle!" Brandy exclaimed when she received the invitation from Barry to attend. 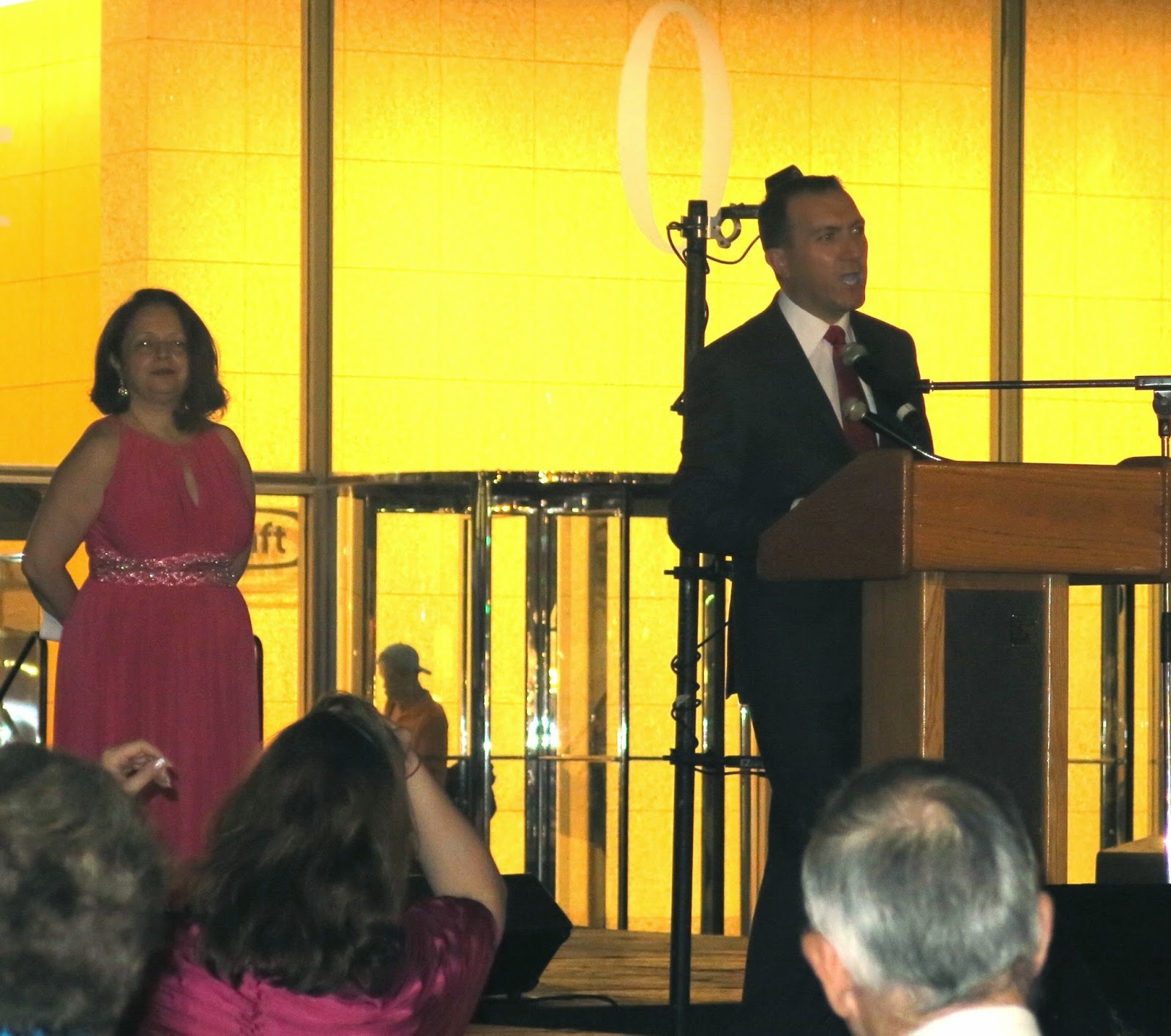 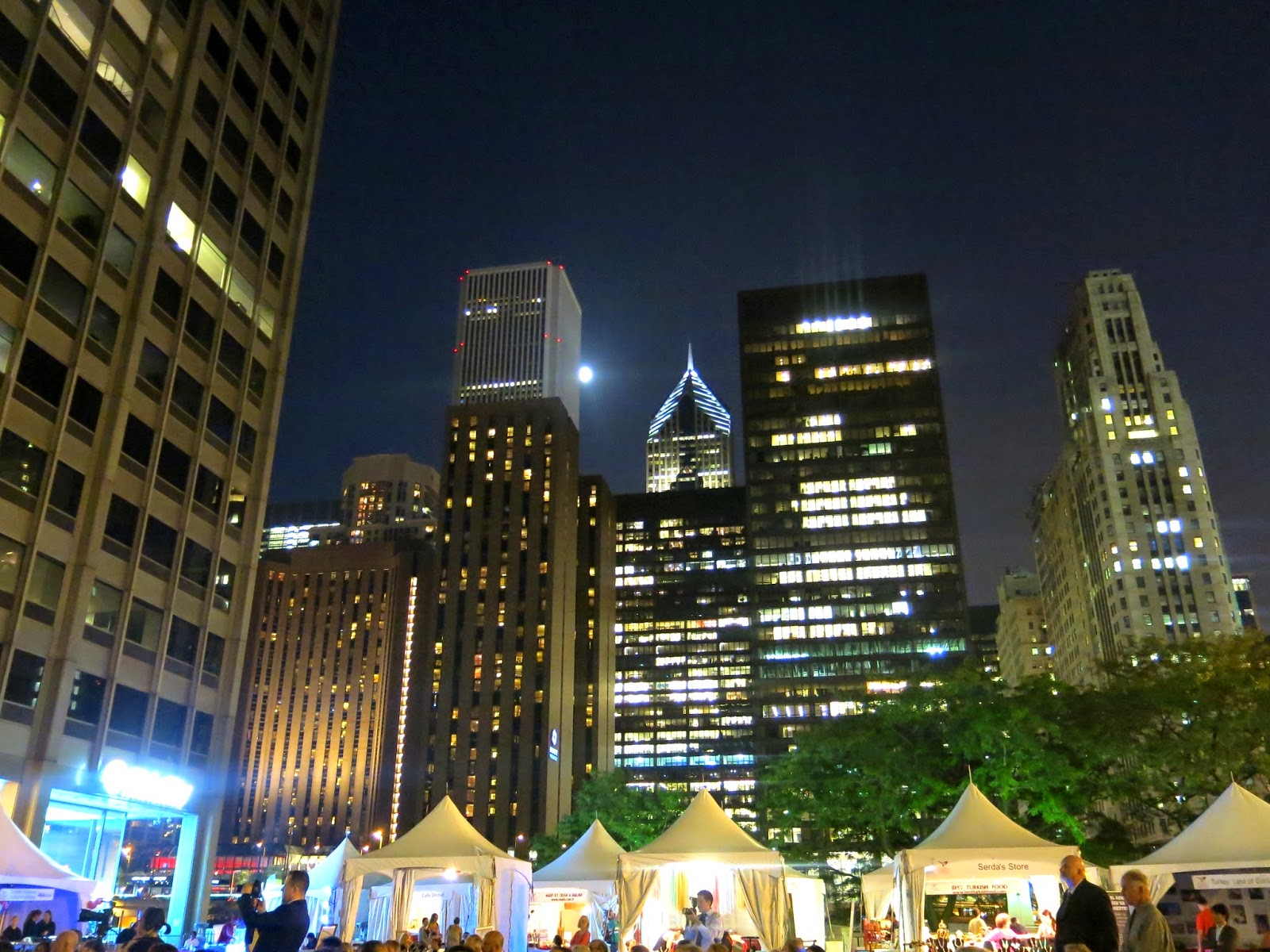 Each year, the festival celebrates a different Turkish city, and this year's featured city was Izmir, the home town of the Chicago Consul General of Turkey, Fatih Yildiz, who Brandy was lucky enough to be able to chat with before the festivities kicked off.  "It's one of the oldest ports in the Mediterranean.  It was a center for many different civilizations, from the Greeks to the Romans and the Turks.  Many Christians go there for a pilgrimage to the Virgin Mary's House, so it is also well known among Catholics," said Mr. Yildiz of his hometown.  Speaking about the history of Turks in Chicago, Mr. Yildiz had this to say: "We are not one of those heritages that goes back many many centuries in this city.  It's been 50 years or so since the first groups of Turks came here, but Chicago is a very special place for us.  Most Turks here are white collar, compared to the West or East coasts of this country, where we have more blue collar.  So it's a very vibrant community.  We have high expectations of life." 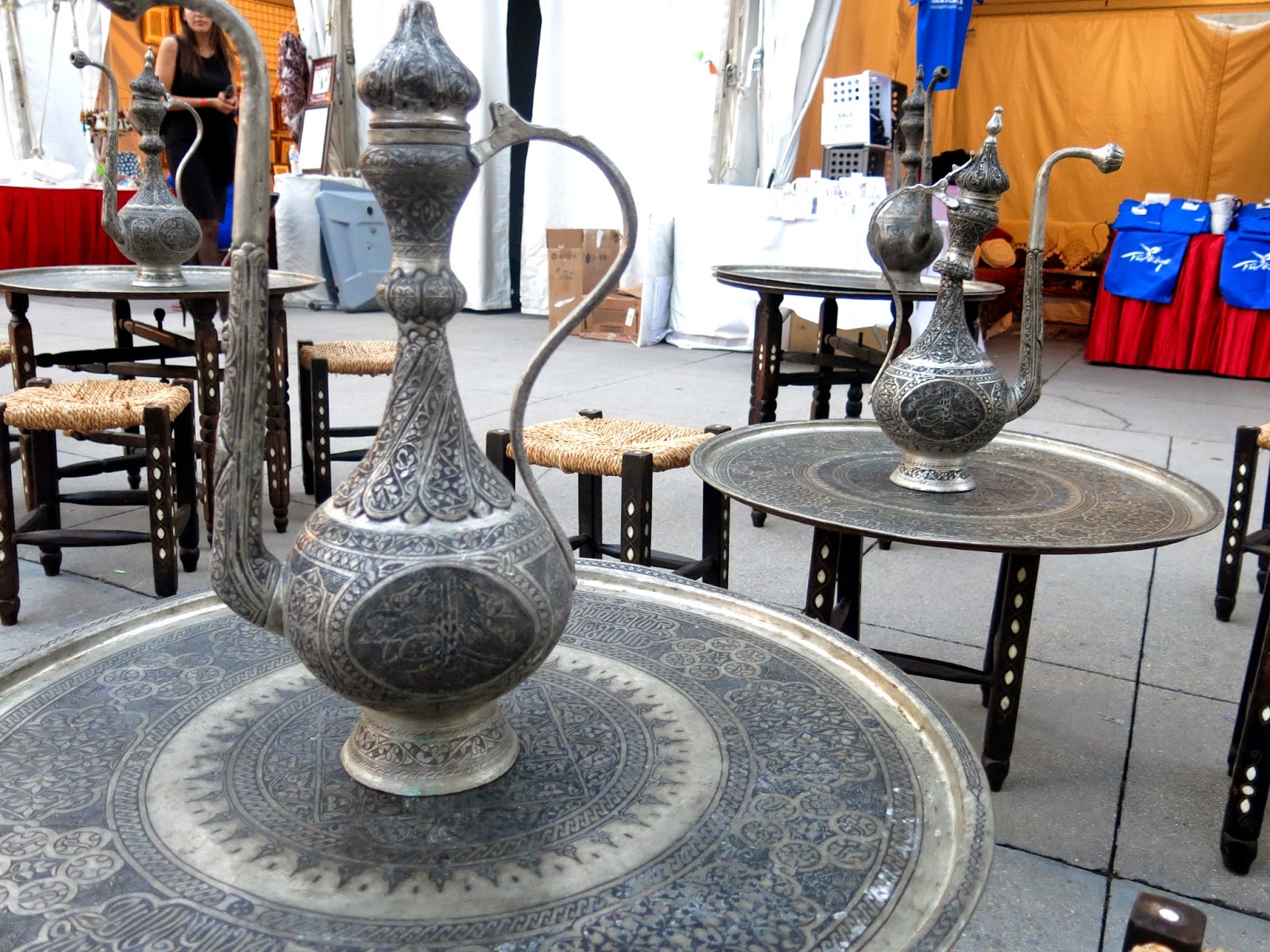 Of course, the real thing Brandy was curious about was what a traditional breakfast might look like in Turkey.  "[Turkish breakfasts] aren't very different from what you will see in other parts of the Mediterranean like Lebanon to Israel to Greece, but it is very different from American breakfasts," Mr. Yildiz described, "First and foremost, it's about great ingredients.  Really good tomatoes or cucumber, a wide variety of cheeses, olives and olive oil (again a very Mediterranean thing you can find in a Turkish breakfast).  We never have eggs in a simple scrambled way, but we have very unique ways of preparring them, like sometimes we combine them with certain meats, like sujuk [a Turkish sausage], which is sort of like an Italian sausage, but not as dry and very fresh.  Or sometimes we use pastirma [a spiced and dried beef, not unlike beef jerky] as well, which you can also find in Lebonese cuisine or even Greek.  In that region, sometimes there is a competition [when it comes to food] of who can do it best.  Like we even do baklava too, and we sometimes fill filo dough with spinach and feta cheese [called borek in Turkey and spanakopita in Greece], which you can again see in other parts of the Mediterranean." 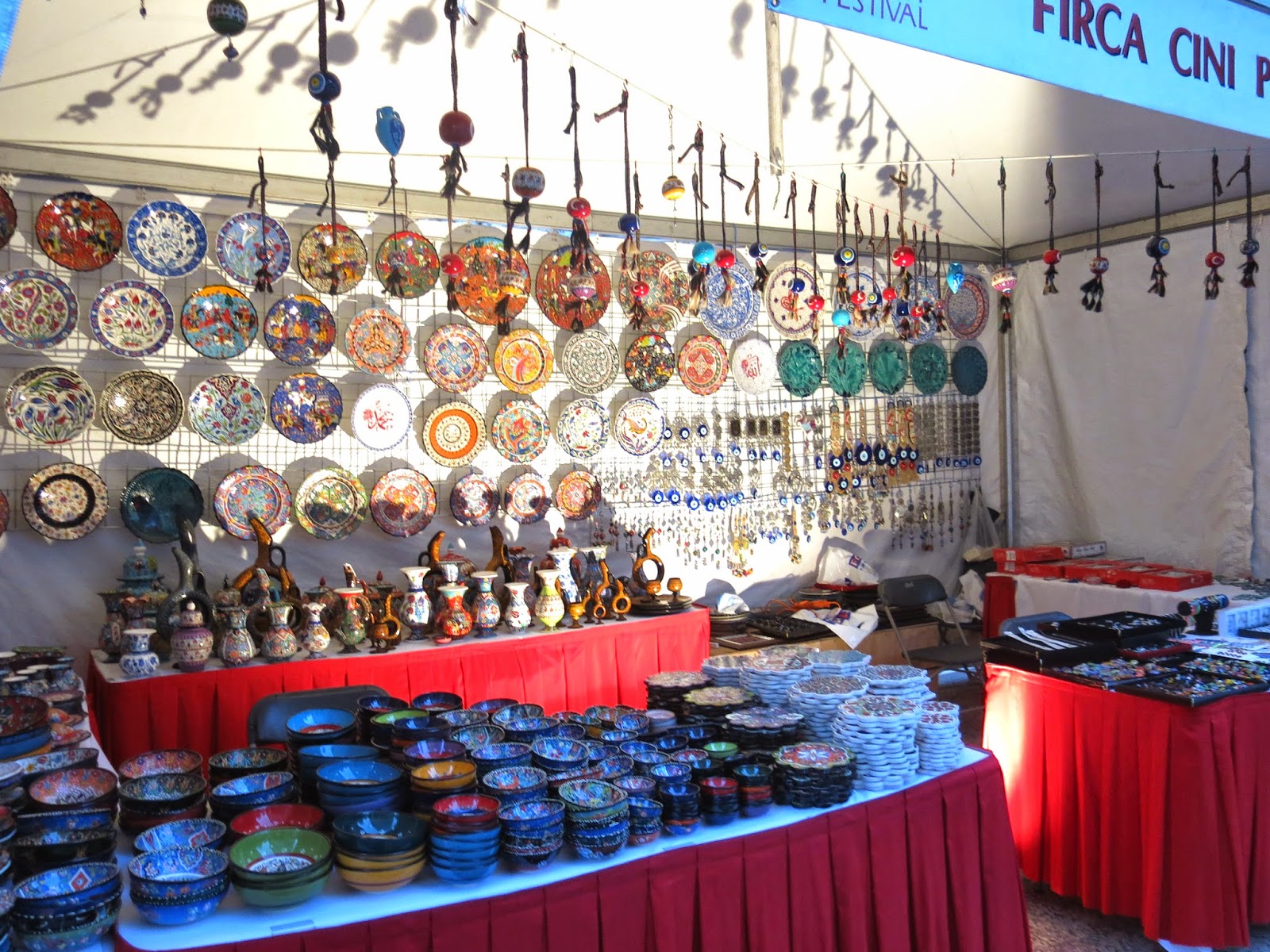 This year marked the festival's 12th anniversary and featured a incredibly lively weekend of Turkish food, performances, and pure celebration.  The festival hosted lots of vendors and artisan craft makers, who all showed their wares with pride and panache.  There was beautiful jewelry made from carved metals and polished stones, gorgeous mosaic tiles and cookware, handmade miniature wooden windmills, and wrought iron tables and chairs.  Of course, there were plenty of food stalls for Brandy to gravitate to, like the world famous Kahramanmaras Turkish ice cream, and of course small, dark cups of strong Turkish coffee.  There was even a stall selling Turkish cookbooks  to those wishing to broaden the horizons of their kitchen tables. 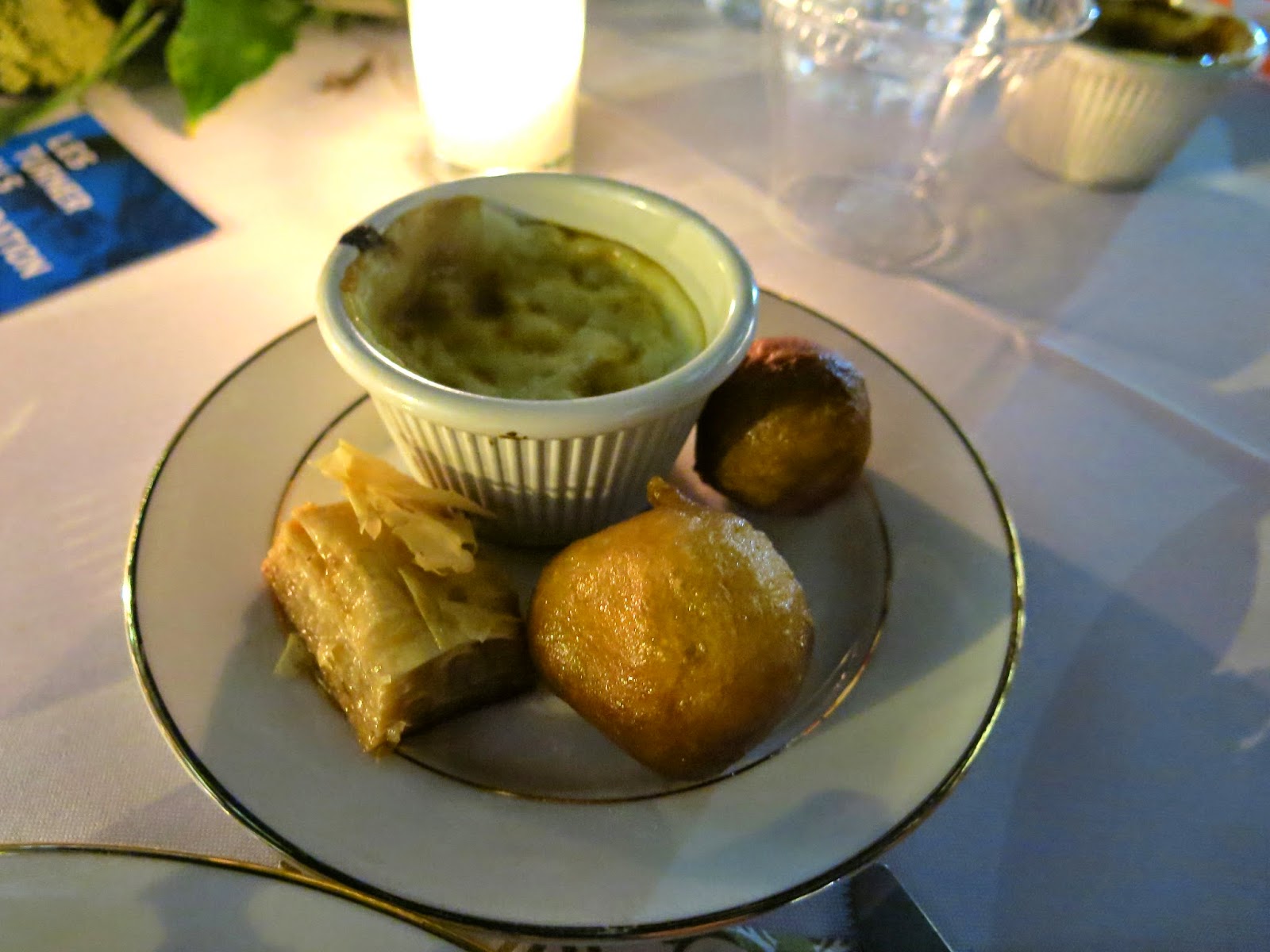 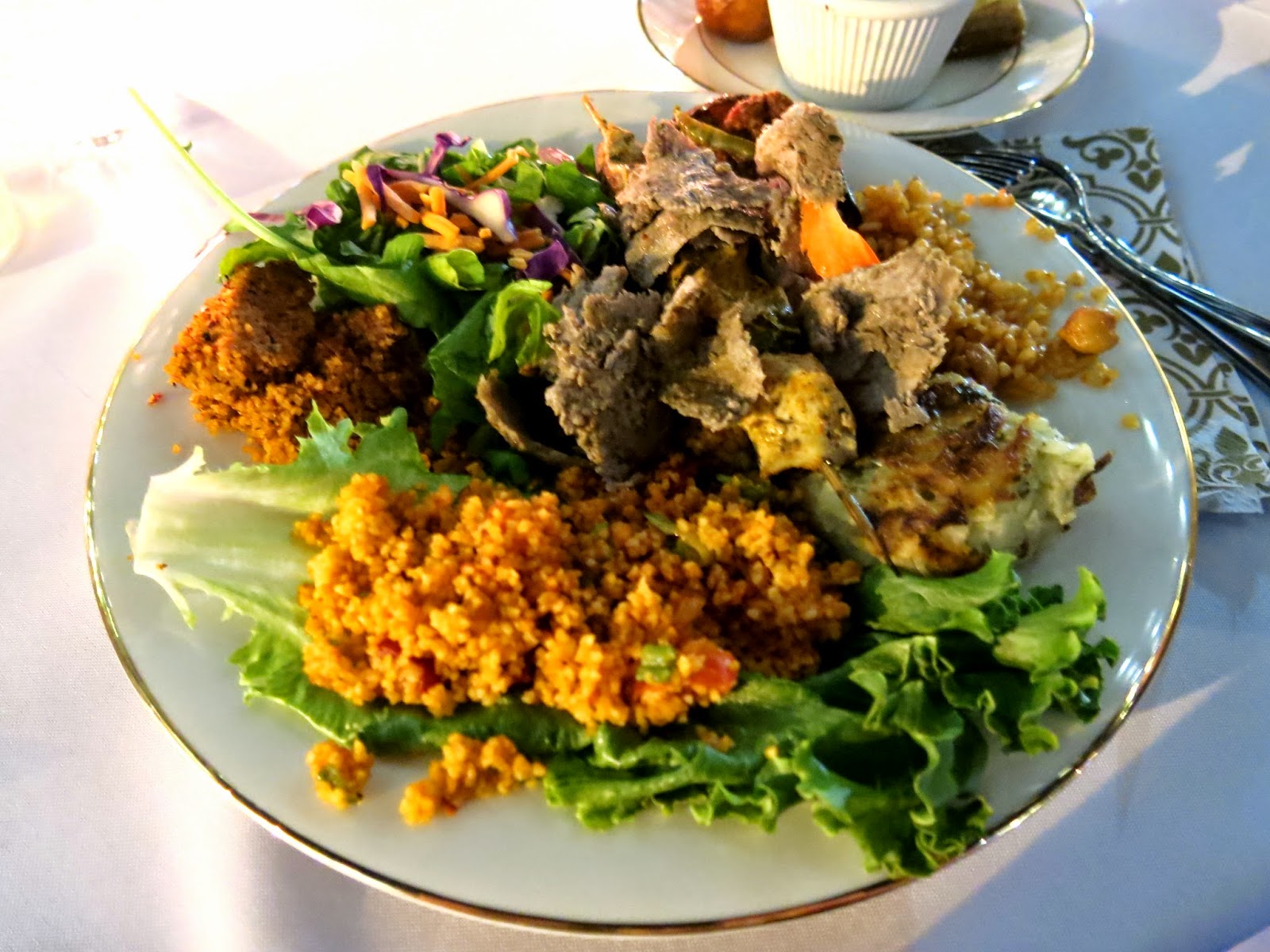 The dinner was a cornucopia of Turkish delights; among Brandy's favorites were the chicken and beef shwarma kebabs, smoked eggplant musaka, tabuli salad with cracked wheat and veggies, cucumber and yogurt spread with fresh pita, couscous, and for dessert some sticky sweet baklava, a honey coated fried dough ball, and a delicious baked rice pudding.  "Turkish food is so colorful!" Brandy said approvingly, while Barry surreptitiously wiped a drop of yogurt sauce from his incredibly expensive tie.  Some of the food had been supplied by local Turkish restaurants like Turquoise Cafe (otherwise known as "The Lost Brunch Review" to Brandy) and Cafe Orchid, while Kavaklidere supplied some nice Turkish wines and Efes served up their signature brew in the beer garden. 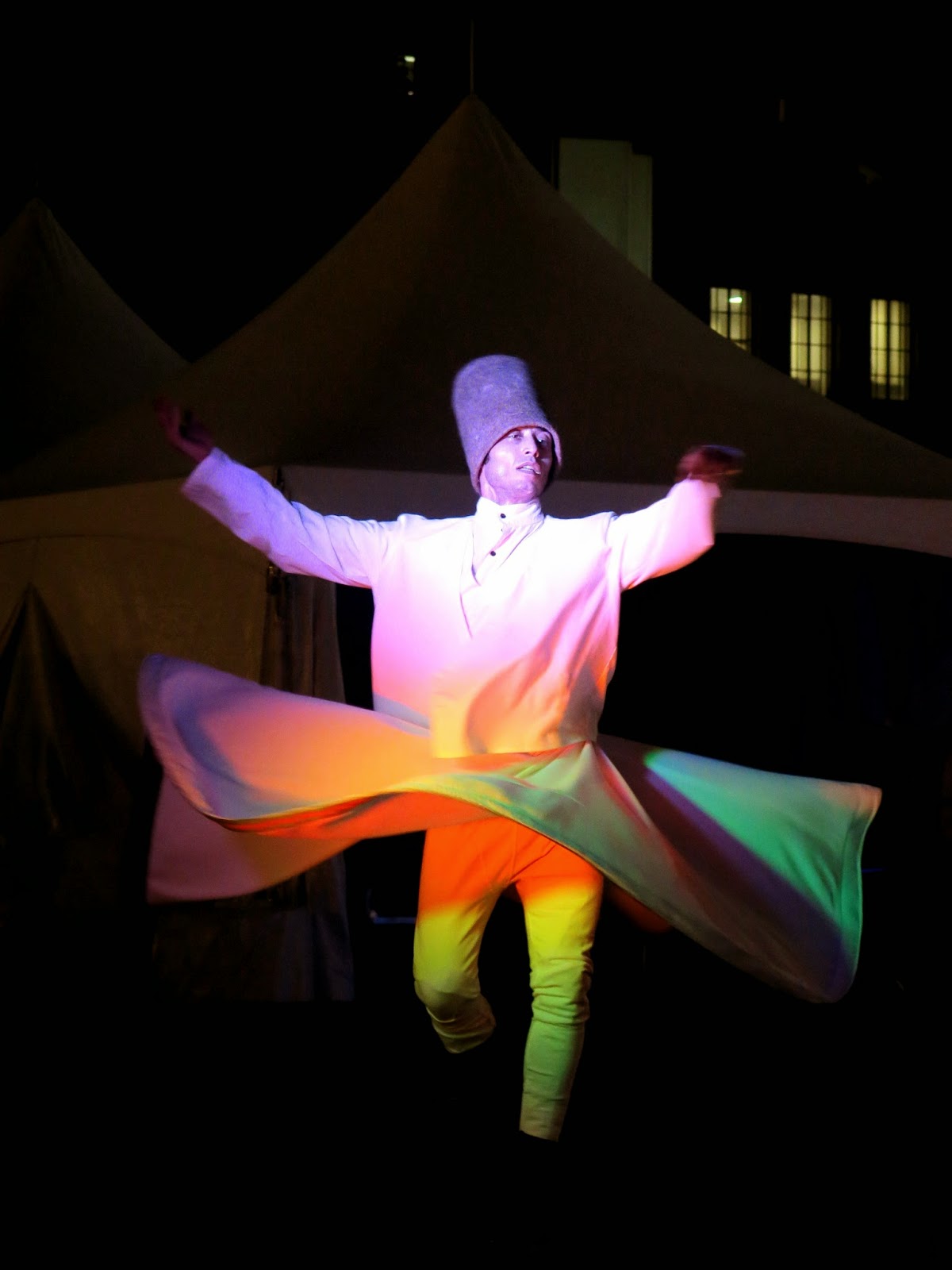 The entertainment was the true highlight of the evening, starting off with the Ottoman Empire Marching Band, a traditional drum line used to hype up the Turkish army before they went into battle (fittingly, the band did their march as people began to line up for the dinner buffet).  After that, a host of extremely talented and mesmerizing dancers took the stage, delighting the crowd with not only their traditional and modern folk dances, but also with their extraordinary costumes, all of which glittered with a rainbow of colors under the stage lights.  The crowd favorite was the Whirling Dervish, a single man performing the half dance half meditation practice of the quasi-Islamic Mevlevi Order.  "I could do that," Brandy said, watching the man on stage swirling gracefully.  "Ah, but could you do it without feeling dizzy?  That's the trick," Barry countered.  "I've had a bottle of that Turkish wine already and I don't feel dizzy.  I'm pretty sure I could handle it," Brandy responded. Following the dancers, a stunning fashion show took place, featuring works by students from the Izmir Olgunlasma Fashion Institute, who had designed wedding dresses themed on various ancient goddesses and even one gorgeous piece inspired by the Turkish flag. 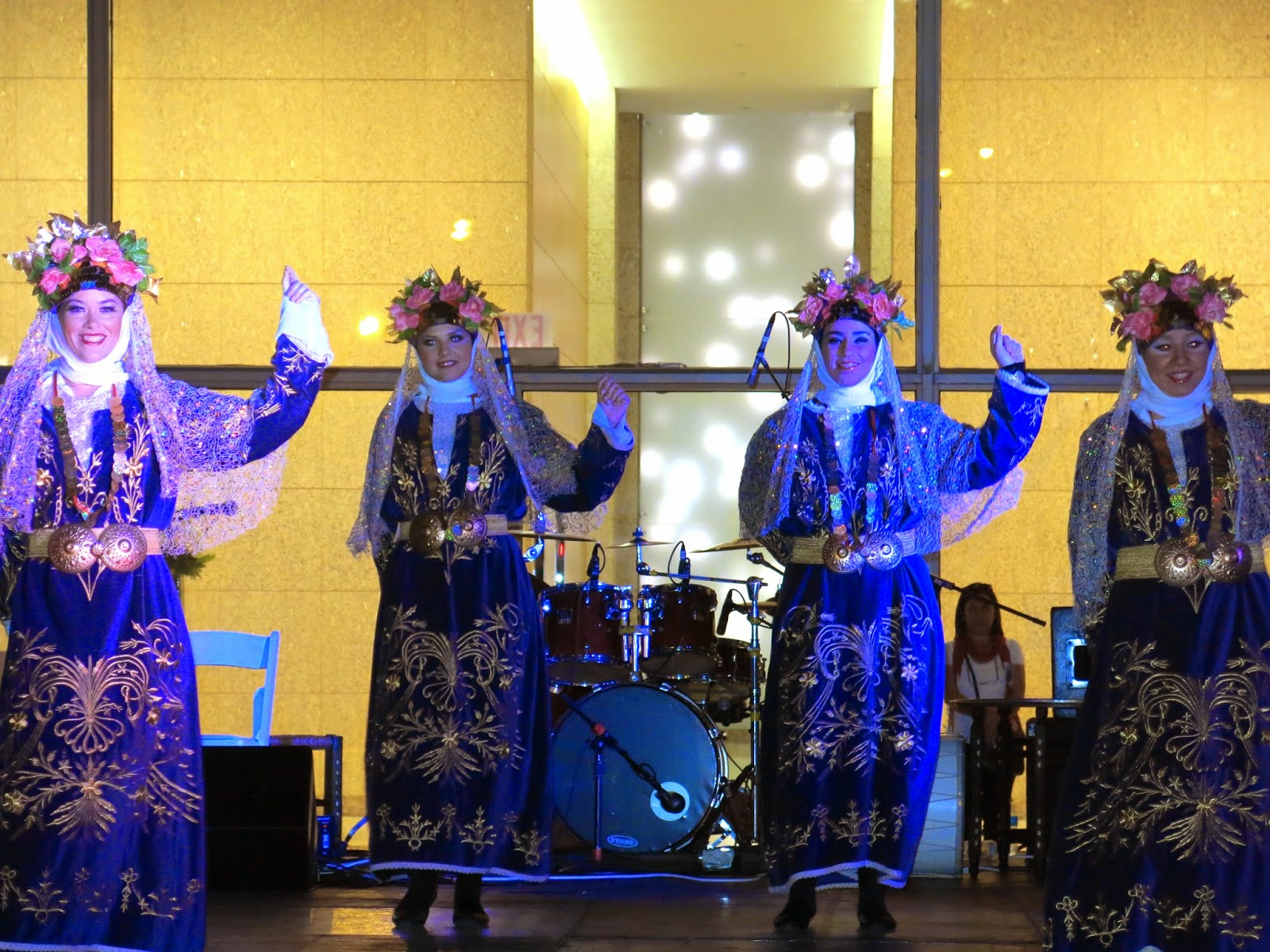 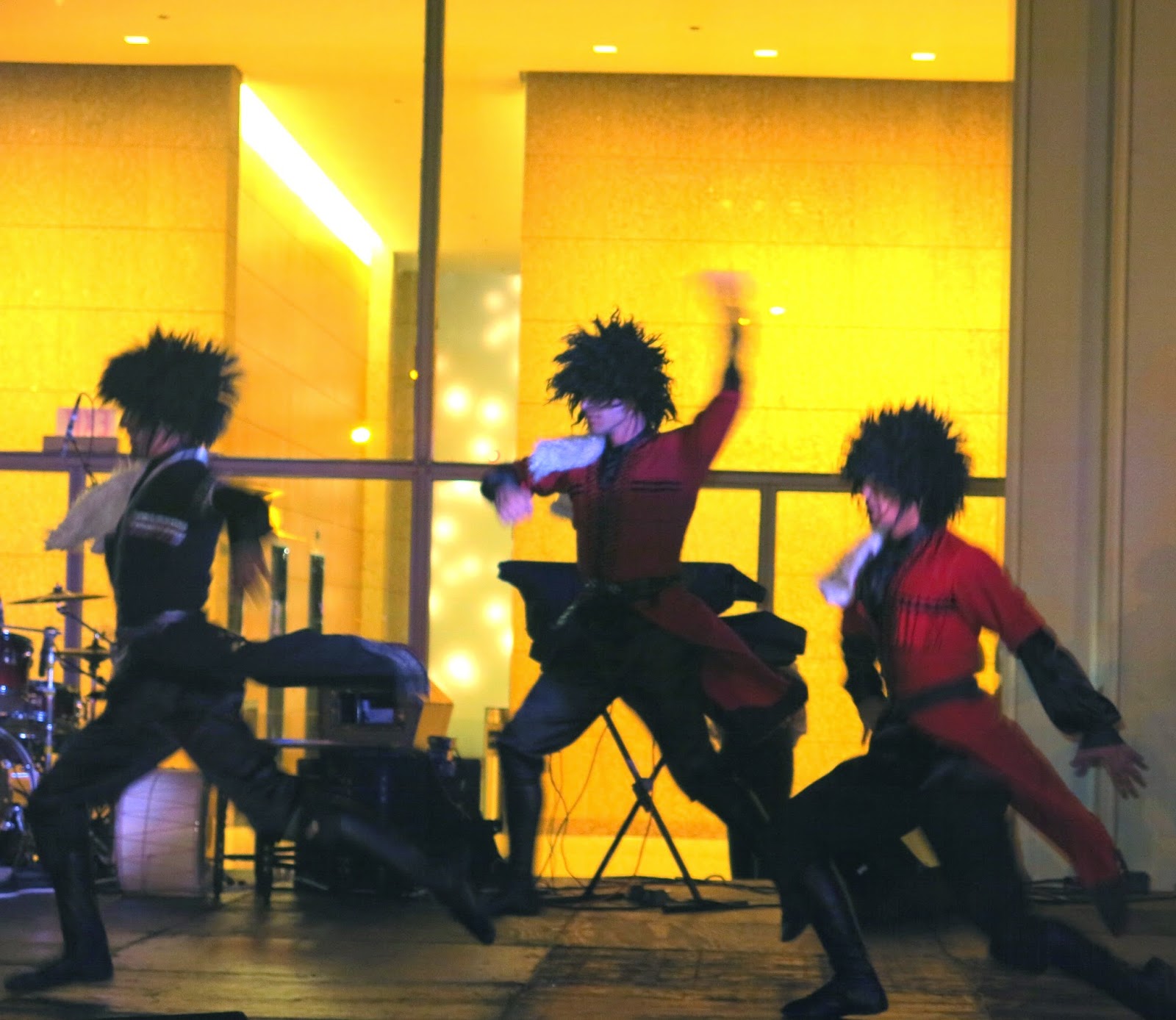 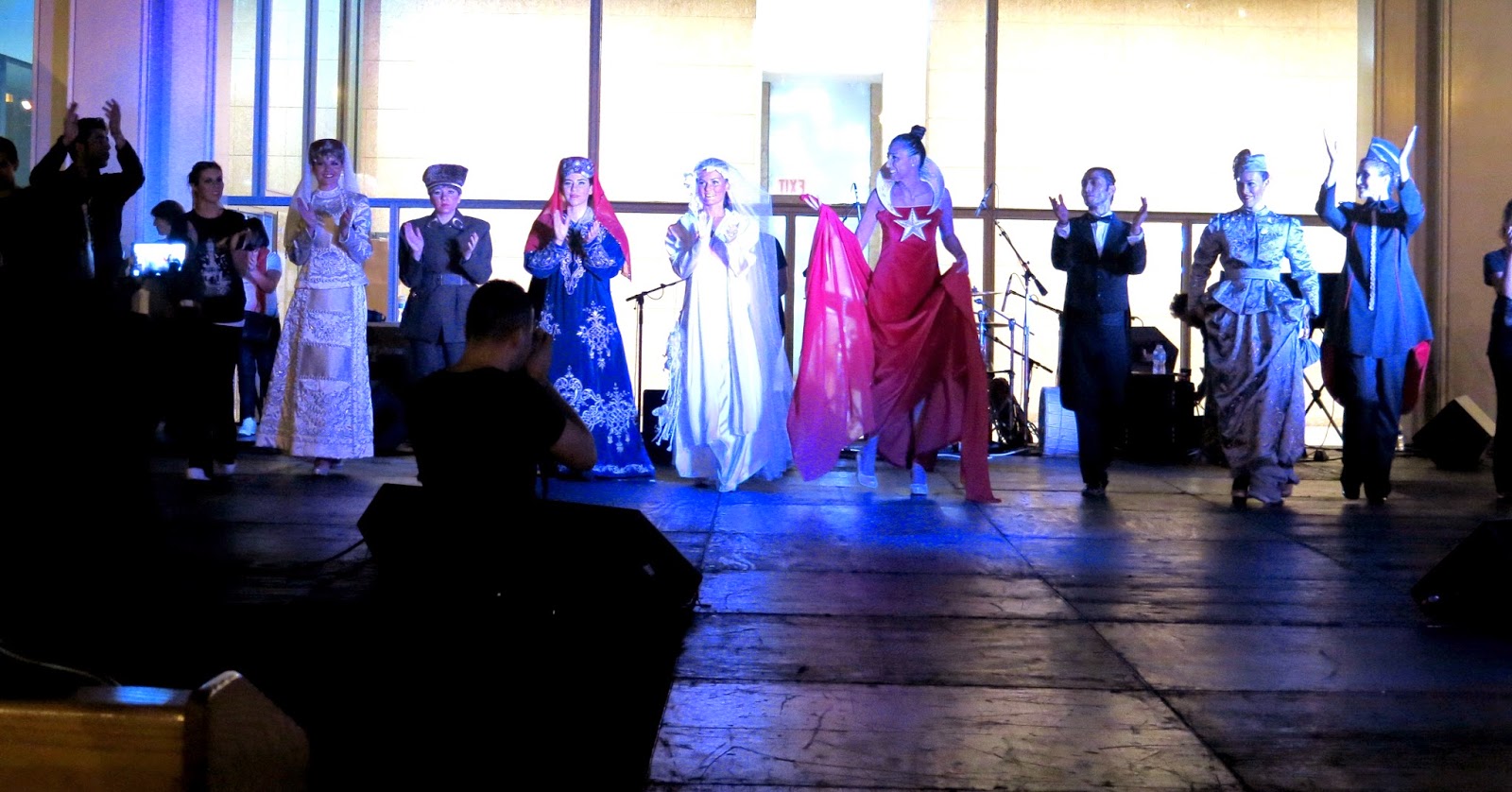 Brandy was so impressed with the dynamic and exciting variety of the Chicago Turkish Festival that she vowed to add it to her on going list of must visits for next year.  "And maybe then I can join the Whirling Dervish on stage," she chided Barry, "Or at the very least, I'd like one of those spangly belly dancing costumes!"

The writers of this blog were invited to the gala diner at no cost to facilitate the writing of this post.
Posted by Bunny and Brandy at 10:45 AM