MOD Pizza or For Love of the Toppings 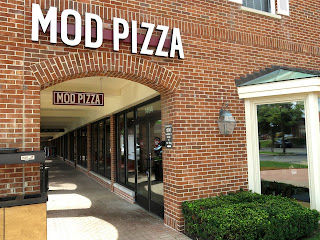 It may surprise some to learn that Brandy, on occasion, has been known to have some athletic interests.  Besides her title as a world clogging champion and heading up an all star bowling league, she has also developed a rather passionate interest in baseball since moving to the States all those years ago.  "I'm a firm believer that one should always make an attempt to understand the culture of the country they are currently in, and as far as I can tell, most of American culture can be summed up by baseball," Brandy says, "It's all wholesome and fun on the surface, then there's a level of intense energy that doesn't always get released in the way one wants it to, then there's a level of subterfuge and strategy that no one ever acknowledges.  And also there's hot dogs and beer." 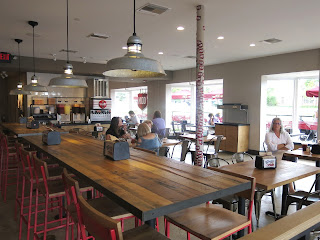 This fascination with American culture is what led Brandy into accepting the position of manager for an amateur baseball team, consisting entirely of former major and minor league baseball players who all just happened to be foodies.  The team (called the Chicago Corndogs) recently found their way into the Midwest Very Un-Professional Baseball League play-offs, much to the surprise of pretty much every player and coach, except, of course, for Brandy.  Cool as a cucumber with her best Sunday hat on and a cup of tea in her hand, Brandy managed to guide the team into clinching their division with an offensive display of 54 runs (they set a record for hitting 5 grand slams in the first inning) while her starting pitcher tossed a perfect game consisting of only 30 pitches.  To celebrate their unprecedented victory, Brandy decided to treat her team to brunch after the game.  "Baseball teams usually get pizza after a game, not Eggs Benedict," one brave infielder explained to her.  "Well then, pizza it is," she said, begrudgingly. 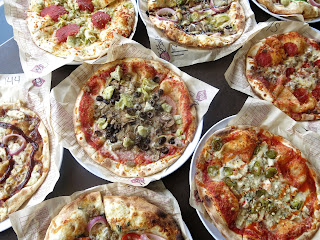 Knowing not just any old pizzeria would do for a team full of cultured palates, Brandy zeroed in on MOD Pizza, a fast casual chain of pizza restaurants, serving up unusual combinations of fresh toppings, sauces, and cheeses on a chewy Asiago infused crust, all cooked up fresh and fast in a brick oven in about 5 minutes or less.  The open and sunny space of the Glenview location gave Brandy's boys a chance to stretch out and relax, while the classic rock soundtrack provided Brandy with an immediate reason to smile as she took stock of her ordering options.  Pizzas came in pre-determined combinations for those wishing to simply point and pay, but could also be customized from the ground up for those wishing to express their culinary creativity.  With each medium sized pizza coming in at less than $8, Brandy could hardly resist ordering as many pizzas as the oven could hold to satisfy her team and give her a good taste of everything. 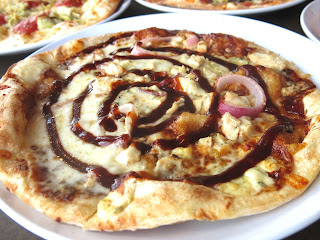 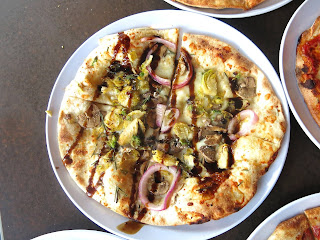 Brandy managed to try three different pizzas from the group before the team demolished them completely.  Firstly, she tried the Caspian, a BBQ chicken pizza with Gorgonzola and red onions.  Brandy very much liked that the BBQ sauce wasn't too sweet and had a good amount of heat and smokiness to it.  Though the flavors were rich and bold, the thinness of the crust and deft hand applying the toppings ensured that the pizza was still fairly light. 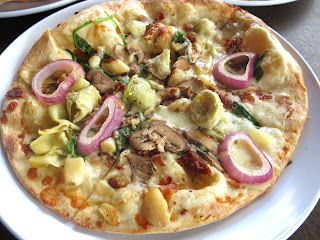 Secondly, Brandy went for the Sienna, a special seasonal pizza with garlic, mushrooms, rosemary, a few cheeses, roasted Brussels sprouts, and a drizzle of fig balsamic glaze.  Brandy loved this sweet and savory combination, even though on paper it sounded a little odd for a pizza.  The rosemary added a nice complexity to the flavor, which was kicked off by the sweetness of the balsamic, but the star of the show was most definitely the Brussels sprouts.  "What a lovely combination of summer and fall!" Brandy exclaimed, "Just like a baseball season."  The Asiago cheese that was baked into all of the crusts was an especially nice contribution in this pizza, giving it a little nuttiness as well.

Lastly, Brandy decided to build her own pizza creation.  She started off with some white sauce, then added some garlic rub and mozzarella, following that up with mushrooms, artichokes, spinach, bacon, and even more garlic.  The Brandy, as Brandy decided to call it, tasted like a delicious spinach artichoke dip with a side of garlic bread for dipping.  "Oh, I think I've really made something special here," Brandy grinned, "I think my little concoction should be put on the menu immediately.  Or maybe I should help them create the ultimate brunch pizza!  With bacon and poached eggs and shrimp and grits on a French toast crust with a maple syrup glaze!"

Now fully carb loaded, the team packed up their gear and prepared to head home.  "Hey guys?" pipped up the catcher as he checked his phone, "Did anyone else realize we were supposed to play a double header today?"  A collective groan went up from the players as they all suddenly realized their mistake.  "Well thank goodness those pizzas were light, fresh, and fast, hu boys?" said Brandy, "Let's go win two!" 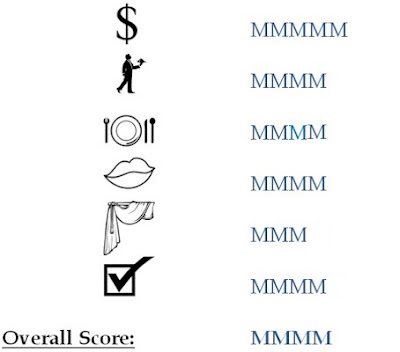