From the Kitchens of Bunny and Brandy: Fig Mascarpone Hot Cereal and Hamilton Beach GIVEAWAY! 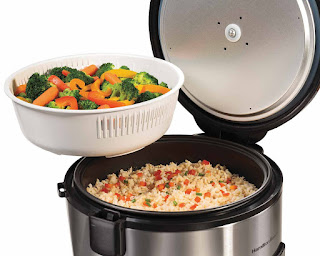 "I can't find anything in this kitchen any more!" Brandy exclaimed one morning as she sifted through her counters to find the appliances and tools she needed, "How on earth did I accumulate all this brick'a'brak?"  The problem was that Brandy is a kitchen gadget addict.  Everything from shiny garlic presses to non stick panini grills to zucchini noodle makers lined her kitchen counter, making it impossible to get even the simplest prep work done.  "That's it," she exclaimed, "I'm tossing out everything that doesn't have versatility!"

And so she began to test each and every one of her gadgets and doo-dahs and appliances to make sure that they fit her criteria.  Waffle maker?  "Only makes one thing and takes up far too much room," she said with a sigh.  Electric apple corer?  "I'll just have to go back doing things the old fashioned way," she lamented.  Rice cooker?  "Hey now!" she exclaimed, "A rice cooker may seem one dimensional, but this one actually has quite a few uses!" 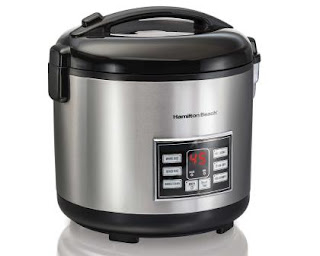 Brandy was talking about her recently acquired 4-20 Cup Rice and Hot Cereal Cooker from Hamilton Beach, which she had grown quite attached to as of late.  The sturdy, yet light weight appliance can not only cook all kinds of rice to fluffy perfection, but also a whole host of grains, from quinoa to farro, can steam vegetables, and best of all, can cook up oodles on hot cereal.  There is nothing Brandy likes more than a bowl of hot steaming oatmeal, grits, or cream of wheat in the morning, and because this particular machine has a "delayed start" function as well as an automatic warming function once its done cooking, she can actually prepare a lovely breakfast the night before and have it ready to go when she wakes.  The non stick interior of the rice cooker kept even the stickiest muesli off the sides, and the fact that the machine came with both a rice paddle and a steamer basket was simply the icing on the cake.  "In the cold Chicago winters, there is very little that brings me as much joy as some hot cereal," she's often been known to comment. 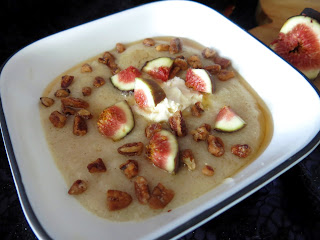 Just the thought of a delicious bowl of hot cereal  had Brandy drooling, even though it was 4:00 in the afternoon by this point and over 80 degrees outside.  Thinking of all the warm, earthy flavors fall has to offer, she conjured up images of spices, maple, cream, and delicious late season figs and decided to combine all of them into one decadent dish.

Because she loved her creation so much, Brandy's rice cooker survived the great Kitchen Purge of 2016, and she felt so strongly that everyone should have one of these that she has decided to give one away to one lucky reader!  All one has to do to win is to leave a comment down below, telling us what they would create using their very own Hamilton Beach Rice Cooker.  Bonus entries for everyone who follows Bunny and Brandy on Twitter, Facebook, and Instagram and leave a comment on the picture of Brandy's hot cereal creation.  A winner will be chosen at random on Wednesday September 21st.  After being notified, the winner will have 24 hours to send their mailing address to: bunnyandbrandy@gmail.com

If you aren't the lucky winner of the rice cooker but still want to pick one up for yourself, you can find them on Amazon and the Hamilton Beach website.

The writers of this blog were furnished with appliances by Hamilton Beach in exchange for an honest review. 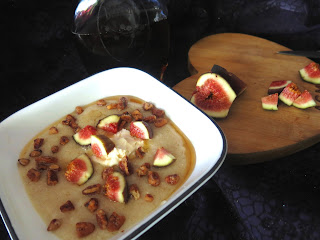 Add the farina, salt, and water to the cooker and set on "Hot Cereal" (alternatively, add the ingredients before going to bed and program the cooker to start the process in the morning).  After cooking, fluff the hot cereal with a fork and break up any clumps that may have formed.  Add in the brown sugar and cinnamon and stir until the sugar is dissolved and well combined.

In a small bowl, whip the mascarpone, maple syrup, and a tiny bit of salt with a fork until fluffy.

Spoon farina into bowls and top with a drizzle of maple syrup, a dollop of the whipped mascarpone, a few fig pieces, and some candied pecans, and serve immediately.