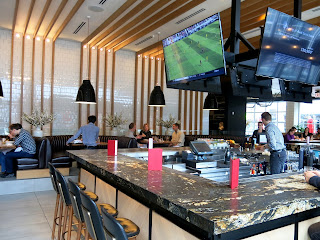 As you may know Brandy has slowly been making her way through the restaurants Bunny scouted for her back at the end of last year.  At first, she'd felt a little insulted that Bunny had gone on some culinary adventures without her, but then she began to see the benefits of having an advanced report.  "I never thought about it before, but there is something to be said for strategizing one's meal," Brandy reasoned as she went over Bunny's notes, "Understanding what I'm in for and what I should look for maximizes my eating time.  I suppose that's why people read these blog thingies in the first place." 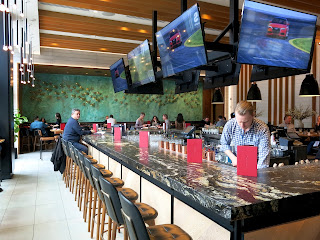 Picking from the array of restaurants Bunny had previewed, Brandy settled on Earls Kitchen and Bar as her next brunch location.  She liked the look of the eclectic menu and decor quite a bit, but it was the cocktail menu that was the clincher, so she decided to asked along Starr from Chicago Foodie Girl for a second opinion.

Much as Bunny had said, the inside of Earls was chic and whimsical with an eye towards celebrating Chicago's traditional of blues and jazz music.  Brandy especially loved the three dimensional mural at the back of the room that was made from trumpets.  The seating was open and varied with high tables, booths, low tables, and even an enclosed fire pit on the patio. 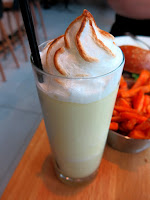 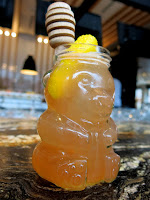 The first order of business was to decide which of Earls' whimsical drinks would be the beverage of choice for the morning.  Starr already had her sites set on the Bee's Knees, a fruity gin cocktail served in an adorable honey bear shaped jar.  Meanwhile, Brandy went with the Marilyn Monroe, which was flavored with passion fruit and vanilla vodka, which Brandy found to be a decadent and oh so sweet combination.  The second round consisted on two Lemon Meringue cocktails, which tasted and looked so much like their namesake dessert that they even came with a bruleed meringue top.  "Oh, now this is dangerous," Brandy commented after a single sip, "A drink this decadent and delicious should really come with several warning labels attached to it!"

As they were enjoying their drinks, a couple of complimentary cranberry muffins, warm from the oven, were delivered to the table, which Brandy very much liked.  "I do so love a little bread service at brunch," she said, "That little boost in carbs is perfect for powering one through the rest of the meal." 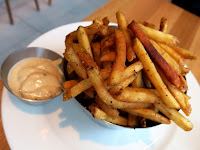 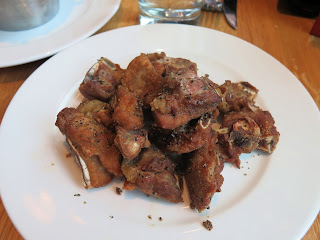 To balance out the mainly sweet drinks, Brandy and Starr chose Leroy's Crispy Ribs and and an order of Truffle Fries to start things off.  The fries were pretty standard, well spiced with salt and pepper, and nicely thin, but the truffle sauce on the side was the obvious focus.  The ribs actually did come with a warning, as the waitress explained that not everyone liked their unique preparation, but that those who did were fanatics for the dish.  Right away, it was obvious these were no ordinary ribs, more resembling something like pork rinds.  Each little piece contained about a bite full of tender meat with a crunchy deep fried exterior that had been coated in coarse salt and pepper for an extra punch of seasoning.  "I can see why these might be an acquired taste for some," Brandy mused, "And even I am not normally a fan of eating meat off the bone.  But I rather enjoy them.  Such a lovely little bar snack, perfect for munching on while watching a game." 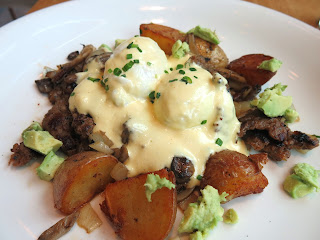 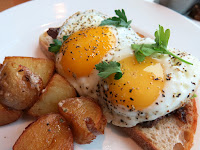 Breakfast proper then began with two dishes; the Steak and Eggs and the Sausage and Mushroom Hash.  The hash came with a generous amount of sausage, which did indeed pack just the right amount of spicy punch, but Brandy was a little disappointed that the mushrooms got lost in the mix.  Still, the dish was surprisingly light, especially with the addition of avocado, and the hollandais that covered it was absolutely buttery and delectable.  The Steak and Eggs, however, was a real show stopper.  "Steak and eggs is one of my favorite brunch dishes," Brandy told Starr, "And I can safely say this might be the most well thought out way I've ever had it."  The generous amount of skirt steak that came on the dish was certainly a bonus, but the real joy came from a sweet and smokey hit of bacon jam on top of some toasted sourdough and a bit of wilted spinach. 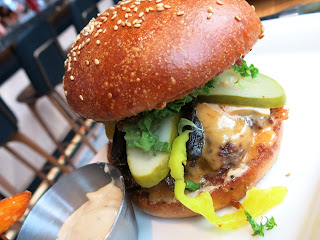 By that point, the ladies had been at Earls so long that they had completely bypassed brunch and had gone straight into lunch territory, so Starr suggested they check out one of the signature burgers, the Royale (with cheese, of course).  The burger came loaded with more bacon jam, plus beer infused cheese, crisp pickles, and caramelized onions on a soft brioche bun.  "I never suspected that a Canadian restaurant could so perfectly construct the ideal American burger!" Brandy exclaimed.  Even the sweet potato fries on the side were a delight, though Brandy was slightly disappointed that there was no poutine to be had on the menu.

Finally ending their day of indulgence, Brandy and Starr headed back out into the real world once more.  Bunny's preparation had certainly given them a fighting chance going in, but the extremely friendly and knowledgeable service was also a great help in the thick of things.  "I don't want to alarm you, Brandy, but I think we forgot to order dessert," Starr said as they were finally getting ready to leave.  "Oh goodness!" Brandy exclaimed, "And Bunny even made a point about the sticky toffee pudding!  That's it, sit back down and order another round of drinks.  We're staying here until dinner service starts." 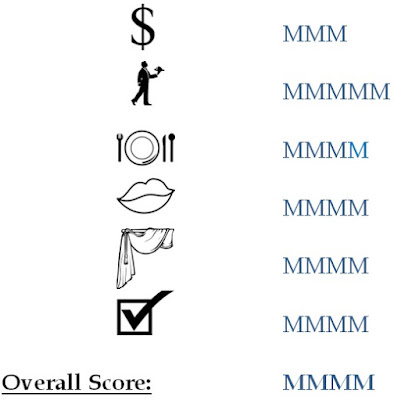