From the Kitchens of Bunny and Brandy: Honey BBQ Chicken and Corn Cakes 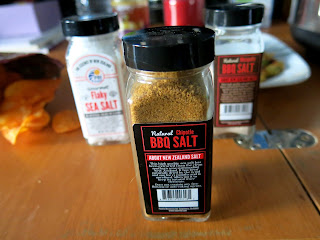 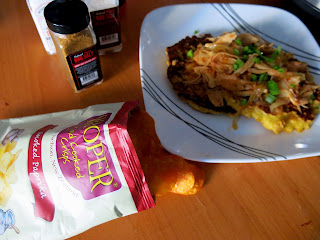 "What do we have here?" Brandy wondered as she bent down to picked up a box from her door step.  Brandy had been on a bit of an online shopping spree as of late and she had gotten rather used to random packages appearing, but this one wasn't quite what she had expected.  Was is perhaps the new knitting needles she'd ordered?  Or maybe the Make Your Own Fascinator kit?  Or the microbrewery starter pack?

Inside the package was an assortment of products from New Zealand that Brandy most definitely did not remember ordering.  There were potato chips, a jar of honey, some sea salted caramels, and three bottles of gourmet salts, all from Pacific Resources International, a US distributor bringing healthy and delicious treats from New Zealand to the Colonies for the first time. 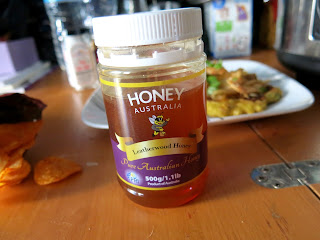 The bag of Smoked Paprika Proper Crisps were the first thing to capture Brandy's attention.  The kettle cooked chips had a delightful crunch and a flavor not often seen in the US.  Next she tried a spoonful of the Manuka Honey, which was actually purported to have some health benefits as well as being a lovely sweet treat.  Brandy immediately put some of the honey into her tea (she always has a cup of tea on hand) and then chewed on one of the sea salt caramels, which had also been made with the sweet stuff.  The seasoning bottles were all made with sea salt from the Pacific ocean and obtained not by traditional refining processes, but by solar evaporation for an untainted flavor.  While sipped her honey flavored tea and chewing her honey flavored caramel, Brandy studied a bottle of mesquite BBQ seasoning when inspiration struck and she immediately rushed off to the kitchen to start cooking with this amusing array of ingredients.


The writers of this blog were sent complimentary products in order to facilitate the writing of this post. 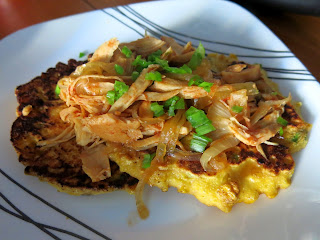 Slice the onion and lay the pieces down in the bottom of a slow cooker.  Coat the chicken breast in BBQ salt and lay on top of the onions.  In a small bowl, mix together the honey, ketchup, Worcestershire, and hot sauce (if using), then pour the mixture over the chicken.  Set the slow cooker to high for 4-6 hours, depending on the thickness of your chicken breast.

Once the chicken is done cooking, shred the meat with a fork.  To serve, place corn cakes on a plate and top with chicken meat and onions, then sprinkle on fresh green onions.  Serves 6-8
Posted by Bunny and Brandy at 6:29 AM