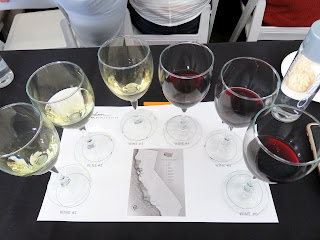 This past weekend saw the premier of the Chicago Food and Wine Festival, the latest notch in the belt of the USA's most popular foodie city.  As with all things involving being able to drink before noon, Brandy knew she simply had to check things out, so she went along on Sunday (which proved to be quite a smart decision, as Saturday's events were slightly dampened by rain) to enjoy a bit of hob-nobbing, food, and frivolity. 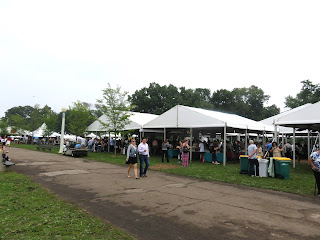 Compared to Chicago Gourmet, Food and Wine was much more relaxed and much less crowded.  There wasn't a time during the entire afternoon that Brandy waited in a line for more than 30 seconds, which meant she was able to quickly get the lay of the land and then circle back for another helping of some of her favorites.  The smaller size didn't impede the talent from coming, however, as Sunday alone showcased demos from Art Smith, Jonathan Waxman, Graham Elliot, and others, while local celeb chefs like Stephanie Izard, Sarah Jayne Grueneberg, and Giuseppe Tentori actually served food to the masses themselves at their respective restaurant's tents. 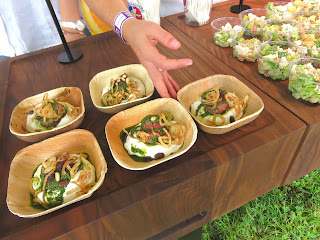 In fact, Brandy's first stop of the day was the Chobani Yogurt tent, where Stefani Izard was featuring a huge variety of dishes using the aforementioned yogurt, including the dish she had brought from Girl and the Goat, a butterscotch bundito with blueberry coulis.  The bundito (a pudding like dessert with the firmness of a flan) along with some lamb meatballs with crispy shallots were Brandy's two favorite bites in the tent, though the simple salad with yogurt feta was a close second. 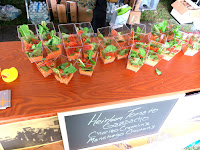 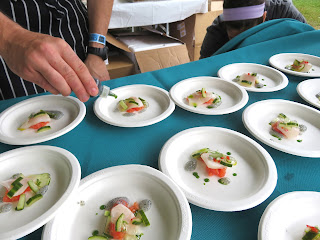 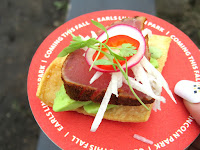 At the Grand Tasting, Brandy zeroed in on a few favorites quite quickly.  Also coming from Izard's camp, Little Goat's pastry chef brought a delicious PB&J Sundae with peanut butter gelato and grape flavored Pâtes de fruits that was so good that Brandy managed to sneak three of them.  Stephen Wambach from the Four Seasons Hotel definitively won for best presentation of the day with his simple, fresh, and gorgeous ceviche with cucumber.  Seafood seemed to be a big theme of the day with the team from GT Fish and Oyster impressing with a spicy shrimp bruschetta with avocado and pistachio, the up coming Earl's Kitchen serving a well put together Tune Tostada, and Jimmy Bannos Jr. presenting a Shrimp Cracker with micro greens.  Gazpacho was another popular item of the day, with Rockit serving a creamy Heirloom Tomato gazpacho with manchego croutons, TÊTE Charcuterie
accessorizing their version with pepperoni spiced mortadella, and Country BBQ making a smoked gazpacho with bacon crumbles.  Setting himself apart with his pseudo-gazpacho was Jared Wentworth, of Dusek's and Longman & Eagle, who presented the chilled soup with a spoonful of ingredients, that when consumed all at the same time, brought forth all the flavors of a Sicilian pizza.  Another creative set of dishes came, unsurprisingly, from the guys at Moto, who not only brought along a pork belly dish, but also some watermelon pops and a bite sized version of their famous Breakfast Radish course. 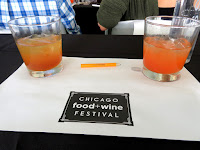 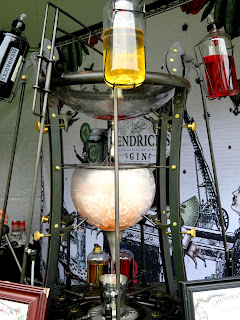 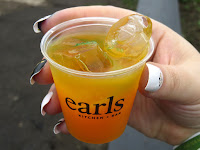 Moving on to drinks, Brandy was enchanted with the Hendrick's Gin tent, which served up a duo of cocktails poured from an intricate contraption.  Brandy preferred their Unique Negroni, which had a nice herbal orange flavor.  Earl's Kitchen again impressed with their Silly Wabbit, a cocktail based around carrot juice that had Brandy already dreaming of enjoying their brunch menu once the restaurant opens their doors later this fall.  The best cocktail of the day was the Jubilee, which was served during a demo with Violet Hour's Eden Laurin, where she gave attendees not only a little lesson in cocktail history and development, but also tips on curing hangovers.  The thing that made the Jubilee special was the addition of the first in a line of products from The Violet Hour, their special "cocktail syrup," made with burnt sugar, spices, and vanilla.  Brandy then headed to a rather enlightening tasting with Kendall Jackson Wineries, in which participants had to guess which wines were most expensive, mass produced, and which processes the grapes had been put to. 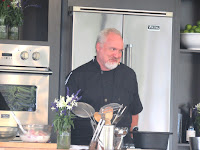 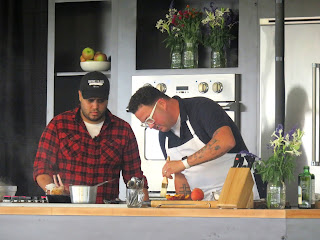 After filling up in the first round (and nearly toppling over after a few drinks) Brandy partook in some of the demos and seminars.  Art Smith enchanted the crowd with his Southern charm, teaching them how to make healthy substitutions in every day recipes.  Jonathan Waxman exhibited his trademark cool while whipping up an impressive array of seafood dishes.  Graham Elliot did his best to stay on course while fielding questions about just how good those kids of Master Chef Jr. really are (answer: really really good). 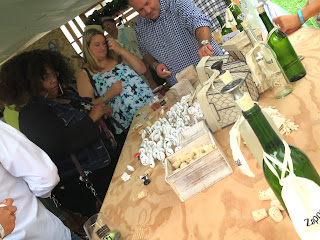 Even more entertainments than the just the food and drinks were close at hand from companies like Zappos, which hosted one of the most popular tents of the day, in which festival goers could make their own wine charms, wine stoppers, customize a glass of sangria, and even go clothing and shoe shopping.  Citi Bank had a table of cheeses and meats to nibble on while they handed out goodies like wine tumblers and sunglasses for those willing to participate in a variety of social media challenges.  Speaking of challenges, Renaissance Hotels hosted blindfolded tasting sessions, asking participants to try a variety of vegetables and identify them for a chance to win a weekend's stay at one of their locations. 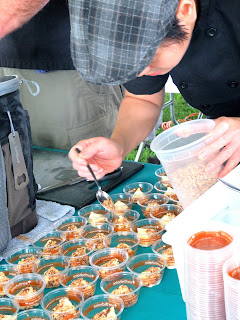 All in all, Brandy was rather delighted with the laid back, but vibrant atmosphere at the first ever Chicago Food and Wine Festival.  "I do so enjoy that everything wasn't necessarily set up with a structured flow in mind so that one was encouraged to wander freely and explore in different ways," Brandy mused afterwards, "And I love the close contact with the actual chefs, who all seemed genuinely interested in what the festival goers thought of their food.  That is certainly not an experience you get every day!"

Make sure to check out the Bunny and Brandy Facebook page for more pictures of the festival!

The writers of this blog were given passes to this event as members of the media in order to facilitate the writing of this post.
Posted by Bunny and Brandy at 10:34 AM