mEAT or Brunch on a Stick 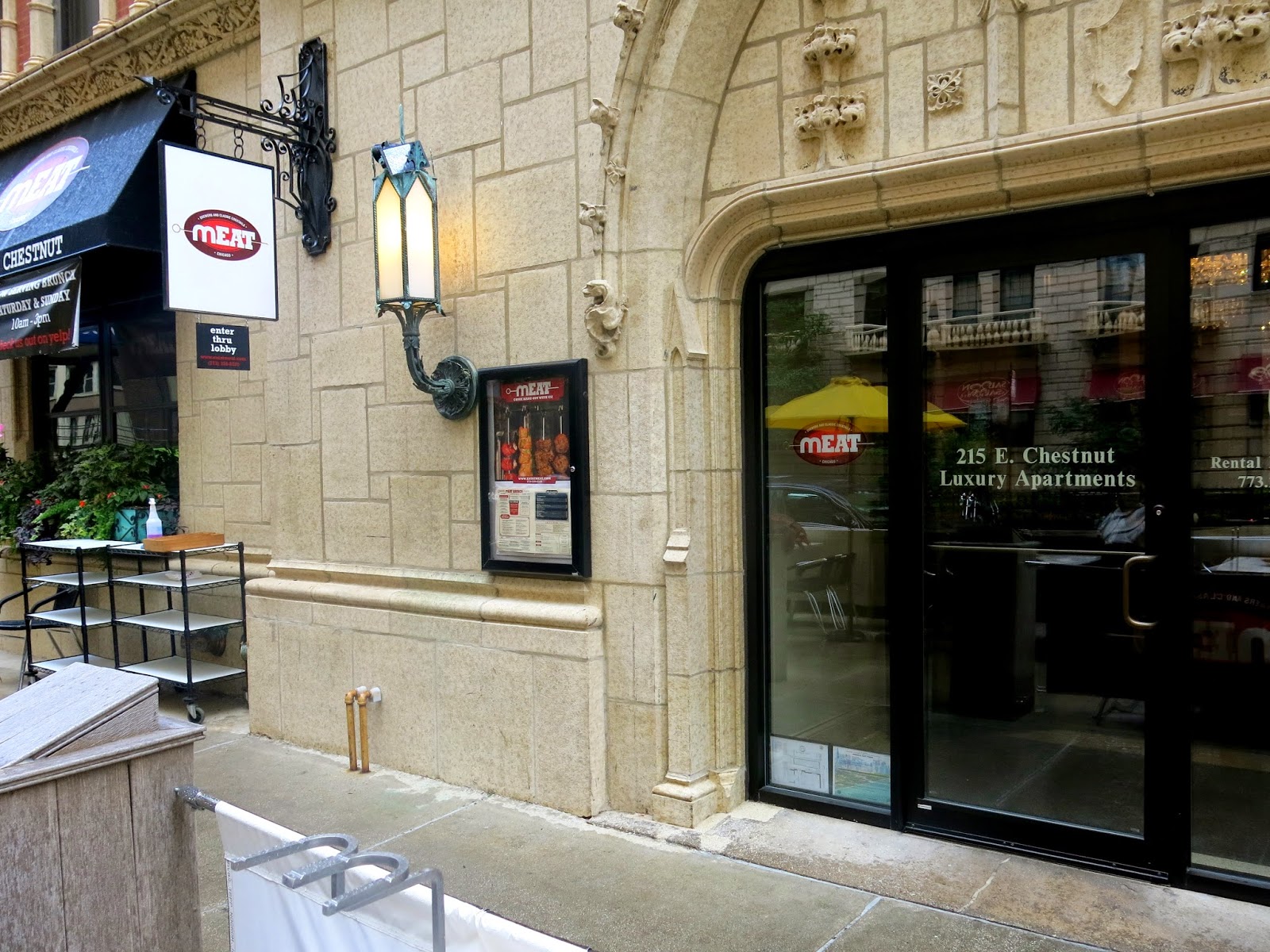 Usually, when someone says, "I want to make a movie about you," most people would approach the prospect with a certain amount of skepticism, but when Brandy recently heard these very words while attending a screening at the Chicago Film Festival, she was intrigued.  The person saying this to her was a woman by the name of Boxty Ban, an up and coming avant garde director who had gotten into a conversation with Brandy while they were both waiting for the movie to begin and became fascinated by Brandy's tales of her brunching adventures.  "Of course you do, dear," was Brandy's response to this impromptu confession, "Unfortunately, due to my youthful naivety, I am technically still under contract to RKO, so I cannot appear on screen for anyone else."  "My dear lady, RKO has been defunct for quite some time now," said Boxty, tilting down her dark sunglasses and flipping aside a stray lock of hair from her fashionably asymmetrical haircut, "I'm sure that contract is null and void."  "Possibly," Brandy pondered, "But I did make a promise to Howard Hughes, and by God, I don't need his ghost haunting me, so I'm afraid it's simply not possible."  "What if I don't show your face camera?" suggested Boxty.  "A movie where you don't show anyone's face?" Brandy pondered, "I suppose that would put the emphasis on the food, which I can appreciate...Alright, I'll do it!" 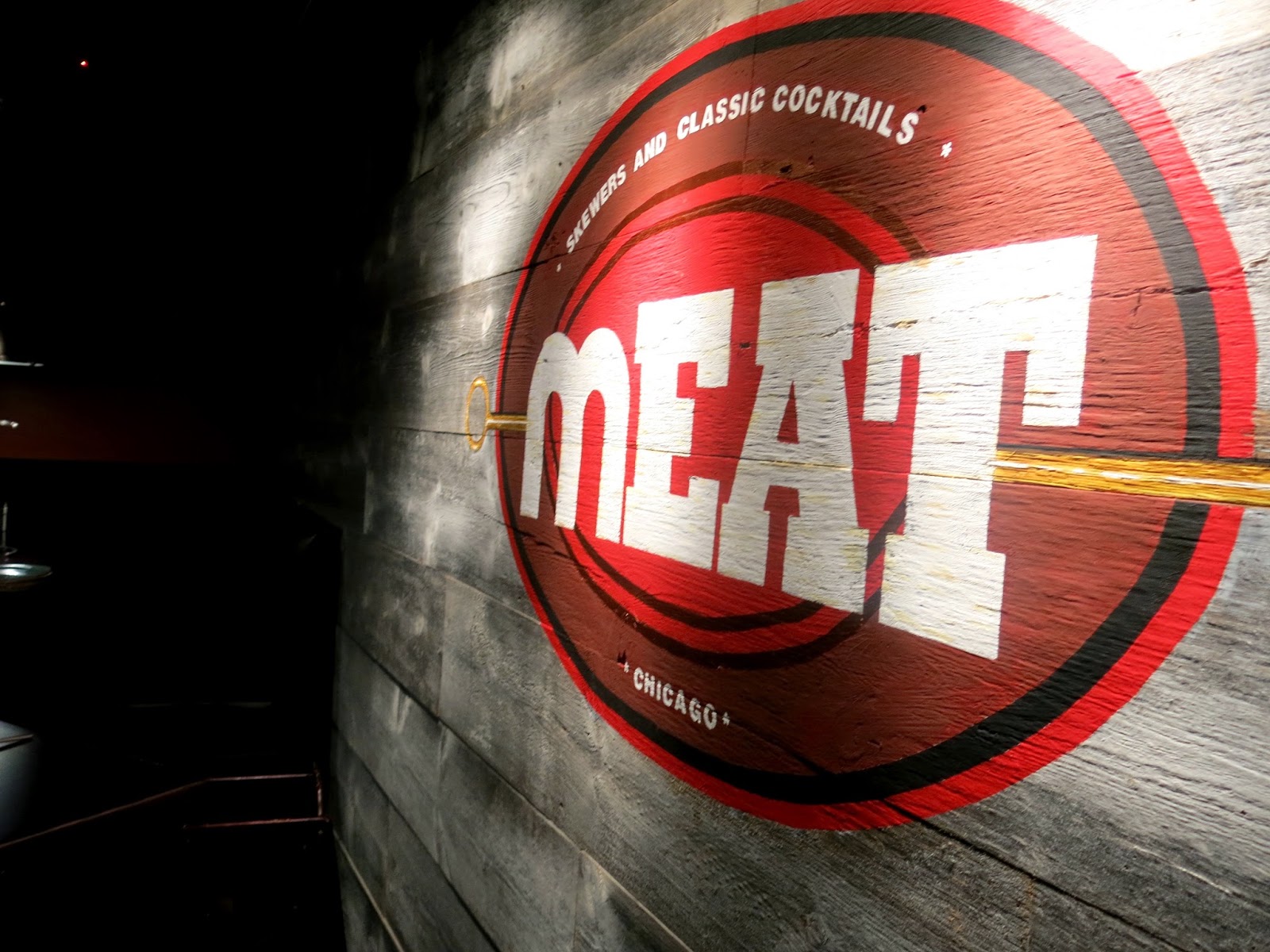 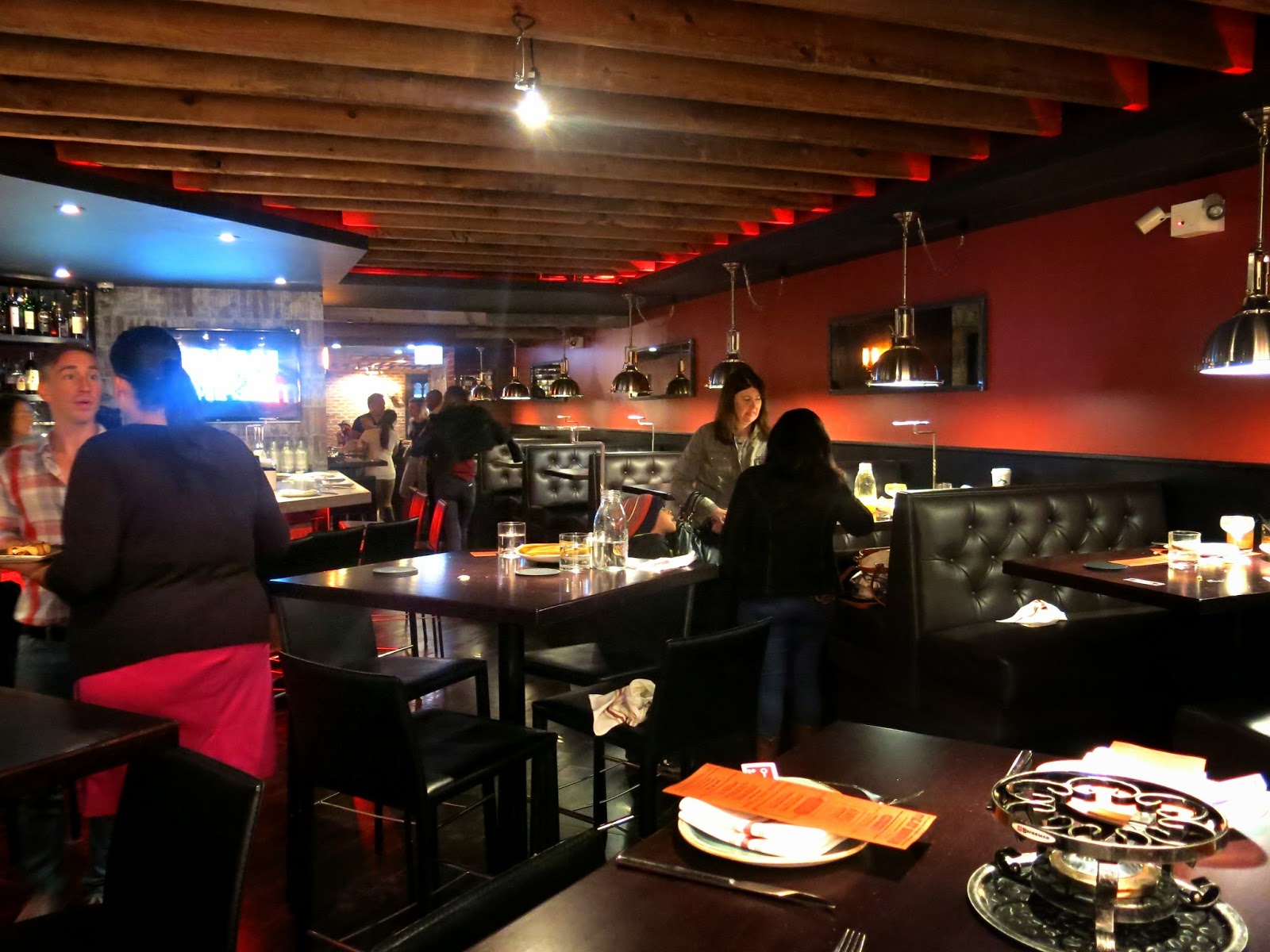 Before Boxty could begin filming her vision of a brunch feature film, she asked Brandy to take her out to one of her typical brunches, so Boxty could get an idea of what eating with Brandy would be like.  Brandy chose to take her to mEAT in Streeterville, thinking the fashionable neighborhood, exciting presentations of the food, and the unusual concept of the restaurant (it concentrates on communal and interactive dishes like fondue, meat skewers, and shared side dishes) would appeal to Boxty's artistic temperament.  Though a little off the beaten path, mEAT's Streeterville location was a fairly dimly lit, atmospheric tavern like space with elevated booths and high tables.  Though Brandy felt the lighting was a little on the dark side for brunch, especially as the back part of the space didn't even have any windows for natural illumination, she did like the cozy feeling it created. 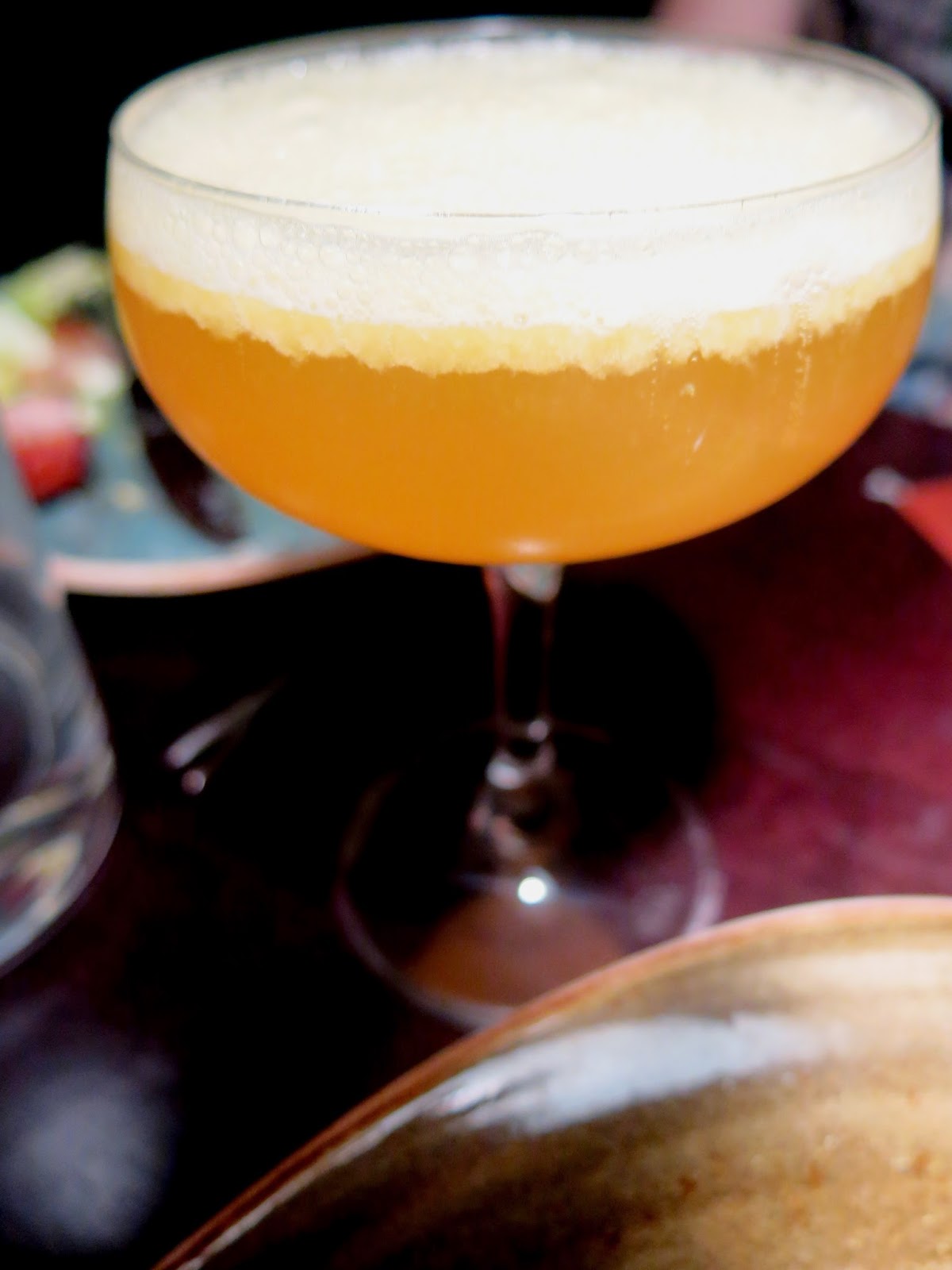 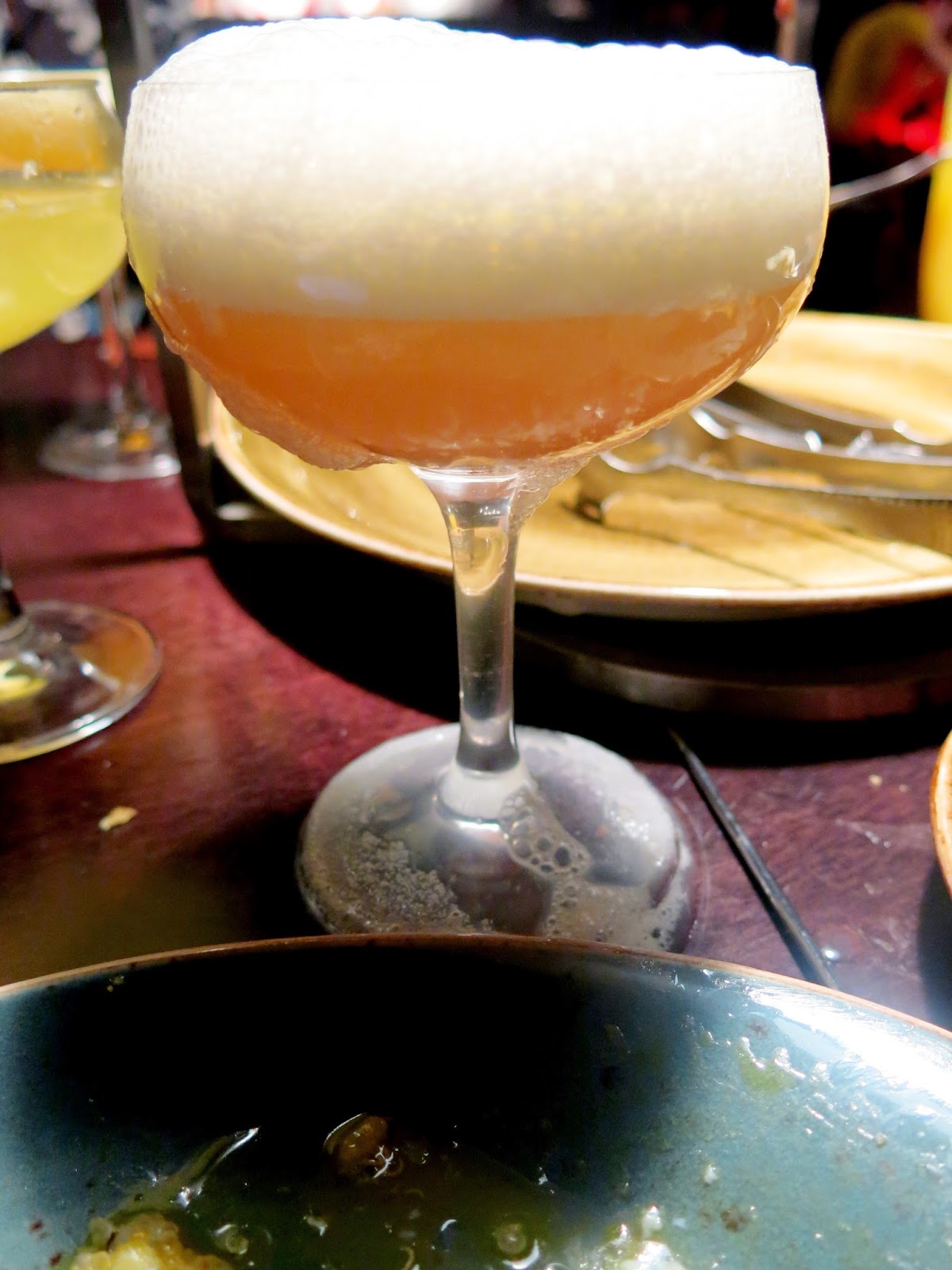 The meal began with a choice of brunch cocktail classics: bloody marys and mimosas.  Both were done well, if fairly traditional, but Brandy noticed that the menu featured some more elaborate versions of the drinks and she simply couldn't help but ask about them.  One of the kindly managers obliged her curiosity by bringing over one of the Orange Sherbet Mimosas and a Peach Sherbet Bellini, both of which were rather delightful in their presentations and constructions, being prepared with melted sherbet in place of the juices and topped with fizzy citrus foams.  "I like that they're thinking about the cocktail in a different way here," said Boxty Ban, studying the glasses carefully, "I've always felt that you are what you eat, so if you're eating creatively, you're thinking creatively."  "I find I think creatively while consuming any alcohol in general," Brandy replied. 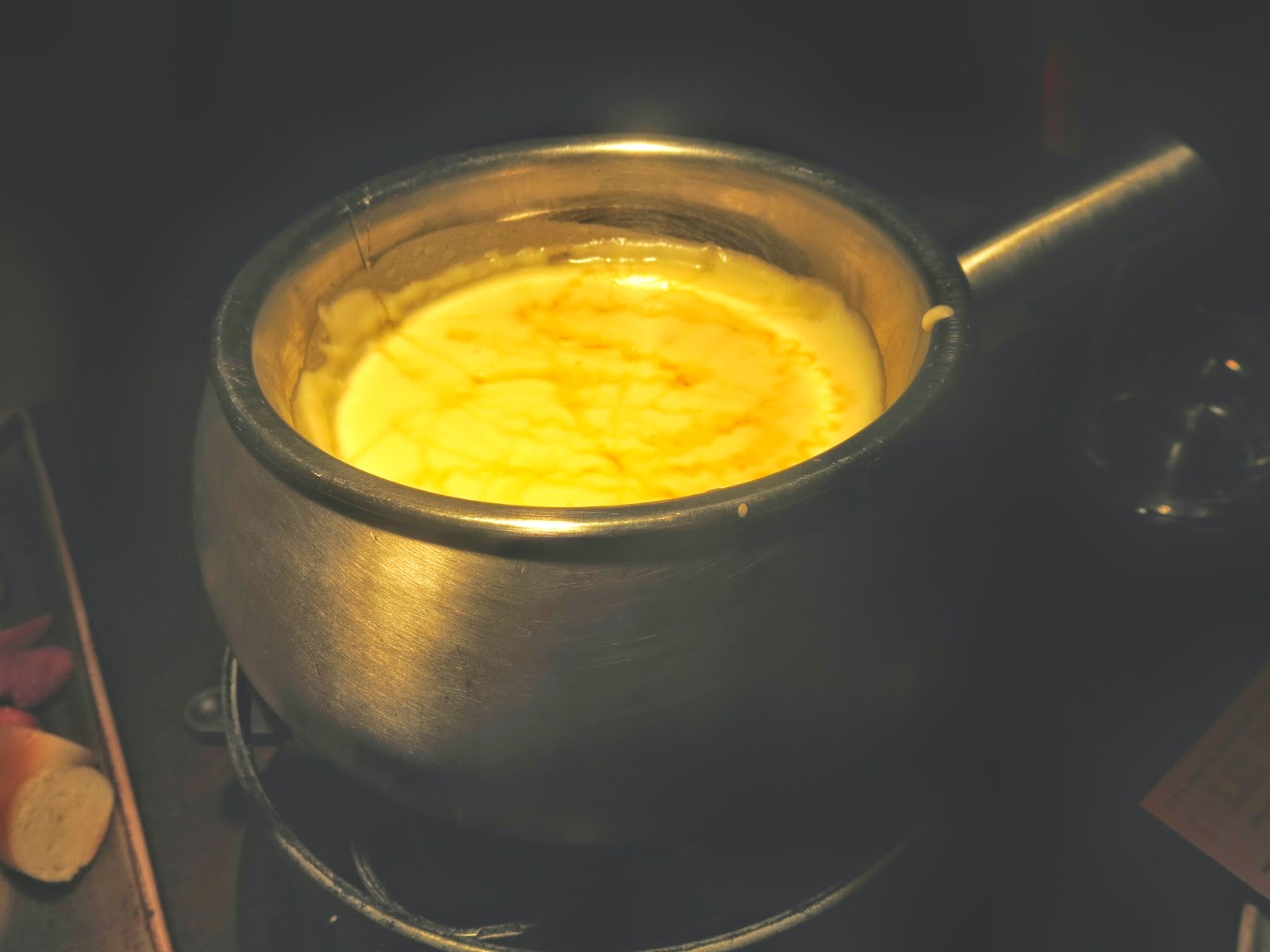 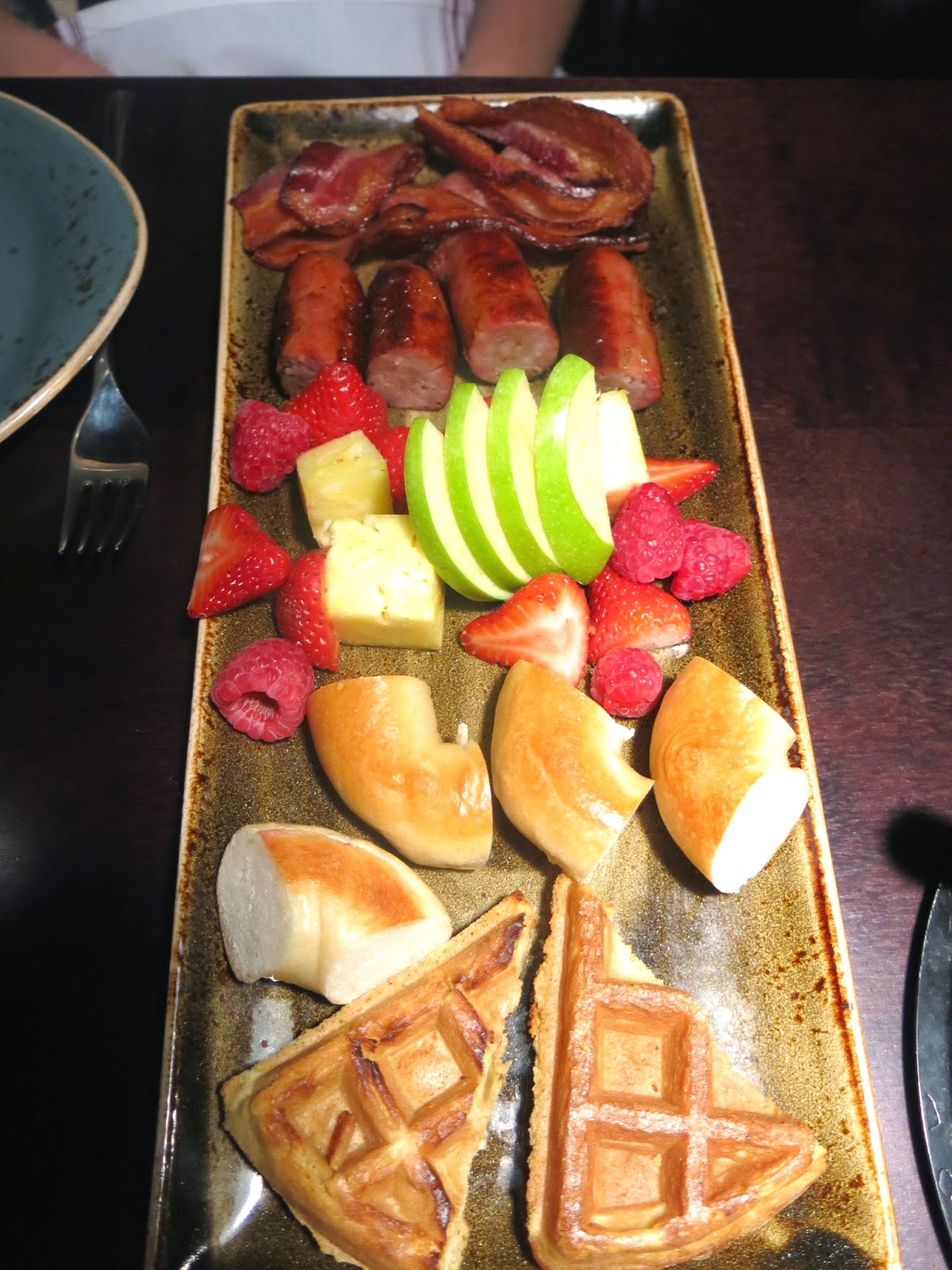 The first course was decidedly decedent, as the two brunch companions were presented with the Breakfast Fondu, which included a pot of luscious melty cheese sauce and a platter of various goodies to dip into it.  The cheese itself had a surprising sweetness to it, as it consisted of not only fontina and gruyere, but also white wine and honey, both of with made it a great match for almost all of the dippers (while Brandy loved dipping the pieces of sausage, bacon, waffle, and bagels into the mixture, wasn't entirely convinced about dipping things like pineapple and strawberry into the cheese, but Boxty very much liked dipping the green apple slices). 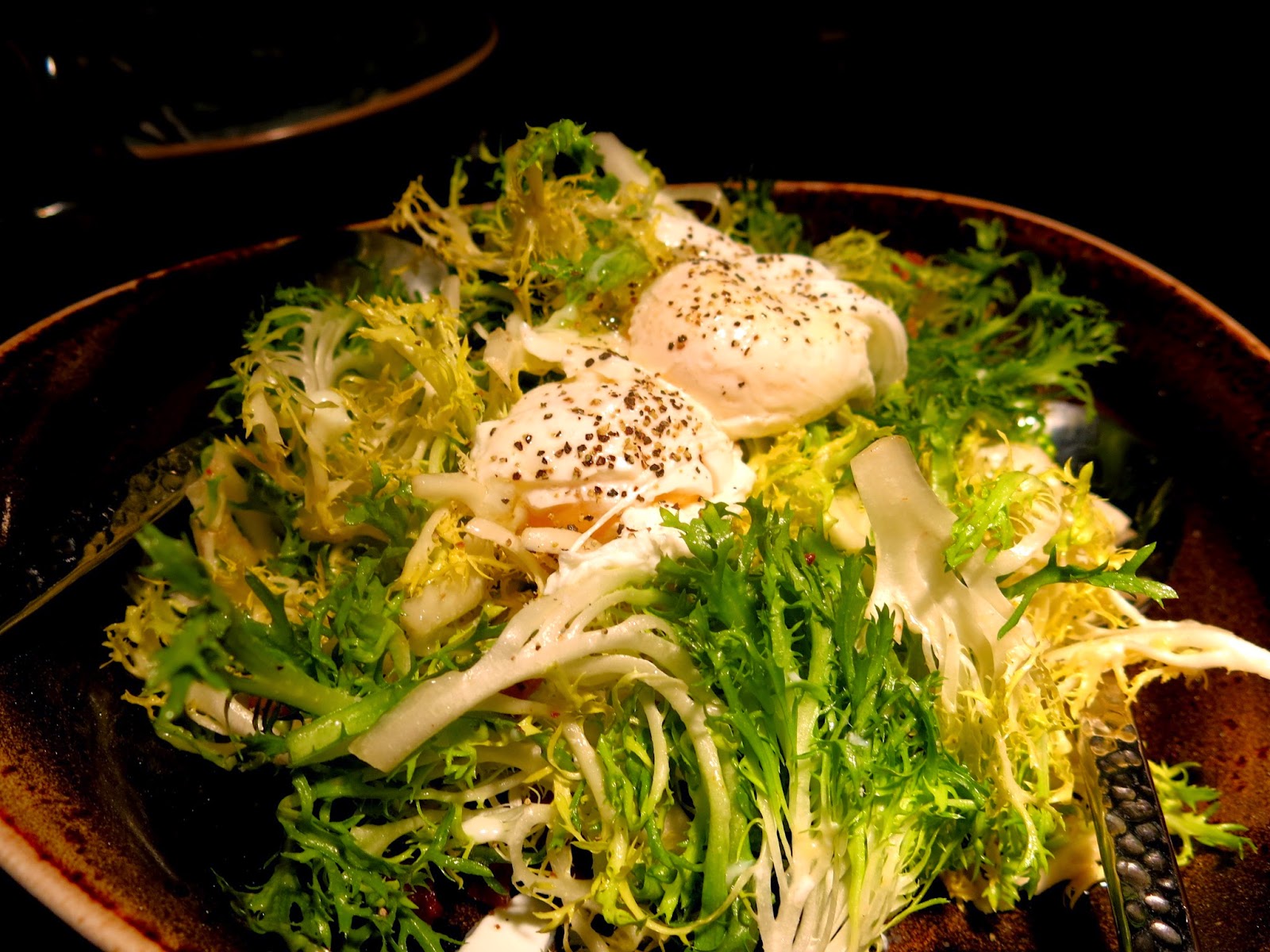 Next was the Bacon and Egg Salad, which consisted of a bed of frisee topped with bacon lardons, an extremely soft poached egg, and a tangy dressing of shallots, mustard, and more bacon.  Always appreciative of sweet and savory combinations in her brunch dishes, Brandy was particularly fond of the vinaigrette that dressed the salad, while Boxty marveled at the nice combination of textures from the chewy bacon, the silky egg, and the frilly greens. 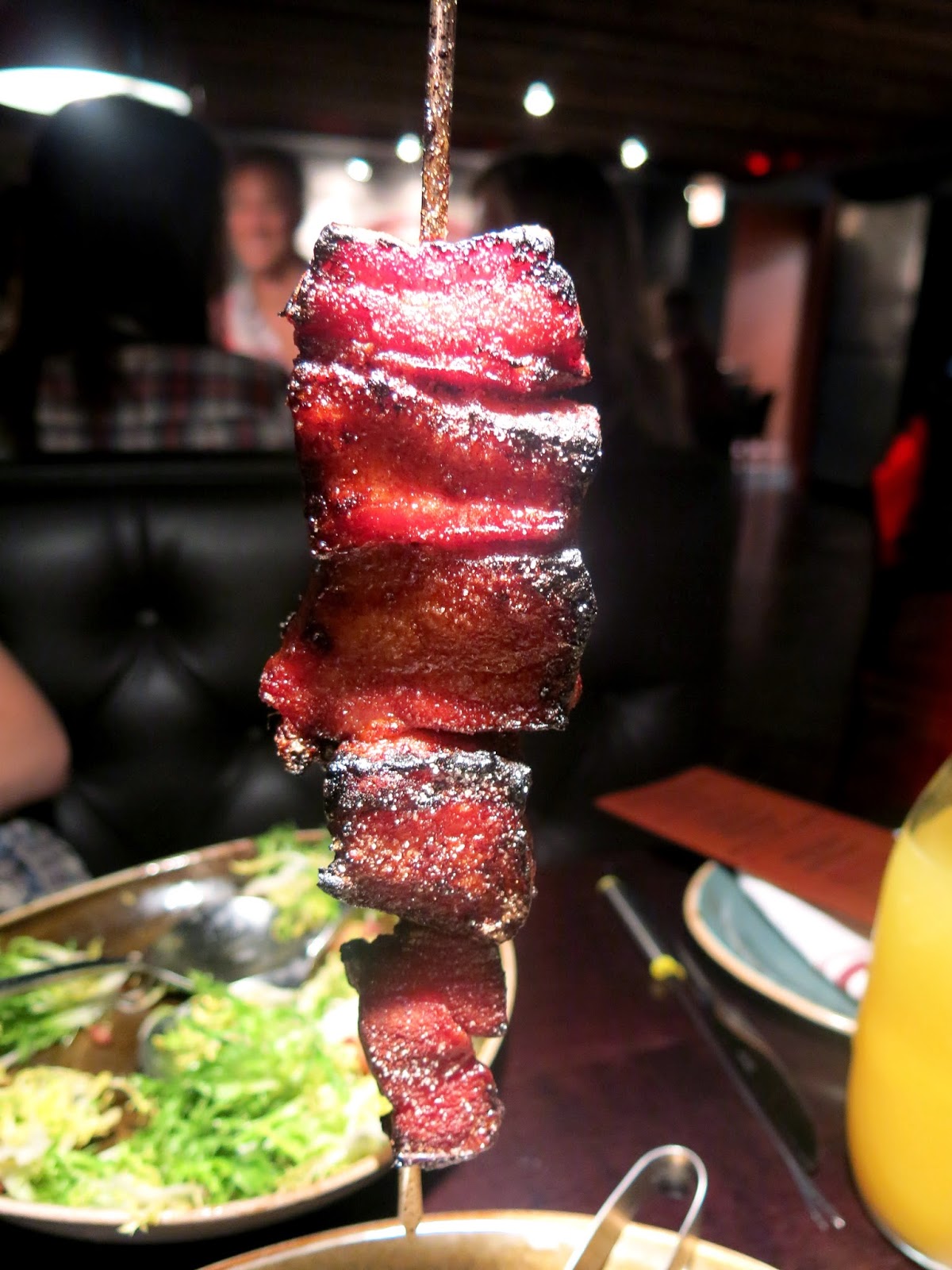 One of the main features of the mEAT menu is unsurprisingly the meaty skewers, and for this particular meal, Brandy and Boxty were treated to the Cinnamon Glazed Bacon Skewer, which was hung on a special stand at their table, so as to show off all of the glossy, bacony goodness.  The large chunks of meat were easy to slide off the skewer with the use of some tongs and had nicely crisp edges to them.  They weren't overwhelmingly sweet, but the cinnamon kick was definitely there. 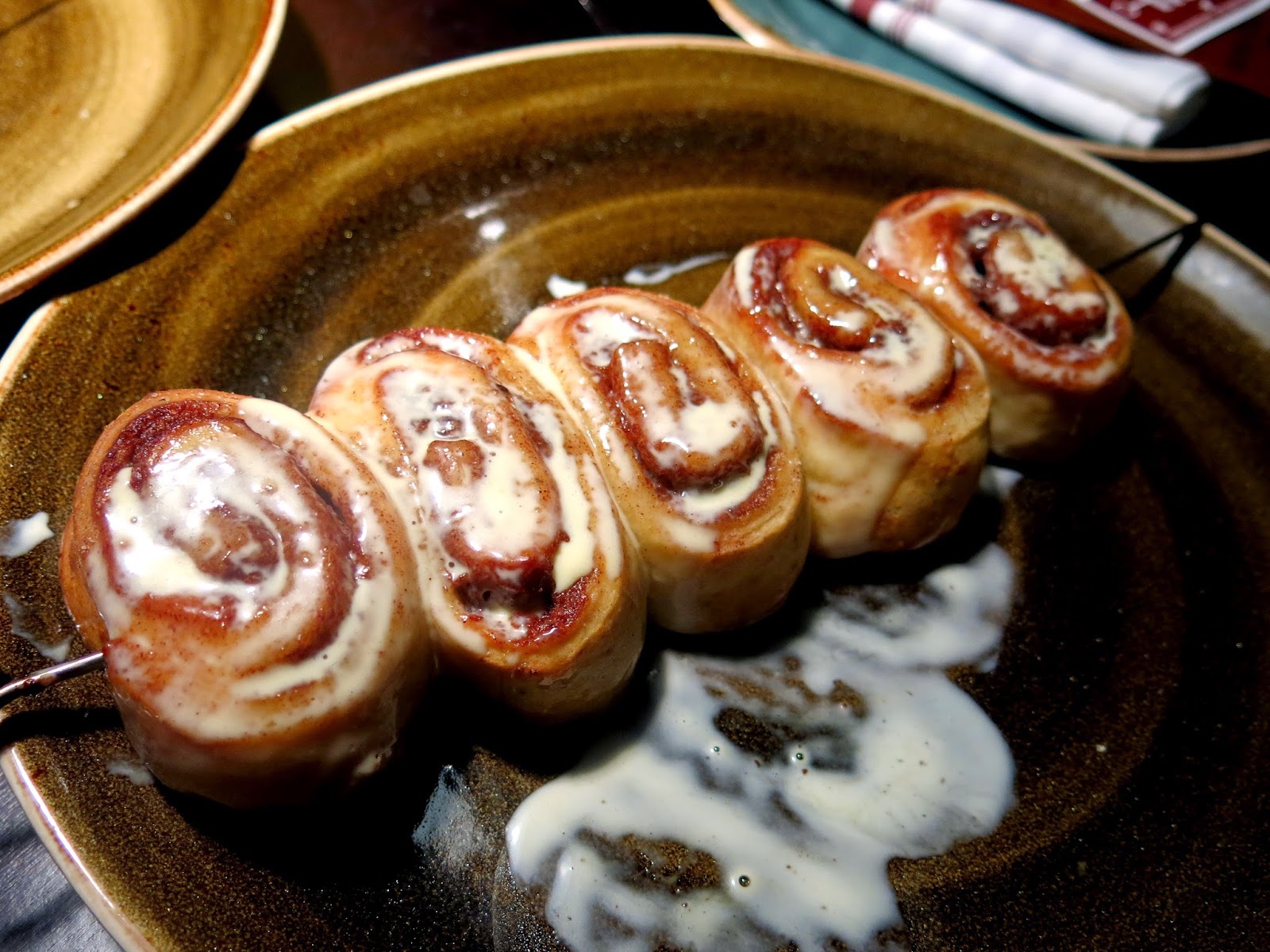 A second skewer they sampled was the Cinnamon Roll Skewer, which sadly could not be hung like the bacon one, as the kitchen had yet to devise a way to keep the pastries from sliding off.  The rolls had a nice sweet icing to compliment their spicy interior swirl.  "These are the perfect size," Brandy raved, "Sometimes restaurants will give you humongous cinnamon rolls, and even though they might be tasty, they're just too bloody big to finish.  These are a couple of bites a best.  Brilliant." 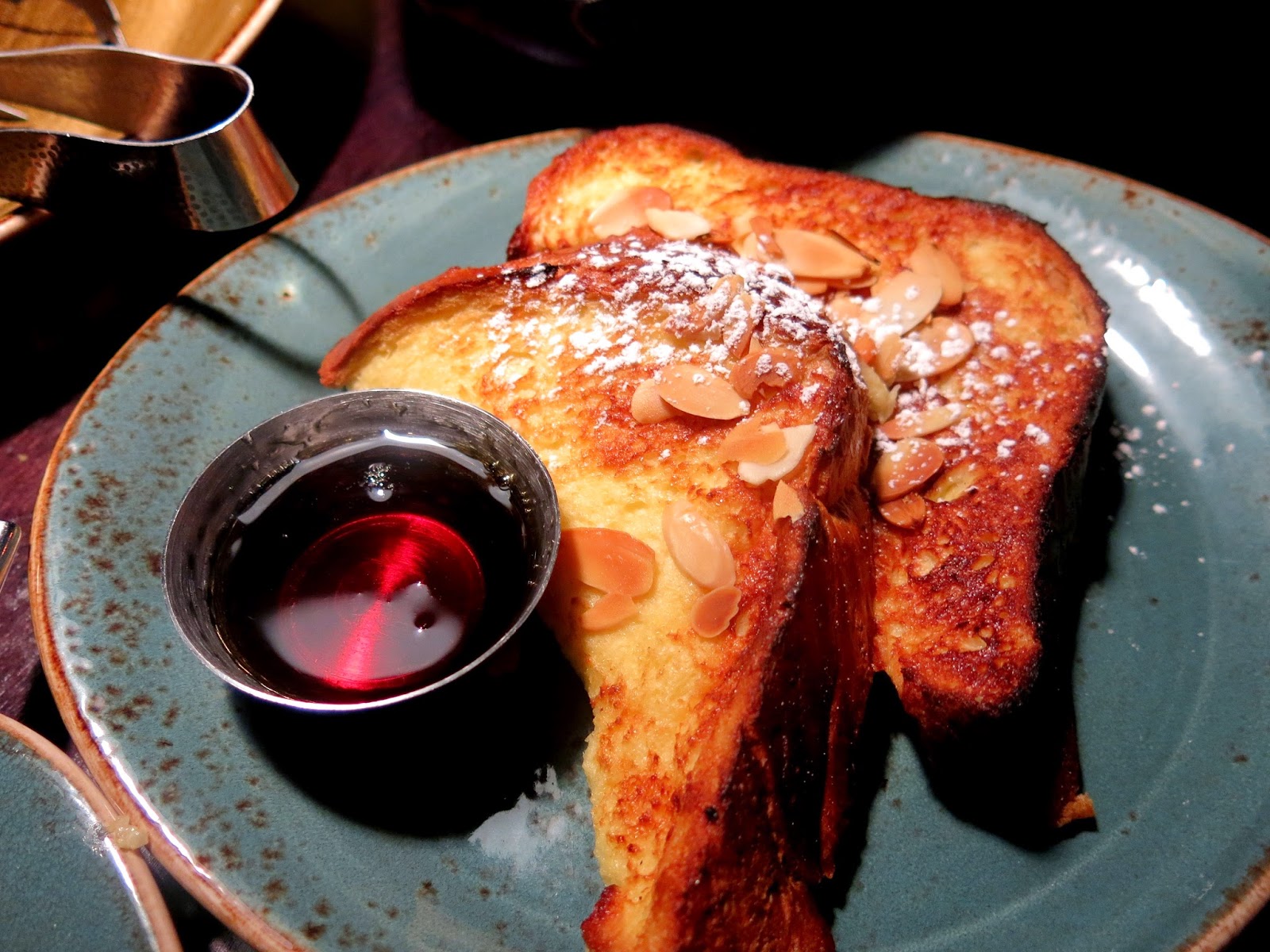 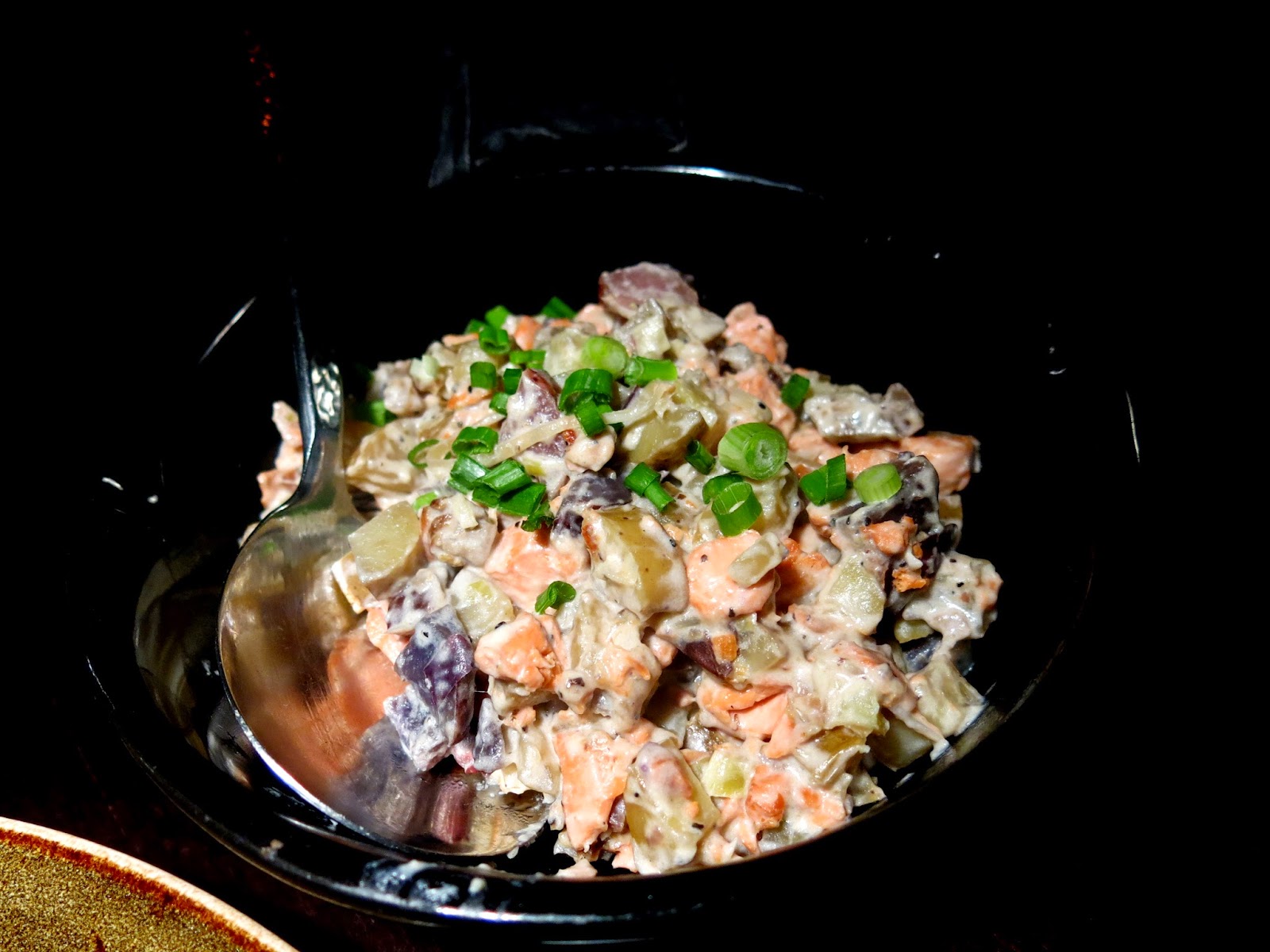 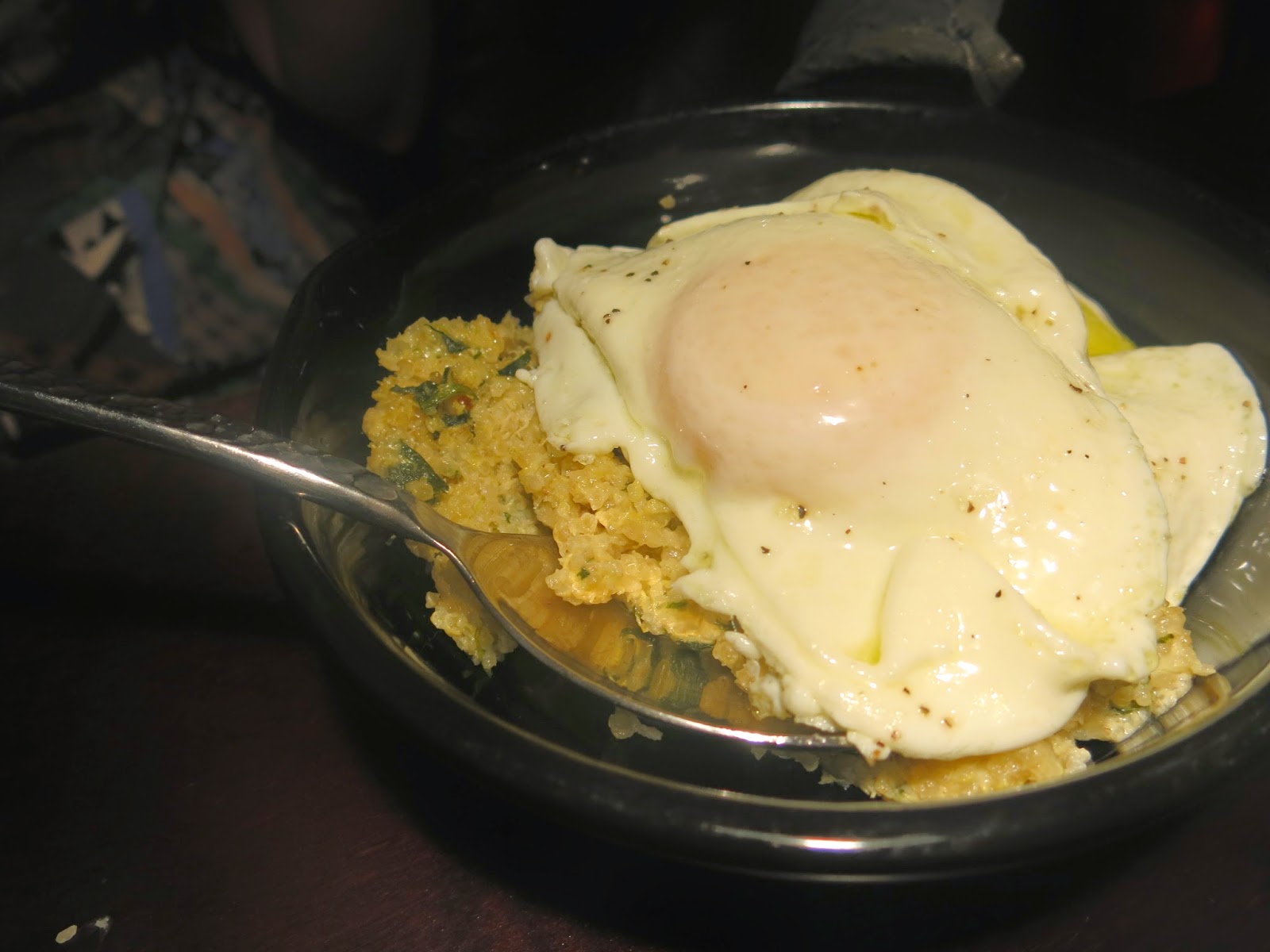 Three different "sides" were then brought to the table, though both Boxty and Brandy agreed that these could have easily been entrees on their own.  The first was the Salmon Hash, with was a skillet with some flaked fish, potatoes, and leeks in a creamy sauce.  While Brandy liked the flavor of this one, she found herself wishing for a bit of a crunch to break up the similar texture of the tender salmon and the potatoes.  The second side was the Almond French Toast, which was a pretty standard dish but with a nice bit of nuttiness from the sliced almonds on top.  Lastly was the Quinoa with Baked Eggs, which both Brandy and Boxty felt was one of the standouts from the morning.  "It reminds me of the polenta I used to eat every morning during my shoot in Spain," Boxty said, "Rich, but not overly aggressive."  Brandy agreed with her sentiment, but added that she felt that once the egg yolk had been broken and mixed in with the quinoa and veggies that the dish pushed into a more decedent category.

There was something for every budget at mEAT (most of the dishes, including the bigger plates, sides, and skewers came in well under $15), which Boxty very much appreciated, as she was so inspired by her brunch with Brandy that she immediately began budgeting for her brunch feature film.  "I'm going to call it, 'The Rise and Fall of Sweet and Savory,'" Boxty said, making a gesture as if to showcase the title on an invisible marquee.  "I'd go see that," Brandy smiled to herself (she'd had several mimosas at this point), "But can we get Olivier and Gielgud to play Sweet and Savory?" 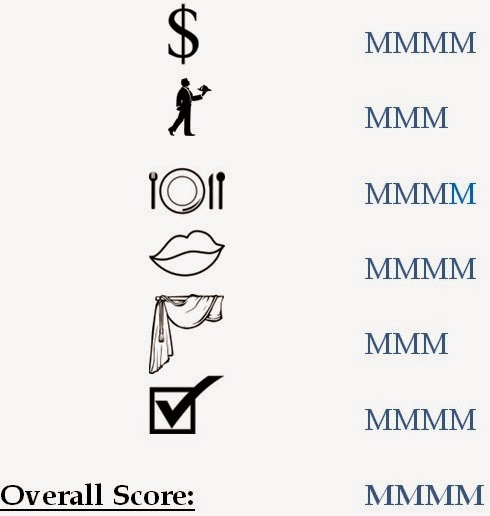