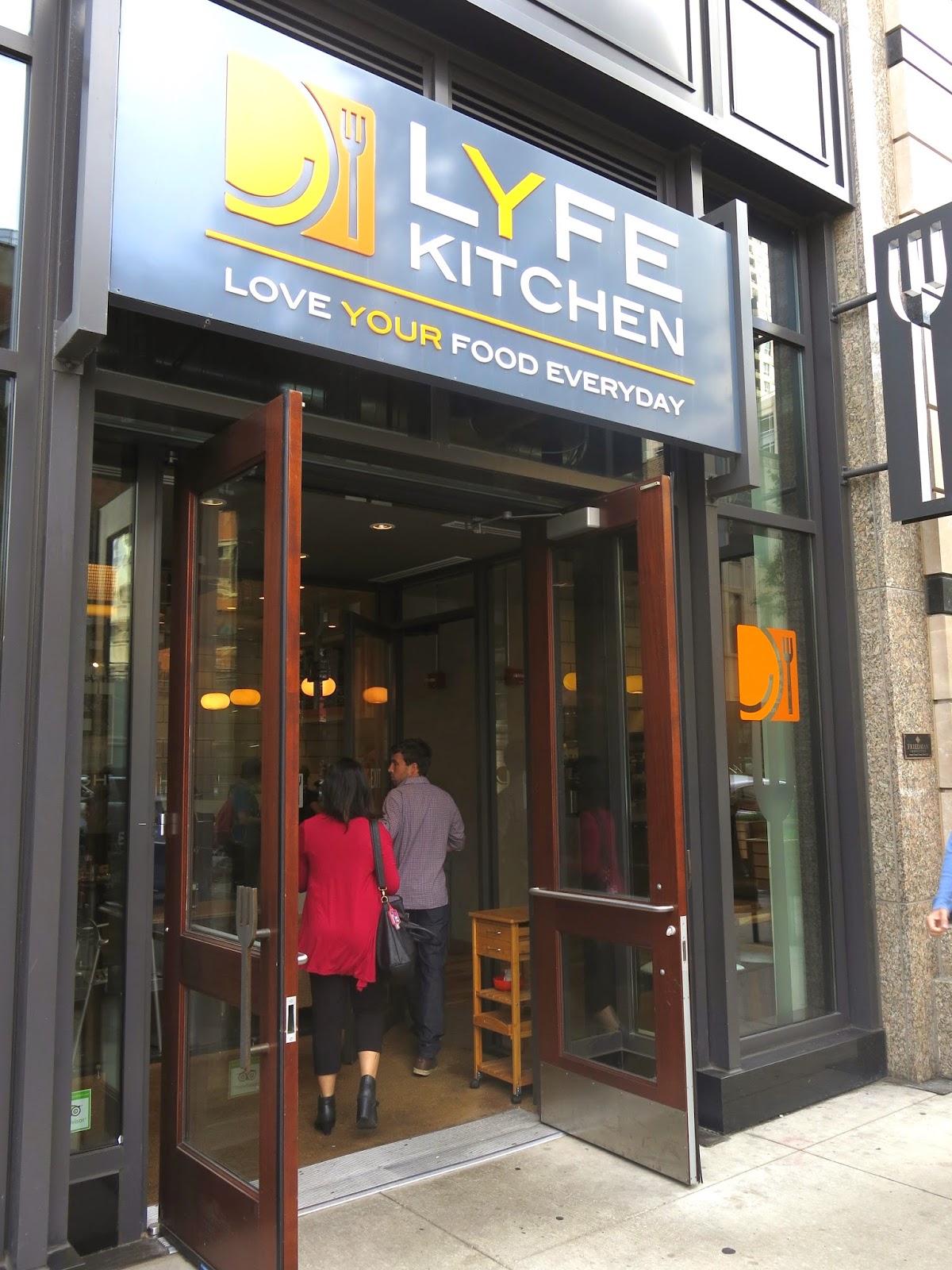 Goodness knows that healthfulness is normally not one of Brandy's concerns when brunching.  "At my age, the only reason I would care about an excess of butter is if it was one someone else's plate and not mine," as Brandy likes to point out.  But when her dear friend Brocco Leigh Binto (genius inventor and scientist) came to her with a little conundrum, she couldn't help but be intrigued.  "I'm wondering if you could help me with a top secret experiment," Brocco began, "I can't explain the parameters in too much detail because it might effect the outcome, but suffice it to say it involves taking you out to brunch."  "I do like the sound of that," Brandy mused.  "The only catch is that we'll need to go somewhere with healthy food."  "Normally I'd sock you one for even suggesting health food, but there is somewhere I'd like to try."

Brandy met Brocco on a Saturday morning, taking him to Lyfe Kitchen in River North.  Brandy had been interested in trying Lyfe Kitchen for quite a while, as word of this new kind of fast casual dining had reached her through the pipelines.  Though not usually one to seek out healthier food options, Brandy very much liked the intentions behind Lyfe Kitchen (a franchise founded by former fast food executives with locations in California, Colorado, and other parts of Chicago) of using technology instead of cheaper ingredients and chemicals to to bring fresh and delicious locally sourced dishes to the masses.  A face and name familiar to Chicago's food scene, Chef Art Smith, even hopped on board to help create the menus and mentor the culinary team. 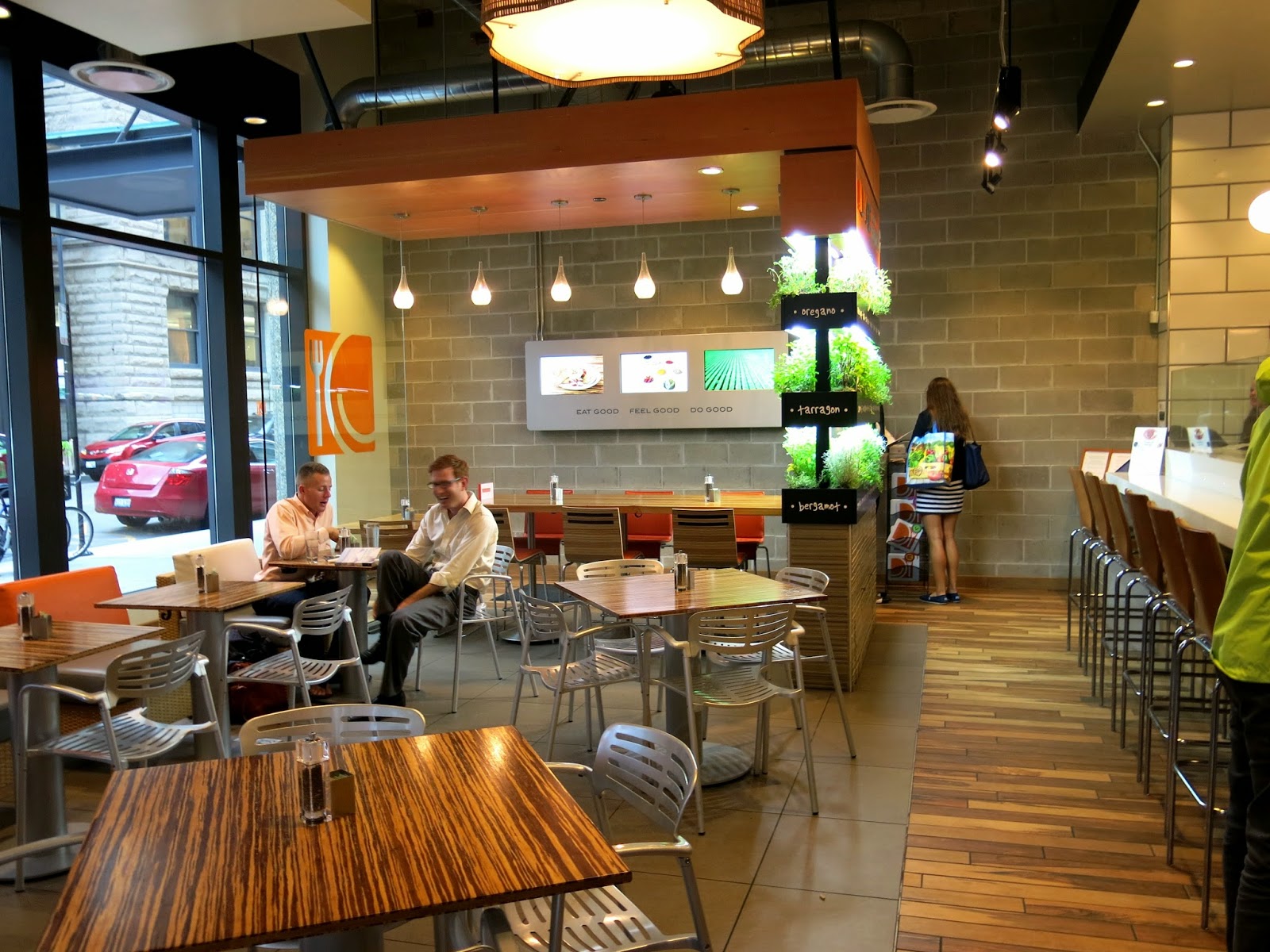 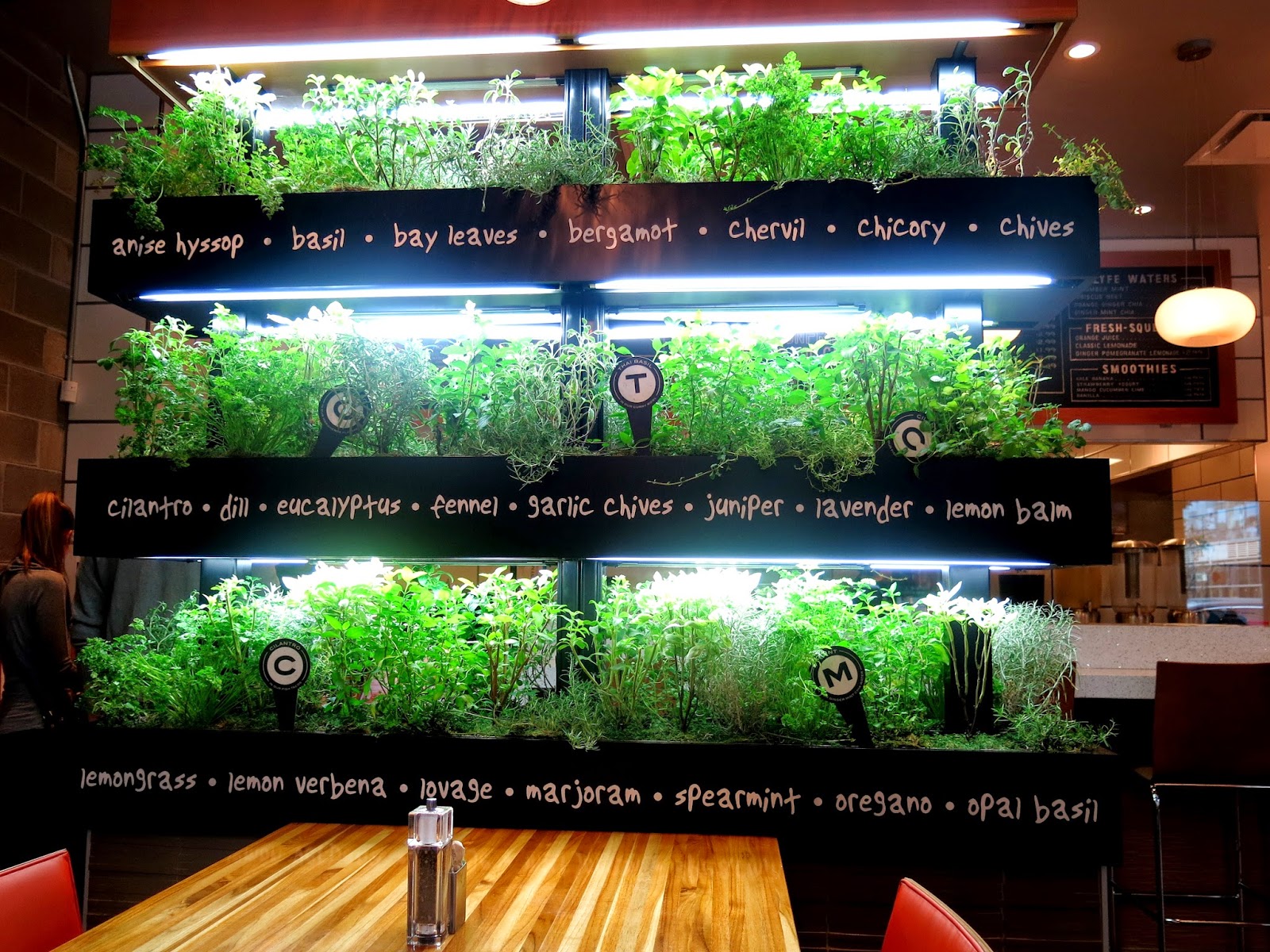 Lyfe Kitchen's dining area was wide open and sunny with warm wood tables, inspiring quotes on the walls, and an amazing herb garden wall marking off the head of the ordering line.  Once an order was placed and paid for, the cashiers would hand diners a locating device that would enable the food runners to find them no matter where they chose to sit.  "Ingenious!" Brocco proclaimed, grabbing one of the little square boxes.  "Brocco, put the screwdriver away and put the box down," Brandy pleaded as her companion threatened to dismantle the gadget to see its innards for himself, "Now what do we need to order for this little experiment of yours?"  "Oh, I don't know.  Let's try one of everything," said Brocco.  Brandy raised an eyebrow slightly at the suggestion, but decided to let the master scientist take the lead, and so almost the entire menu was ordered. 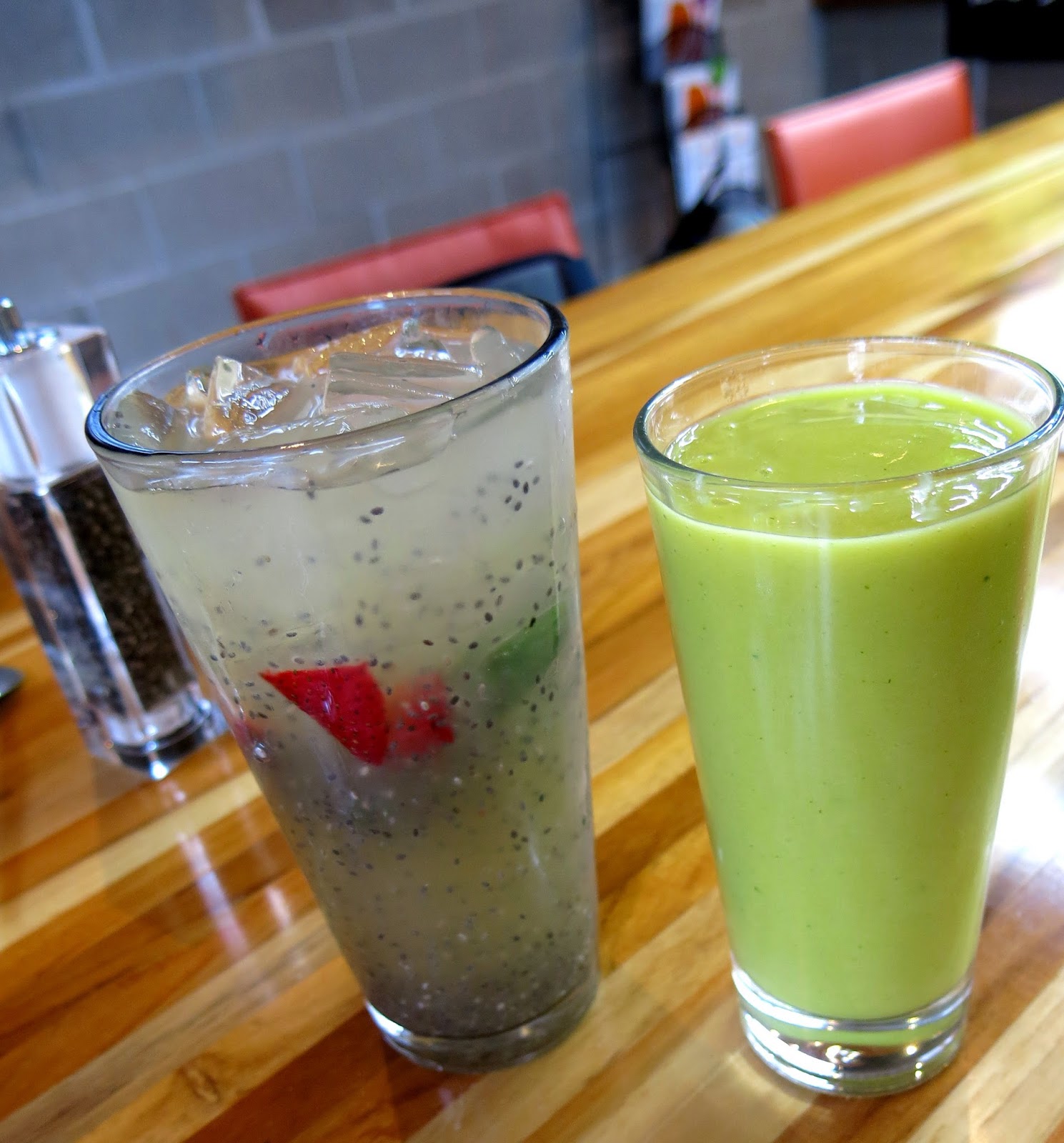 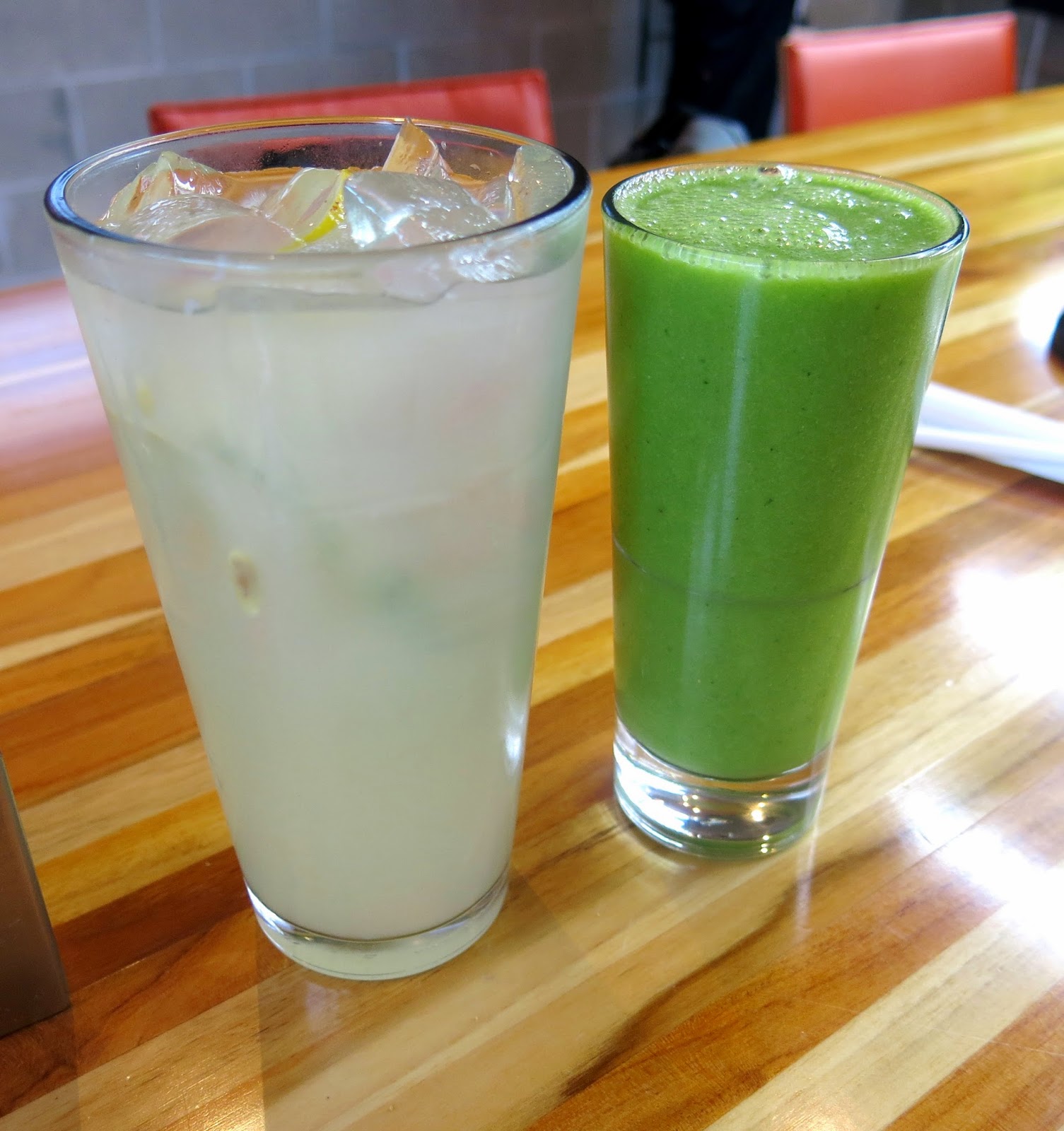 First to the table was a rainbow of drinks: a Kale Banana Smoothie, a Mango Cucumber Lime Smoothie, a Cucumber Mint Lyfe Water, an Orange Ginger Chia Lyfe Water, a Ginger Mint Chia Lyfe Water, and a house made Lemonade.  Brandy and Brocco popped two straws in each glass and lined them up like an old timey soda fountain counter.  The smoothies were indeed smooth with nice sweet flavors that didn't let on that their ingredients were very healthy indeed.  The Lyfe waters and lemonade were extremely refreshing and light, while the ones with chia seeds were also just plane fun to look at. 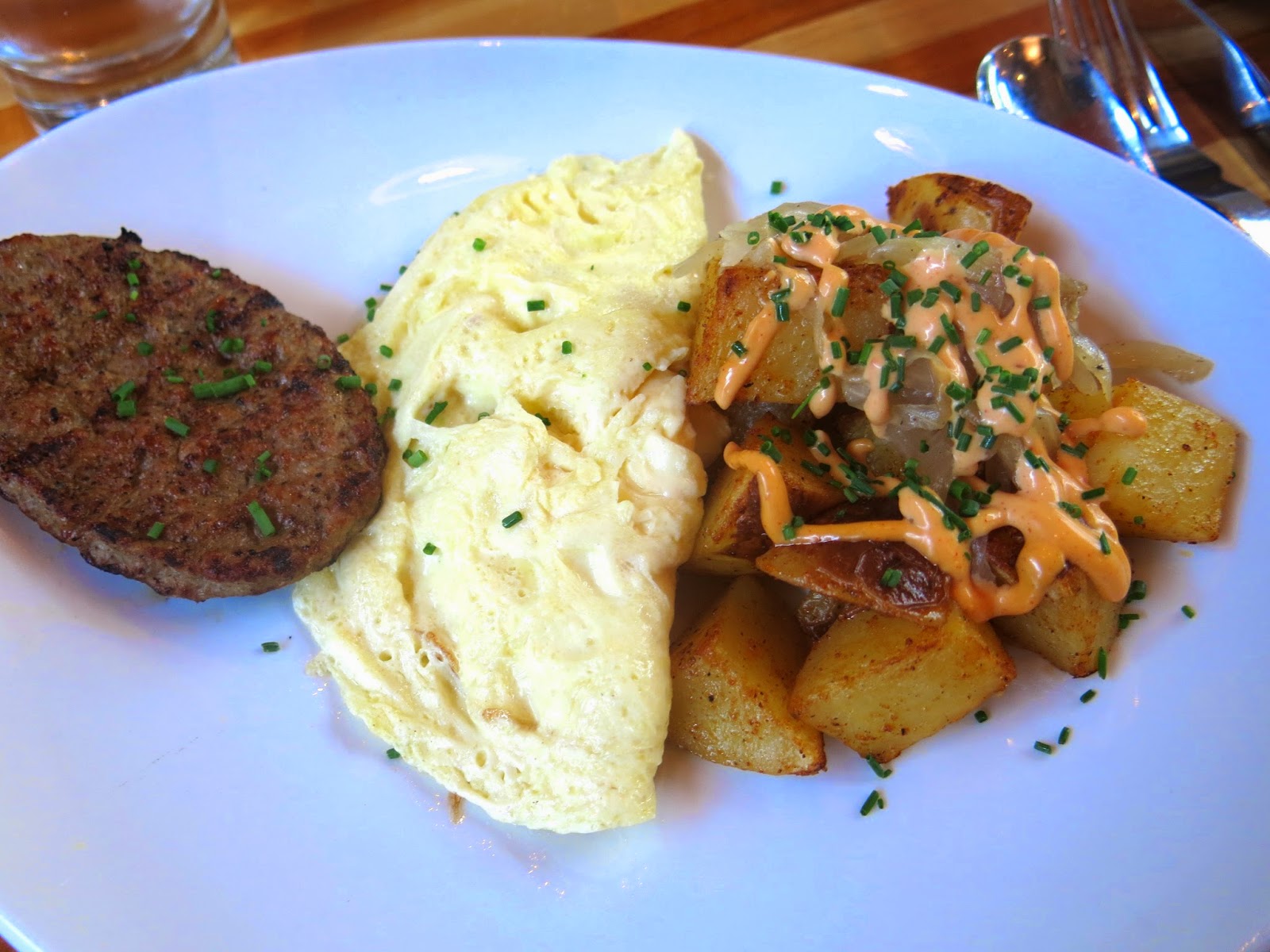 With almost the entire breakfast menu making their way to them, Brandy and Brocco dived in head first.  The Classic Breakfast was just that; a turkey sausage patty, an egg white omelet, and potato hash with a chipotle mayo, all of which Brandy thought were very well done and satisfying.  The Spinach and Avocado Frittata had a lovely, fluffy texture and came with another side of the chipotle mayo potatoes, which Brocco really took a shine to for their subtle spiciness that was just enough to wake up one's palate. 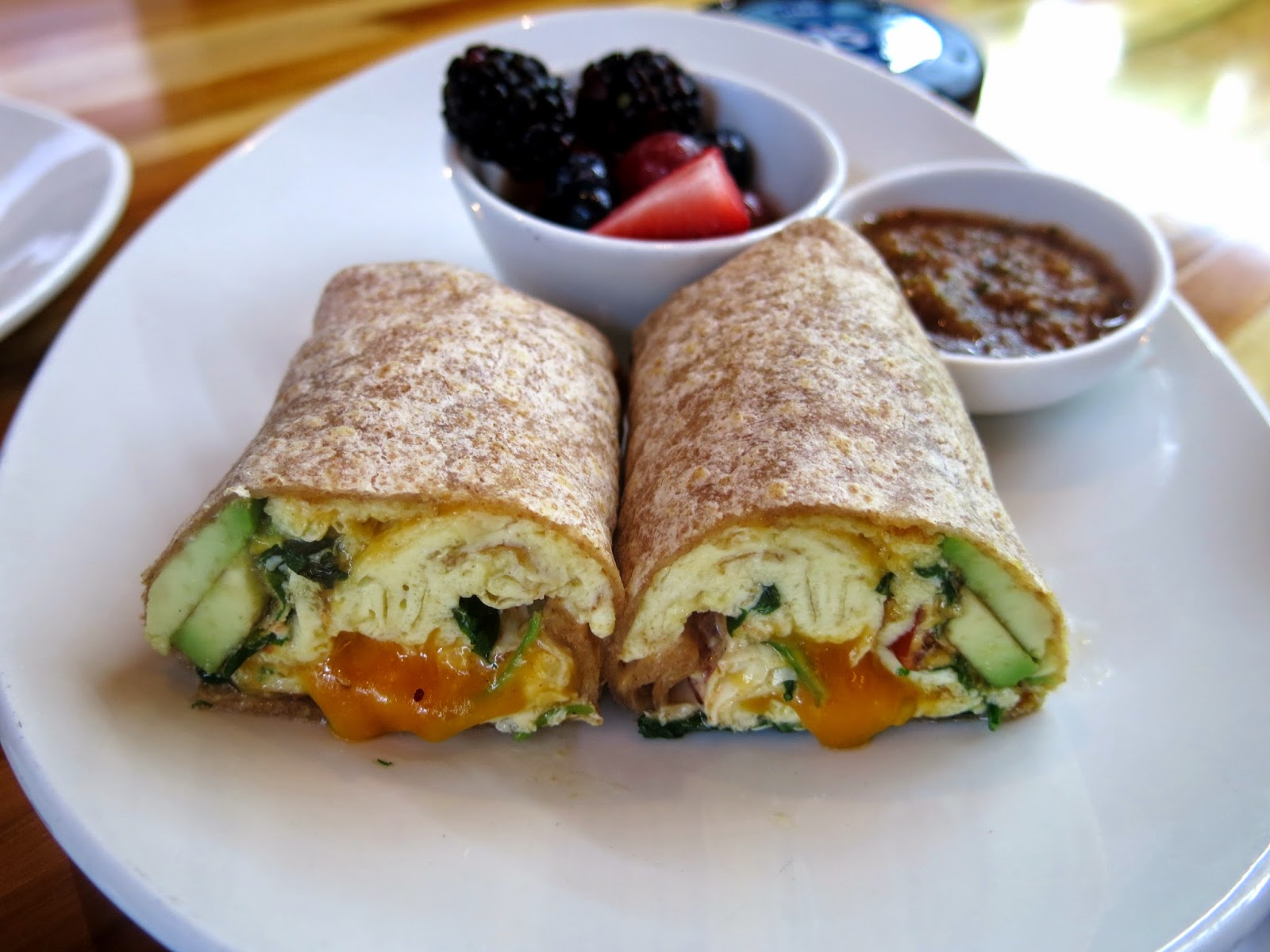 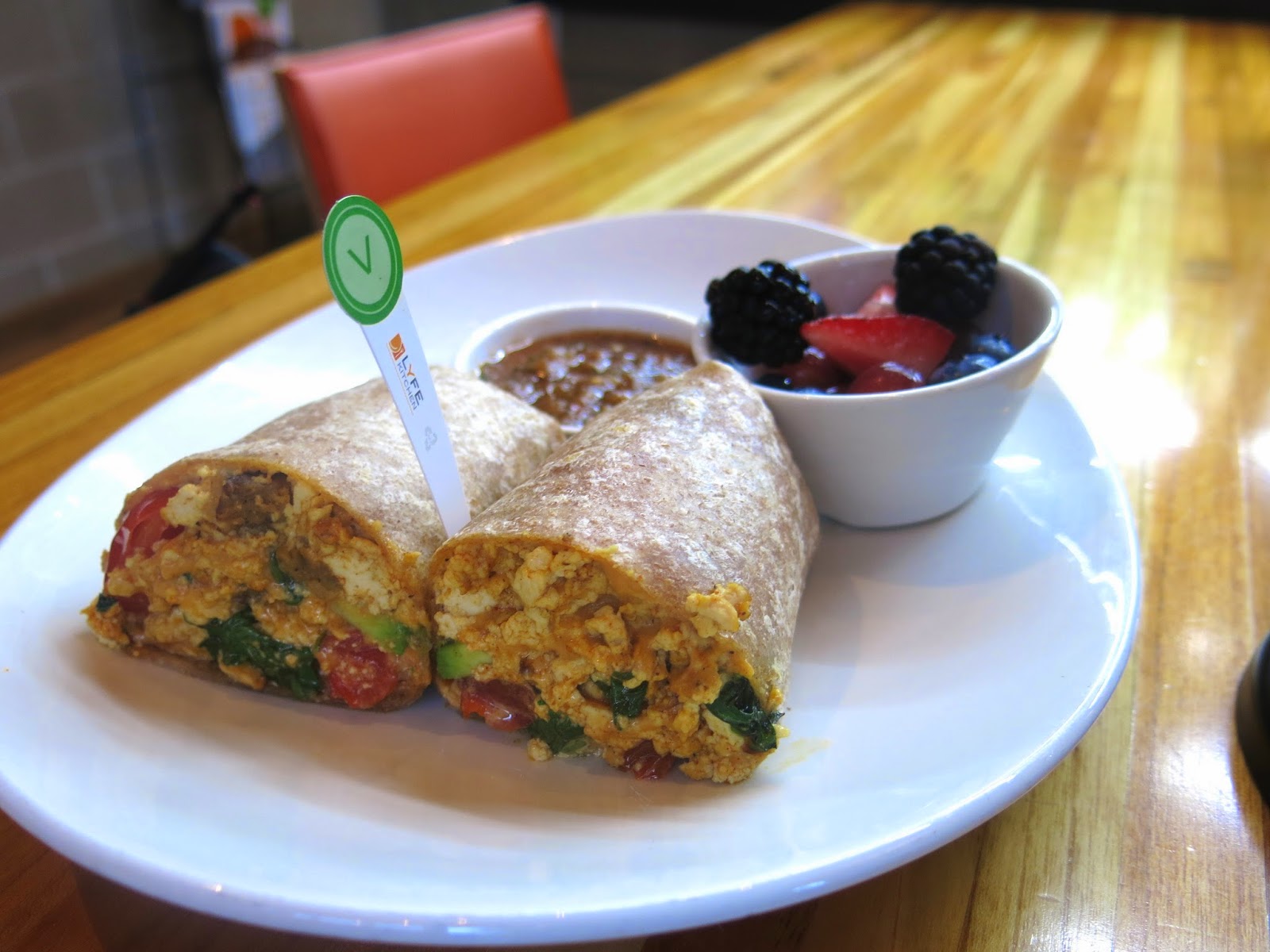 There were two Breakfast Burritos next, one with eggs and one with marinated tofu.  The egg burrito featured fresh arugula, avocado, tomato, and melty cheddar cheese, while the tofu one had the same with the addition of meatless sausage.  While both Brandy and Brocco very much enjoyed the egg burrito, they both agreed that the depth of flavor in the tofu wrap brought the dish to a new level. 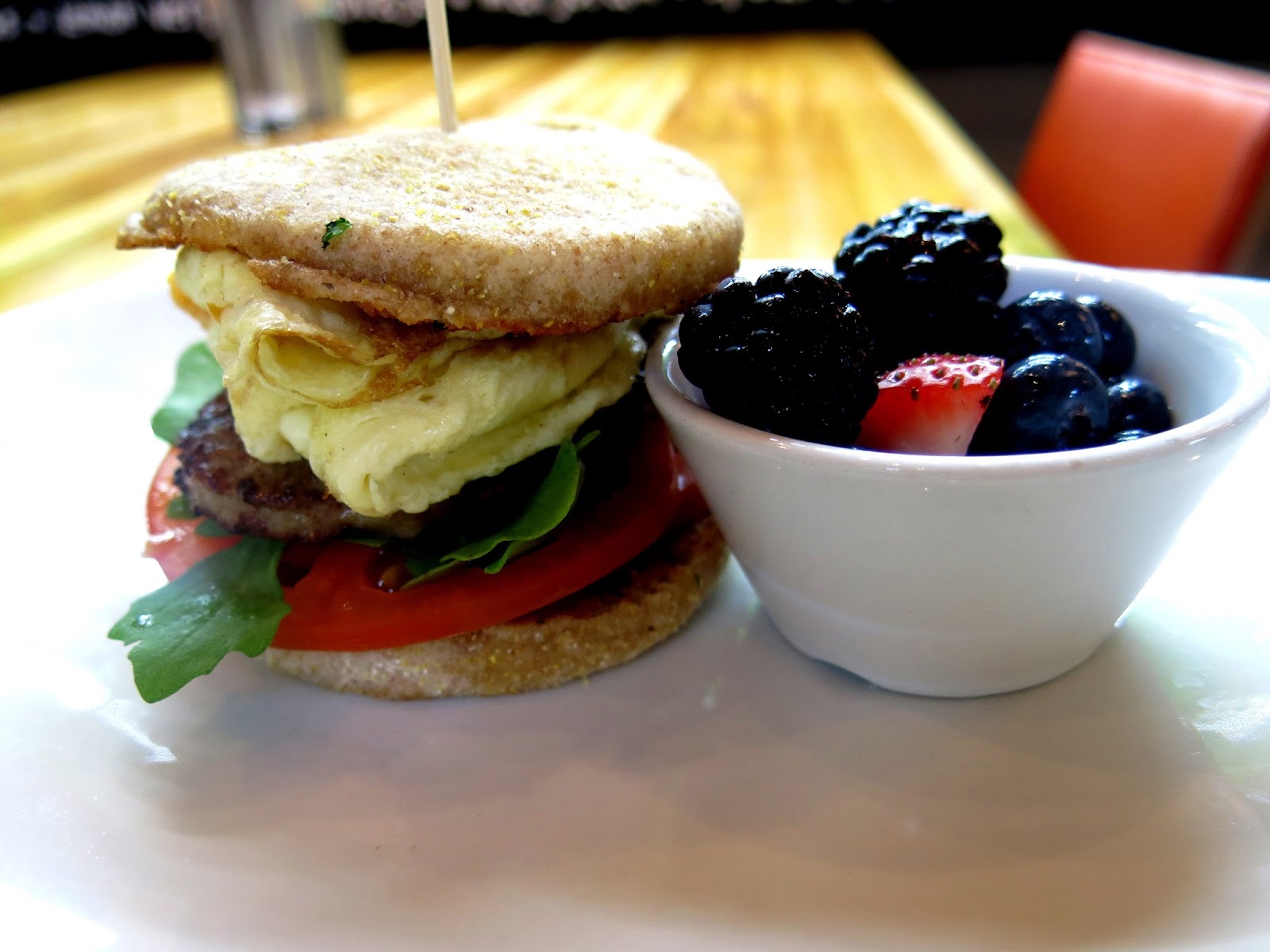 The Breakfast Sandwich was another pretty typical offering done very well, with scrambled eggs, turkey sausage, cheddar cheese, tomato, and greens on an English muffin, served with a side of fresh berries.  Brandy was very happy to see the addition of the tomato to brighten things up, since a lot of breakfast sandwiches forget that very important aspect. 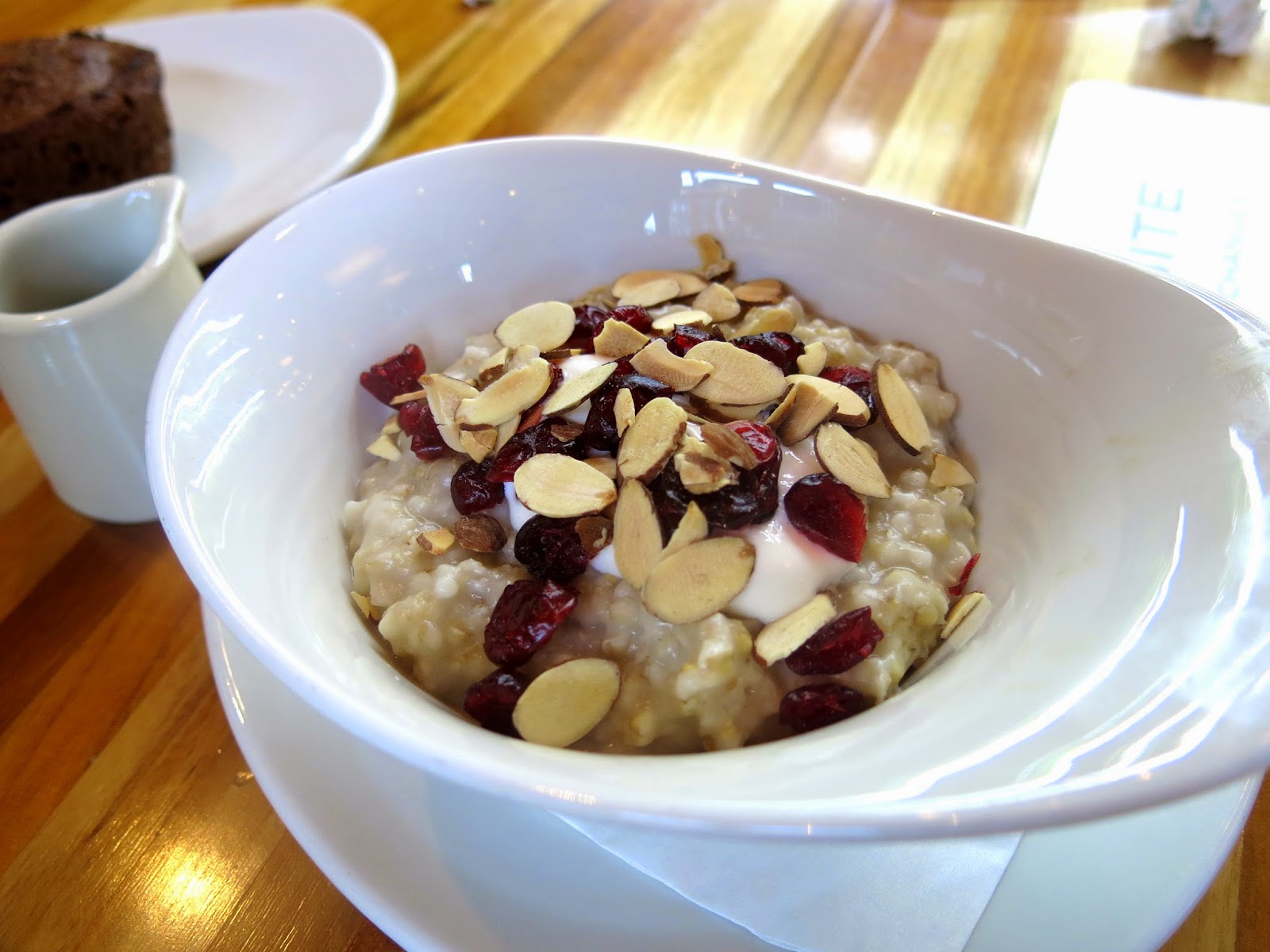 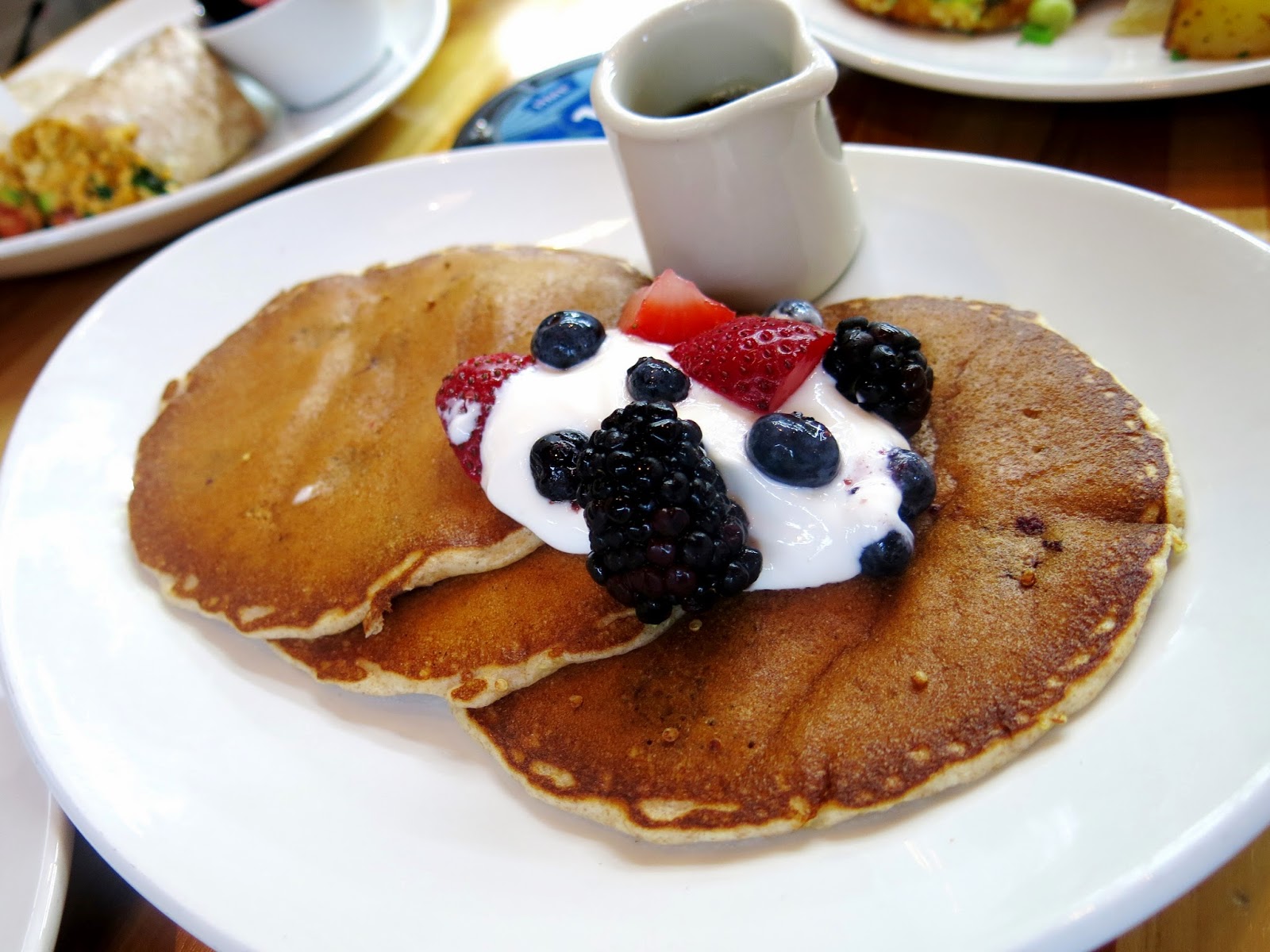 Next were the Quinoa Buttermilk Pancakes, Art's Oatmeal Start, and the Carrot Zucchini Walnut Muffin to sweeten things up.  Brandy was surprised to enjoy the muffin as much as she did, as it was amazingly moist and surprisingly sweet.  The oatmeal was nice and creamy and had a good mix of textures and flavors from the crunchy almonds, chewy cranberries, and tangy yogurt on top.  Brocco was rather fond of the pancakes, which were quite dense and filling with a surprising crunch from the quinoa that had been incorporated into the batter.

"Well, we've done it," Brocco said happily, "We've concured the whole menu."  "Not quite," Brandy said, watching as one of the workers changed over the menus from breakfast to lunch, "We should really try a few of the lunch entrees.  You know.. for science's sake."  "For science!" proclaimed Brocco, finishing off the last of his smoothie. 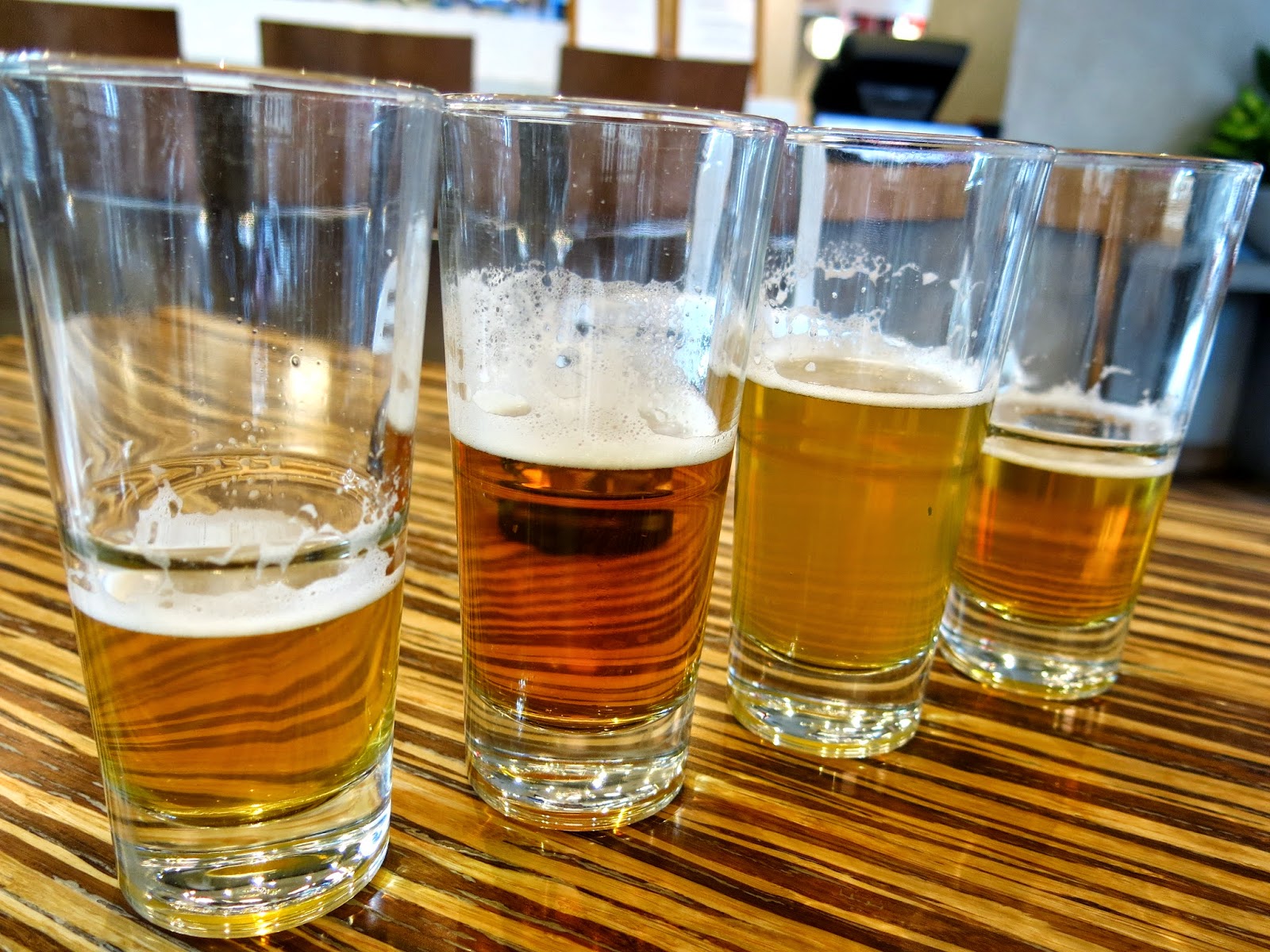 For lunch, they chose to sample the beer offerings on tap, which came in four varieties:  Sam Adams IPA, Tighthead Blonde, Revolution Golden Ale, and Boulevard Tank 7.  Brandy favored the Revolution, which had a subtle citrus taste she felt could stand up to more savory dishes.  Brocco liked the lighter Tighthead, which had a pleasant sort of sourness to it.  Brandy was impressed with the selection all around, especially since for the most part, the choices were all local and micro brewed. 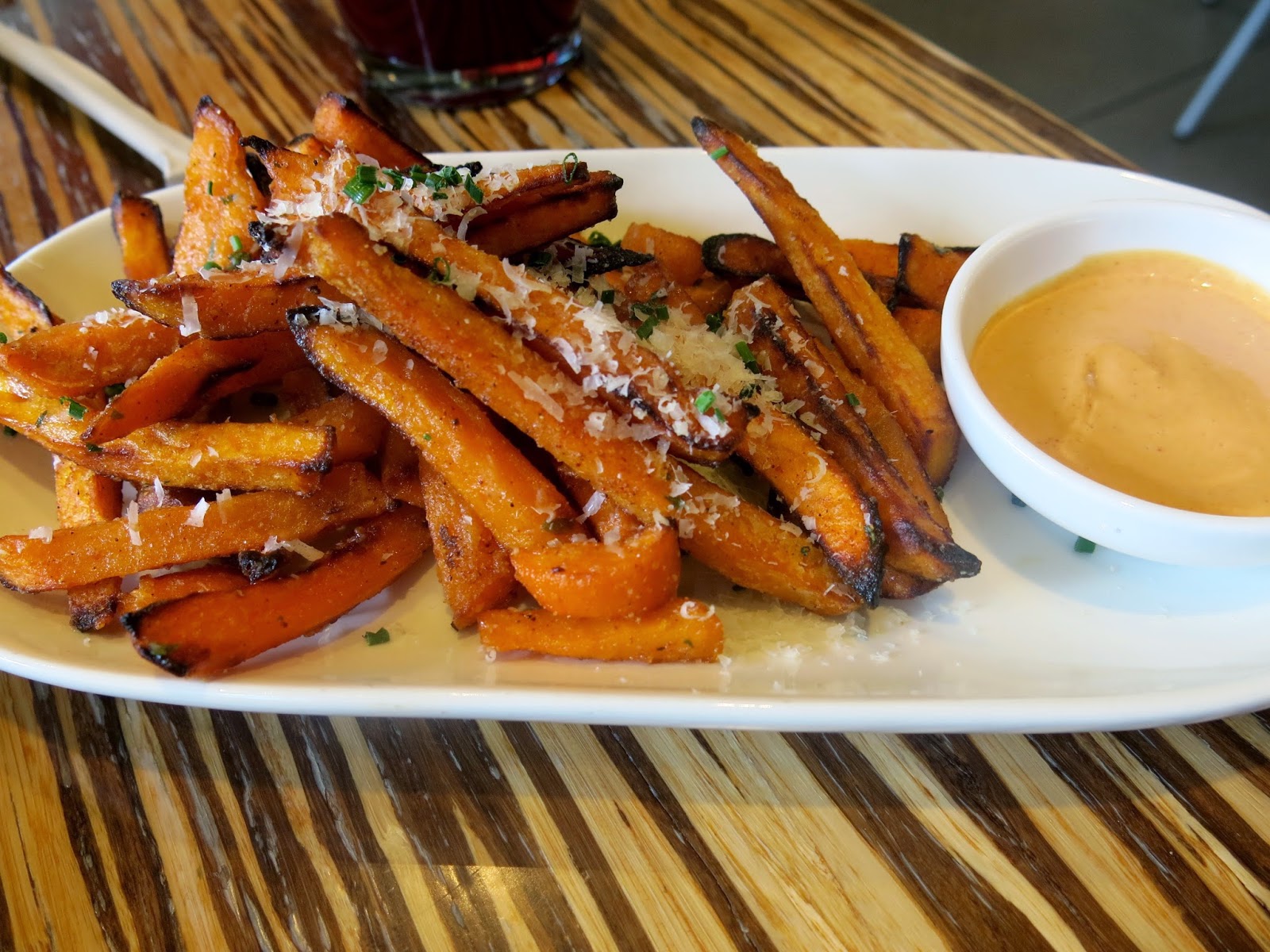 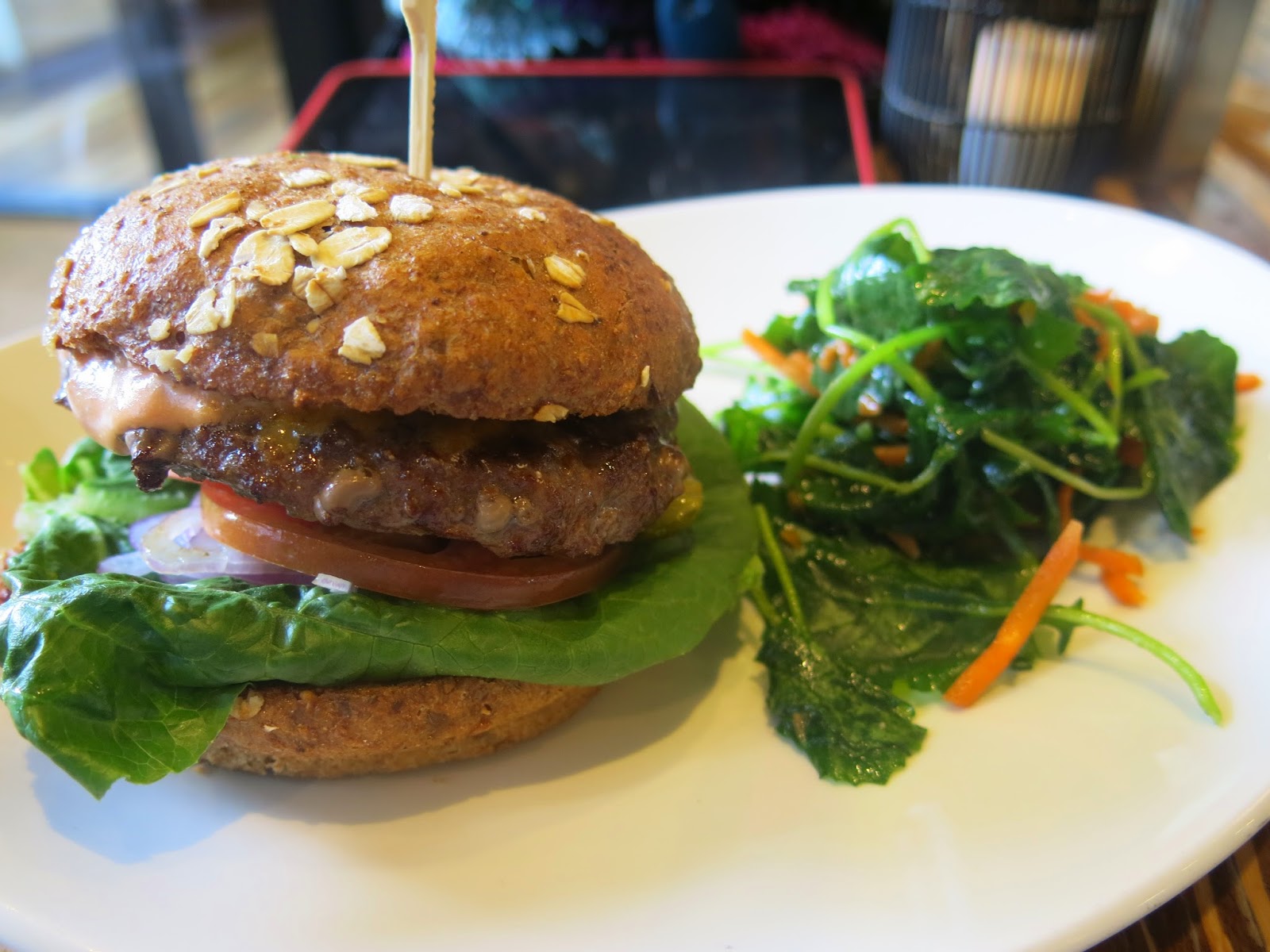 For his entree, Brocco went for the Grass fed Burger with a side of Garlic Parmesan Sweet Potato Fries.  Seeing the burger and fries before him, Brocco found it more difficult to believe than ever that everything on the menu was under 600 calories and low in sodium.  The fries had a perfect crispy texture to them, and although Brocco had difficulty finding the garlic flavor, he loved the delicacy of the cheese and the side of more chipotle mayo for dipping.  The burger was quite juicy and flavorful, though Brocco would have liked to top it with a bit more of that spicy mayo. 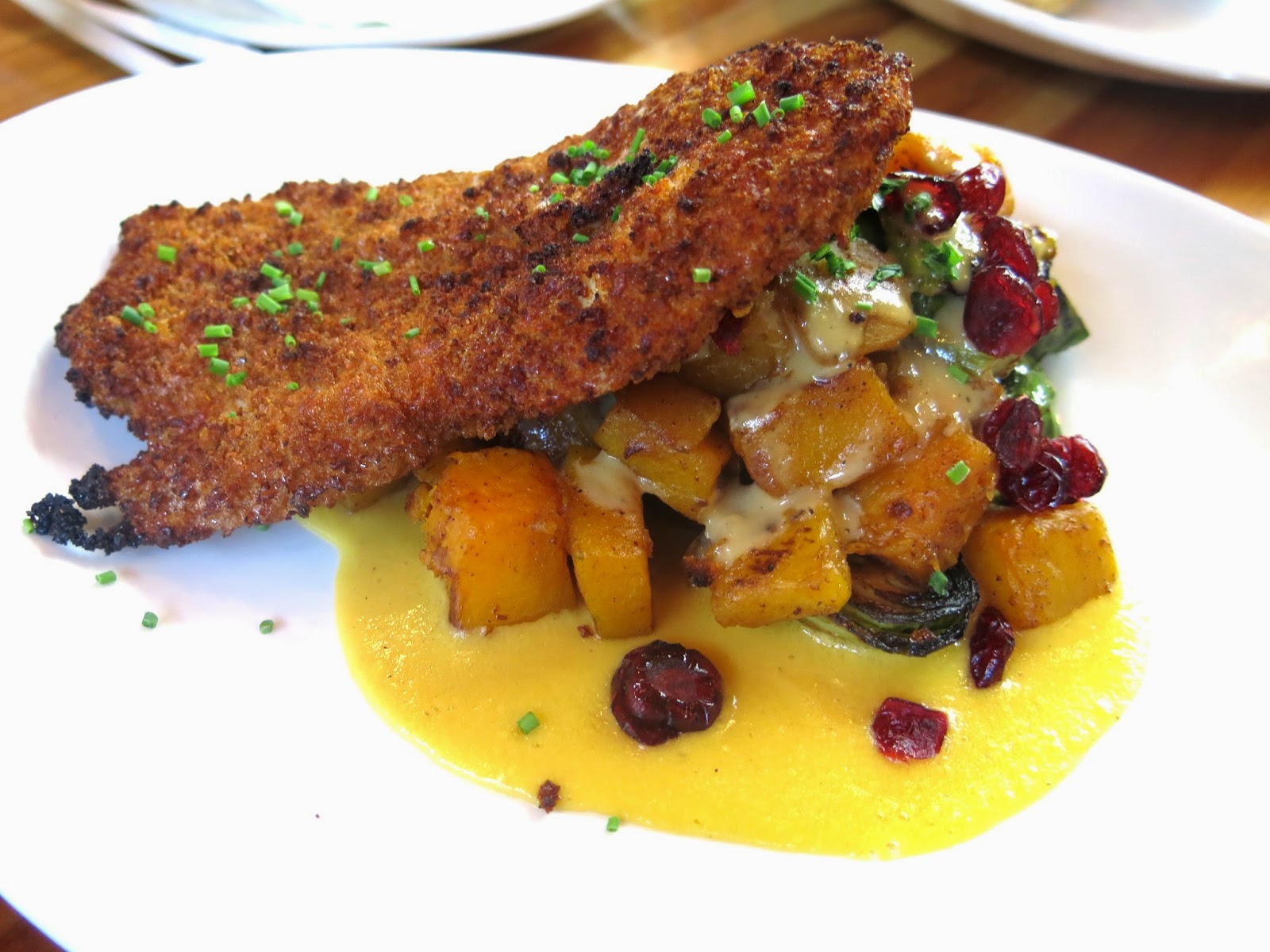 Brandy chose Art's Un-Fried Chicken, which came with a saute of sprouts, butternut squash, cranberries, and a cashew cream.  Brandy could not have loved the crispy chicken more, which was actually over baked with a sort of bread crumb like coating.  The chicken was juicy and succulent, while the veggies were tender, yet not over done, and a perfect match to the protein.  "I don't know if I buy that this chicken hasn't been fried," Brandy said suspiciously, "I might have to take a look at those kitchens to be sure."  One of the workers stopped her before she could enter, but assured her that the chicken was indeed cooked in a special oven that could be programmed to cook every single dish to perfection within five minutes.

Rounding off a full day of eating, Brandy and Brocco tried a few of the chewy and delicious Chocolate Chip Cookies, which incredibly were vegan.  "So there's no eggs in these?" Brandy asked.  "Nope," said Brocco.  "No milk?" queried Brandy.  "Nope," said Brocco.  "No butter?!" insisted Brandy.  Brocco shook his head.  "Well, I'll be!" exclaimed Brandy and stuffed another one in her mouth. 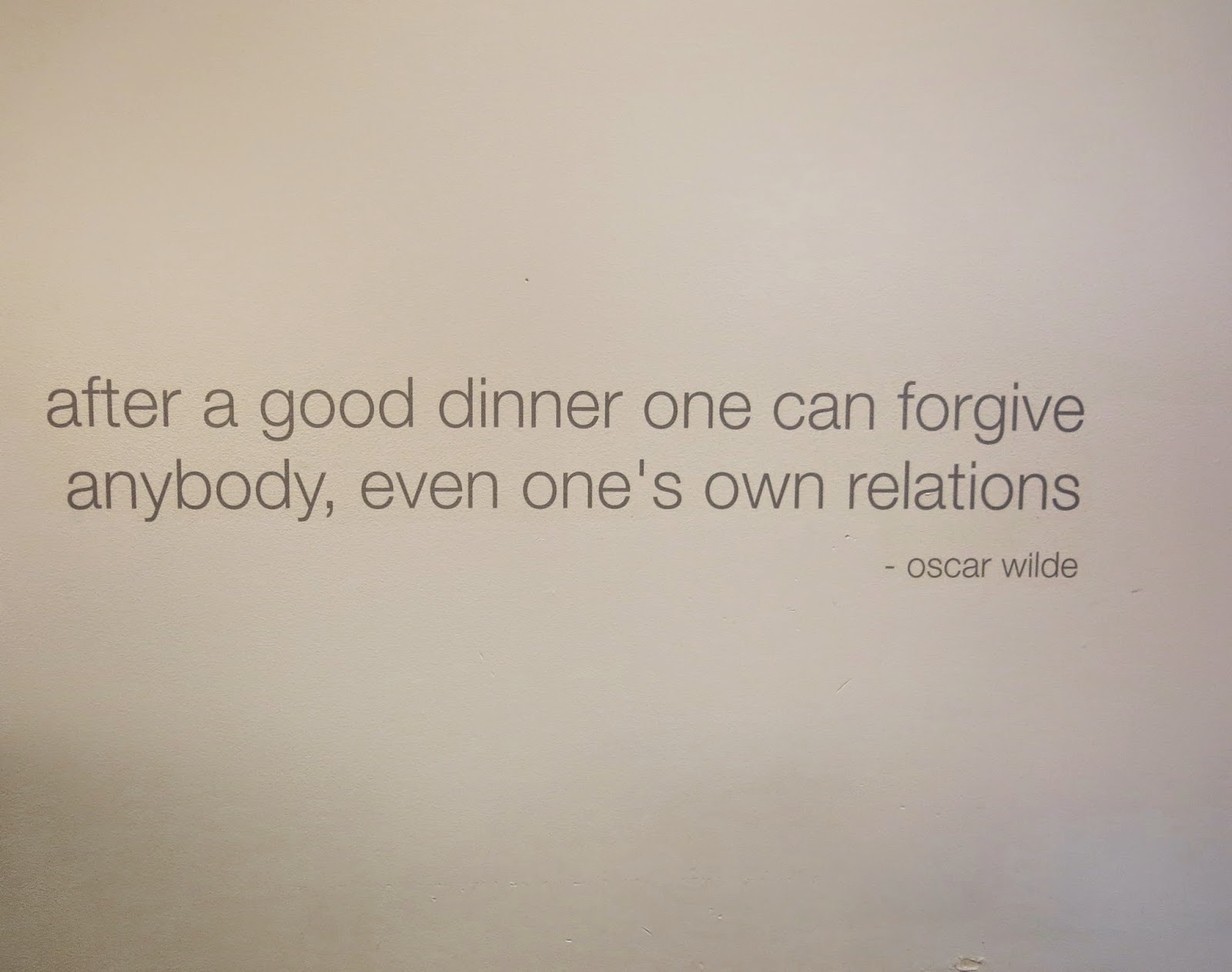 Lyfe Kitchen certainly did make a "lifer" out of Brandy with their forward thinking ideas of what casual dining can be.  Everything on the breakfast menu was not only low in calories and sodium, but also priced well below $10 (the lunch and dinner menus didn't top $15) and made from local, organic ingredients, making it hard to beat in a sometimes over saturated fast food breakfast market.  "Have you gotten the kind of statistics you were hoping for?" Brady asked Brocco as they headed out.  "More than I was hoping for!  The capacity of your stomach is truly an impressive thing."  "Excuse me?"  "Oh, my study was actually on you.  I've always been fascinated by the amount of food you're able to consume in a single sitting.  That's why I wanted to go somewhere healthy, so you didn't do too much damage to yourself during the experiment."  A few minutes later, Brocco woke up on the sidewalk alone with his glasses bent and a rather painful hand mark across his left cheek.

The writers of this blog were invited to sample the menu by the restaurant at no cost in exchange for an honest review.
The Short and Sweet Review 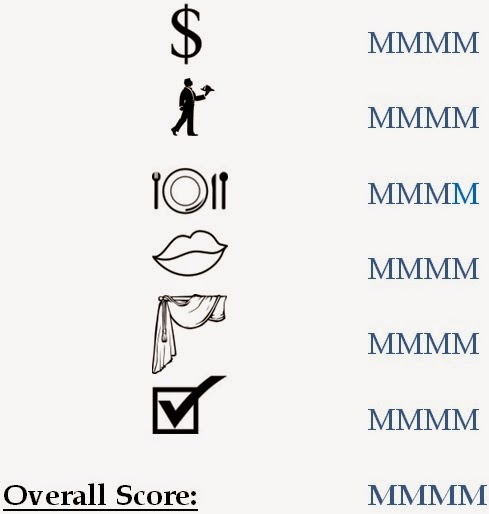