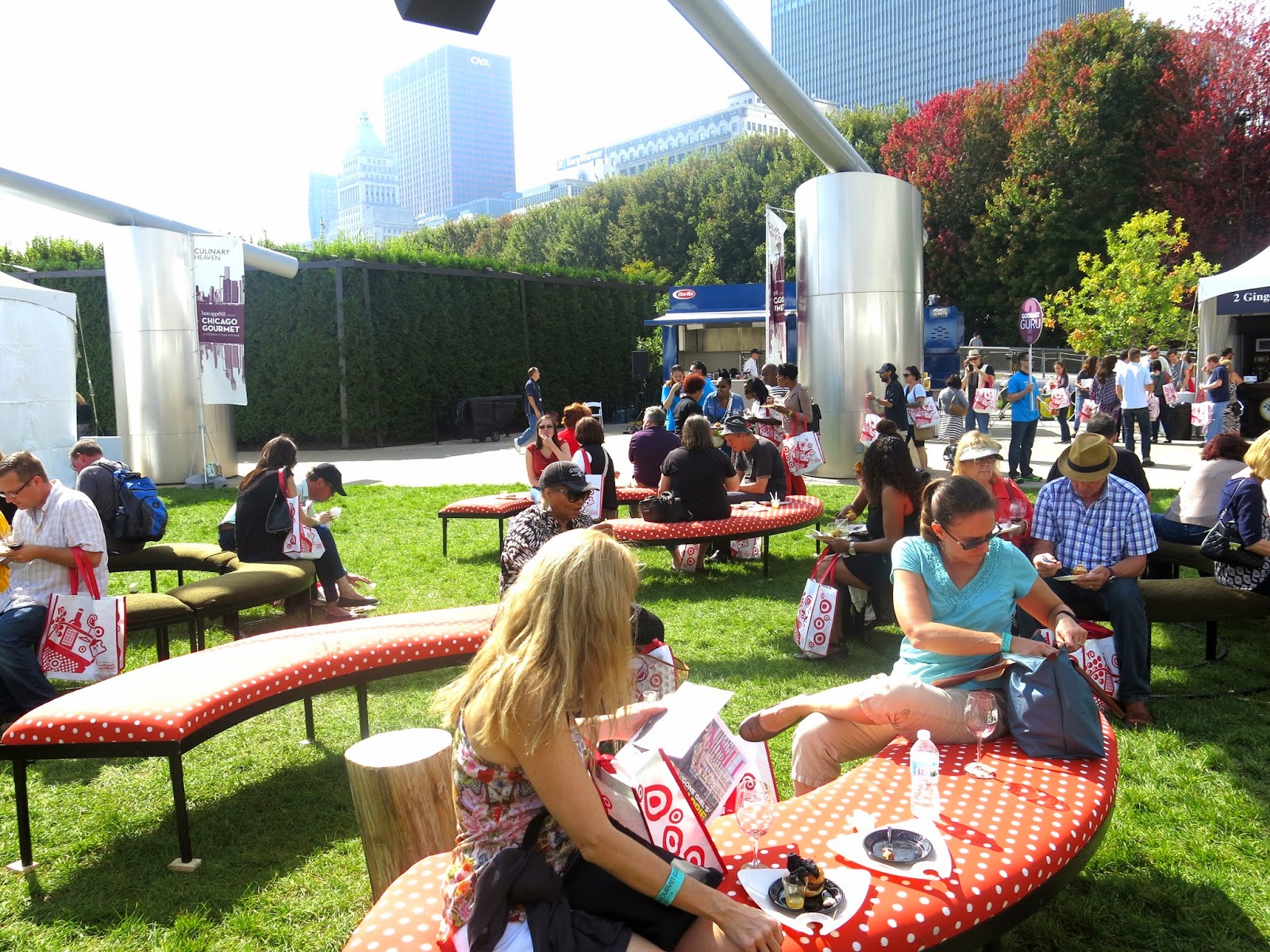 Being as old as Brandy is, it's hard for her to remember a lot of things in full detail, but one thing she is reminded of every year is what it's like to be a child at Christmas.  The anticipation the night before, the surge of excitement when the morning finally dawns, the joy at the sight of all the presents under a sparkling tree, all of this Brandy experiences in late summer every year when the Chicago Gourmet festival is upon us.  "Yes, it is foodie Christmas," Brandy fondly sighs, "From June when the tickets go on sale to that glorious weekend in September I feel just like I felt when I was a child in the lead up to Christmas." 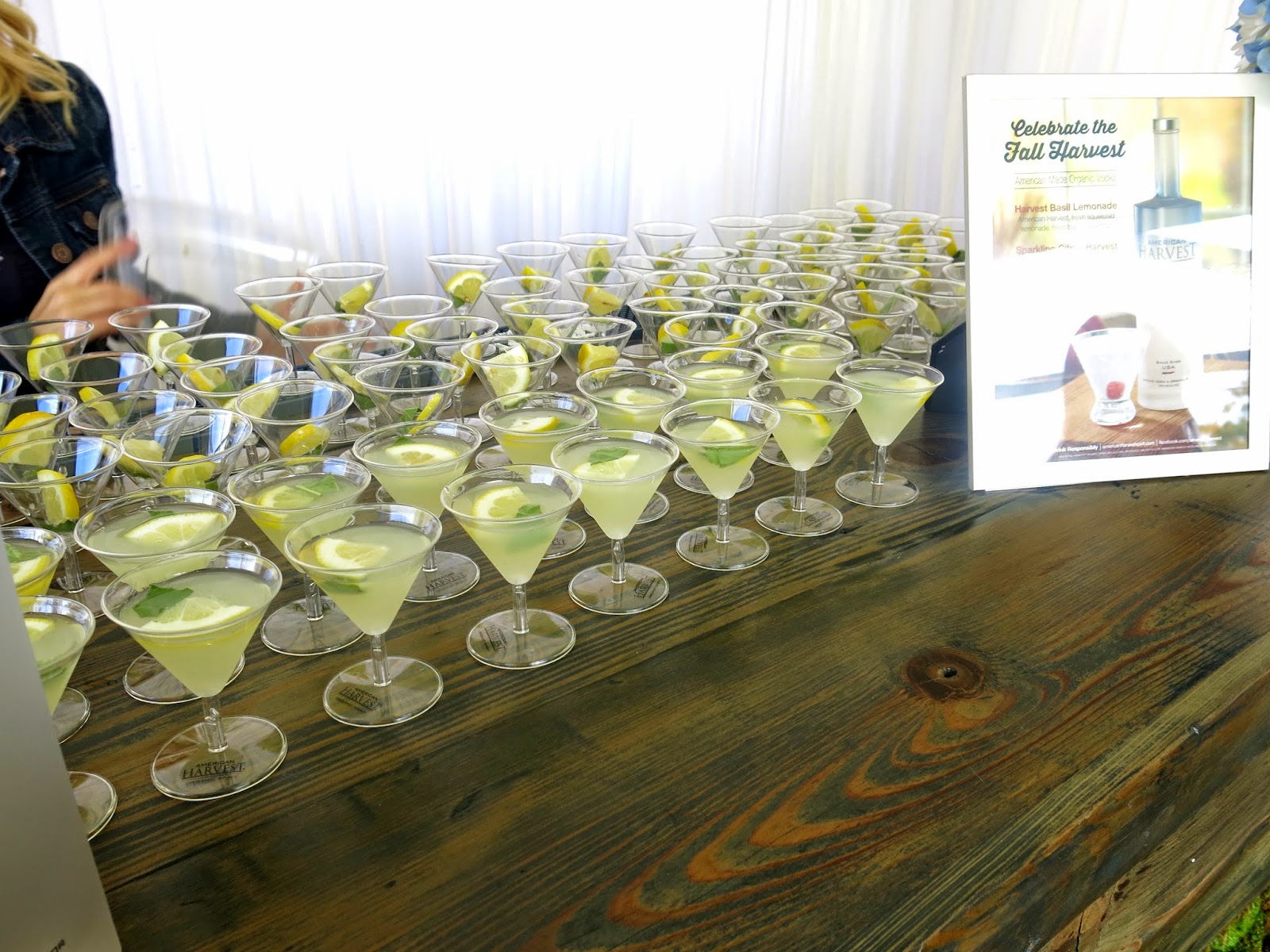 This year's festival promised to be the most extravagant ever with plenty of star power to boot.  Chicago icons like Rick Bayless, Graham Elliot, and Stephanie Izard as well as national super stars like Carla Hall, Spike Mendelsohn, and Masaharu Morimoto and so many others were all present for demos, book signings, and tastings.  "The difference between this and a music festival is the simple fact that people can interact with their favorite stars here in a more personal and direct way," Brandy observed, "These chefs are here to give their food, like a gift, to the masses, not show off.  Perhaps that's why there seem to be no egos among even the most accomplished chefs.  Everyone is happy to shake hands, sign autographs, and talk food no matter how many James Beard Awards they have under their belts!" 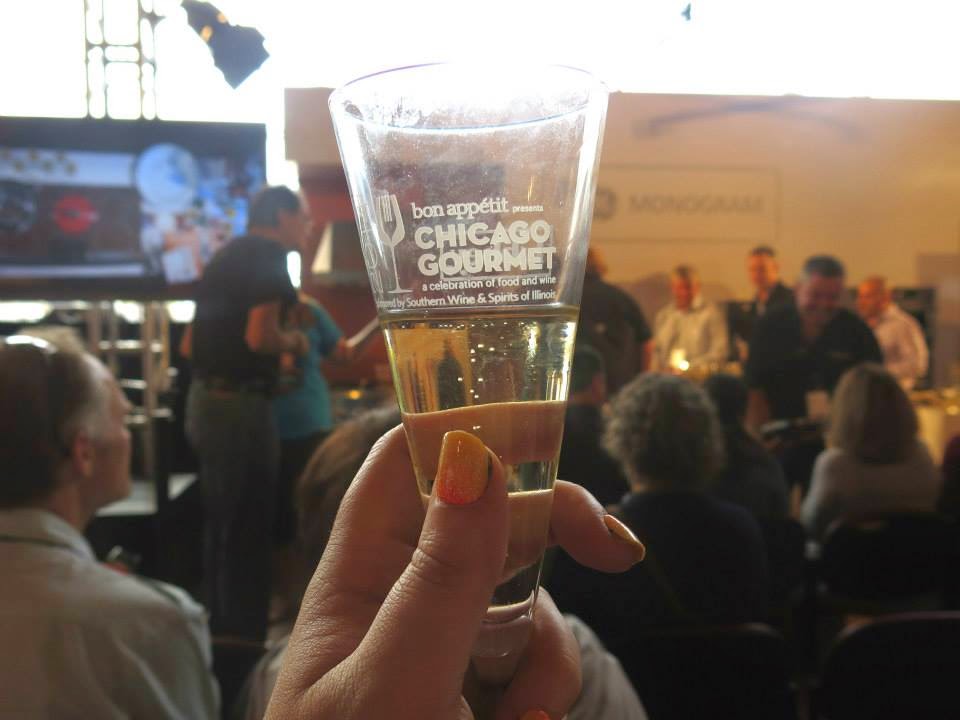 After the inaugural toast made by Mayor Rahm Emanuel, Brandy took a minute to bask in the beautiful weather before diving in head first to the tasting pavilions, gathering up as many bites as she could before the change over at 3:00.  There were surprising amounts of the same sorts of things (lots of sliders, several octopus dishes, and on the sweet side at least five different kinds of donuts), but plenty of restaurants and chefs easily stood out in the crowd.  Lines at the Supreme Lobster Pavilion were as long as ever, but the new BBQ Pavilion also got it's share of attention. 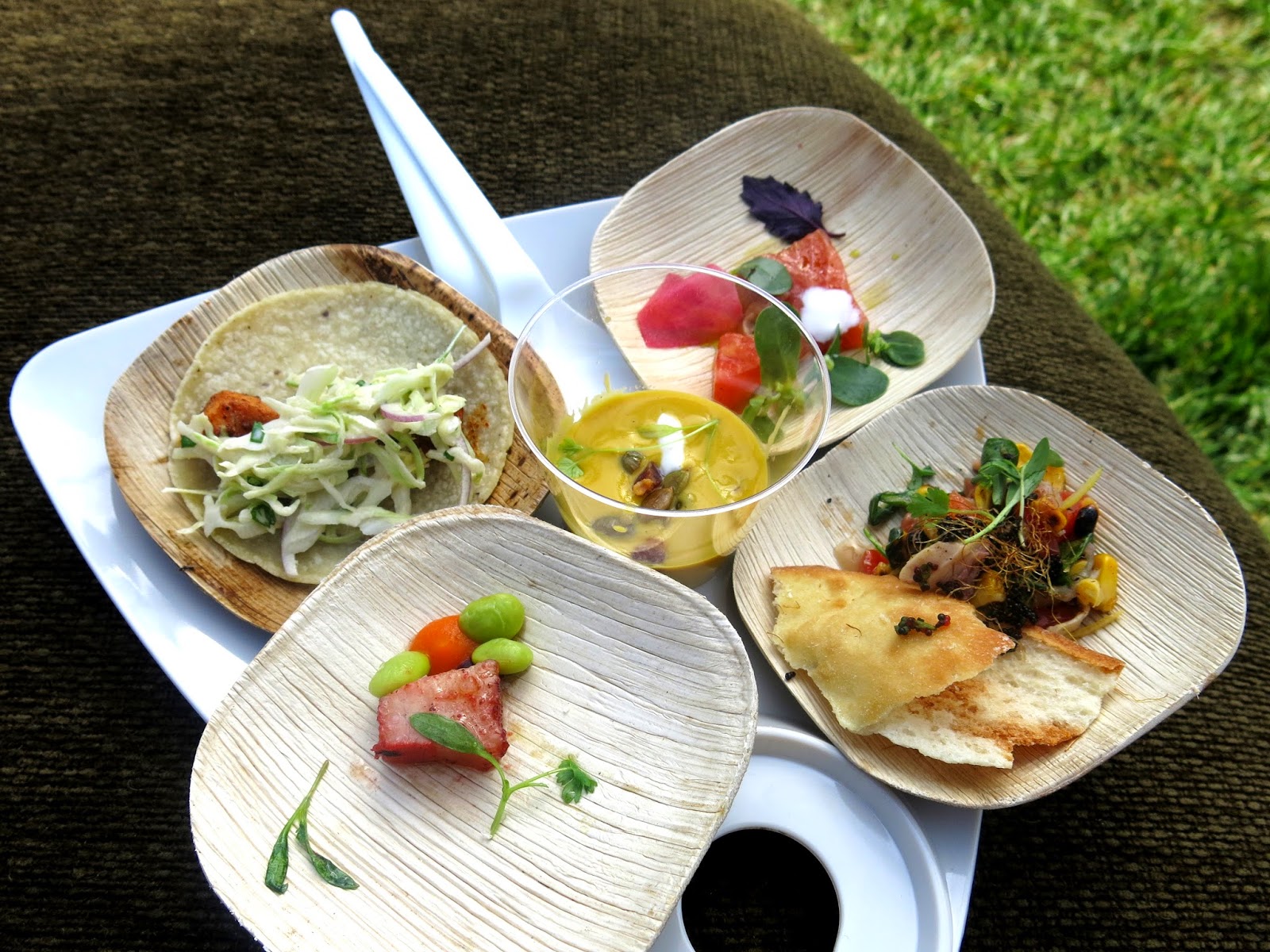 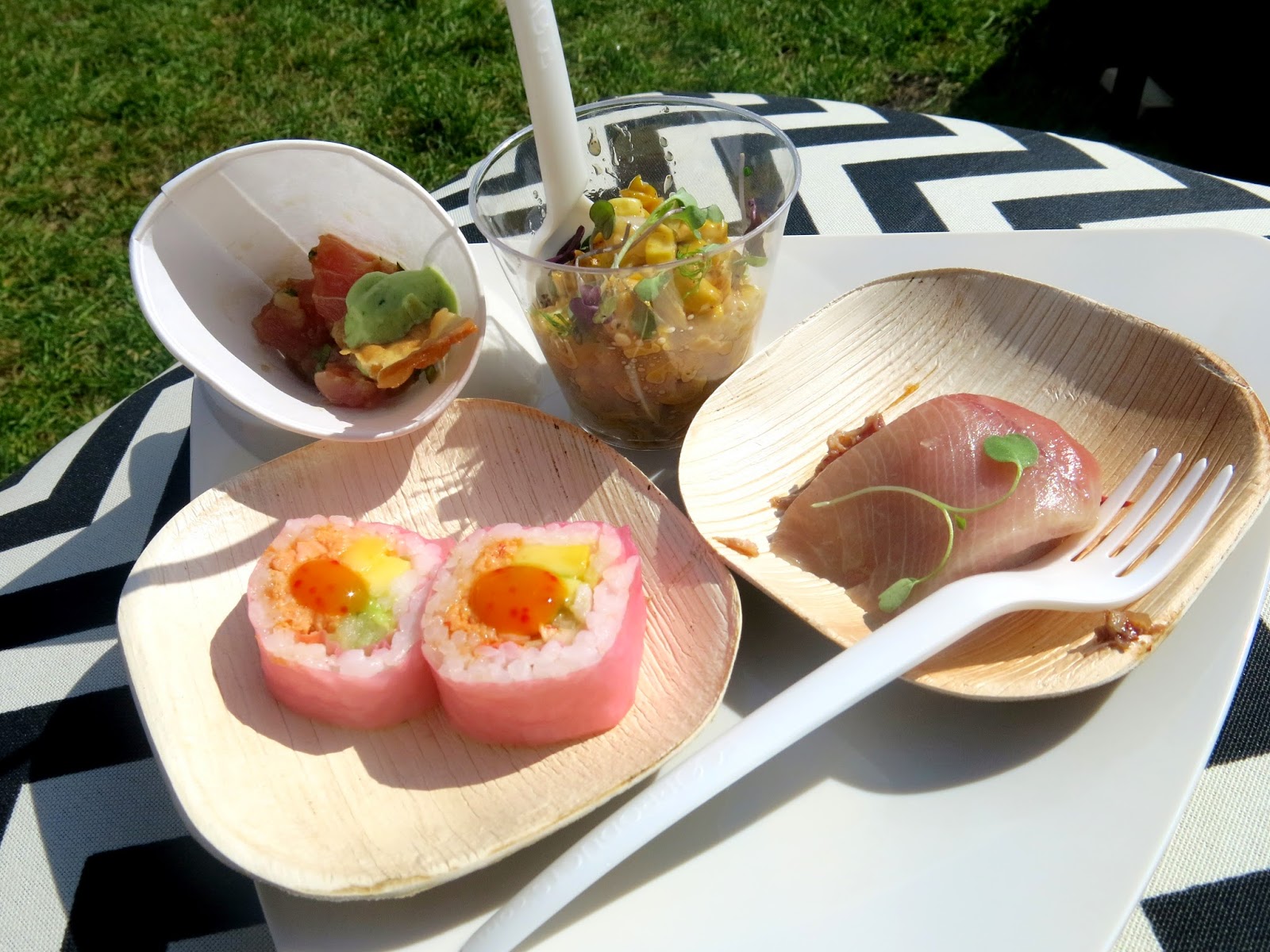 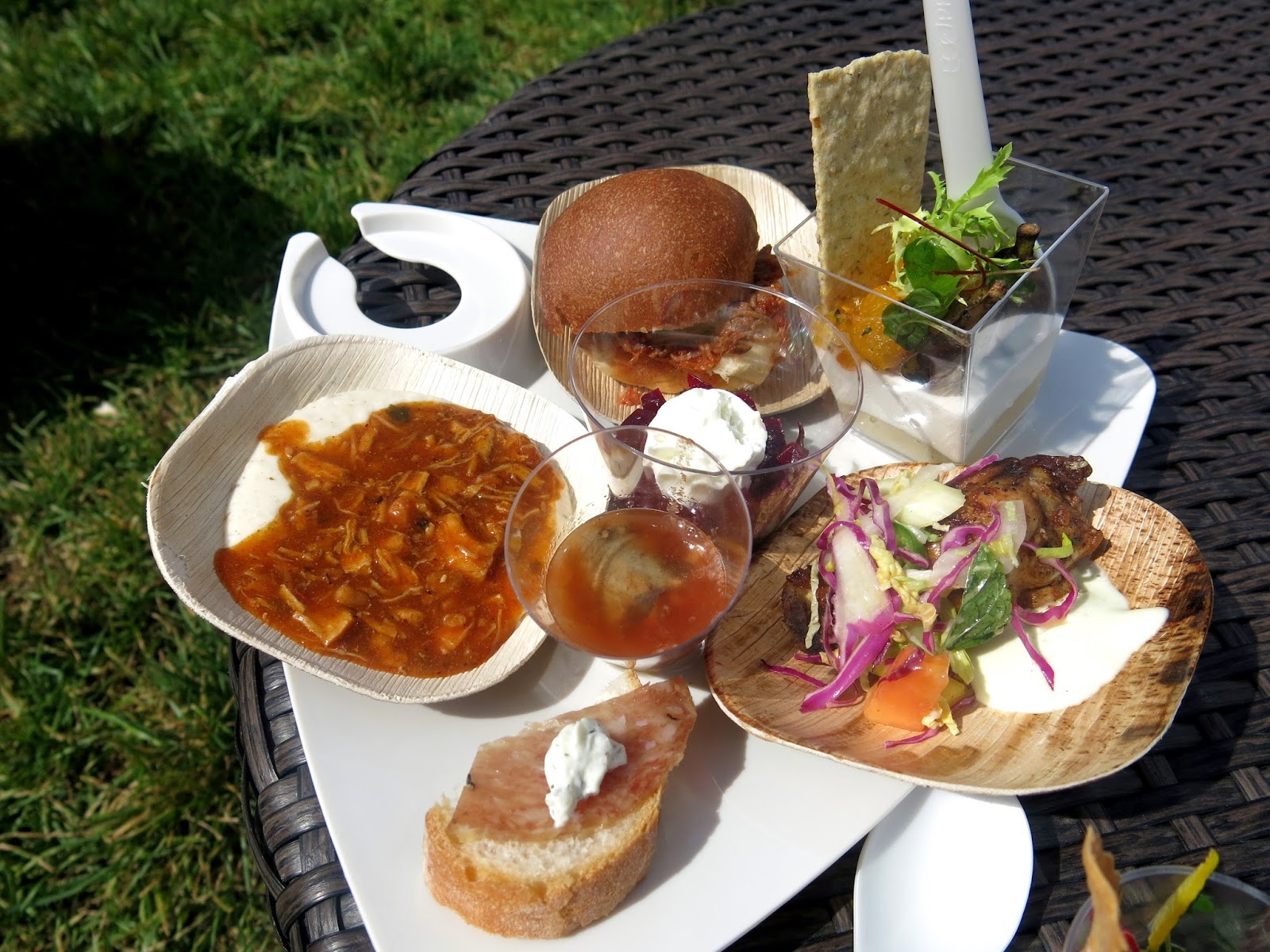 As always seems to happen, Brandy found favorites right away.  Jared Van Camp brought Leghorn's famous Hot Chicken Sandwich, which was a pretty substantial portion of fried chicken breast on a soft house made bun with shaved vegetable slaw and just a touch of hot sauce.  Paul Fehribach from Big Jones showcased an end of summer bisque made of eggplant and pecans, served chilled with poached shrimp and wax beans, which made for a nice change from the usual fall flavored squash soups others were serving, though Jon Keeley of Gemini Bistro and Rustic House had a pretty tasty butternut squash soup with pumpkin seeds and bacon lardons.  Jimmy Bannos Sr. of Heaven on Seven and The Purple Pig had a Creole chicken and cheesy grits that Brandy would have happily eaten a full sized plate of, and in the same pavilion, Stetson's Modern Steak and Sushi had an amazing cup of fall vegetables with mandarin orange, roasted fig, goat cheese, spiced pear puree.  There was an over abundance of seafood dishes, but Brandy's favorite among the crowd was the lobster mango roll from Jellyfish, which was not only tasty, but one of the prettiest dishes there. 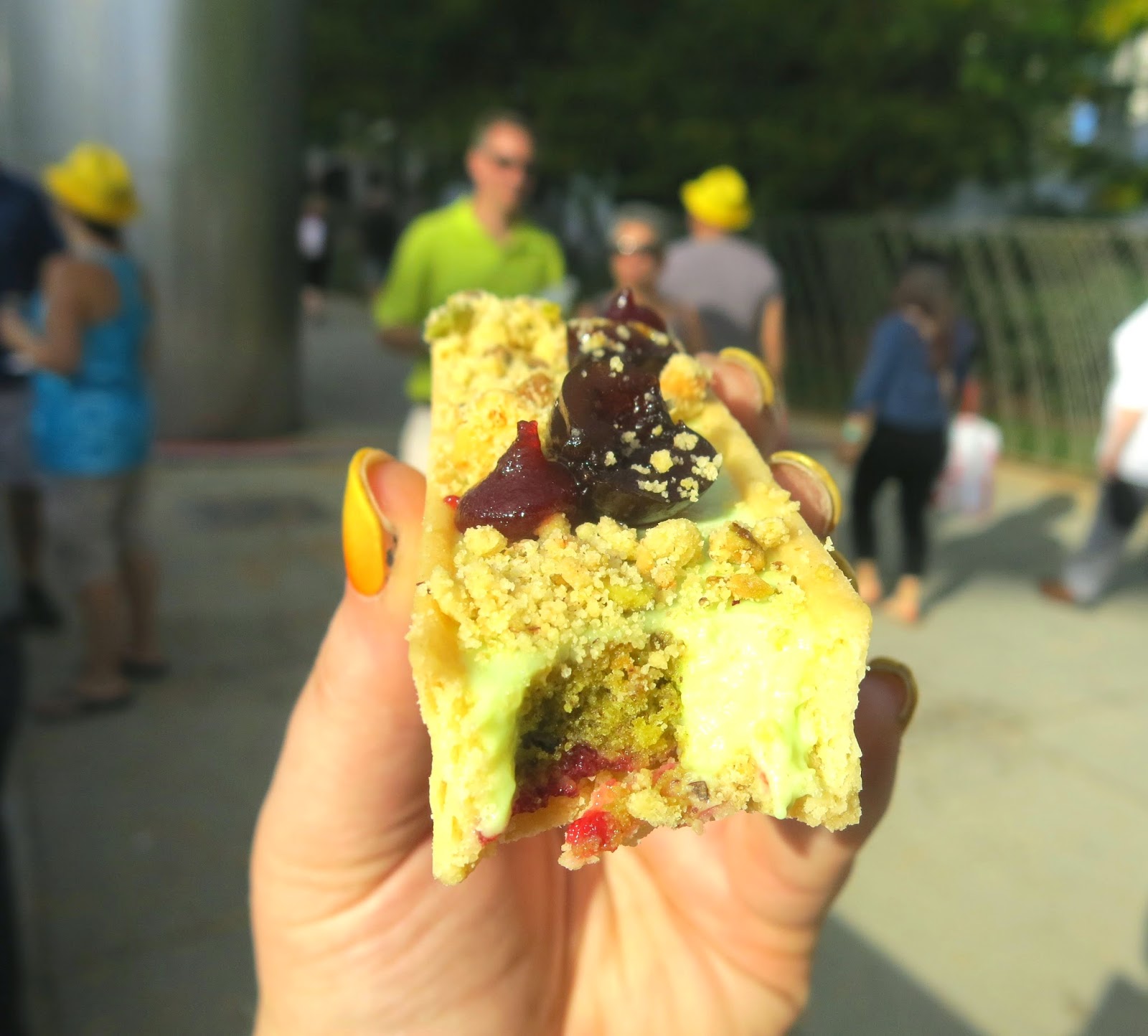 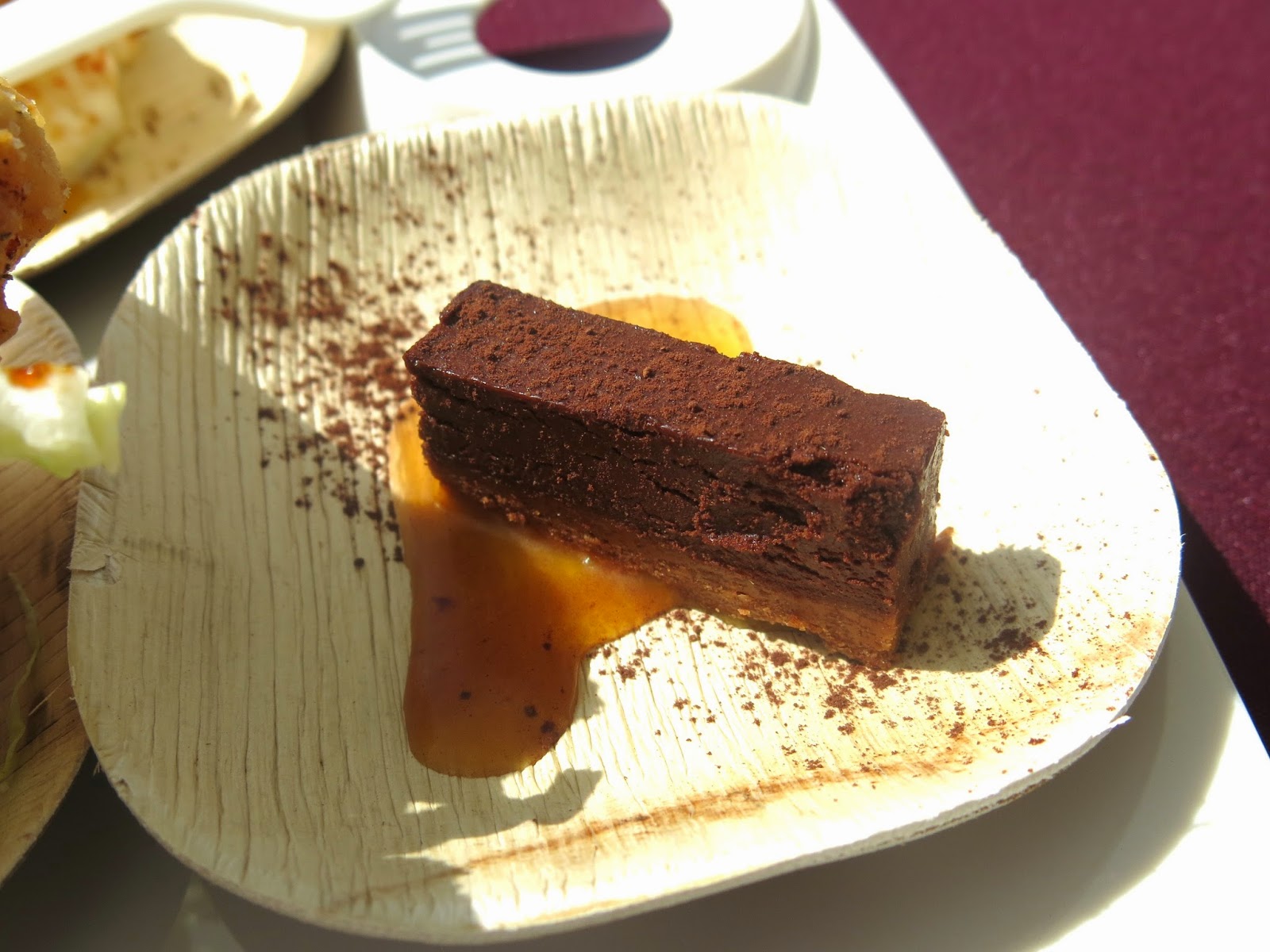 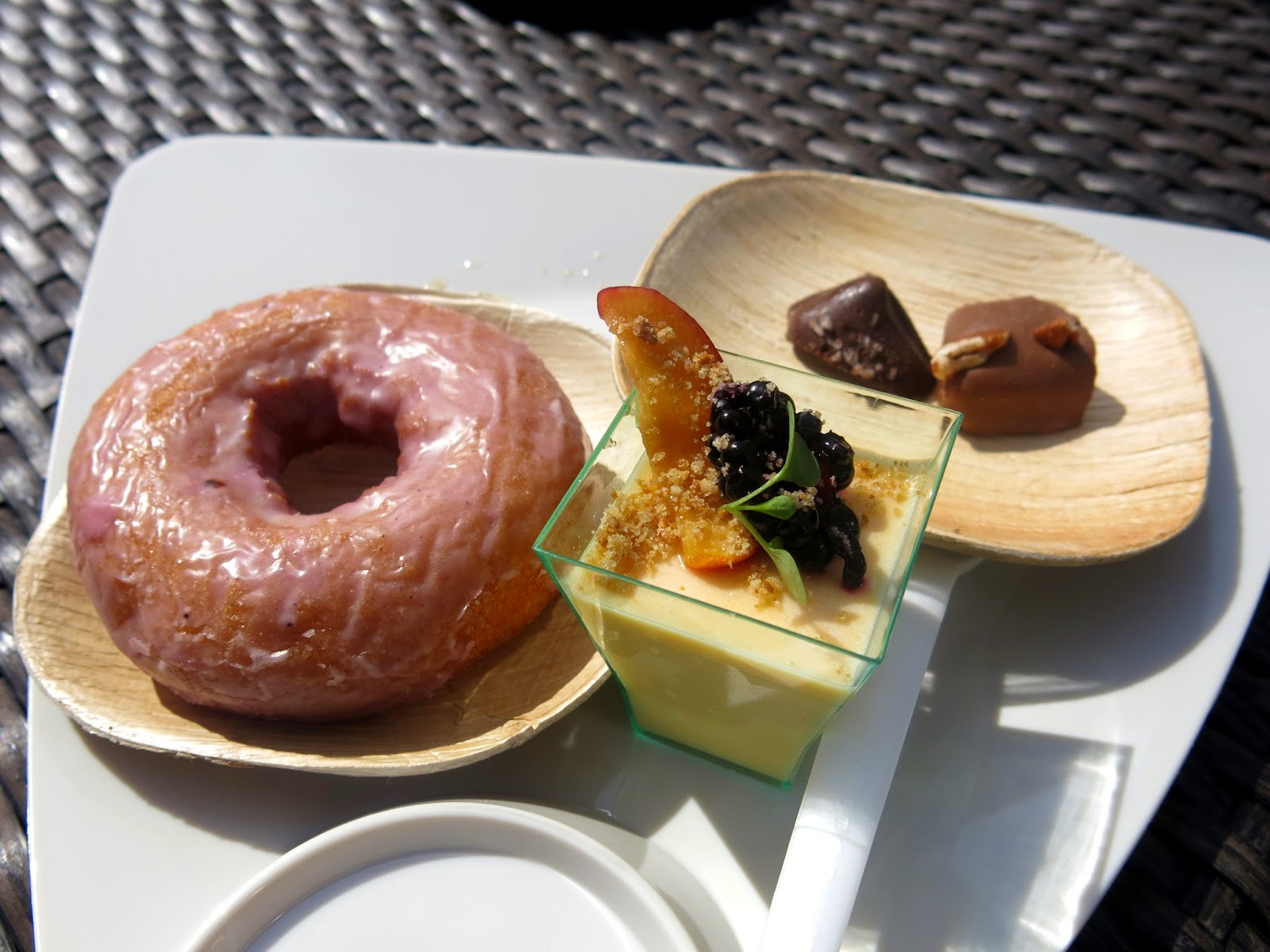 Dessert seemed to have a particular emphasis this year, as Brandy was very pleased to see.  Donuts were at the forefront, with Glazed and Infused bringing a goat cheese and red wine glazed cake donut, Firecakes giving attendees the choice between a vanilla, chocolate, and "almond joy" flavored, custard filled yeast donuts, and Stan's Donuts stealing the spotlight with their Chicago Mix donut, which was topped with caramel corn and filled with a cheddar cream.  "Not sure how I feel about this one," Brandy said, studying the neon orange interior of the pastry, "But it certainly is unique!"  Other sweet favorites included Bistronomic's version of a Kit Kat bar, composed of feuilletine, chocolate hazelnut ganache, and served with orange Grand Marnier sauce and The Langham's pistachio and cherry tart, which was a such an intricate dessert that the station displayed one of the desserts cut in half to show all of the layers inside.  Another major crowd favorite was surprisingly from Francesca's Restaurants, which brought a sweet corn butterscotch bread pudding with blueberries, caramel corn, and vanilla ice cream. 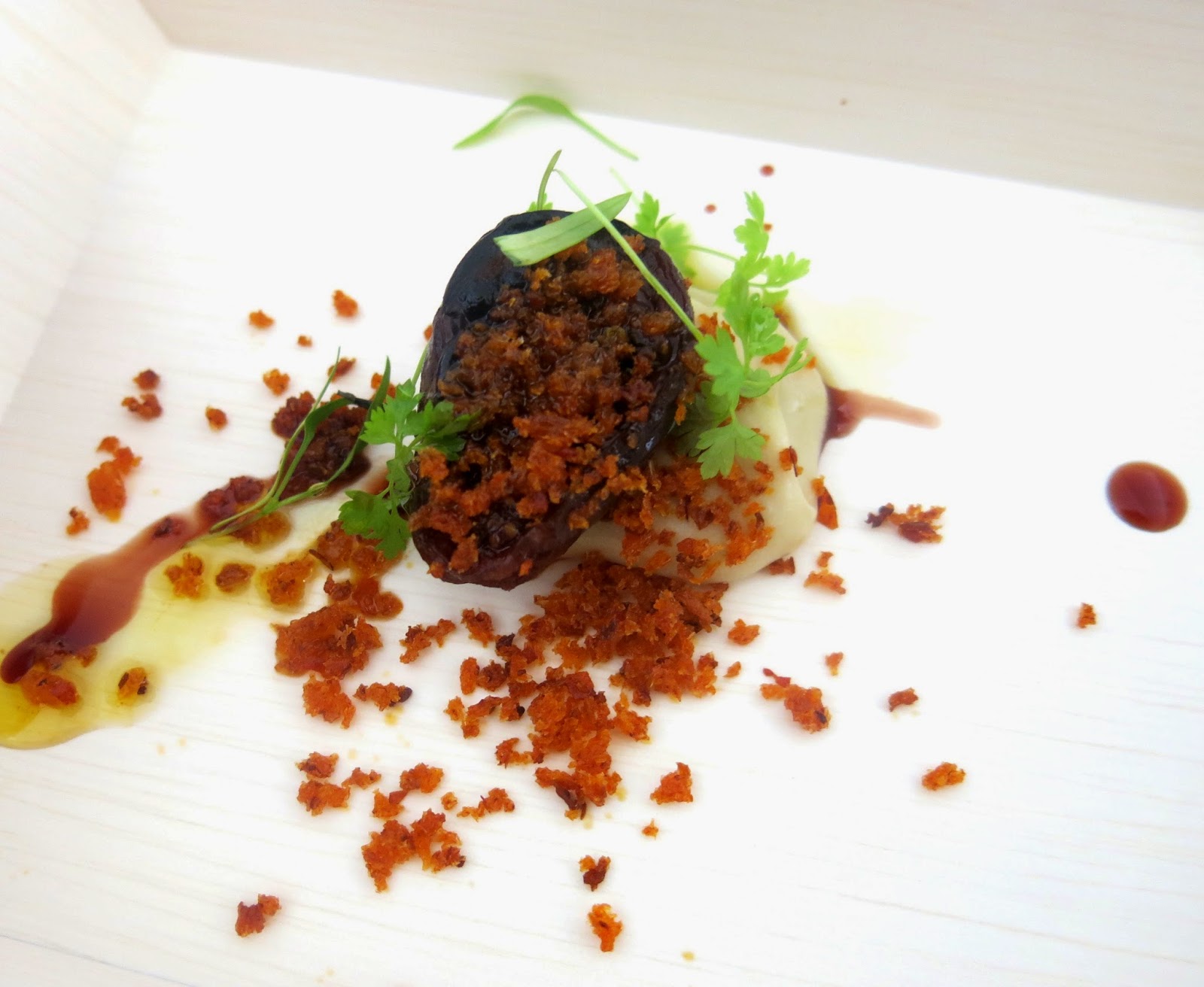 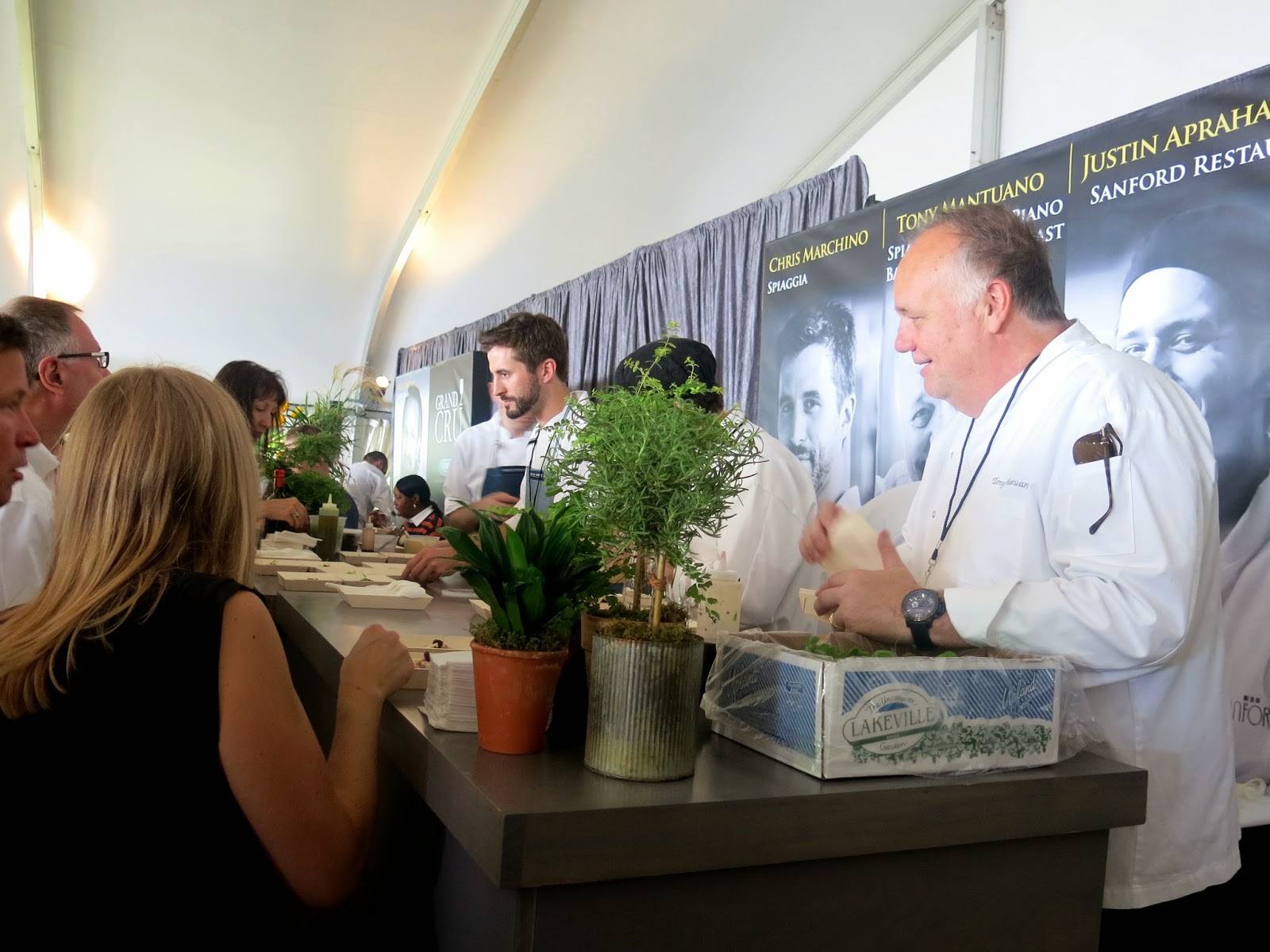 Even though the amount of wine in the main festival was overwhelming as always, Brandy made a major effort to visit the Grand Cru this year, the showcase for international wineries that often invites the best chefs at the festival to create small dishes that pair perfectly with the wine.  While Brandy may not be the most sophisticated wine drinker (she pretty much just worked her way through the lines, holding out her wine glass for a pour, and then moving on) she was pleased to see chefs like Stephanie Izard and Andrew Zimmerman were hurriedly feeding the crowds themselves at the back of the space.  Brandy's favorite among the group were Tony Mantuano and Chris Marchino from Spiaggia, who served pickled black mission figs with Castelmagno cheese, ‘nduja sausage and fennel. 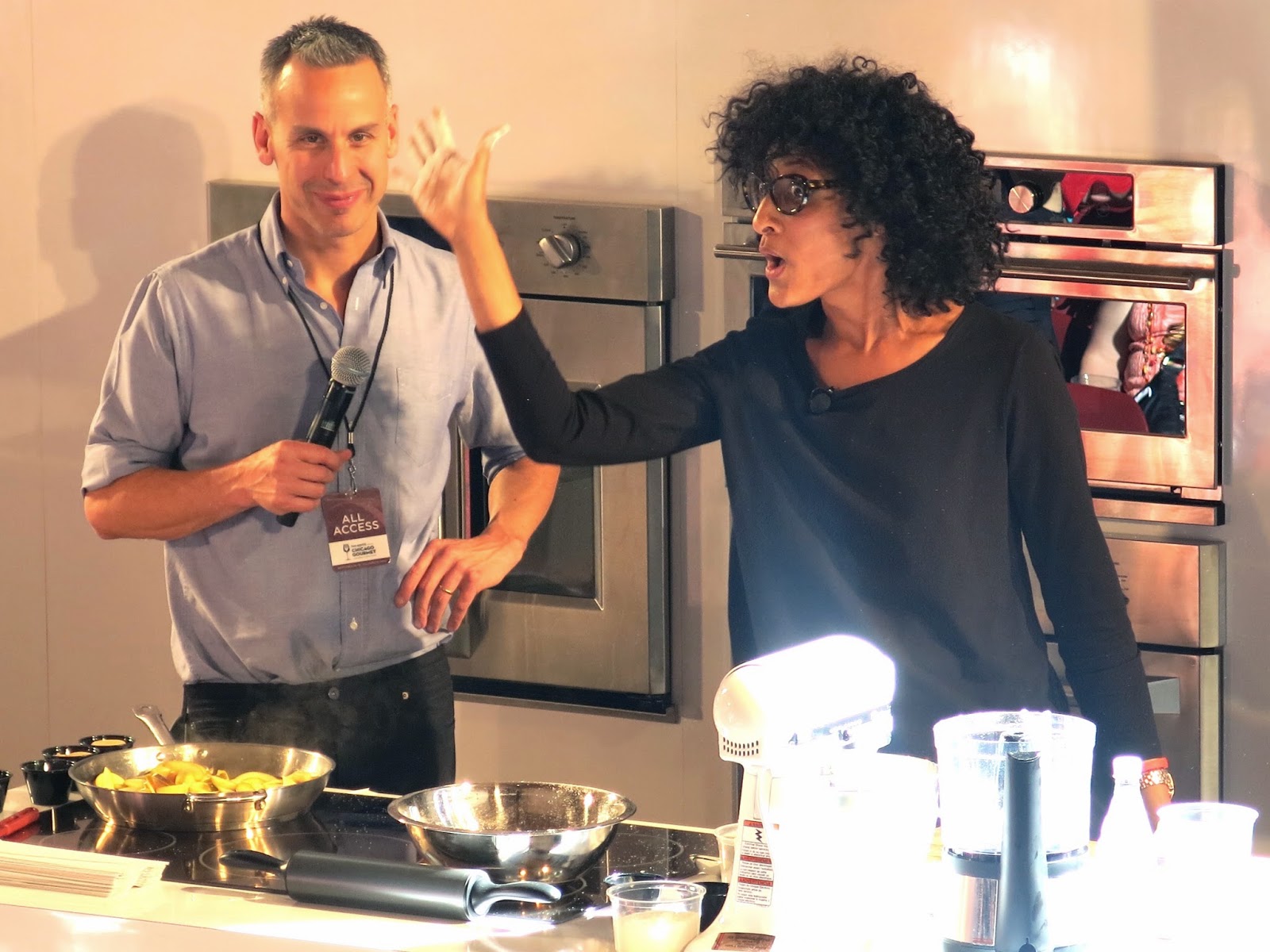 Next, Brandy jumped over the Bon Appetite Mainstage to take in a chef demo or two.  She caught the very end of Iron Chef Masaharu Morimoto's demo, in which he showed off his knife skills by breaking down a gigantic fish (as well as singing) in front of the crowd.  After that, Carla Hall (from Top Chef and The Chew) made a cheddar cheese and apple pie, proving to be just as quirky and lovable live as she is on television.  After that came Jeff Mauro, otherwise known as The Sandwich King, whose comedy training came out while he prepared rustic Italian favorites, even inviting his son to come up and help with the dish's prep. 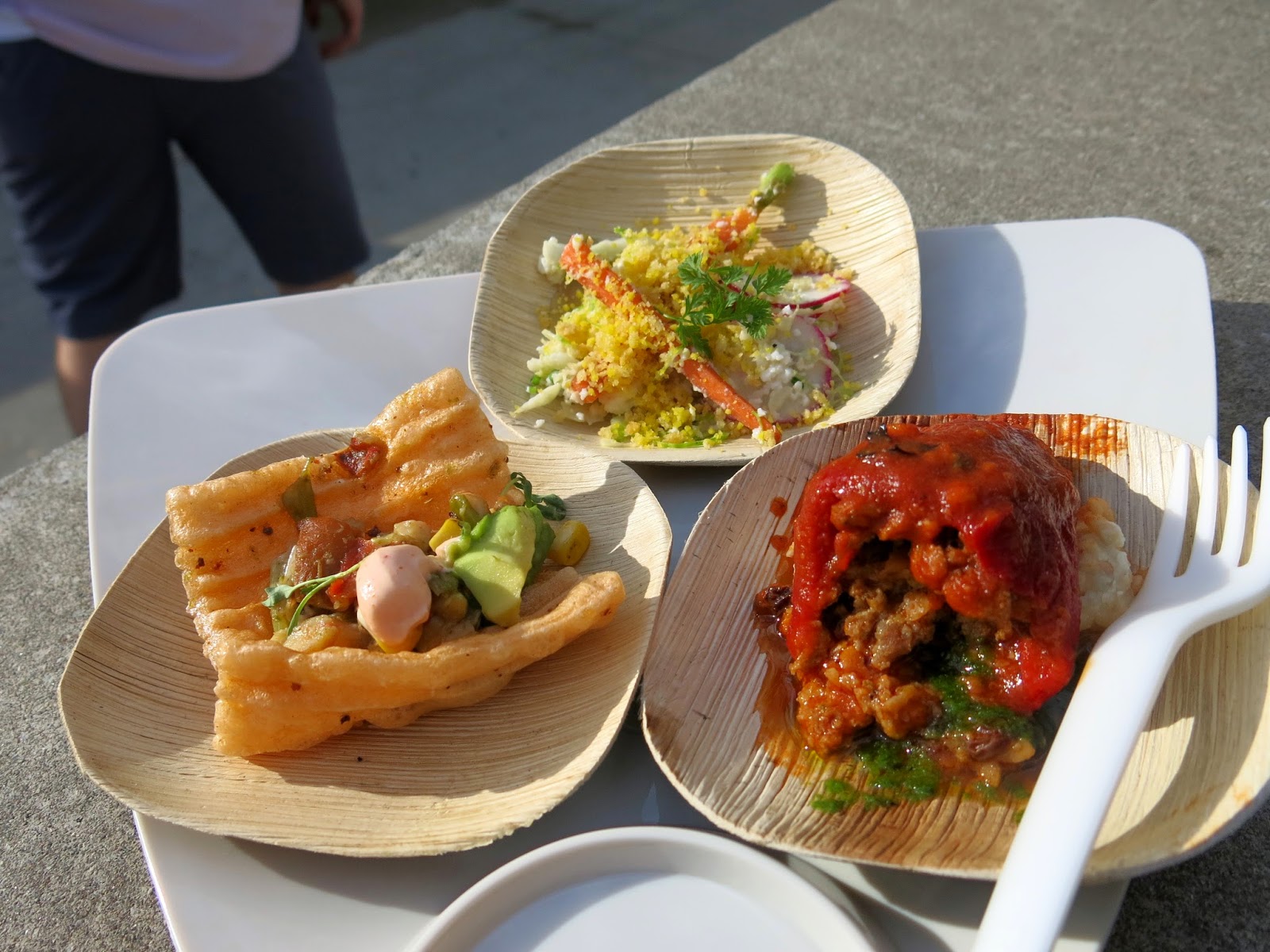 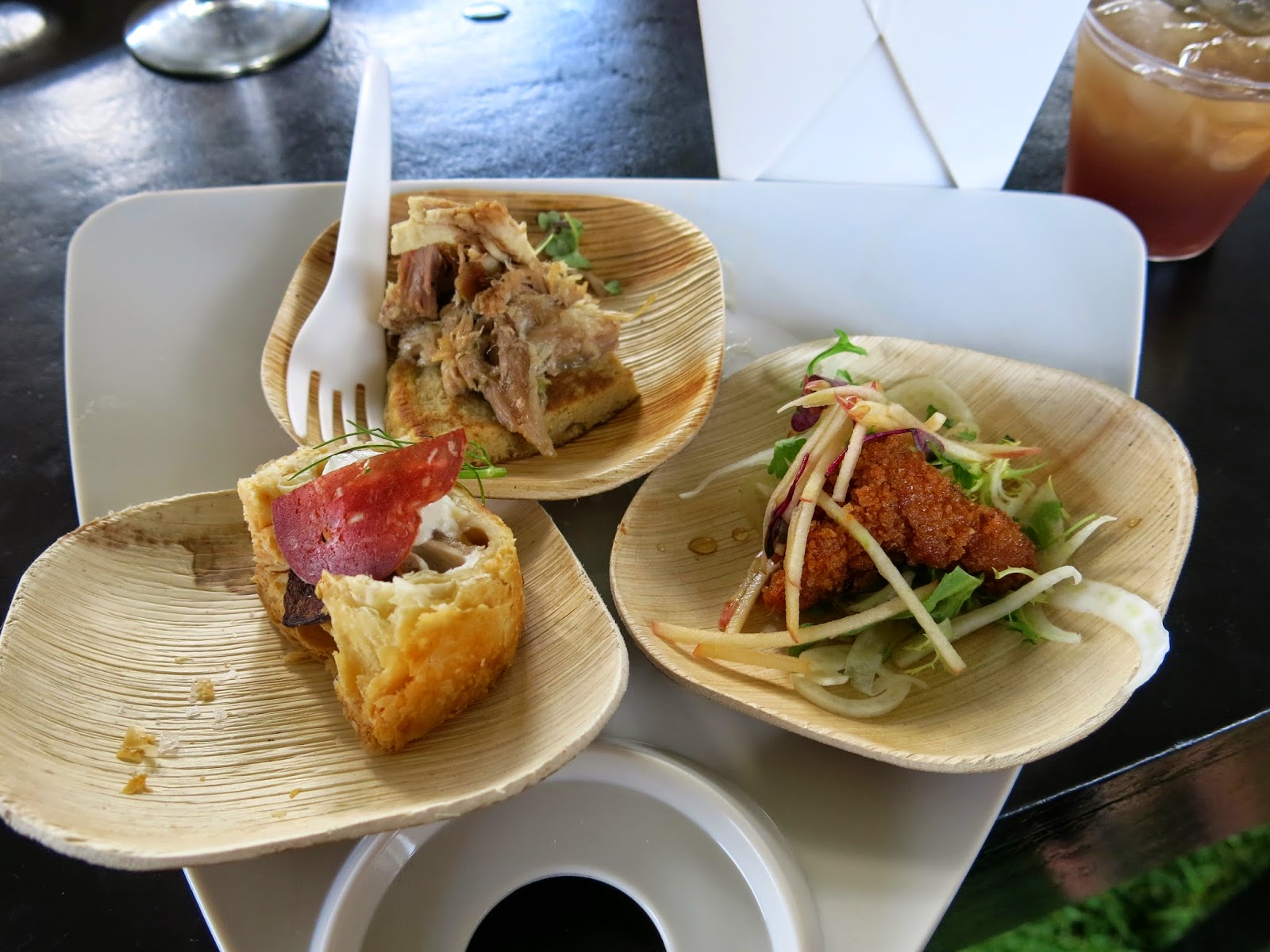 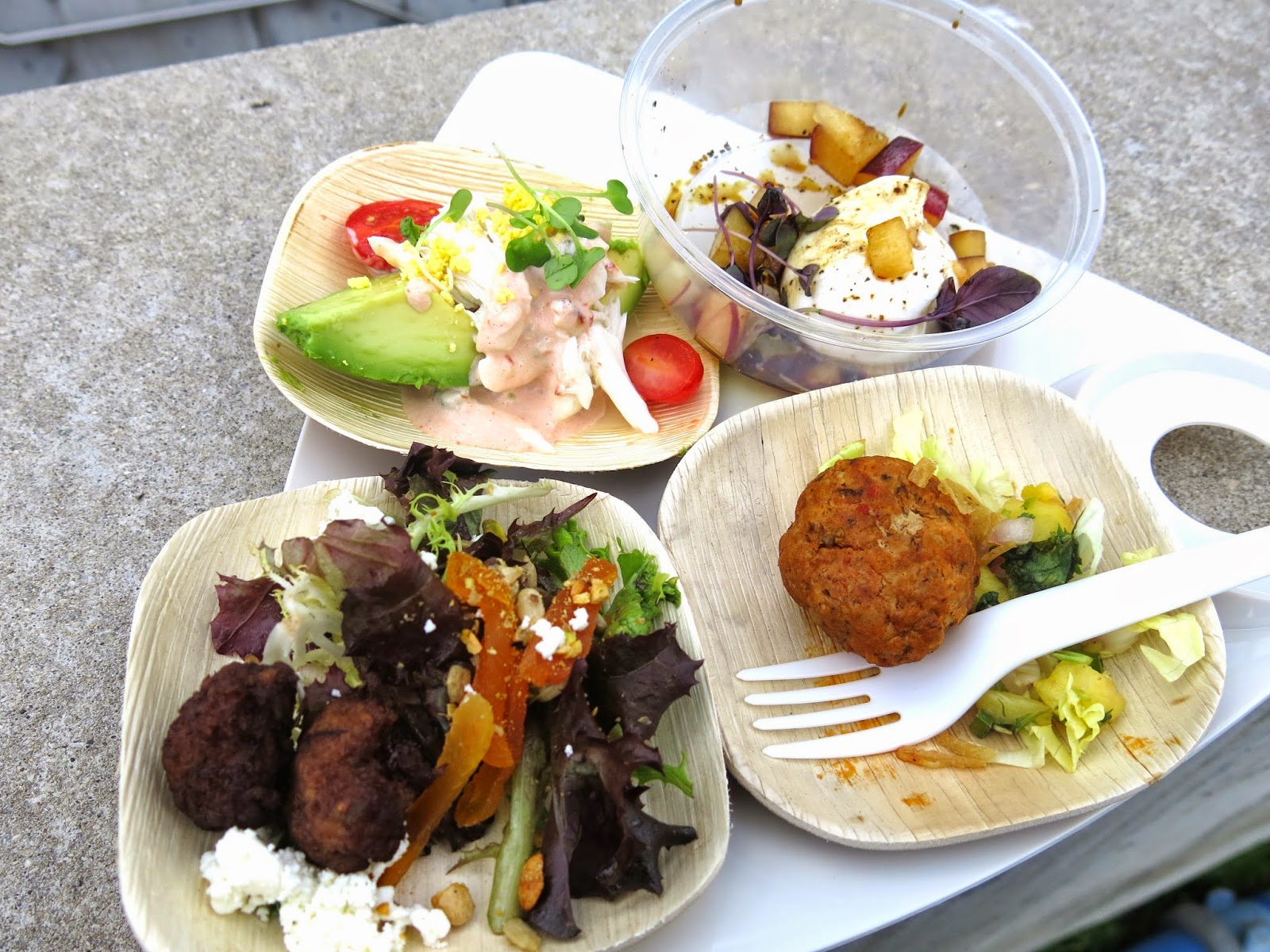 Finally, Brandy took one more turn around the tasting pavilions (and as many of the cocktail tents that would serve her).  Davanti Enoteca smartly pandered to the crowds a little bit by serving the ever so fashionable cheese, burrata, with stone fruits, microgreen basil, and saba and RL Restaurant had a very simple yet classic Crab Louis with avocado.  Three of Brandy's brunch favorites made the list of standouts: ZED451 which brought their signature stuffed pepperdous as well as a steak tartar, Koi had a cold noodle and peanut salad sweetly served in a take out container, and Nana, who had one of the most unique dishes at the festival, which was a fried Mexican pasta topped with a farm raised shrimp (they were so proud of the shrimp, in fact, that they had a live one in a tank at the station and gladly told anyone who would listen about their partnership with The Salty Prawn), avocado, and sweet corn.  720 South Bar and Grill brought a lobster salad on a sweet corn macaroon, which Brandy loved as it straddled the line between sweet and savory.  Lastly, Brandy finished off with a fall vegetable terrine from Café des Architectes at the Sofitel made with red pepper, eggplant, yellow and green zucchini, topped with house-made goat cheese and pepperone.

As per usual, Brandy had to be practically torn away from the gates as the fesitval closed down for the night.  "And now the worst time of the year," Brandy whimpered as she waddled her way to the bus, "The longest possible wait until next's year's Chicago Gourmet Festival."  Brandy may have even started to weep from despair if it wasn't for the fact that she fell into a deep slumber the moment she sat down on the bus, only awaking just in time for her stop when her knitting needles fell from her hands.

Remember to check Bunny and Brandy's Facebook page for even more delectable pictures, and check out this piece from Time Out Chicago, where the writers behind Bunny and Brandy talk about their favorite fall flavors from this year's festival.

The writers of this blog were invited to attend this festival at no charge in exchange for an honest recap of the events.