Grand Tour or It's a Small World After All 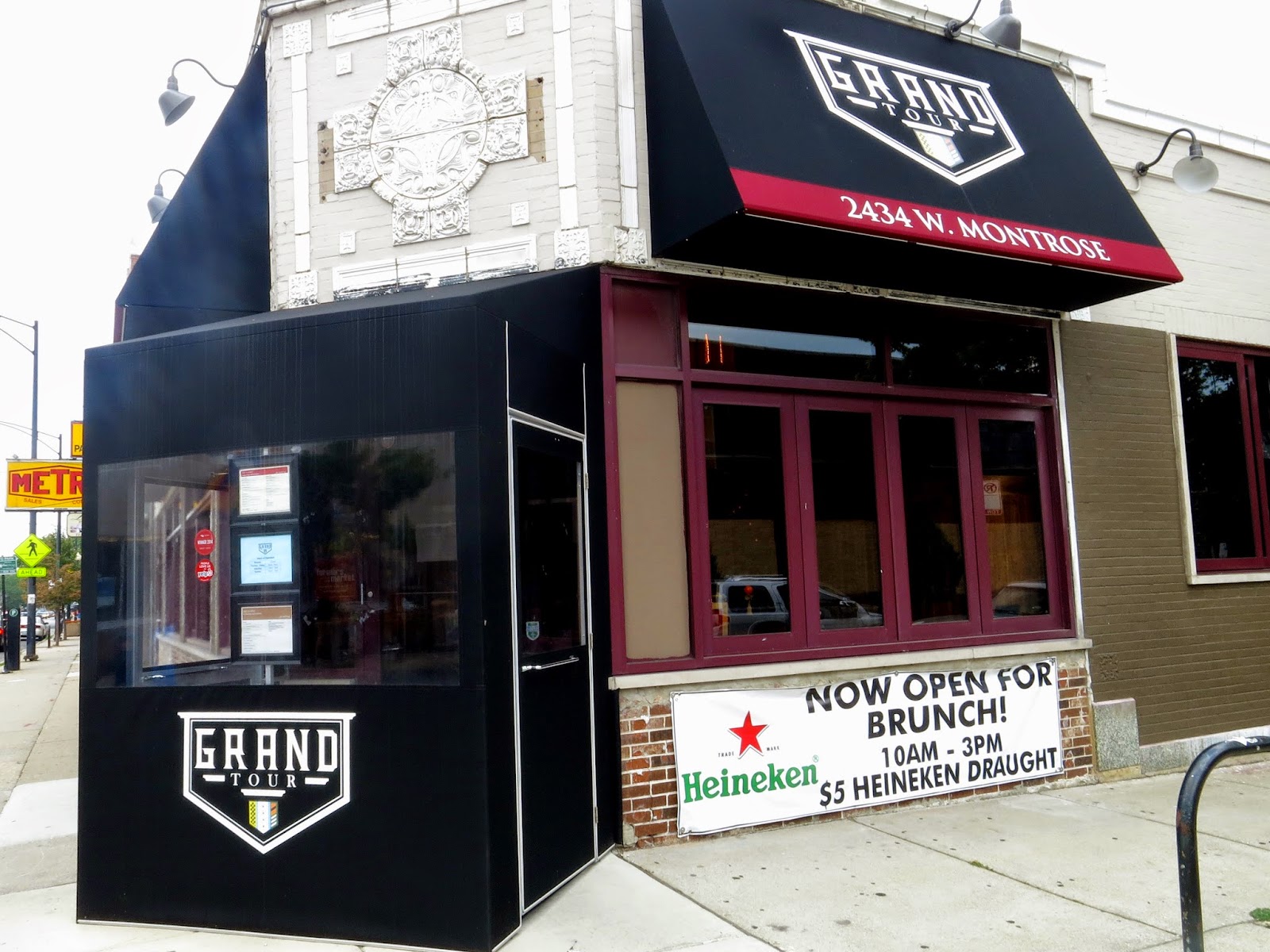 As regular readers of this blog will know, Brandy is quite the well seasoned world traveler.  "I have lived for at least six months on every continent on this planet," she will proclaim, proudly, "And let me tell you, those six months in Antarctica weren't as cold as you might think."  In fact, Brandy isn't quite sure why she decided to settle in Chicago for the time being, but she's been here so long now that only her native land of England can claim to have held her longer."It just seemed like the right time to stop," she says when asked, "I suppose I just started to acquire too many...things, and those things just happen to be best kept in Chicago.  Not that I don't still have a touch of wanderlust, I just like having a place to come home to at the end of the day." 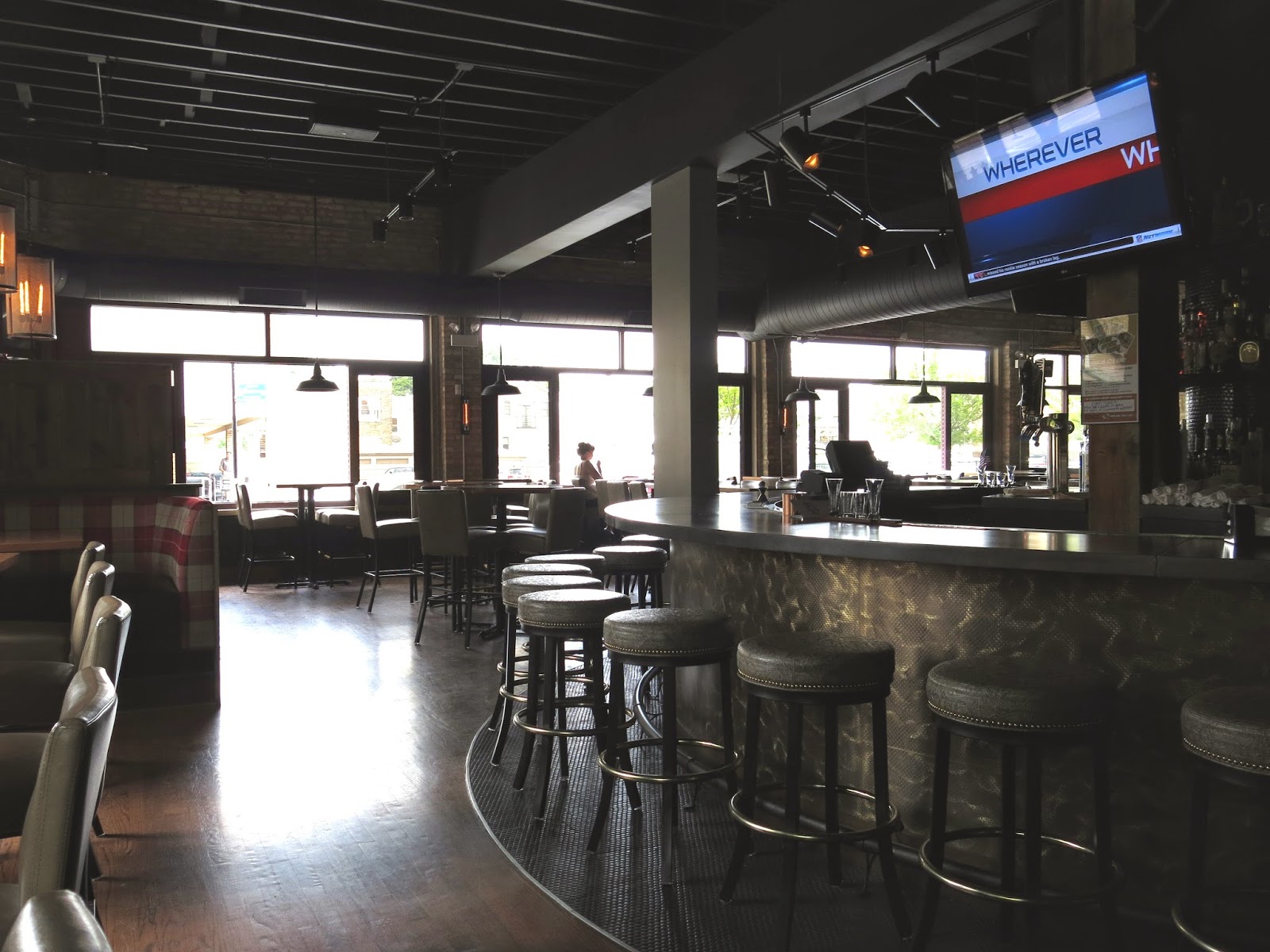 Recently, it came to Brandy's attention that Chef Roger Herring, formally of Socca, had opened a new restaurant in North Center called Grand Tour.  This establishment professed to serve dishes from all around the world, from South American to Europe to Asia.  As Socca was one of Brandy's favorite brunches of all time and with the concept behind this new place being right up her alley, Brandy simply could not wait to visit Grand Tour for herself. 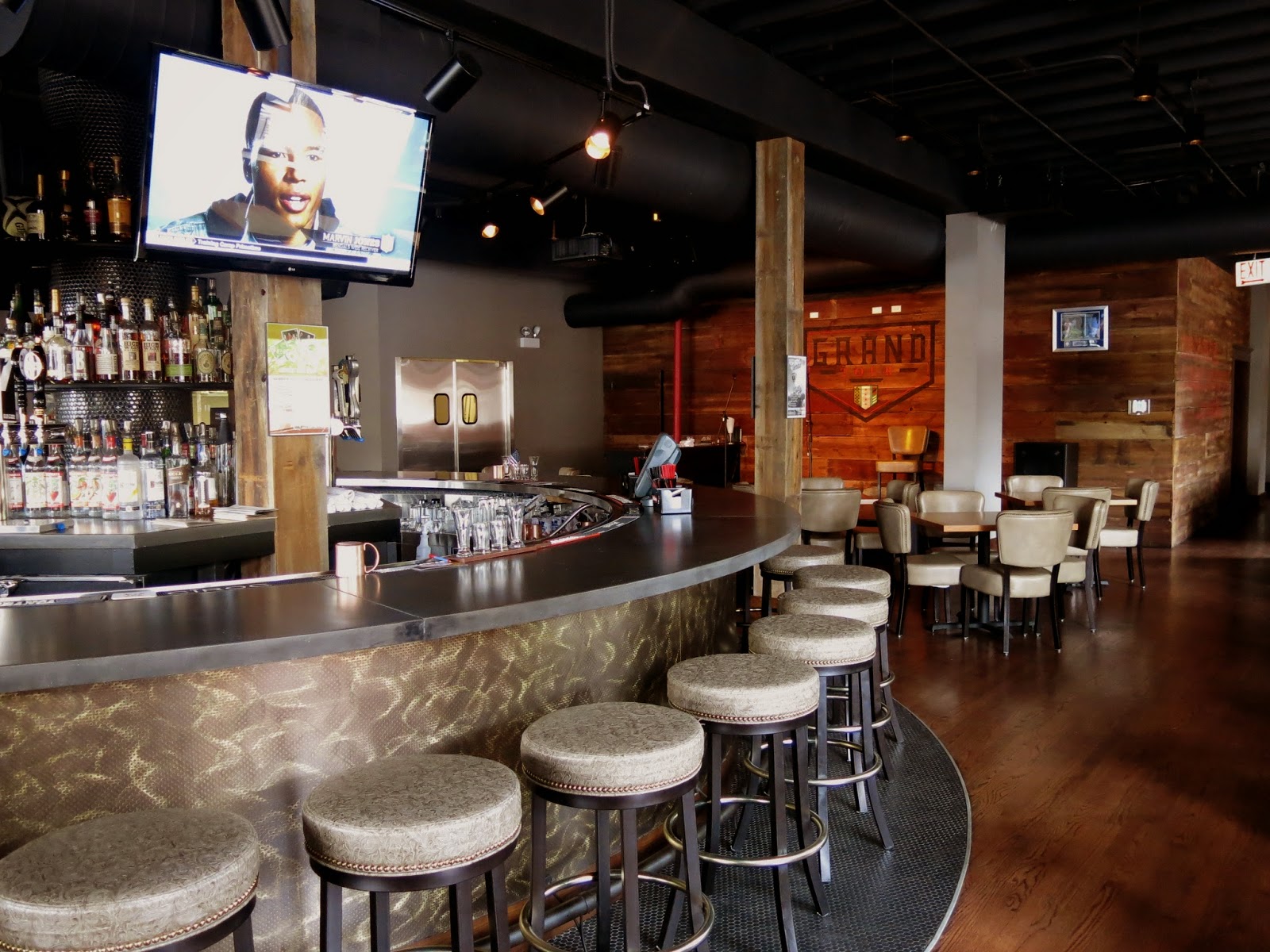 The inside of Grand Tour was quite impressive, in both size and spacing.  A huge circular bar held the focus of the room, which was lined with high tables, booths, and ornate stools to accommodate any sort of desired seating.  At the back of the room was a small, well lit stage, where, presumably, live music could be performed for the room, but currently the large television screens that encircled the bar provided the visual entertainment while piped in classic rock played.  Other than that, the decor was unremarkable and pretty typical for a bar and grill.  "I'd love to see a little more indication of the theme," Brandy mused, looking around the room, "Not necessarily safari helmets and corny props like that, but maybe some subtle hints of world travel would have been nice." 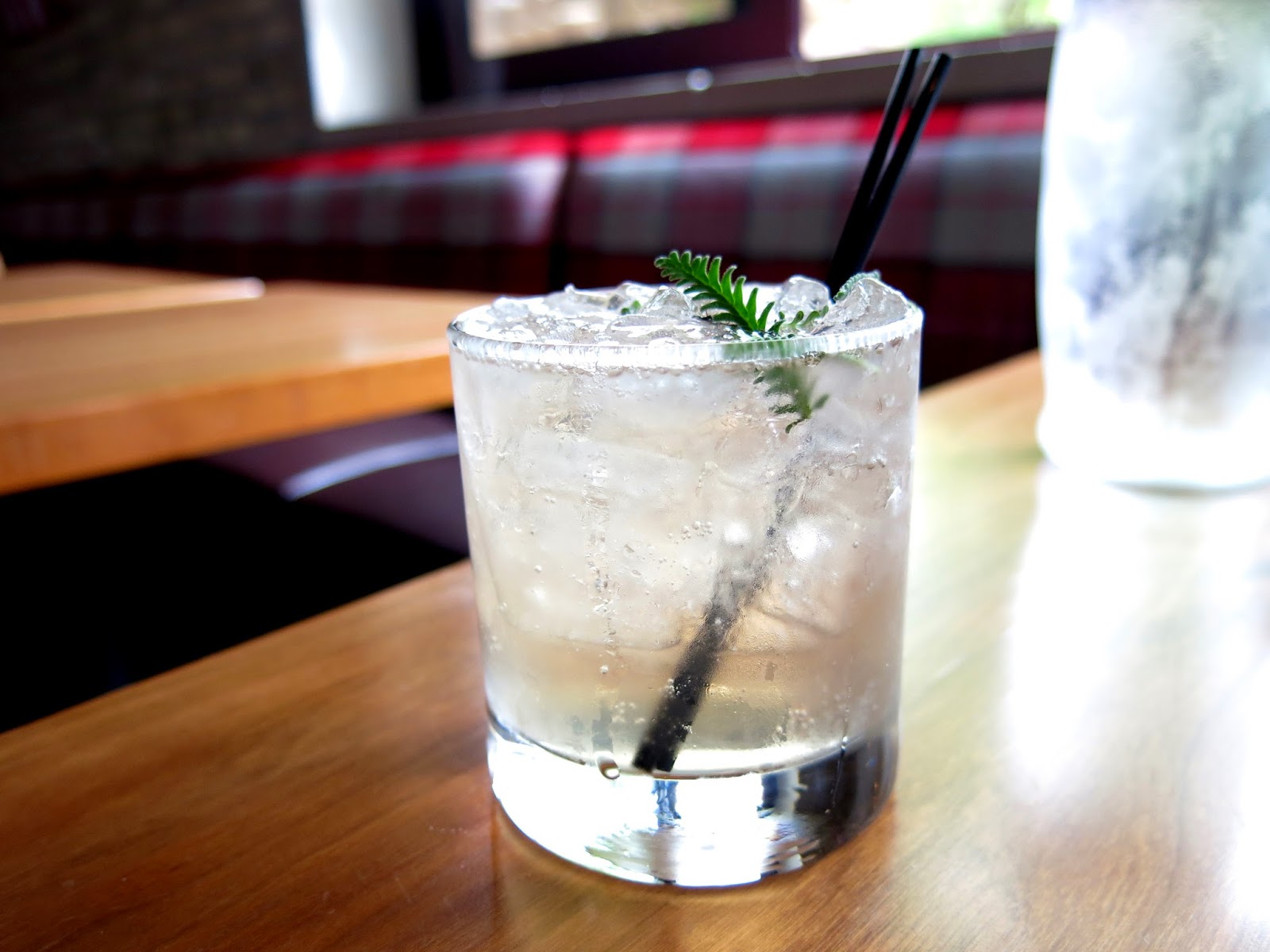 The cheerful waitress happily explained all of the drink specials to Brandy, charming her by letting her know the red sangria wasn't at it's best that day.  "It's a little dry, if you ask me," she said, "But some people like a dryer sangria."  "I'm certainly not one of them," Brandy winked at her.  Brandy opted instead for one of the many interesting sounding cocktails on the front of the drink menu (though it took her several minutes to read the menu, as the one she'd been given was severally water spotted), ordering something called the Weathered Traveler made with white whiskey, blueberry lemoncello, lavendar, soda, and bitters.  The drink was strong without being abrasive, and had a nice refreshing effect.  The lavender did make it a little perfumey, but not unpleasantly so, and Brandy found it a rather nice drink to sip throughout her meal. 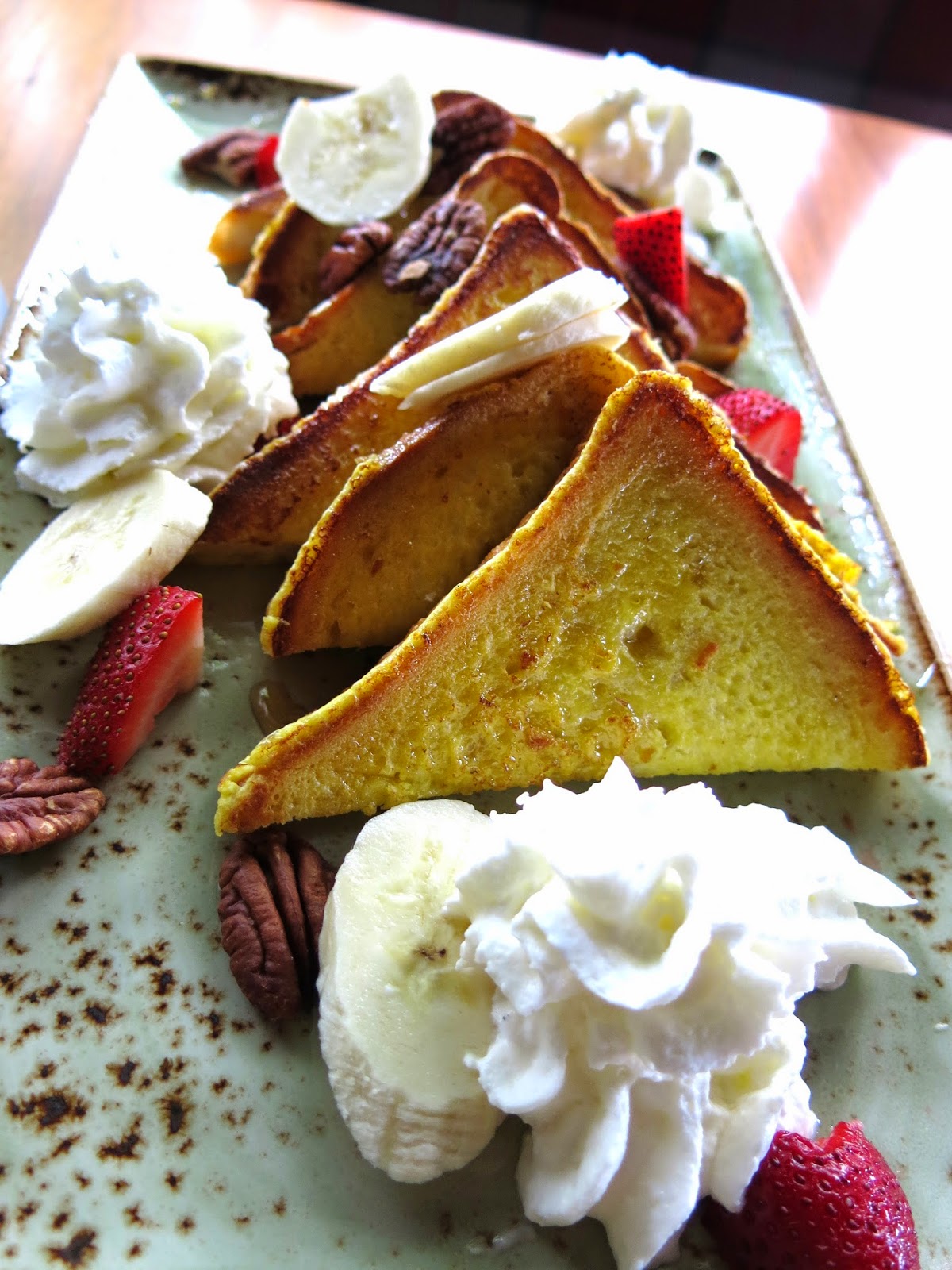 First she started off with the French Toast, which the menu marked as being Canadian inspired.  Brandy supposed the Canadian element was the maple syrup, and in that way, the theme seemed to be a bit tacked on, as the syrup was simply a drizzle on top of the plate.  The French toast itself was pretty standard, being cut into thin triangles and topped with slices of banana, strawberry, and pecans as well as dollops of whipped cream that looked suspiciously like they'd come from a can.  The overall taste wasn't bad at all, but Brandy couldn't help feeling a little disappointed.  "One of my favorite French toasts of all time was at Socca, Roger Herring's old haunt, and in comparison to that dish, this one is just not on the same level," Brandy whimpered, "And especially with an $11 price tag, I'd like to think I'm getting something a little more special than what a greasy spoon diner would give me for half as much." 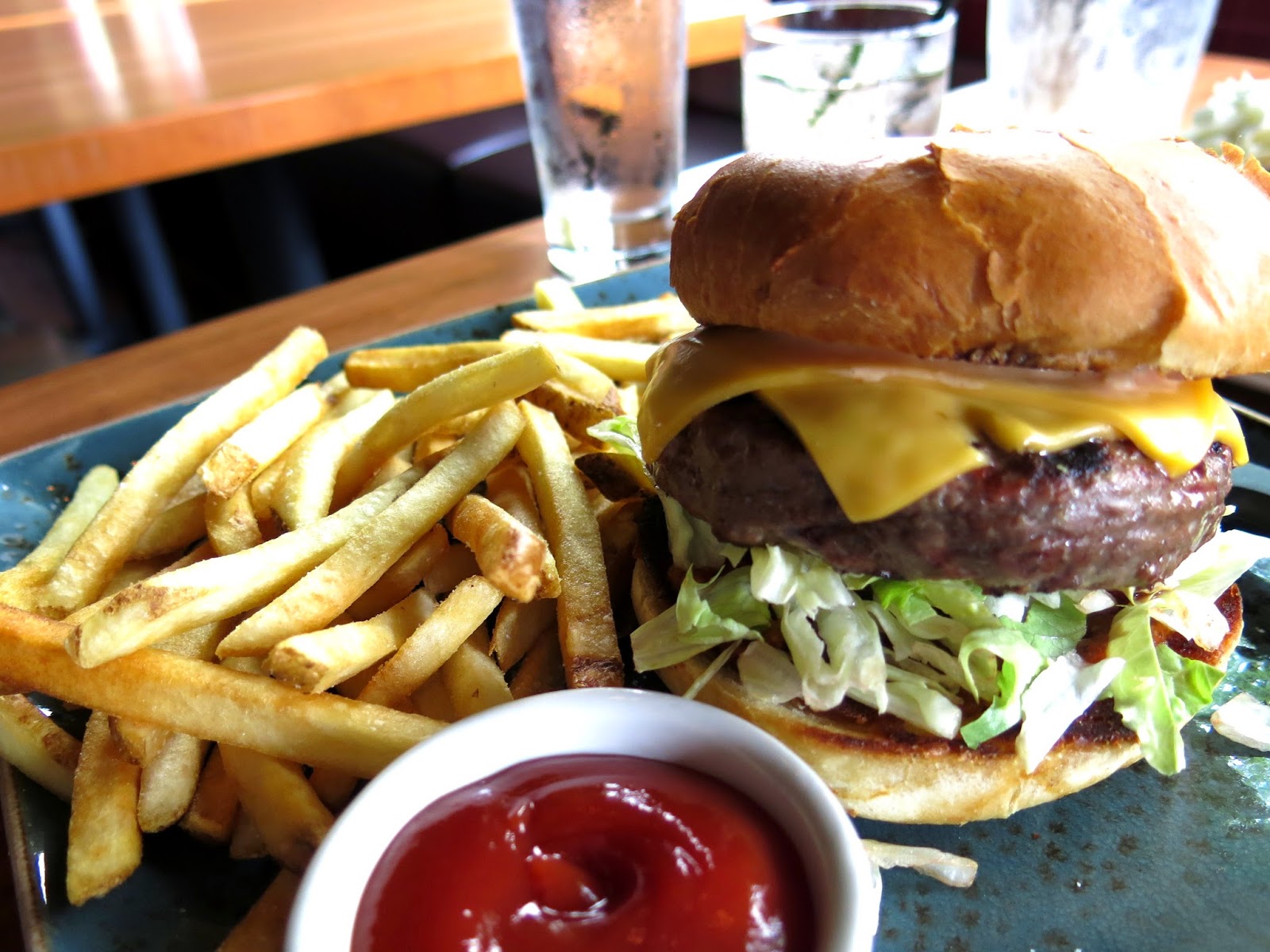 Lastly Brandy ordered the Merica Burger, an homage to perhaps America's most well known fast food favorite.  The burger came topped with American cheese, lettuce, bacon beer jam, and "special sauce" (at this point, even non Americans like Brandy know that "special sauce" probably means Thousand Island dressing with relish) and was served with a side of fries.  The fries were yet another unremarkable part of the meal: under seasoned and probably cooked from frozen, but tasty enough for plate filler.  The burger was actually quite nice: the meat seemed to be a custom blend as the texture was fairly smooth and lean.  Brandy wished for a bit more of either the sauce or the bacon beer jam, as both seemed to fade into the background, though the burger itself provided a nice meaty flavor and the American cheese, as much as foodies like to make fun of it, did lend a nice silky feeling to each mouthful.

Though the service was warm and friendly, the space open and inviting, and the concept intriguing, in the end Brandy felt a bit let down by the food at Grand Tour.  "It's not that anything was bad," she tried to explain to herself as she left, "I was just hoping for a bit more oomph, as they say.  That meal was less a worldly tasting and more a standard American brunch dressed up to look exotic.  Don't get me wrong, there's nothing wrong with an American brunch; it's what I've grown to love these past few years, after all.  But if that's what is on offer, don't try to trick people into thinking there's some grand design behind the menu that's not really there.  Or maybe I'm just still bitter about paying $11 for that damned French toast..." 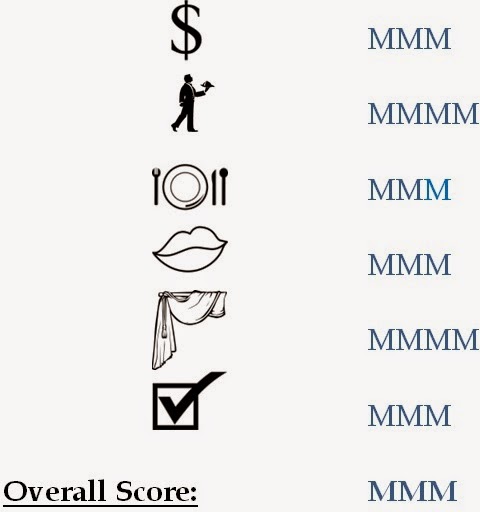