From the Kitchens of Bunny and Brandy: Cook Au Vin 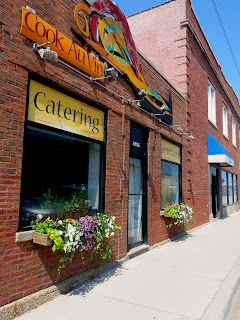 It should be pretty obvious by this point that Brandy would prefer to have someone else make her brunch for her, but on occasion, she does like to do a bit of experimentation in her own kitchen.  Of course, the down side of this is the the dreaded dishes.  "My hands do not do well in soapy liquid," Brandy often says, "Its not my fault, my family has a genetic allergy to house work." 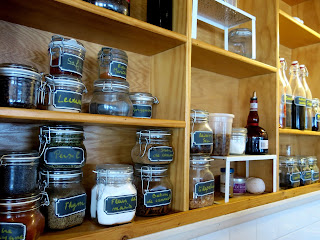 So it was quite the blessing when Brandy discovered the Sunday Brunch Class at Cook Au Vin, a combination bakery, caterer, and host to a range of gourmet French cuisine cooking classes.  This class seemed to offer everything a brunch aficionado could ask for: an intensive walk through of three delectable courses from accomplished chef Vincent Colombet, as well as the chance to enjoy the fruits of a morning's labour with your fellow classmates at the end, and best of all, no dirty dishes to clean up afterwards!  It was truly an opportunity Brandy could not turn down. 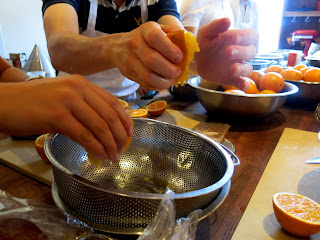 The morning began with the group all pitching in to squeeze some fresh orange juice.  "If you don't want to do much today, you can do this," Chef Vincent told the group.  This turned out to be a great way for the class to get to know one another, as they all gathered to slice citrus and pulverize pulp.  Chef Vincent then started to divvy up the tasks among them, allowing the three courses of the meal to slowly come together. 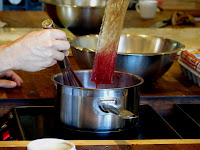 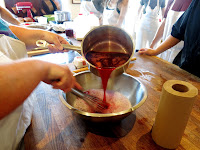 First there was the French Toast with Red Berry Glaze.  Chef Vincent had chosen a thick and sturdy brioche for the bread and had the class dip the 1 inch thick slices into a typical mix of milk and eggs.  The berry glaze was made by boiling a combination of blueberries, blackberries, and raspberries until all the juices began to mingle, then straining out the pulp and adding a little gelatine to thicken the mixture up.  One very brave member of the group took on the task of whisking this concoction together for what seemed like an hour to make sure that the gelatine was well incorporated, but in the end, all the effort provided the group with one of their favorite elements of the meal. 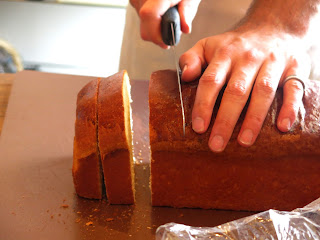 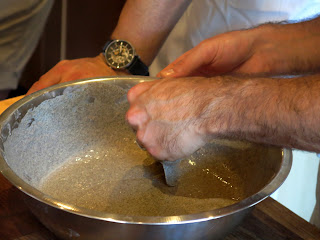 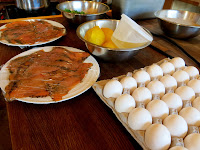 Next was the Buckwheat Crepes, which were to be filled with some smoked salmon and creme fraiche.  When queried on why he prefered buckwheat flour for his savory crepes, Chef Vincent simply shrugged and said, "Because that's how we do it in France," which became his standard response for why he did most things (he was able to get away with this explanation too, as half the class that day turned out to be fellow Frenchmen).  He instructed the group to combine the thin crepe batter by hand, thus insuring a lump free mixture.  These crepes were made to be a little more thick, almost like a bellini, and the buckwheat seemed to make them a little more chewy than their more delicate counterparts, but the earthiness of them paired very well with the thinly sliced salmon and the rich creme fraiche. 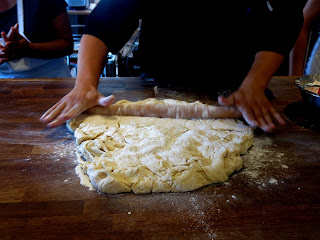 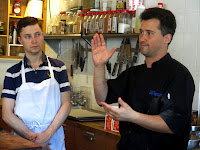 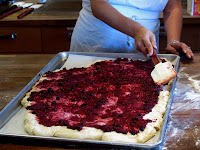 counter.  "It's magic dough," he grinned at them.  When pressed a little further, he cheekily asked them, "Have you heard about Cronuts?"  Brandy was instantly thrown into an almost hypnotic state at the thought.  The infamous Cronut, demonic hybrid of a croissant and a doughnut, thus taking an already decadent, buttery pastry and adding to it's sinfulness by frying it until golden brown.  But Chef Vincent had other plans for his "magic dough."  "We're going to use it instead of English Muffins in the Benedict," he said, causing Brandy to swoon into the crepe batter covered hands of her fellow classmate.  Chef Vincent was then taken by an idea to cover the top of the Cronut dough in the remaining pulp from the red berry glaze before he put the mound into the oven, which was an idea the rest of the class didn't seem too sure about. 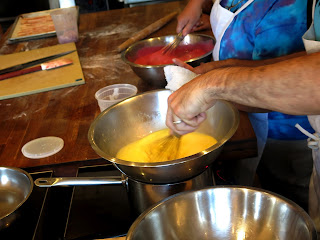 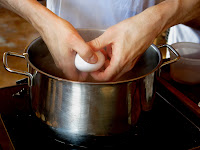 For the main course, Chef Vincent walked the class through the making of the perfect Benedict.  First was the lesson in poaching eggs, which he advised doing in a bath of not only water, but vinegar.  When asked how restaurants always present such flawless looking poached eggs, he took up a pairing knife and simply trimmed the edges of the white to make it look more uniform.  The Hollandaise sauce he infused with a little diced shallot as well as the typical lemon juice and butter, which made for a deeper flavor.  Unfortunately, Chef Vincent found the finished Cronuts to be unacceptable for the Benedict, so he toasted up some country bread as a base instead.  The class, however, decided that the Cronuts were pretty darn delectable and decided to portion them out for the meal anyway, dipping pieces of them into the finish red berry glaze. 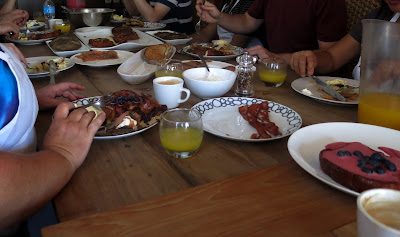 The class then came together to set the table for their meal, bringing over plates laden with French toast, buckwheat crepes, and poached eggs along with a carafe of orange juice and bowls full of the red berry glaze and Hollandaise sauce.  Together they filled up their plates from the family style set up, joining to dine on the products of their morning's work without abandon.  Experienced foodies and amature cooks alike, this rag tag group of new found friends marveled over what they had accomplished together until their stomachs could no longer handle the bounty.

Needless to say, Brandy very much enjoyed her experience at Cook Au Vin and was quick to peruse the list of other classes, which included lessons on pastry making, bread making, and even classes for little chefs in the making.  Ranging from $65 to $150 a class (including getting to eat all ones hard work) seemed a fair enough price for a few hours of friend making, information sharing, and food consuming.  "Now if only I could employ some of those magical dish washing elves that seem to work here, I'd never leave home," Brandy concluded.

*The writers of this blog were invited by Cook Au Vin to take this class free of charge in exchange for an honest review.
Posted by Bunny and Brandy at 10:52 AM