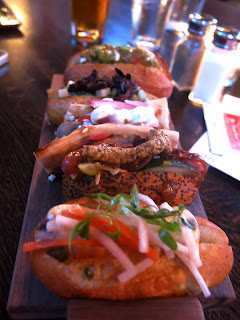 While Brandy has enjoyed many burgers for brunch over the years, she's never really considered that hot dogs might also be a viable option (well, except for that the Brunch Dog at Franks 'N Dawgs, obviously).  But when the good folks at Bull & Bear contacted Brandy with a little proposition that involved a few encased meats, some of Chicago's most colorful neighborhoods, and a national holiday, she decided to make a (second) exception. 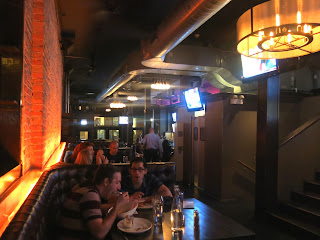 As some foodies in the know might have heard, this past Tuesday was National Hot Dog Day, and to celebrate this most momentous day, Bull & Bear have been offering a selection of five different gourmet hot dogs all week, each one themed after a different Chicago neighborhood.  Diners were also invited to taste all of the creations together in miniature form via the Frank Plank and vote on their favorites.  And as much as Brandy would have liked to attempt the Home Wrecker Challenge (which entailed devouring a 22 inch Vienna Beef dog, dressed in the traditional Chicago style, plus a load of handcut French fries in one sitting, thus gaining the winner a $25 gift certificate, a T-shirt, and a fist full of antiacids), she instead opted to vote for the King of Hot Dogs, enlisting the help of Bailey from The Cider Press to help her choose from the five different candidates. 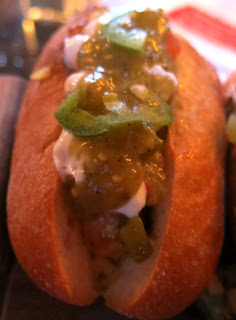 First up was the Pilsen Dog, which had a Mexican flare.  Served on a bolilo roll, the dog itself was made from spiced pork, then topped with a cilantro cream, pineapple and cactus salsa, and sliced jalapeno peppers.  Brandy loved the tangy sweetness of the salsa as well as the cooling power of the herbed cream sauce, which helped to sooth the slow burn from the peppers ("Not quite soothing enough!" choked Bailey, who got one particularly thickly sliced jalapeno). 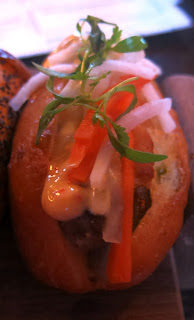 Next was the Uptown, which had more of an Vietnamese slant, drawing inspiration from a traditional  Banh Mi sandwich as well as the warming noodle soup known as Pho.  This time it was a spicy beef sausage, topped with a chili infused mayo and a crispy slaw made from pickled daikon radish and carrots, all served on a jalapeno bun.  This one had too much kick for Brandy's taste, but seemed to suit Bailey just fine (Brandy, always a bit of a delicate flower when it comes to heat, was nearly brought to tears by this dog, but found the sausage so flavorful she couldn't put it down). 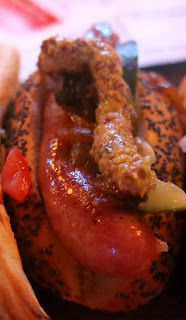 Following that came the Pulaski Dog, a smoked Polish sausage on a poppy seed bun with a crisp house made pickle,  charred onions, and chunky brown mustard.  Both Bailey and Brandy agreed that this was the closest to a traditional hot dog, and that they could have easily eaten the full sized version.  The mustard wasn't overly spicy (which after the first two dogs, came as a relief) and along with the sweetness of the onions, the smokiness of the dog, and the tang of the pickle, the flavors and textures seemed to have been perfectly balanced. 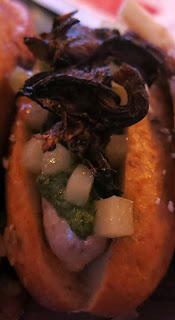 The Little Italy Dog was next, consisting of a salami style sausage, arugula pesto, provolone cheese, and earthy mushrooms on a fennel seed bun.  This one was sadly disappointing for both Brandy and Bailey.  "Its just one of those situations where a bunch of ingredients that sound wonderful end up in a mediocre whole," Brandy sighed.  The fennel seed in the bun was a little too powerful, it seemed, and masked the taste of the pesto, mushrooms, and cheese, but at least the bold meat managed to shine through in the end. 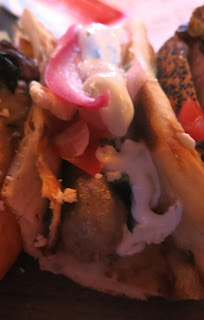 Lastly was the Greek Town Dog, made from a lamb sausage on a sheet of pita bread and topped with tomatoes, pickled red onion, feta cheese, and tzatziki sauce.  Brandy simply adored this dog, which had a smooth, velvety texture to the meat, as well as a wonderful richness from the tzatziki.  Bailey lamented the lack of spices in this one and felt the sauce Brandy so loved was over powering the rest of the toppings a bit. Brandy did agree that this one needed something crisp to round it out, but still really enjoyed the traditional Greek flavors. 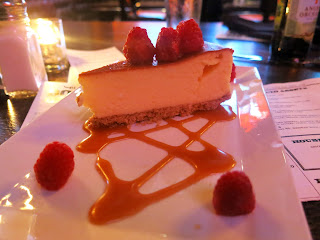 After so much meat, Brandy and Bailey decided to round off their meal with a little slice of Cheesecake, which had a non-traditional salty pretzel crust and came served with caramel sauce and raspberries.  As we all know by now, Brandy can hardly resist a salty/sweet combo, and this dish didn't let down on either front.

Both ladies continued to debate their favorites to the bitter end.  Brandy preferred the sweet/tangy Pilsen and the rich Greek Town, while Bailey sided with the crisp Uptown and the traditional Pulaski.  Luckily, Hot Dog Week at Bull & Bear is not yet over, so if any of our readers would like to judge for themselves, we would love to gather some more opinions on which one is truly the King of Hot Dogs!