Shaw's Crab House or A Sea of Choices 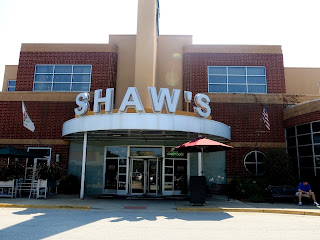 Variety might be the spice of life, but there can be such a thing as too much choice.  On a recent trip to a high end grocery store, Brandy was utterly amazed to find herself in the condiment isle, starring up a rows and rows of shelves, stocked with hundreds of vinegars, oils, jams, jellies, and other exotic and unidentifiable jars and bottles.  So overwhelmed was she that she ended up filling her basket with anything and everything until it became so heavy that a shop attendant had to carry it to the front for her.  "This is why I should not be trusted with so much variety," she told the clerk at the checkout counter, "I have a problem making choices when everything looks so delicious!" 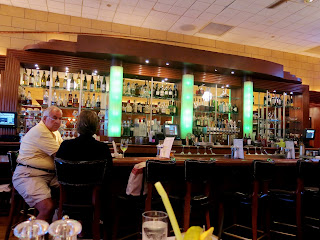 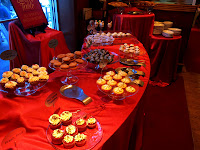 Perhaps this is why Brandy has usually steered clear of the brunch buffet.  There have been a few of course, some amazing and some not so much, but in general the abundance of foods on offer tends to overwhelm her senses and she ends up with a plate so full that even a squadron of competitive eaters would think twice before tackling it.  Perhaps this is why Brandy decided to enlist the help of Bailey Blue when she was invited to tackle the leviathan that is the all-you-can-eat-brunch buffet at Shaw's Crab House in Schaumberg.  "I have two jobs for you," Brandy told her, "One is to drive us there, as I am currently in the middle of an on-going feud with the Illinois DMV," (we won't go into details, but Brandy seems to think driving without her glasses on to reduce glare is acceptable, while the DMV does not), "And two is to keep me from eating so much that crabs are put on the endangered species list."  "I will do both to the best of my ability," Bailey said, cheerfully. 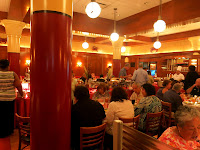 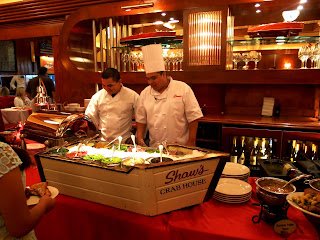 Shaw's is a slightly massive complex housing three main dining areas: the oyster bar, the lounge, and the dining room.  Each space had its own flare (the oyster bar seemed almost 50's diner like in its design, where as the lounge and dining room had more of a super club feel), yet they all seemed to go together quite nicely.  Brandy and Bailey were given a large booth in the lounge, over looking the bar ("My favorite kind of view," Brandy grinned).  A vibrant young woman approached their table straight away with water and quickly explained the layout of the buffet: the oyster bar played host to all things cold, the dining room featured the hot buffet and the chef's table, and the lounge was home to the coveted dessert table. 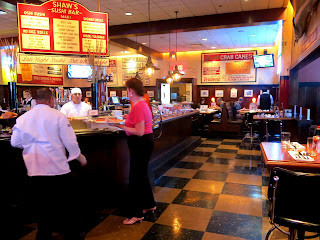 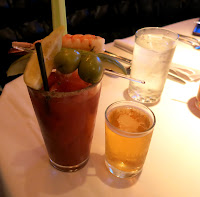 To start off the morning, Bailey ordered up a house Bloody Mary, which came with a few choice veggies, a cocktail shrimp, and a beer back.  Bailey remarked that the mix was quite good with an excellent balance between the acidic tomato and the pungent spices.  "A few more of these and I won't need to visit the buffet!" she laughed. 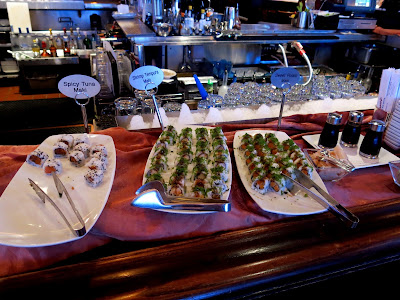 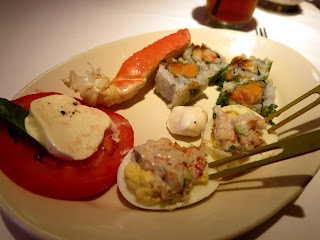 After a quick strategy meeting, Bailey and Brandy decided to make their first trips up for goodies from the oyster bar.  There certainly was a lot of vibrant and delicious looking options to choose from, like several salads, home made rolls and breads, shrimp, oysters, and even sushi.  Bailey singled out the Spicy Tuna roll, which she thought was fresh and perfectly made, while Brandy preferred the Shrimp Tempura roll for the same reasons.  They both absolutely loved the Sweet Potato roll, which had a good hit of both sweetness and saltiness.  The other standout from the cold stuffs were the Seafood Deviled Eggs.  Though a little more like a hard boiled egg with a seafood salad topping, these little devils were creamy, slightly sweet, and very rich.  Brandy also had to try one of the signature crab legs (managing not to kill any fellow patrons with flying bits of shell shrapnel in the process) and found it incredibly sweet, tender, and delicate. 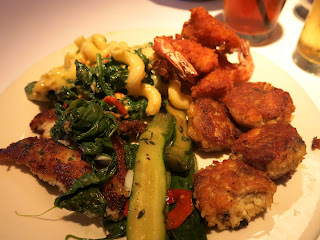 Next was the hot bar, where terrines had been loaded with delicacies like Parmesan Encrusted Halibut, Lobster Mac and Cheese, and Maryland Style Crab Cakes.  The adorable bite sized crab cakes had a rich, buttery flavor, though not as much of a crunch as Brandy would have liked.  The halibut too was buttery and extremely tender with a good thick crust.  Both ladies fawned over the decedent Lobster Mac and Cheese, which had been coated in a creamy brie sauce.  The other surprise favorite was the Fried Shrimp, which were so simple but done so well that it was hard not to love them. 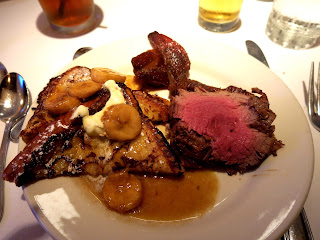 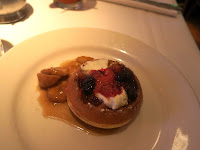 Now finding it increasingly harder to leave their comfortable booth, the next stop was the Chef's Table, housing waffles, French Toast, a plethora of home made jams and sauces, a make your own omelette station, and freshly carved Beef Tenderloin.  Bailey, who was quickly filling up because of her Bloody Mary, chose a simple little waffle, decked out in fresh berries and a Bananas Foster sauce, which she reported with a moan was like, "Heaven in my mouth."  Brandy went with the slightly lighter French Toast, some Brown Sugar Bacon, and a good slice of the beef.  The tenderloin was very supple and cooked to perfection, but the meat Brandy really loved was the bacon, as it had been baked rather than fried, and the sugar had given it a brilliant crunchy crust as well as a nice chew. 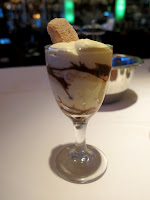 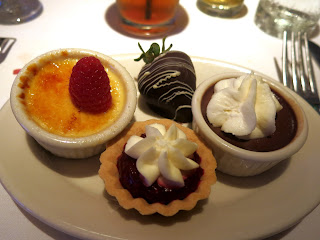 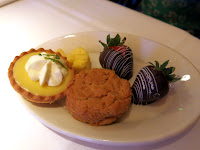 Lastly came the desserts, which even though they were full to the brim already, Bailey and Brandy just could not pass up.  Bailey found two of her all time favorites on the table, Mini Key Lime Pies and Chocolate Covered Strawberries.  Like most of the things on offer at Shaw's, these two classics were simple, but done so well that it made one remember a time before overly ambitious chefs decided collectively to spin every dish they prepared.  Brandy went with a trio of creamy treats: the Pot du Creme, the Creme Brulee, and the Chocolate Strata.  The Pot du Creme was a real surprise, as it had an almost coffee like flavor to it rather than a straight chocolate.  Brandy really loved the Chocolate Strata, which had layered thick vanilla cream with rich chocolate sauce and was dotted with crisp chocolate covered puffed rice pieces.

After a lot of moaning and groaning to get out of the booth, Bailey and Brandy were finally able to make their way to the door, quite pleased with their morning of gorging.  Though the price tag for this meal was a bit hefty ($48 a person for the buffet, not including drinks, tax, or gratuity), it was certainly possible to eat enough food to make up for it, especially with how high quality everything was.  "Well, I think there's only one thing we will be capable of doing this afternoon," Brandy said as they waddled to the car.  And with that, they were off to IKEA to test out all of the model beds.

*The writers of this blog were invited by Shaw's Crab House to try the buffet at no cost in return for an honest review. 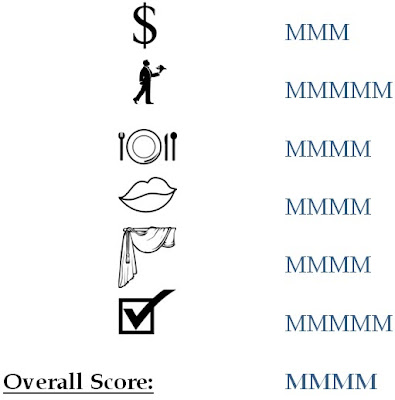