Postcards from Bunny: Under the Table 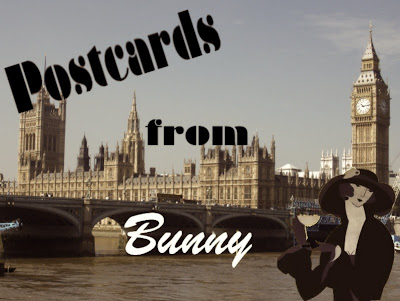 Of Our Two Ladies, it should be quite obvious that Bunny has always been the one with her ear to the ground of what is fashionable ("I don't follow fashion, I make it," as Brandy likes to say).  So when Bunny caught wind that a new pop-up restaurant called Under the Table was opening up in Evanston, she begged Brandy to attend.

"You simply must go!"  Bunny told her, "Pop up restaurants are all the rage!"
"What the bloody hell is a pop up restaurant?" Brandy inquired.
"Don't you know?  Its where a group of chefs hire a temporary staff for a temporary space, make up temporary menus, and sell tickets to the event.  Its marvelous!"
"Sounds a bit flaky to me."
"Not at all.  Its how young chefs these days gain exposure for their food without huge overhead costs while also refining their cuisine and focus grouping their concepts."
"Bunny, have you been watching those fancy cooking shows again?
"Its the only English channel our satellite TV will pick up in Indonesia.  In any case, you are going."
And so Brandy did indeed set off for her first pop up experience. 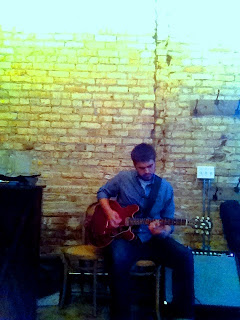 Under the Table was started by childhood friends Max Mora, Anthony Scardino, and Chikoo Patel with the idea of putting a modernist twist on traditional fine dining.  The event was attended by about 15 other patrons and hosted in a small space at 1307 Chicago Ave.  Though the room wasn't customizable to the owner's liking (there wasn't much to do about the art that had been bolted to the walls or the painfully eclectic chandelier), the atmosphere was set by use of a very talented jazz guitarist, providing live music all throughout the dinner. 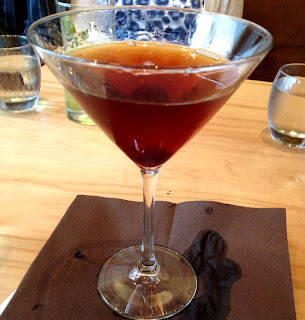 The cocktail and wine list was impressive to say the least, and quite extensive for such a small operation.  The diners seemed to favor the original cocktails by mixologist Josh Novy, who took three very classic drinks and put his own personal spin on them.  "I don't serve cocktails that aren't my own recipe," he proudly declared, and indeed his impressively layered Sidecar and mint infused Pina Colada were most definitely original.  Brandy favored the Smokey Manhattan, in which the cocktail glass was infused with cedar wood smoke before being filled with spirits, making for an incredibly smooth and easily drinkable experience, as well as an rather impressive presentation. 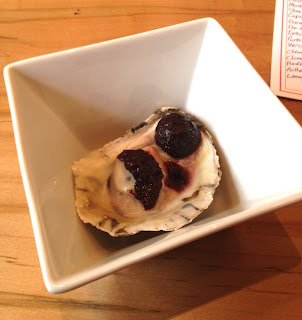 The first course of the night was an Oyster Shooter with some marinated black cherries.  Brandy felt that the slight tartness of the cherries mingled well with the briny oyster and that the textures matched very well, making for a clean, fresh start to the meal. 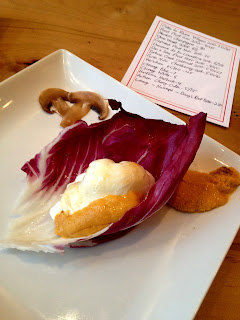 Next came the Salad, a freshly made buratta cheese served with uni, mushrooms, and radicchio.  Brandy was more than a little sceptical of this mix, but really quite enjoyed the richness of the creamy cheese, the savory uni, and the bitter crispness of the radicchio.  Again, though quite rich, the flavors were light and refreshing. 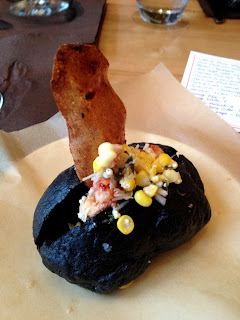 The best presentation probably came from the third course, a Lobster Roll with Mexican sweet corn and a crisp potato chip, served on a roll infused with charcoal powder, making the bread pitch black.  The lobster itself was amazingly soft and tender, while the corn provided a good punch of salt and an almost butter-nut like flavor.  The unusual roll had a deep, earthy flavor that Brandy rather enjoyed, but its density seemed to over whelm the filing. 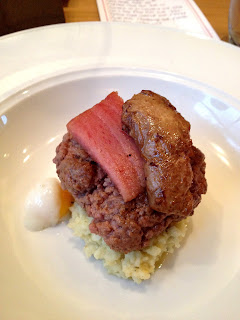 Next was the Prime Beef Slider, which came with a maple glazed piece of "spam," foie gras, a soft cooked quail egg, and a bed of blue cheese grits.  Surprisingly, the spam seemed to be the favorite element amongst the crowd, as it added a good cutting sweetness to the rest of the dish.  The foie was beautifully rich and velvety and the grits were nicely textured, but the beef, though of a wonderful quality, seemed to be overshadowed by the rest of the components, and the quail egg simply became an afterthought. 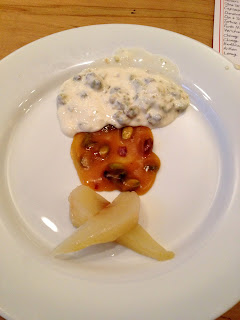 Lastly was the dessert course, a Pistachio Panna Cotta with a medallion of rich caramel and some lavender poached pears.  The panna cotta itself seemed a but soupy and bland, but the caramel was absolutely brilliant, its silky, buttery flavor blending well with the fresh, soft bits of pear and the crunchy nuts.
Brandy was most interested to learn that Under the Table is not only planning more dinners in the future, but also brunches, which she is in full support of.  The hopes for the owners are that they can eventually find a space that will allow them to not only continue their culinary exploration, but also collaborate with local artists and musicians to make a true feast for all the senses.  Diners interesting in attending future Under the Table events can submit their email addresses via their website in order to be alerted when tickets go on sale.

"So?" Bunny inquired of Brandy, "How was it?"
"It was lovely, but I was a little disappointed."
"Really?  Why is that?"
"They didn't serve a single pop-over."
It was a moment before Bunny responded.  "Its called a POP UP restaurant, dear."

*The writers of this blog were invited to dine by the owners of Under the Table at no cost in exchange for an honest review.
Posted by Bunny and Brandy at 10:33 AM

Email ThisBlogThis!Share to TwitterShare to FacebookShare to Pinterest
Labels: Dinner, Evanston, Pop Up, Postcards from Bunny, Under the Table