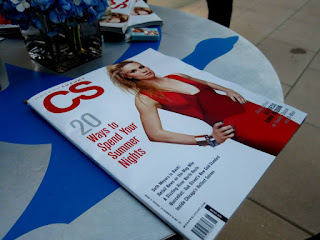 Now that Chicago is in full summer swing, Brandy has found herself inundated with requests for her attendance at several fabulous foodie events across the city.  "I haven't been this in demand since I came out as a debutante," Brandy has been known to joke.  Sadly, as she is a very busy woman (her quilting society meetings alone take up 72 hours of her week), she is not always able to attend everything that comes her way, but she made an exception this week. 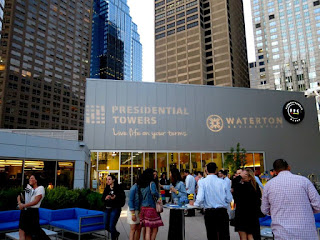 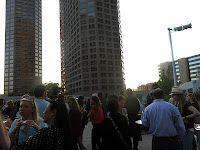 Brandy was invited to the 4th Annual Burger Cook-off, sponsored by CS Magazine and held at Presidential Towers (a stunningly beautiful and modern luxury building in the heart of River North), which featured five local restaurants and bars all competing for the title of the night's top burger.  All proceeds from the event went to benefit the Garfield Park Conservatory, a thriving community center which also provides a home base for some of the finest burgeoning performance and visual artists in Chicago.  A nobler cause there could not be in Brandy's mind. 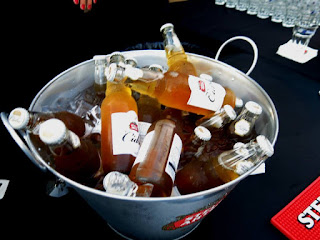 As she didn't wish to go by herself, Brandy invited along Hawk from The Cider Press to be her date for the evening so that she wouldn't feel too out of place amongst all the bright young fashionable things.  First stop of the evening was at the Stella Artois bar, where Hawk was delighted to see they were serving their signature cider along side their classic Belgian style beer.  The beverage was light, crisp, and refreshing to Brandy, but of course she was not the stated expert on the subject (we'll leave the full assessment up to our friends at The Cider Press). 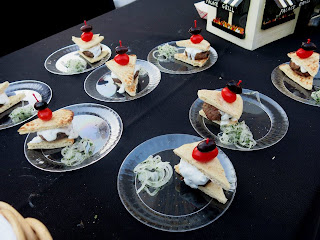 The first burger they tried was the Mediterranean Burger from Palace Grill, which had been stuffed with feta cheese and kalamata olives before being topped with a creamy tzatziki sauce and sandwiched between two pita bread slices.  The flavor very much reminded Brandy of the slider Michael Psilakis made at the Buick Food and Wine event a few weeks ago, as it had the same sort of gyro spices mixed into the meat.  This was officially Hawk's favorite burger of the night. 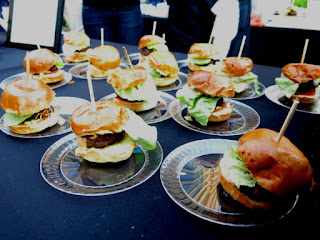 After that was the Chorizo Burger from Municipal Bar & Dining Company, which had spicy sausage at the center of its beef burger and came topped with Manchego cheese, tomato, and crispy onions.  This burger had a rather nice kick from both the chorizo and the chipotle aioli, but Brandy felt the sausage was a little overwhelming, reminding one a little more of a particularly tasty taco rather than a burger. 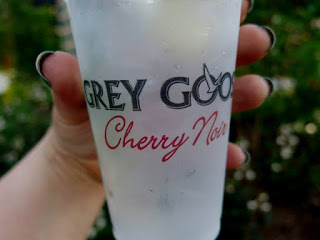 Another beverage break took Brandy and Hawk to the Grey Goose bar, where three signature cocktails were being featured.  Brandy chose a concoction that featured Grey Goose's Cherry Noir alongside some citrus elements and garnished with a sprig of rosemary.  Brandy felt the cocktail was a little medicinal for her taste, but that definitely didn't stop her from finishing off the whole thing.  "A drink is a drink," she told Hawk.  While enjoying their beverages, Brandy and Hawk managed to snag some of the side dishes being passed around, which included Tandoori potato chips (nicely flavored with Indian BBQ spices) and some tater tots topped with a truffled mayo. 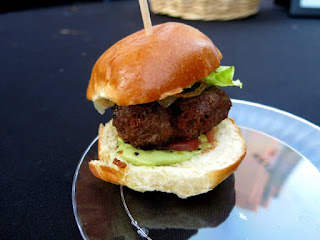 Going back to the burgers, Hawk managed to snag one of the last plates from Grill on the Alley, which featured a Peppered Bacon Burger with cheddar cheese and a little avocado.  Sadly, Brandy didn't manage to sample this burger, but Hawk said she wasn't missing much.  "I'm mostly getting the pepper," he said, "And the rest is pretty greasy and charred." 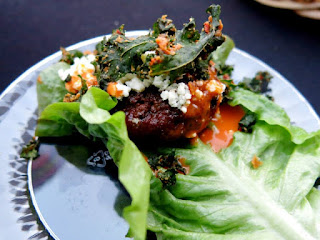 Moving on to what turned out to be Brandy's favorite burger of the evening, the amazingly creative entry from Protein Bar.  Rather than a bun, Protein Bar placed their burger on a foldable piece of lettuce and covered it in what seemed to be a tangy buffalo sauce, crumbles of blue cheese, and bits of crispy kale.  Though the most untraditional burger for sure, Brandy thought this was the most flavorful by far and she simply loved the combination of flavors and textures. 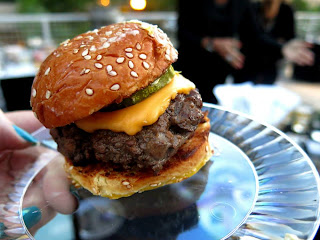 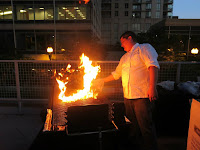 Last but not least was the all American burger from Bull & Bear (a familiar restaurant to Brandy) which had good old fashioned American cheese, tomato, and a house made pickle all stacked on a sesame seed bun.  This burger, though simple sounding, had some real love and care put into it, especially when it came to crisp slice of pickle, a condiment Brandy is usually want to bull from her burgers.  If there were special awards to be given, the Bull & Bear crew definitely should have won one for having the most fun out of all those working the event.

So all in all, a rather spectacular night was had by all at the CS Magazine Burger Cook-off, with the icing on the cake being the spectacular views from the second floor rooftop of Presidential Towers.  It just goes to show that one can surround one's self with all the splendor and luxury money can buy, but sometimes all you need is some time outside and a good old fashioned hamburger to make you feel truly at home.

*The writers of this blog were invited to this event as members of the media.