Prasino or Green Eggs are Fab 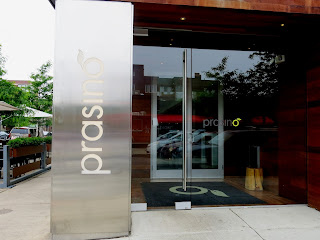 Its often hard to convince those of an older generation to lead a "greener" lifestyle.  Brandy, for one, grew up in an age where children were taught that the world was full of endless resources, and that the human race was entitled to said resources.  But as we now know, it is exactly that kind of attitude that causes global climate change, skyrocketing oil prices, and species extinction, among other things.  "In my day, you could pay the same amount for gallon of gas, a cup of coffee, or a loaf of bread, because no one thought we'd ever run out of anything," Brandy often complains, "Granted, that amount was also the wage for a days' work, but that made us more grateful for the coffee, bread, and gas!"  We hesitate to point out to Brandy that even in this day and age, a cup of coffee, a gallon of gas, and a loaf of bread are around the same price (gourmet coffee drinks and sprouted wheat bread can be pretty pricey), but to be fair to her, that price has gone up by about 1000% in the last 100 years.

So it is understandable that when presented with the notion of a "green" restaurant, Brandy often misinterprets the meaning of the phrase.  "Does that mean they use a lot of herbs?" she has been known to ponder.  Once it was explained to her that the term referred to restaurants that were making the turn towards being more environmentally friendly in the use of their facilities and the buying of their ingredients, Brandy's response was, "Well that's just silly.  Those restaurants are obviously doing those things to seem more fashionable to the young kids in their bell bottomed trousers and flowery headbands.  Its probably also an excuse to charge an arm and a leg!" 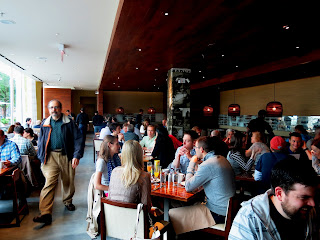 It was with this rather cynical attitude that Brandy headed off to Prasino in Wicker Park, a Greek inspired eatery that is based in a philosophy of farm to table cooking, all natural, high quality ingredients, and an overall move towards sustainability.  "That's a lot of posh tosh," Brandy was heard to remark as she set foot inside the eatery, "I don't need to know the name of the farm my eggs were hatched at, just show me the cocktail menu."

Prasino boasts an impressively open and sunny interior, with massive tables and booths available to all sizes of parties.  The main dining room was decorated cleanly, but didn't feel oppressively like it was trying to be cool.  Each table boasted a little succulent plant as opposed to a more traditional bud vase, which Brandy almost mistook for an appetizer.  "I thought it was one of those blooming onion type dishes," she said.  Quite honestly, Brandy was surprised to have been seated so quickly, as the restaurant seemed to be buzzing with people, and even more surprised to have been given a cozy booth in which to spread out. 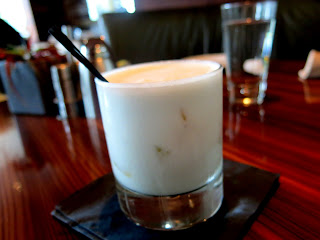 A friendly waitress approached the table, having given Brandy just enough time to browse the menu.  Brandy started off with one of the more intriguing cocktails, a concoction called the Breakfast on the North Shore, which consisted of absinthe, cream, egg whites, and caramelized orange blossom water.  "Oh, you're going to love that one!" the waitress told her, "It's the perfect thing for day drinking."  Brandy found the cocktail very interesting indeed; normally not a big fan of licorice flavored anything, the creaminess of the cocktail seemed to mellow out the absinthe's natural harshness.  "This is definitely a good drink for sipping," Brandy thought. 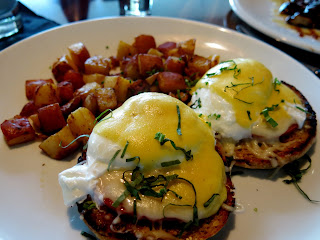 First up for food was the Caprese Benedict, an Italian inspired twist on the original with a slice of tomato standing in for the ham, a little fresh mozzarella, and a sprinkling of basil.  The muffins that housed the delicious stack of food were better than perfect: toasted and buttery while still being easy to cut through, but also tender without being soggy.  The eggs were also flawless, with firm whites and running yolks.  Brandy thought this version of a Benedict was very well balanced, with the brightness of the tomato slice and the slight herbaceousness from the shredded basil matching well against the richness of the cheese and Hollandaise sauce.  The potatoes served on the side were a little less impressive.  Though cooked very well to a creamy texture, Brandy felt a little underwhelmed by their simplistic flavoring.  "I suppose I've been spoiled by the use of more exciting spices in the past," Brandy mused. 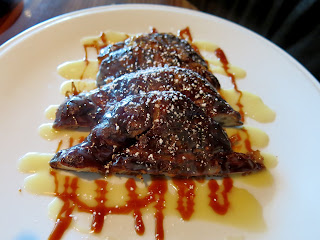 As a sweet ending to her meal, Brandy ordered a plate of the Pretzel Croissant French Toast, which came served with a white chocolate and salted caramel sauce.  Immediatly, Brandy was struck by the texture of the "toast," which truly was the perfect hybrid of  a pretzel and a croissant.  "Its as though the baker was making both, got confused, and mashed the two doughs together!" she said as she chewed.  She loved that the dish had a nice subtle, salty hit and that the decadent sounding sauces weren't' too overwhelming to the palate in either richness or sweetness.

Although the atmosphere was bright, the prices weren't absorbent (Brandy paid around $40 with tax and tip included), the philosophy noble, and the food plenty tasty, it was the friendly and efficient service that really set Prasino apart in Brandy's eyes.  The mere fact that her waitress had actually come back to the table to inquire conversationally (as opposed to a forced professional politeness) about Brandy's liking of the cocktail spoke volumes about the level of care put into the restaurant and turned it from a stop on the trendy foodie's to-do list to a place Brandy would love to visit over and over again.  If anything, Prasino shows that a restaurant can be consciously minded without having to sacrifice anything in price, taste, quality, or service. 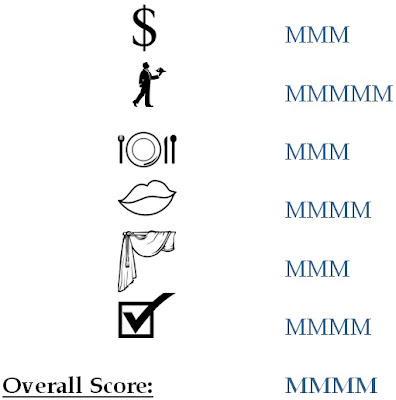