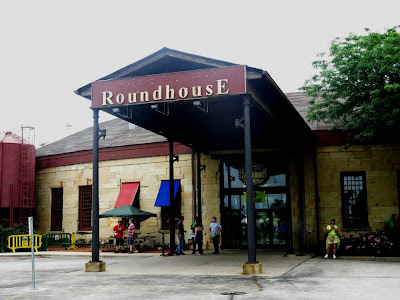 Nothing says summer like live music, good food, and great beer, but sadly two of those things are not normally a part of Brandy's brunch routine.  "I know the young people like having beer with their brunch, but we just don't do things like that in England," Brandy says, "Beer is only for lunch, after lunch, tea time, before dinner, during dinner, and after dinner.  But definitely not for brunch."  But when Brandy heard that Two Brothers Brewing Company was hosting their annual Summer Festival last weekend, she decided to make an exception. 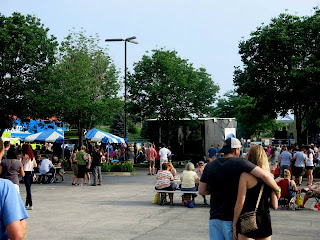 Bringing along with her Bailey and Hawk from The Cider Press, the trio arrived early in the day in order to get a lay of the land.  The festival was being held on the grounds of The Roundhouse, Two Brothers' historic figurehead tavern.  Outside the building, a series of tents had been set up, boasting some fine festival food offerings, some of Two Brothers' own signature beers, and also selections from other local breweries, all leading to the mainstage, which was set to host a number of amazing local bands.  General admission allowed one access to the festival and concerts, with tickets for food and beer available for separate purchase, but the VIP passes afforded one not only five complimentary beers, but all the food you could eat and access to the inside of the Roundhouse, which was hosting even more beer tastings, food, and even an art show.  Being a VIP wherever she goes, Brandy naturally took the latter option. 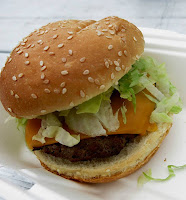 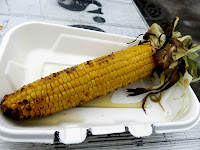 Diving straight into the food and drink, Brandy and company picked up some choice tidbits from the booths first.  The cheerful people working the tents were quick and efficiant all day long, providing the crowds with fresh grilled corn on the cob, burgers, hot dogs, short rib or pulled pork sandwiches, and more creative offerings like tater tots topped with beer flavored cheese and sweet fried bread rounds, coated in an orange zest syrup.  Typical festival food, to be sure, but done so brilliantly right that Brandy didn't even miss her usual brunch time favorites. 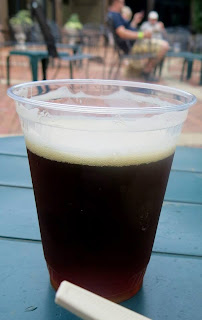 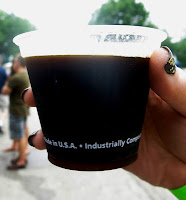 As Bailey was the designated driver for the day, she started off with some Cinnamon Root Beer, a wonderfully flavored beverage that went not only with the BBQ style food, but with the relaxed atmosphere. Hawk and Brandy, on the other hand, started their day with the Dog Days Lager and the Hop Black respectively.  The Dog Days proved to be light and crisp, the perfect thing to start off a summer afternoon, while the Hop Black was strong, a little bitter, and boasted an almost coffee like flavor, which Brandy liked very much.  Because the Hop Black was so strong, it was served in a smaller portion, meaning Brandy was soon moving onto her next beer, the Ebel's Weiss, a more mild, full bodied beer with an almost bread like after taste. 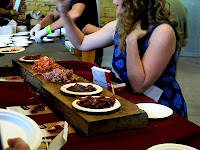 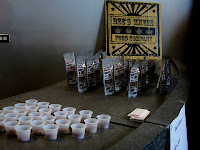 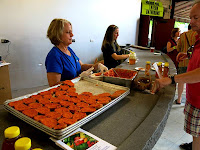 After watching the first band play, Brandy and friends moved inside the Roundhouse to get a look at the other goings on.  The main tavern had been opened up for people to sit and enjoy a broadcast of the music outside, while still in air conditioned comfort.  There were food demos from local companies like Bee's Knee's Bar Snacks and Wagner Farms Honey in the main lobby, a roaming string band performing in different areas of the building, and each of the other smaller bars throughout the Roundhouse carried a myriad of seasonal and specialty beers from Two Brothers Brewery.  The center of the building opened out into a circular beer garden with a beautiful pagoda like gazebo at its center, from which smaller concerts and performances are hosted all throughout the summer months.  Buffet tables (another perk of the VIP tickets) had been set up both inside and out, serving more BBQ favorites like cole slaw and potato salad along side more burgers, hot dogs, and the like for lunch, and Mexican themed dishes like vegan enchiladas and chicken verde for dinner. 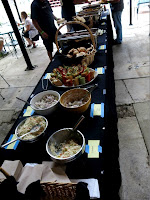 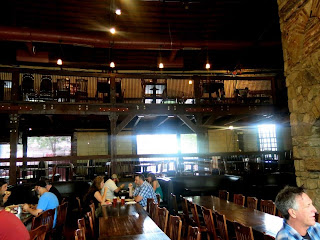 After a few more plates of food from the buffet, Hawk and Brandy once again sampled some of Two Brothers' wears (while Bailey sipped on iced tea and enjoyed their giggling and general loss of balance).  Brandy was intrigued by a brew called the Laughing Panda, which was an IPA flavored with green tea.  Not usually a fan of light beers, Brandy was more than a little skeptical about this particular one, but it turned out to be rather refreshing, a little bitter, and truly unique as it actually did taste like a perfect hybrid of beer and tea!  Hawk opted for the Resistance, another IPA, but this one aged in oak.  This beer had a lovely smoothness that matched its woody flavor, but was sadly not a great sipping beer, as it became very sour as it warmed. 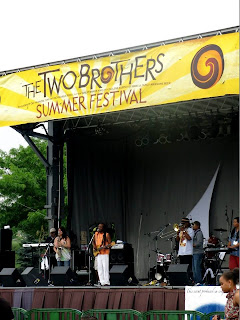 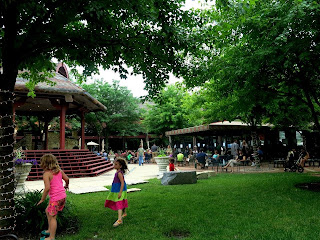 Brandy managed to grab one last beer (a heady and rich cocoa stout) as they headed back out to the main festival to watch a lively reggae band.  Though not wont to join in with the masses dancing on the pavement, Brandy did have to admit admiration for those who had planned ahead and brought their own chairs to make for nice little picnic encampments on the grass.  "This is certainly not like the festivals in Chicago," Brandy mused, sighting that the laid back, happy atmosphere is something rare at a lot of bigger festivals, where slow moving tourists can lead to pushy locals, and the emphasis often tends to be on sales and promotions, rather than creating a genuinely good time for the attendees.  So although it may not have been a typical brunch for Brandy, she had to admit that there was no better way to spend an afternoon than with good friends, good food, good music, and of course some truly great beer.

*Brandy and friends were given free passes to this event by Two Brothers Brewing Company as members of the press
Posted by Bunny and Brandy at 11:10 AM