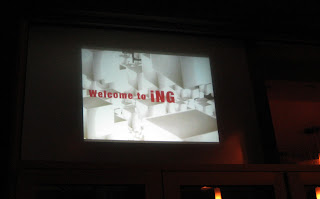 Let us address the elephant in the room straight away.  No, Our Ladies are not reviewing brunch this week.  This is a special, first time ever dinner review of ING, a new Japanese themed casual molecular dining experience restaurant in the meat packing district of Fulton Market.  The brain child of Moto's Homaro Cantu and Executive Chef Thomas Bowman (who was head chef to ING's previous incarnation, Otom), ING only just opened officially at the beginning of March and has been creating quite the stir with such oddities as hand pulled "infinity" noodles, origami menus, and house made beers, brewed in "nano" batches with unique flavors like curry IPA or coffee and donut Stout. 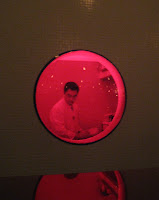 The cause for this unusual derivation from Bunny and Brandy's brunchly duties was dear old Bunny's birthday (they say to never ask a woman her weight or her age, but in Bunny's case the answer to both questions is the same number).  A group of their finest friends had gathered for the event; Bunny's own Benedict of course had gotten time off from his excavation of a Mayan tomb, Bakewell Burgundy had thrust his understudy onto the stage just as the curtain was rising so that he could attend, Birdie and Biscuit Brown had abandoned their weekly CCCC meeting (Cajun/Creole Citizens of Chicago), and Brandy gave up her usual Saturday night spent drinking alone to go out and drink with everyone. 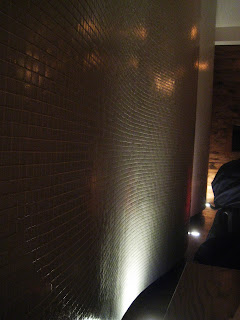 ING's interior is quite minimalist and modern, with a wavy tiled wall on one side, a wood paneled wall on the other, an awkwardly placed bar, and several comfy six person tables furnished with bright orange plastic chairs and benches.  White coated servers buzzed throughout the room, talking into wireless headsets and generally looking rushed.  Although Our Ladies had obtained reservations for 8:00, they were still asked to wait for about 15 minutes until a table was available.  Once seated with the whole party, an order was placed for the Flight of Beers, which Our Ladies and guests were thinking was going to be a sampling of all the so called Nano Brews.  Sadly, a server informed them all too late that the nano brew's fermentation process had taken longer than anticipated this week and the house brews were unavailable.  Instead, the party was presented with 5 samplings of ING's other beer offerings.  While still a fun way to start the meal, the lack of the nano brews was definitely a big disappointment, especially to Brandy.  "I've tasted every kind of beer you could ever imagine," she ranted, "I was looking forward to being surprised." 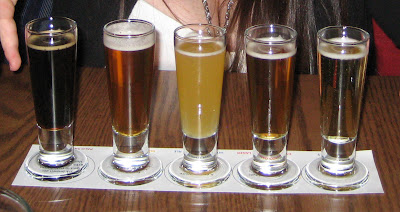 Next, Our Ladies and guests were presented with their menus, which were folded into origami cubes and hid an amuse bouche, a single shot of miso soup in a sake glass.  The soup itself had a nice spicy finish, but Bunny felt it was a little salty.  The table chose to partake in ING's dine by the hour option ($45 an hour for how ever many hours you have to spare and you are treated to the chef's choice of dishes from both on and off the menu).  A round of cocktails were also ordered; for Birdie, Biscuit, and Bakewell a concoction called The Stepfather (a sweet and tangy mix of amaretto, absinthe, lemon, and whiskey), for Bunny The Kimura (a light and fresh tasting combo of grapefruit, vodka, St. Germaine liquor, and Aperol), and for Brandy, the ever classy Smoked Manhattan (a slight twist on the traditional mix of bourbon, sweet vermouth, and bitters). 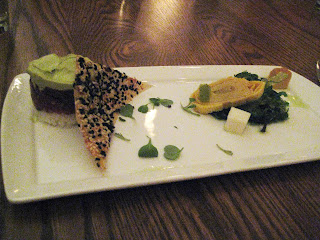 Soon, the first course was being presented balletically to the table; a seaweed salad with a Japanese rolled omelet (brunch after all!) and tuna tartar served with sticky rice, avocado mouse, and a sesame cracker.  The seaweed salad was surprisingly sweet and fresh tasting with a lovely after taste of sesame oil.  The tuna was exceptionally smooth and flavorful (even Brandy, who never eats cooked fish let alone raw fish, gobbled up the dish), especially the avocado mouse, and the cracker on the side made for a great change in texture. 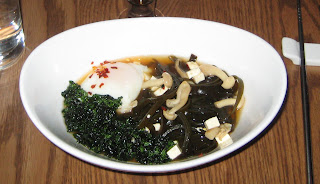 Next came a soup made from soy sauce marinated seaweed noodles, popped kale and enoci mushrooms, topped with a poached egg.  This proved to be an unpopular dish with both Bunny and Biscuit, who didn't care for the texture of the noodles, nor the blandness of their flavor.  The broth however, once allowed to mix with the yolk from the egg, was pleasantly rich, with a touch of heat from a few strategically placed chili flakes.  The kale was definitely the hit of the dish, having somehow maintained a nice crunch and toasty flavor even after sitting in the broth for several minutes.

The meat course was next, and came in the form of Wagu Beef, sliced thin, skewered, and cooked at the table on hot bricks.  They were then plated with a savory rice crispy square, some brazed Japanese eggplant, and ponzu glaze.  The beef was extremely tender and silky in texture (Bunny thought her piece was under cooked, but Brandy insisted such high quality beef should be served on the rare side).  The rice square, which was breaded with panko, had a nice risotto like filling, but the eggplant was a little overly seasoned with soy sauce and came off very salty. 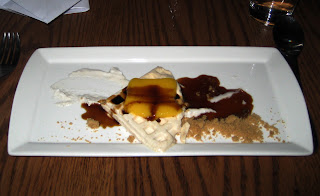 The final course was dessert, a frozen waffle ice cream (made from pureeing a cooked waffle batter, then "cooking" it on an anti-griddle with liquid nitrogen to make it resemble a waffle) topped with orange sorbet made to look like butter pads, stout maple syrup, and coconut whipped cream.  The frozen waffle was light, creamy, and absolutely tasted of waffle and the orange sorbet added a lovely brightness.  Though utterly delicious, the confection didn't quite fit into the Japanese theme that had been bestowed on the rest of the meal.

A bit on the pricey side, though not nearly as bad as it's next door neighbor Moto, ING definitely delivered on its promises of innovation, quality ingredients, and a unique dining experience.  ING may still have some growing pains to work through, but in the end it seems like the restaurant will make a nice casual companion to its high brow cousin, thus encouraging more people to experiment with what they think they know about what they think they like. 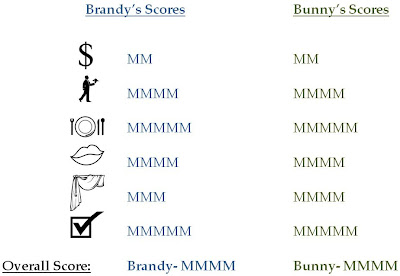