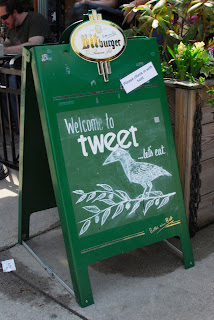 Believe it or not, there are some people out there who don't like Bunny and Brandy.  People who are snobs.  People who are jealous.  People who are, well... French.  Mostly, we are referring to Bunny and Brandy's sworn mortal enemies, Brulee and Brioche, founders of "Brûlée et Brioche Blog Heure du Brunch," which they write from their home in Bitche, France.  There's some disagreement about who started the Brunch Blog first; Brioche says Bunny stole the idea from them in 2010 after being told about their blog while visiting Paris, while Brandy insists that although she and Bunny have only been online since last fall, they would have been blogging much earlier if they had known what a blog was before that point.  Either way, when Bunny and Brandy learned their counterparts were going to be visiting Chicago, there was only one thing to be done... invite them to brunch.

Our Ladies chose Tweet as their battleground, a lovely cafe in Uptown with a litany of its own rules that all the regulars know by heart.  As that Sunday was unseasonably warm, all of Chicago was out in droves, crowding up Tweet's two rooms, front patio, and back patio, causing Our Ladies and guests to wait in the bar for about 40 minutes.  Brulee, unable to control her sweet tooth, started eyeing up the cakes on display by the hostess stand and asked for a piece of Red Velvet to tide them over.  The cake itself was a tad dry, but the thick and rich cream cheese and almond frosting was more than enough to make up for it.  While savoring the cake, Our Ladies had a chance to take in the unusual local art choices spread around the interior.  Bunny gave a tiny yelp at seeing a picture of a naked man holding a tiny silver purse, to which Brioche snickered, "You English are such prudes.  In France, we have real naked men with purses in every restaurant!"

At last called to their table, Our Ladies and guests made their way through the crowd and past several smiling waitresses to a comfy little booth in the back.  The table was pre-crowded with every condiment one could ask for, including a plate of corn bread like chocolate chip banana bread for the brunchers to share.
After sifting through the gigantic and tantalizing menu, orders were placed; for Brioche, the Bim Im Bop, a Korean inspired breakfast bowl, for Brulee the Eggs Florentine (which completely infuriated Bunny), for Bunny the Crab Cake Sandwich (originally she had ordered the Tomato Basil Quiche, but they had sadly just sold the last piece) and for Brandy the Corn Aripas with a side of chicken sausage, as well as a cocktail called the Blue Velvet ("If anyone expects me to get through this brunch sober," she whispered to Bunny, "they are sorely mistaken.").  Ordered for the table to share was a house specialty called Danish Aebleskiever, a sort of oven baked beignet. 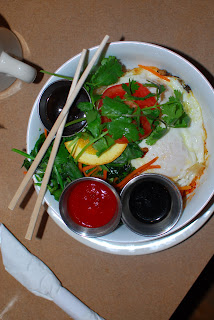 Brioche's Bim Im Bop turned out to be quite the hit.  Served with three sauces and loaded with organic brown rice, tons of veggies, and topped by a poached egg, the variety of ingredients insured that every bite had its own unique combo of flavors.
Brulee enjoyed her Eggs Florentine with relish (not literal relish, of course.  The color of traditional Chicago relish is enough to scare off the most discerning diners).  She declared loudly that the hollendais on this particular dish was one of the most delicious and buttery sauces she'd ever had.  Bunny's cheeks were quite obviously growing red and a distinct vein had begun to throb on her temples.  Brulee also reported that her hashbrowns were simple, but good.  Her fruit cup, however, was daintily served like an ice cream sundae with a good variety of morsels for sampling. 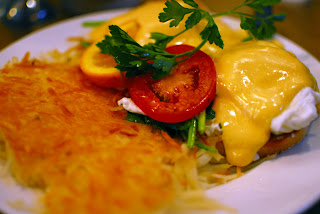 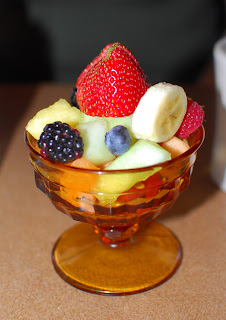 Brandy's cocktail was quite pretty to look at, and quite nice to drink as well.  A very clever alternative to the mimosa, it was light and crisp without being too sweet.  Her chicken sausage was rather nice too; it had a good snap and a lovely sweet, juicy interior.  The Corn Aripas, or corn pancakes, came served with a massive chunk of avocado on top, as well as some mildly spicy red sauce and sour cream.  The cakes were a little dry, but combined with the various toppings the effect was a bright, savory flavor that really awakened the taste buds. 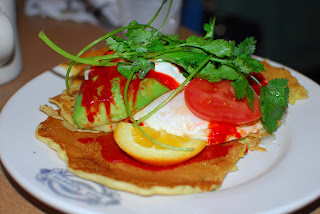 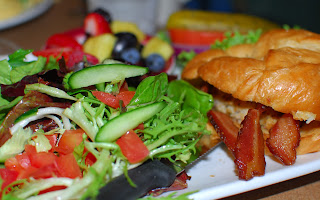 Bunny's crab cake sandwich was a little disappointing.  The cake itself tasted good enough, with only sweetness and no fishy notes, but was so tiny that it barely covered half the croissant it was served on.  Bunny had also requested bacon and avocado, half of which she received and half she had to ask the cheerful waitress for.  The consolation was that she received both a fruit cup and a small side salad, so her plate seemed to resemble a colorful garden. 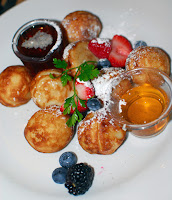 Last but not least were the Dutch Aeleskievers, which came served with maple syrup, orange honey, powered sugar, and some fresh berries.  More cake like than a regular beignet, yet rather light and fluffy on the inside, the confections made the perfect little sweet bite to end brunch with.

After such a table collapsing meal as this (though not wallet collapsing at an average of  under $20 a person), one would think everyone would leave with no more room left for ill will in their bodies.  But even as they waved goodbye to their rivals, Bunny and Brandy just knew that this war was not over.  Luckily, Bunny's brother, Mr. Bacon, knew a few people with good computer skills, who managed to redirect everyone trying to access a certain French brunch blog onto the homepage of Our Beloved Ladies. 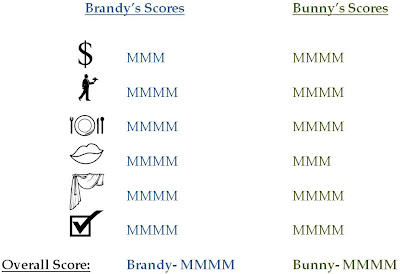