Medici or The Writing on the Walls 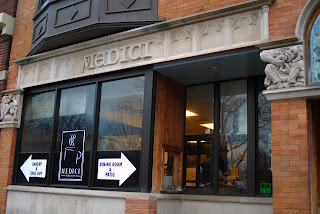 There's not many people who can appreciate a rainy day quite like Bunny and Brandy can.  Gloomy days tend to make Our Ladies rather home sick for Old Blighty, you see.  "It's days like this," Brandy sighs whenever the clouds roll in, "That make one want to make a cup of tea, light some candles, put on a bit of Mozart, and read a Sherlock Holmes story."  But Bunny decided that for once, this rain-induced longing for all things English was not going to get to them, so she suggested they head to Medici on 57th in Hyde Park for a nice homey brunch. 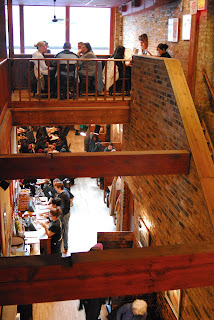 Medici's stone front is at once imposing and heart warming, presenting visitors with a cheerful relief of a gargoyle scarfing down a pastry while being watched by a pope.  Once inside, Our Ladies were given the choice of sitting up stairs or down, and despite Brandy whining about her bad knees, Bunny chose the upstairs so that they may have the benefit of a view from above.  The upstairs was a warm spot, both visually and literally.  The walls which weren't exposed brick were covered in both graffiti and hand painted murals, and the hard wood floors were pleasantly squeaky.  Our Ladies were told to sit themselves wherever they liked, so they chose a nice table by a window so that they could gaze out upon the rain.  The unfortunate side effect of the seats they chose was that Brandy got squished in between the wall and the table, but otherwise they felt right at home. 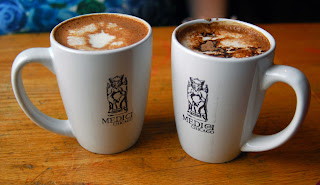 First order of business was to obtain some warm beverages.  Brandy chose the Mexicana, a Mexican spiced hot chocolate, while Bunny chose the Chocolachino, a more adult version of traditional hot chocolate.  The Mexicana tasted of warm cinnamon mostly and was a wonderful compliment to a rainy morning, while the Chocolachino was rich and delicious with just the right amount of coffee flavor to make it sophisticated.

Following that, Our Ladies chose some items from the bakery to start off with.  Brandy picked the apple croissant, which was warm, flaky, and fresh tasting with the apples inside still having a nice texture to them.  Bunny chose the cinnamon roll, which turned out to be a bit more of sticky bun.  The inside was dotted with raisins and all together the confection had just the right amount of sweetness. 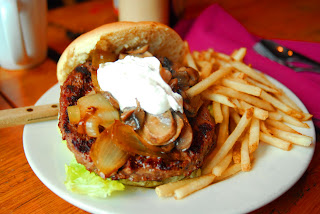 When it came time for the main courses, Bunny picked a rather interesting entry from the lunch options, a Strogenoff Burger, which came complete with mushrooms, onions, and a dollop of sour cream.  While this combination sounded good on paper, the over all effect of the dish was not as impressive.  The burger, while enormous, didn't offer much meaty flavor, and was completely enveloped by the density of the bun.  The burger itself was not as warm as it could have been and a little over cooked,  The shoe string fries on the side were lovely and crunchy with excellent flavor. 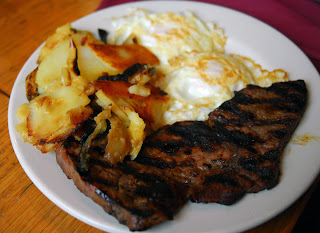 Brandy picked the New York Strip breakfast, which came complete with two eggs, potatoes, and toast.  The steak was very over done (Brandy had asked for medium and got a steak with no pink left in it at all) but had a good char on the outside.  The eggs were perfectly done with runny yolks aplenty.  The potatoes were also very well done; crunchy and flavorful without being greasy.
Hot drink, pastry, and main dish as well as tax and tip came out to just about $20 a person.  Along with cheerful and prompt service, Medici provided Our Ladies with the invaluable feeling of being happy to be where they were.  All feeling of home sickness having left them, Our Ladies journeyed out into the rain arm in arm, full stomached, and rather content, an emotion the English have yet to fully master. 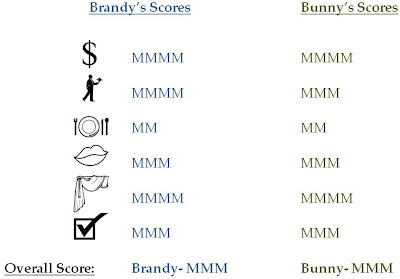