PJ Clarke's or The Lights are on, but... 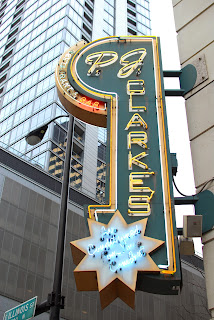 To buffet, or not to buffet, that is the question.  Whether it is nobler in the mind to suffer the sweets and savories of outrageous menu choices, or to take plates up to the heating trays and by opposing end the decision making process.  To dine, to eat, to eat, per chance to brunch.  Ay!  There's the rub. For in that meal of brunch, what dishes may come when we have shuffled off to join the line at the make your own omelet station must give us pause.  These and other questions are some of what Bunny and Brandy must ask themselves every Sunday morning, and this Sunday morning the answer happened to be "buffet."
Bunny and Brandy met their dear friend Bailey Blue at PJ Clarke's in Streeterville to partake of their supposedly sumptuous brunch buffet.  Entering through the bar, Our Ladies were told they could choose to sit there, or in the more spacious dining room (either up stairs or downstairs).  Bunny, Brandy, and Bailey did the only logical thing and sat themselves directly in front of the buffet table. 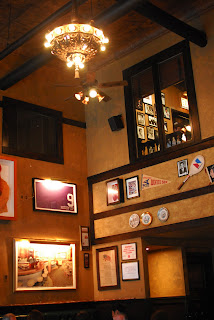 The dining room was cavernous, with impossibly high ceilings and random objects and pictures awkwardly hung on every inch of wall space.  A massive wine rack dominated one section of the staircase, casting differently colored shadows over the red and white checkered table clothes.  Plenty of smiling (and rather scrumptious, as Brandy pointed out) waiters wandered about the room, delivering glasses of water and complimentary fresh squeezed orange juice.  "Isn't that sweet of them!" Bunny exclaimed.  Our Ladies and guest were given the option of choosing something to eat off the lunch menu, or paying a flat $14.95 for the breakfast buffet.  After much hemming and hawing, all three chose the buffet.

The first thing that struck them was that there weren't very many choices.  Bacon and sausage, pancakes and potatoes, scrambled eggs, a fruit plate, some lox, and a selection of muffins and bagels were the major part of the dishes available for consumption.  There was also a station for making one's own omelet (or rather, pointing awkwardly at ingredients for the chef behind the table to form into an omelet for you).  All three ladies agreed the addition of some sort of salad, some french toast, and one or two other hot items would have helped round off the buffet selections. 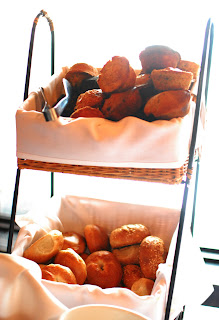 Top Dishes: The bacon was generally applauded by all at the table for being perfectly cooked and having a pleasant smokey taste.  The home made muffins were also quite well done (Bunny chose a lemon poppy seed while Brandy and Bailey chose chocolate) being moist and flavorful.
Bottom Dishes: Bailey and Bunny reported the pancakes to be extremely dry, even after being covered in syrup, whipped cream, and strawberries.  In fact, during the entire time Our Ladies and guest were seated, the pancakes were never once replaced or replenished.  Also the potatoes, according to Brandy, were rather limp, greasy, and flavorless, though Bailey did enjoy them, so perhaps that old adage about great minds thinking alike does not always apply. 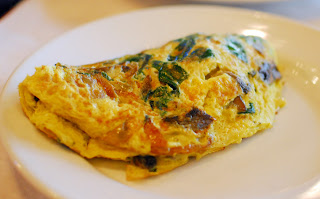 Brandy was the only one who opted to create an omelet, which she did with caramelized onions, spinach, mushrooms, and mozzarella cheese.  The result was pleasantly fluffy, though Brandy did wish fresh spinach had been used rather than pre-cooked.

There was also a silver platter of petite fours laid out.  Though rather pretty looking (if not a tad out of place beside small boxes of Frosted Flakes and Raisin Bran) most of the bites were nothing spectacular.  Brandy's advice was to steer towards anything that resembled chocolate.
Though a lovely place to relax and have a chat while brunching, PJ Clarke's comes up a little short on the buffet front.  So if you, dear reader, should venture to this establishment, maybe consider choosing from the lunch menu.  For after all, as Brandy puts it, "To thine our meal be true." (Note: Brandy is under the impression that Hamlet was written about breakfast meats).
The Short and Sweet Review: 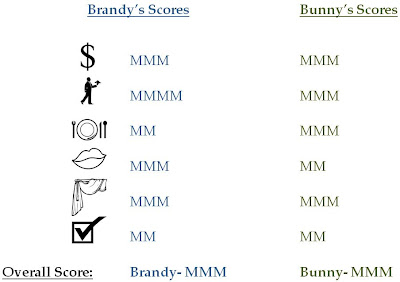