Tavern on Little Fort or The Big Game 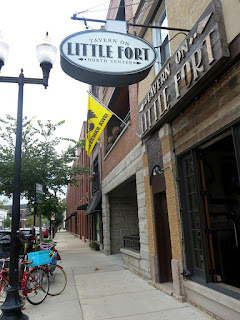 For a sports fan in Chicago, autumn can be the most stressful time of year. Are The Bears going to ever find a halfway decent quarterback? Just how many injured players can The Blackhawks put on the ice before everything falls apart? Is there a second part to the Curse of the Billy Goat that means The Cubs will be in the playoffs for the next century, but will kill all of their fans by playing insanely stressful games? These are all questions Brandy never used to waste any of her brain cells thinking about ("Those brain cells are reserved for killing with alcohol, by God!" as she says), but now that she's been in Chicago for over a decade, they are the things constantly at the forefront of her mind.

"Maybe it's because I brunch every Sunday morning and I have inadvertently absorbed all this sports nonsense," Brandy was saying to her good friend Bailey one day, "You know, the televisions are always on at the bars and such, so I must be subconsciously acquiring information from them while I sip my mimosas." "It's hard to live in a city like this and not become a sports fan of some kind," said Bailey, "Speaking of which, there's four different games I need to catch that are about to start. Would you like to come watch with me?" "Well..." "And grab some brunch?" "I suppose I could be persuaded." 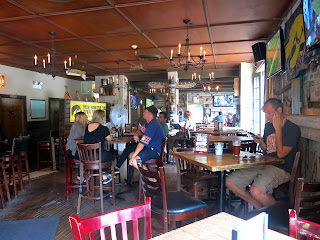 They ended up at Tavern on Little Fort, a comfy Bavarian style bar in the heart of North Center. The dark woods that covered the inside of the bar gave the place a warm and familiar feeling, but Brandy was glad to see that they also had a beer garden and a sidewalk patio for those diners who desired a little more light. Though Brandy usually prefers to stay indoors, Bailey convinced her to take a table on the patio where they could still keep an eye the various games being broadcast on the televisions inside. The trick was that alongside the Chicago games, Tavern on Little Fort is actually a Hawkeyes, Raiders, and St. Louis Cardinals bar, so a variety of teams and sports were being shone.

Though the mimosa and bloody mary bar were tempting, they decided to start things off with a pair of cocktails from the regular menu: Bailey got the RBC Spritzer, which was a mix of a honey scented cider and a sauvignon blanc, while Brandy went with the Mimosa After Dark, which came with a splash of passion fruit liqueur along with orange juice and champagne. Brandy rather liked the additional flavor, which gave the drink a pungent yet enjoyable fruitiness. Bailey felt her spritzer was a little more heavy on the wine and sort of watered down the taste of the cider (as an admitted cider snob, it was the addition of the cider that had peeked her interest in the first place). 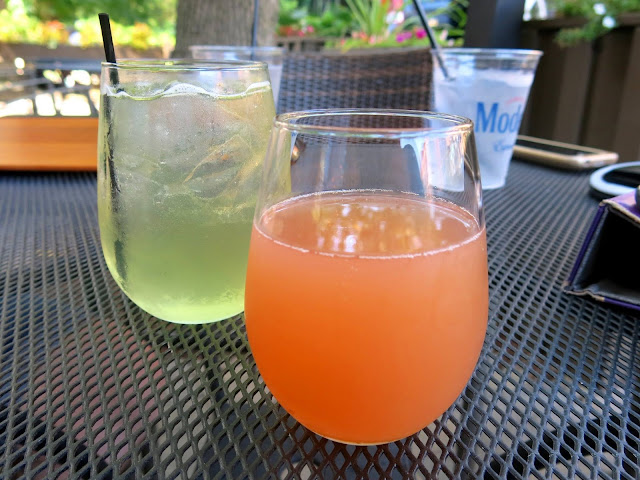 For their appetizer course, they picked out a couple of easy-to-munch dishes that wouldn't get too messy if they dropped bits of them down their fronts when they had to suddenly turn their attentions to the games. Firstly, there was the Fried Brussels Sprouts, adorned with bacon, smoked almonds, and cranberries. Brandy was pretty taken with these flavorful little morsels, which were crispy, crunchy, smokey, and sweet all at once. Bailey only had eyes for the Loaded Tater Tots; a pile of freshly made golden nuggets topped with crumbled chorizo, chihuahua cheese, tons of green onions, and a drizzle of crème fraîche. The result was an indulgent mountain of deliciousness, held together by some really well made tots that were crunchy on the outside, but like mashed potatoes on the inside. Bailey especially enjoyed the flavor of the chorizo, which had a good spicy kick that helped cut through all the richness and starchiness. 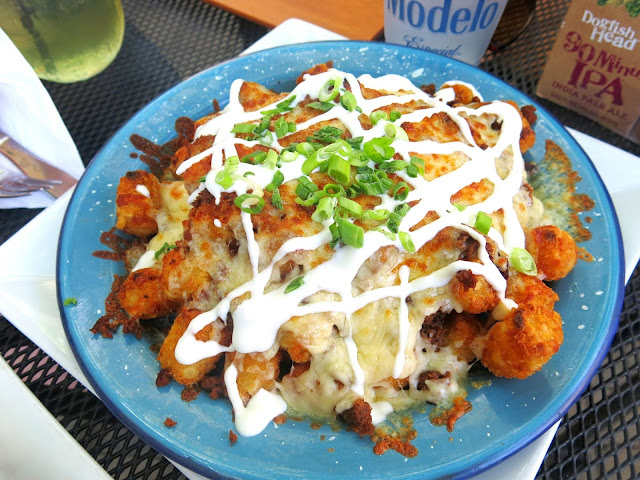 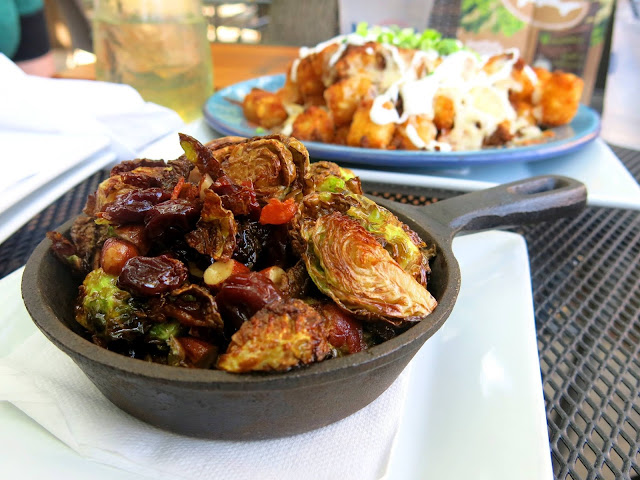 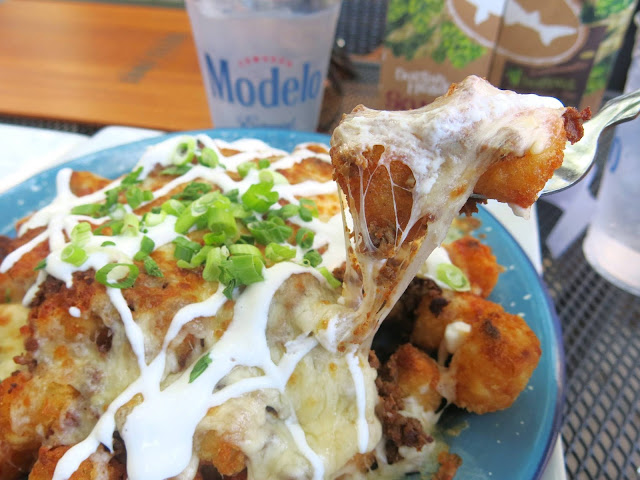 For her entree, Bailey chose the Brunch Schnitzel. The massive slab of breaded pork came topped with a fried egg and a healthy portion of smoked potatoes and pickled red onion. She was very happy with how juicy the pork was on the inside as well as the well flavored potatoes and onions, which stood up to the meat quite well. "I'd say that I could eat this every day, but if I did, I'd be as big as one of those line backers," she giggled, mostly to herself, as Brandy was enraptured by a play happening in the baseball game she was keeping an eye on. 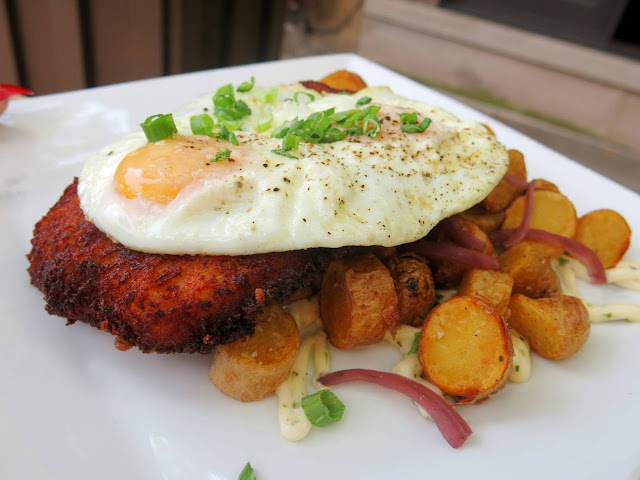 When not distracted by the game, Brandy was munching on her Breakfast Burger. She realized after one bite that she had actually tasted this burger before, at Tavern on Little Fort's sister restaurant Commonwealth Tavern, but it was just as tasty as she remembered. The patty had been made with brisket and bacon, which gave it a wonderful smokey under current, and the fresh made bread and butter pickles lifted the whole thing with a little tangy sweetness. "I didn't even mean to order the same burger I had back at the beginning of the year, but goodness, am I glad I did! Do you see how perfectly that egg on top was cooked? It's certainly the MVP of the whole meal." 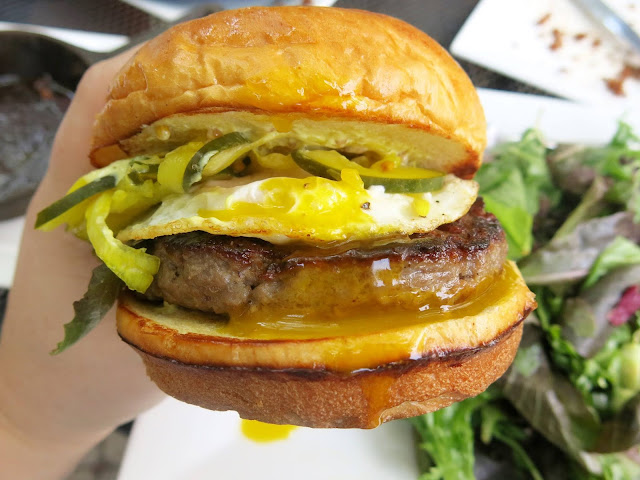 Brandy and Bailey eventually tottered away from Tavern on Little Fort with full tummies and a touch of stress induced indigestion from watching their respective teams make things a little too exciting. The service had been very relaxed, an accomplishment for a place that was actually quite busy and a little under staffed. There could not have been a better menu to enjoy a game with and the prices were fair enough to enable a couple of extra rounds of drinks should any games go into over time. "I suppose I have to accept that I am a bonafide sports fan now," Brandy sighed. "Is that such a bad thing?" Bailey chided her. "No, but it's hard for a former athlete like myself to just sit back and watch others compete." "You were an athlete?" "Of course. Competitive eating is a valid sport, isn't it?" 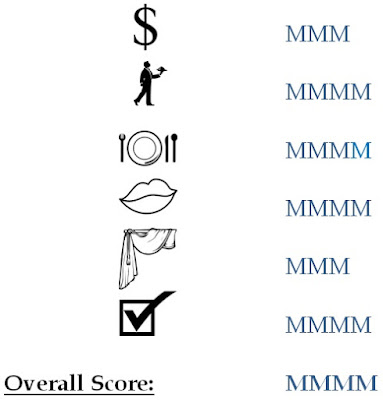