Novo or Oh! You Pretty Things 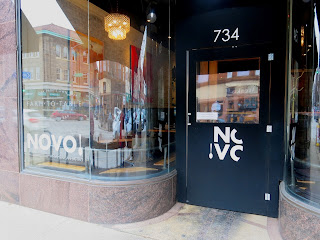 One of Brandy's favorite places in all of Chicago is the Art Institute. That fabulous establishment that houses centuries worth of human achievement in the arts and beyond is as hallowed as ground can get in her view of things. "Beyond the ability to create undefinable beauty, art is the thing that makes being alive worth it," Brandy says, "For without something to ignite the senses and remind us of how extraordinary the world we live is, what is the point, really?" Brandy has much the same opinion when it comes to food. Just as an expertly painted portrait is a delight to the eyes and the precise placement of notes in a song can please the ear, the perfect combination of flavors on the tongue is one of the most transcendent experiences one can have. 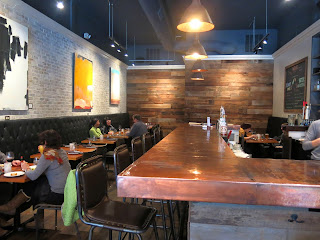 Though she's had some terrifically tasty meals as of late, Brandy hasn't quite had her senses ignited by a plate in a very long time, at least not in the same way they are ignited by a piece of fine art. She was lamenting this fact to her friend Starr as they took a Sunday morning drive out to Oak Park to check out the recently revamped menu of a little hole in the wall place called Novo. "Brunch is so easily tossed off and forgotten these days. I'm just longing for one of those truly special meals that really make me feel inspired and hopeful. Not just some tasty bit of something on a plate, but a complex, thought out culinary adventure. I do so hope we find such a meal today." 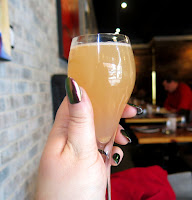 Novo was fairly unassuming, but cozy and warm. Understated lighting, warm woods, cafe music, and exposed brick all culminated in an atmosphere Brandy likes to refer to as "wine barrel like." Starr and Brandy sat themselves by the window so as to people watch and ordered up a few glasses of Pear Bellinis, which were nicely crisp and sweet.

To start off their meal, the ladies were presented with a plate of Roasted Squash Hummus, which had been drizzled with some mint oil and topped with pomegranate seeds. The result was a lovely combination of fresh, sweet, and earthy flavors with a nice bit of texture from the bits of roasted squash. They both enjoyed the warm naan bread served with the hummus, so much that they had to request a second round of it so as to keep shoveling the golden orange spread into their mouths. 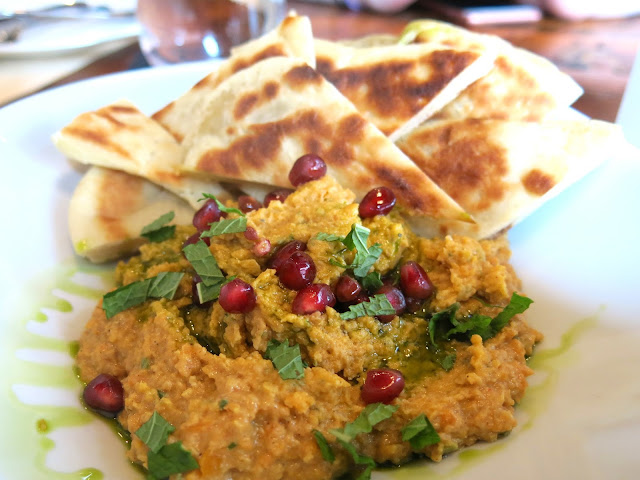 Next came a pair of delightful salads: the Roasted Beet Salad and a brand new invention the chef had only just premiered at the dinner service the previous night, an Almond Salad. The beet salad consisted of oranges, pickled beets, radish, a chunk of fresh burrata, and a swirl of vanilla bean vinaigrette, of all which combined for a bright and hearty mouthful. The burrata, especially, added a complex creamy note to balance out some of the more acidic flavors. The almond salad was a bit more unusual, bringing together slivered almonds, fried parsnip strips, pickled red onion, sliced apples, and a toasted almond puree. Both ladies loved the slight sweetness of the dish, which was complimented by the overall nutty flavor and creamy texture with a light crunch coming from the parsnips. "I wasn't quite expecting such an burst of flavors from such a simple looking salad," said Brandy, "but I'm happy to be so thoroughly proven wrong!" 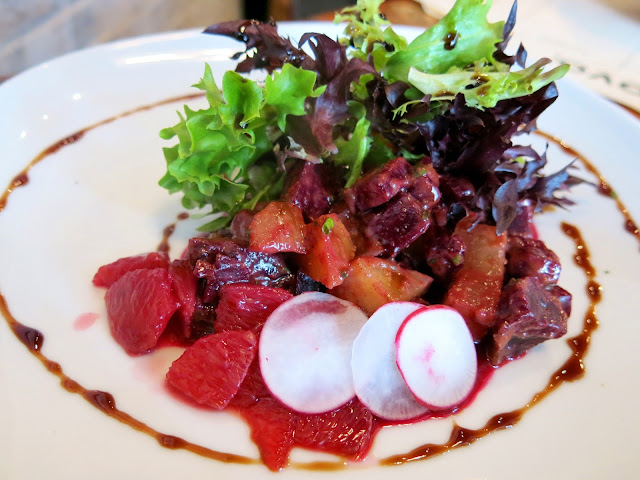 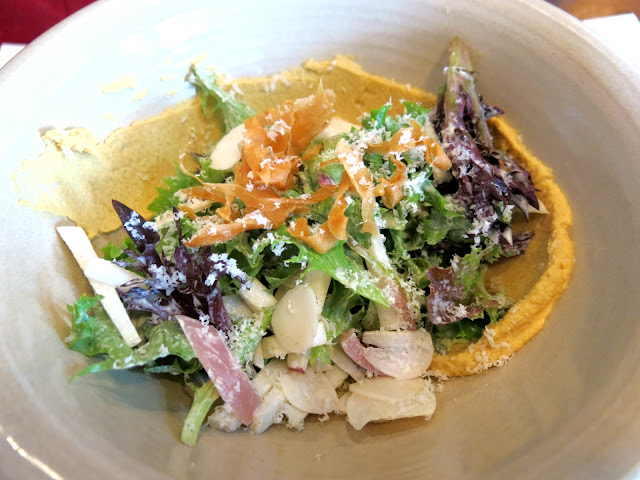 Following that, a couple of entrees made their way to the table in the form of a Prosciutto Benedict and a Smoked Trout BLT. Brandy just adored everything about the Benedict, from the chive infused hollandaise to the delicate salt flavor from the prosciutto, to the sprinkle of crisped shallots on top of the perfectly poached eggs. "This is simply divine and unique, yet has all the hallmarks of a classic benedict," said Brandy, "It's a rare day that I become this excited by a hollandaise any more!" Starr favored the trout BLT, which had a thick slice of delicately smoked fish that went toe to toe with the bacon, meaning neither one completely overwhelmed the palate. The house made items were some of the best things about the plate, from the focaccia style bread that was tender and soft but held together well, to the side of potato chips that were so light and crisp that Brandy couldn't stop stealing them from off the plate. 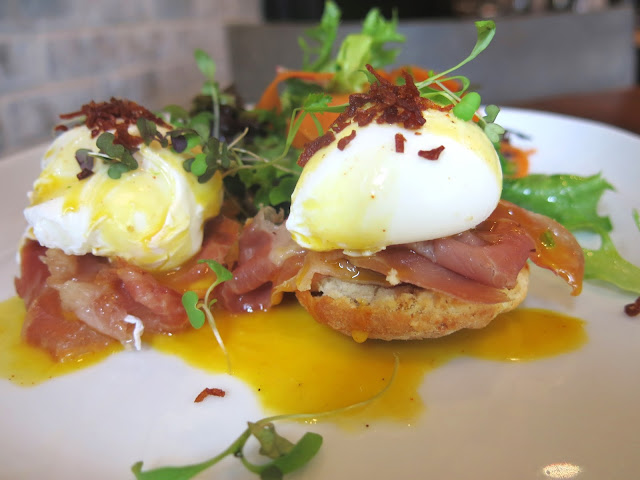 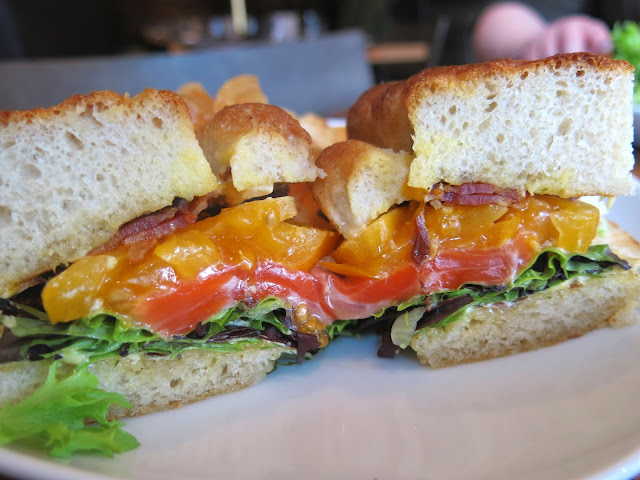 Finally, an infinitely elegant dessert was brought out, a Gingerbread Cheesecake with a Raspberry Balsamic Sorbet. The plate was almost too pretty to eat, with the vibrant pink sorbet contrasting beautifully with another little drizzle of green mint oil (the same used on the hummus, Brandy suspected). The mint oil actually made the cheesecake a bit too herby for Brandy's liking and din't quite match with the gingerbread crust. The meat of the cheesecake also had a slightly grainy texture that made the ladies furrow their brows as they pondered it. But the sorbet was good enough to have been served on it's own, with its assertive brightness and creamy texture perfectly paired with some crunchy and bitter cocoa nibs. 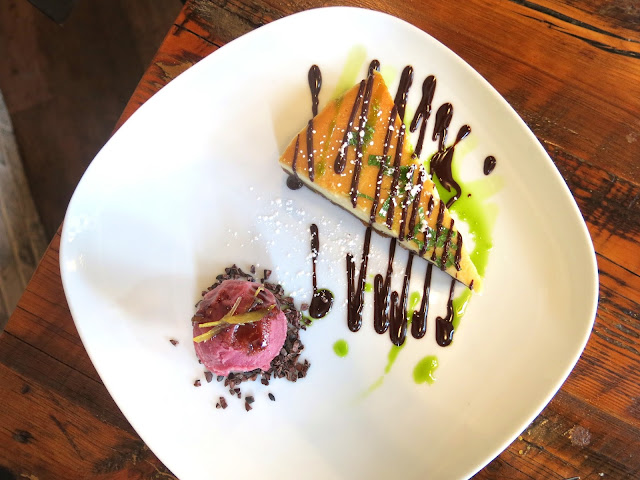 Though the meal wasn't perfect, Brandy and Starr found that their little road trip had been more than worth it to witness the inventive and unique dishes being created at Novo. The relaxed, yet refined atmosphere was perfect for getting one in the mood for a culinary adventure, while the friendly and un-intrusive service was also spot on. The prices were perhaps a bit more than the average brunch menu, but with the quality and intricacy of the dishes taken into consideration, they were more than justified. "I really do feel as if we've just walked through a museum of food just now," Brandy commented as they clambered back into the car. "All my senses are alight and I feel inspired!" "Inspired to do what?" Starr questioned. "Oh, I don't know... eat some more delicious food?" said Brandy. 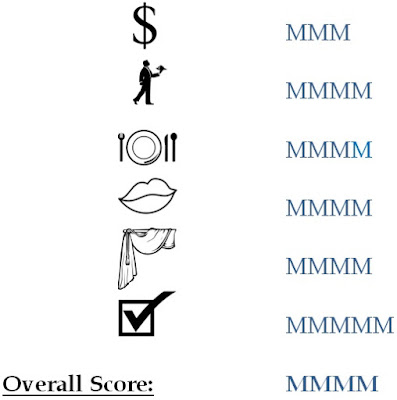