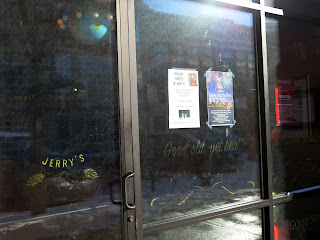 There was a time in the 1960's when Brandy had occasion to visit a certain area of California known as Haight-Ashbury. She had been told there was a terrific tea shop in this particular intersection from which she could buy almost any variety of loose leaf tea she could dream of. At a time before the internet made the acquisition of rare goods almost instant, this was quite a prospect. "They did indeed have plenty of varietals that excited me greatly," Brandy later recounted, "But there was an odd smell in that shop I could never quite pinpoint." During her time there, Brandy also became an unlikely fan of the kind of music being produced by the free spirited residents. "I used to be able to sit on the steps of the building I was staying in and hear guitars and tambourines all the way down the street. It was very lovely, though I do wish they could have played a little more ragtime or jitterbug every once in a while." 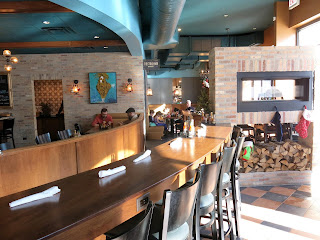 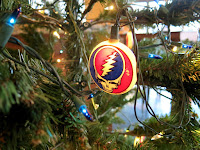 Remembering this had been a particularly happy period of Brandy's life, her good friend Mama Bee decided to take Brandy on a little adventure to a restaurant inspired by that very same spirit of freedom and discovery: Jerry's Sandwiches. Named after the leader of one of the biggest bands to come out of the psychedelic era, Jerry's boasts a menu of over 100 sandwiches with influences in flavor and composition from all over the country. Mama Bee figured this would be just the kind of place where Brandy might be able to find something really unique among a huge variety of choices, much like she had all those years ago in that little tea shop in San Francisco.

The Jerry's in Lincoln Square had an open, welcoming vibe with a fireplace off to one side and pops of teal paint on the walls to liven up the space. Nothing pretentious or fancy, but this was also not some hole in the wall deli. "It feels like the perfect kind of neighborhood place," said Brandy, "Where one can come in for a drink, a bite, and enjoy a game. It's rare in this day and age to fine a place that offers that kind of feel without trying to be something else as well." 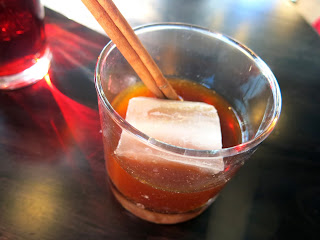 Speaking of drinks, Mama Bee chose the Abuelita's Old Fashioned to start off her meal. This fun twist on a traditional Old Fashioned was made with a Mexican vanilla bean infused syrup, chocolate bitters, and Mexican hot chocolate spices placed inside a cinnamon stick, so that when one swirled the stick around, the drink swirled into its final form. Both Mama Bee and Brandy (who was able to steal a sip while Mama Bee wasn't looking) loved this sweet and spicy concoction that had the aura of a spiced cider, but an almost creamy and smooth finish. Brandy went with the Leatherbone cocktail, as she has a great affinity for smokey drinks. This one combined bourbon, bitters, and a leather scented syrup in a bold, smokey cocktail that almost emulated puffing away on a cigar. "This is what you call a Sipping Cocktail," Brandy commented, "That is to say, it's something to enjoy over a long meal."

For their starters, Brandy and Mama Bee split an order of Fried Cheese Curds and the house special Corn Dogs, which every month were made with a different sausage at their core. The cheese curds were fairly standard for what they were, but well done with a melty interior and a lightly crisp exterior. The unique thing about them was that they could be ordered with a side of soup for dipping into, which in this case was a butternut squash bisque, working quite well for adding some more earthy notes to the experience. The corndogs were quite interesting, as this particular sausage was a Hungarian smoked sausage, which gave each bite a warmth and a burst of flavor. The sausage had been sliced into rounds and then coated in a cornmeal batter, deep fried, and served with a skewer in them, so they didn't exactly resemble fair ground corndogs, but thankfully, they didn't taste like them either. Brandy and Mama Bee got an extra joy from dipping them into a spicy honey mustard for an extra bit of kick. 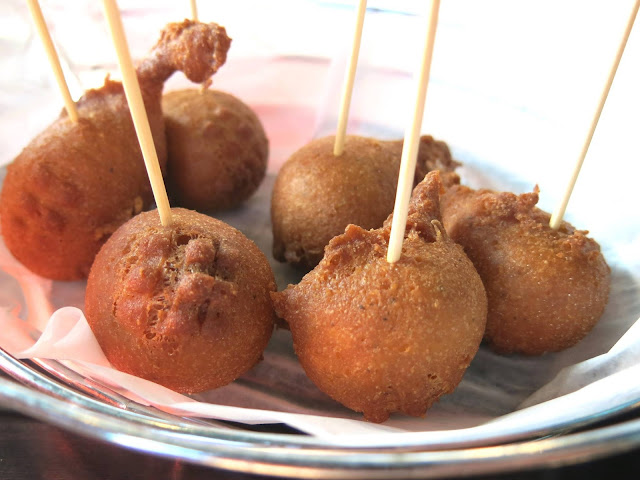 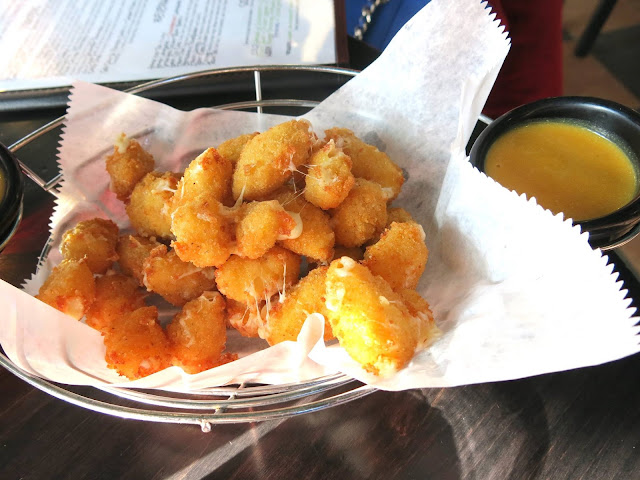 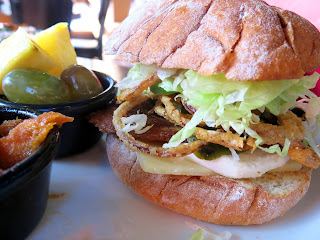 After a meaty and cheesy opening to their meal, Mama Bee decided to stick on the side of vegetation and ordered a sandwich called the Jenny F. Brandy was actually surprised by this, as Mama Bee has a somewhat low tolerance for heat, and the sandwich mainly featured green chilies and sliced jalapenos along with fried onions, fresh mozzarella, avocado, shredded lettuce, and a southwestern mayo (Mama Bee also added on some bacon because, as she put it, "Bacon makes everything better! Even vegetarian dishes!") all on a potato bun. The sandwich certainly packed a subtle punch that sneaked up on Mama Bee, but the avocado and the heartiness of the potato bun helped to balance things out. The veggies were all nicely crisp, the unusual combination or which made for something one doesn't often see in a mainly vegetarian sandwich. "Usually you see some tomato, lettuce, cheese, and that's about it," said Mama Bee, "I'm always glad to see the new and exciting ways people come up with for giving veggie fans more exciting options." 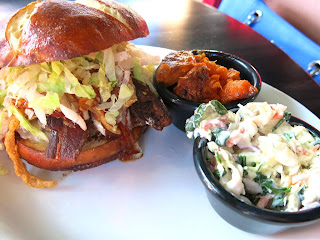 Brandy went in the opposite direction and ordered the Western Burger with a side of Cider Slaw and Caramelized Potatoes.  This meaty option came saddled with fried onions, bacon, cheddar cheese, ranch dressing, a house BBQ sauce, and some crispy shredded lettuce on a pretzel bun. With the onions and bacon coming in to play, the burger had a nice bit of crunch to it, which Brandy greatly enjoyed. The flavors of the various toppings and sauces all sort of vied for attention at once, like an overly talented ensemble cast in a movie, meaning the beef was not the central focus of the burger. Though she usually likes to be able to taste the meat of a burger first and foremost, Brandy didn't mind this one so much, as the various bold flavors all sort of worked well together.

"Even though I greatly enjoyed my burger, I have to admit that I'm quite curious about the 99 other options on this menu," said Brandy, "That's the problem with such a variety of choices. You'll always end up wondering what could have been." "Did you ever wonder what you were missing out on at that tea shop in Haight-Ashbury?" asked Mama Bee. "Oh constantly," Brandy replied, "There were all these bearded fellows in denim jeans and fringed vests who used to come in and ask for the 'special blend.' Yet when I asked for the 'special blend,' the owner told me he didn't think I would like it. From what I saw, it seemed perfectly acceptable to me, though he sold it pre-packaged in tiny little plastic bags... I never did get to sample it." 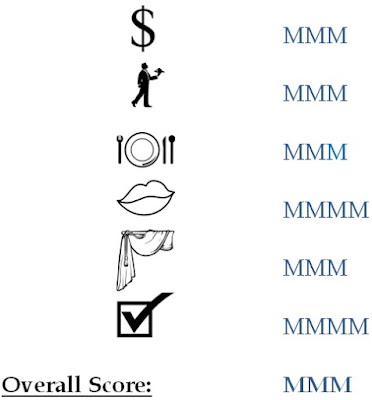