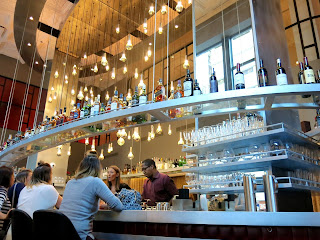 When Brandy last visited Commons Club in the (at the time, newly opened) Virgin Hotel, she was mightily impressed with the extensive and creative menu of tea based cocktails and the delightful sweet and savory bites in a rather chic, yet comfortable setting. "It's harder than one would think to find a good tea service now adays," as she likes to say, "Either they're too traditional or they're so off the mark that they're unrecognizable." 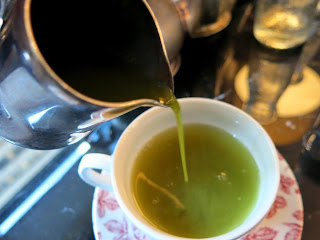 Hearing that the service had changed somewhat since her last visit, Brandy decided to grab her good friend Starr (otherwise known as Chicago Foodie Girl) and bring her along for some afternoon sipping and noshing.

The cocktails had been themed on the Seven Deadly Sins (a leftover from October, with a holiday transition due imminently) and rather than coming served individually, they now came in a much different form: each concoction is presented in a chilled silver tea pot with either liquor or champagne served on the side so that the drinker could customize the mix to their own liking. Each tea pot contained enough mixture for about two and a half cocktails, making the decision of whether to share a single pot or order a personal one the main dilemma. 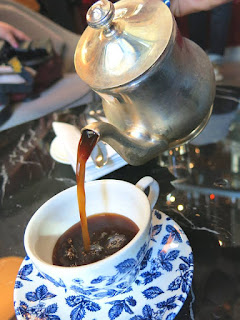 In the end, Brandy and Starr decided to order a different pot each so that they could switch between them. "We should have thought to bring more people so we could sample even more of these cocktails!" Brandy exclaimed. First, they tried the Gluttony cocktail, made with brown butter infused rum, chocolate syrup, a caramel flavor black tea from Rare Tea Cellars, with a peanut butter chantilly cream and a flask of champagne on the side. At first, the system was a little confusing to Brandy, but after she had mixed together the cocktail base and the champagne and added a dollop of the cream, she suddenly felt as though she were at a proper tea service, putting sugar and cream into her cup of strong black tea. The flavor of the cocktail was rich and decadent, especially with the cream, and did invoked the spirit of a certain chocolate and peanut butter candy, but in a very playfully sophisticated way. 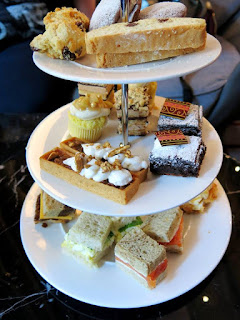 Secondly, they sampled the Envy cocktail, this time combining vodka with sour grape juice and a house made crabapple liqueur, all poured into a matcha green tea. This one was much more crisp and refreshing, yet still very bold in flavor. Brandy especially enjoyed the experience of pouring the evergreen liqueur into the tea and watching it swirl into a magical potion.

Of course, no tea service is complete without finger sandwiches, scones, and various nibbles. The food had certainly been stepped up a bit since Brandy's last visit, being upgraded from a two-tiered to a three-tiered service tray. The finger sandwiches remained, now represented in Salmon and Cream Cheese, Egg Salad, and a very English tasting Relish and Cheddar. Instead of the expected cucumber sandwich though, there was a bit of pita bread with a smear of spiced humus, a chunk of radish, and the aforementioned cucumber. 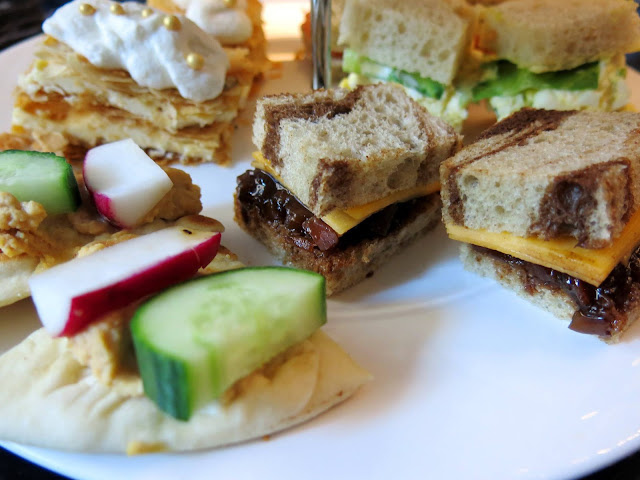 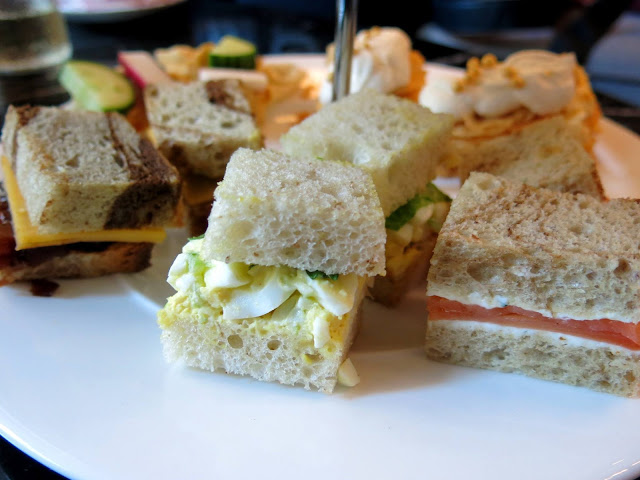 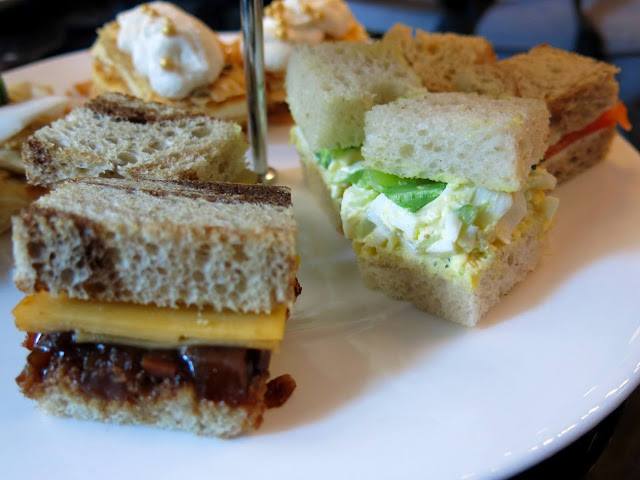 Moving on to the sweets, which were abundant, Brandy started easy with a soft and tender chocolate chip biscotti, then she nibbled on a delightful raisin dotted scone. The middle tier held a whole host of deliciousness, like fudgy brownies, gold dusted walnut tarts, scrumptious apple cinnamon cupcakes, and delicate chocolate praline opera cakes. Adorable gingerbread whoopie pies were a favorite, but perhaps the most interesting item was the apricot napoleons with mascarpone and crisp filo. 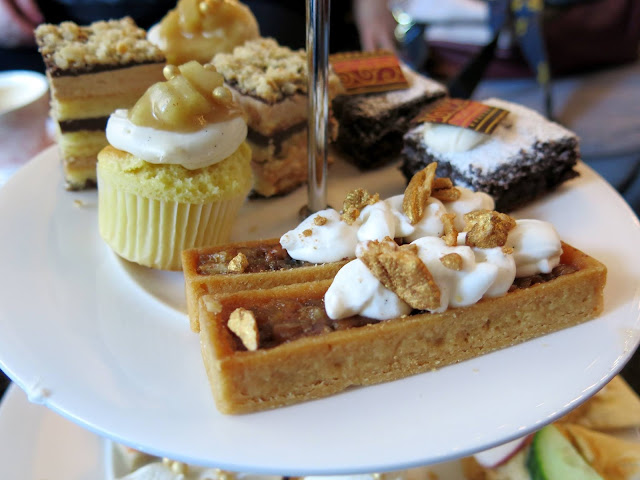 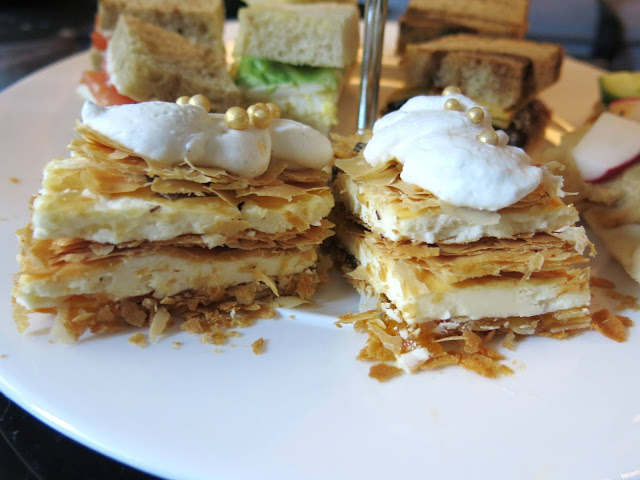 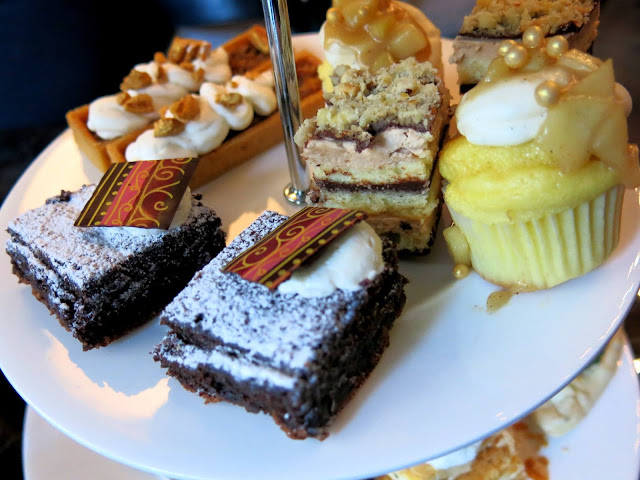 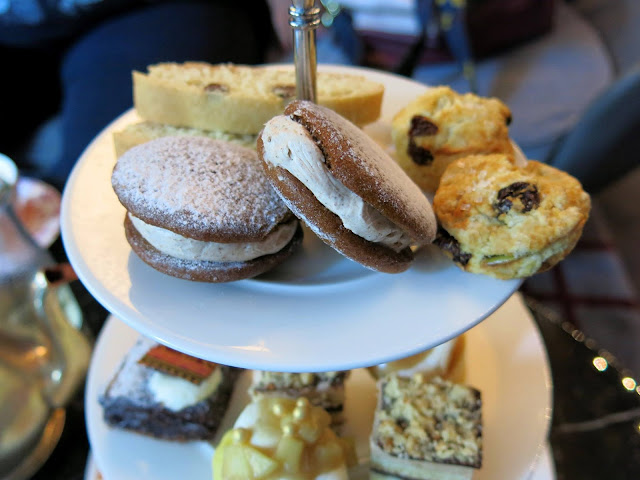 "There's a philosophy we live and die by back home," said Brandy, finishing her last little bite of cupcake with an indelicate lick of her fingers, "There's no problem a cup of tea can't solve. Well, when your tea contains a decent amount of champagne, I think that old adage is especially true."

The writers of this blog were invited to dine at the restaurant free of charge in order to facilitate the writing of this post.
Posted by Bunny and Brandy at 11:53 AM