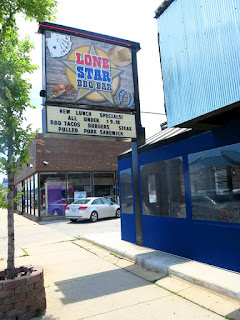 "Uggghhhh...," groaned Brandy's good friend Hawk after a long night.  Hawk had been testing his patented fireworks display for the upcoming holiday weekend and had gone into the wee hours of the morning trying to perfectly time his effects to a John Phillip Sousa medley.  "I just couldn't get the gold ones to explode when the tuba comes in," he yawned to Brandy, "And the red ones kept hitting the blue ones and making a giant purple starburst instead of the American flag."  "Perhaps we should get you some coffee," Brandy offered.  "Nah, the caffeine makes me too jittery.  Not good to have unsteady hands when one is dealing with fireworks."  "Well, then some protein at least.  Let's see... Oh yes, I've got a lovely idea!  After all, what's more American than consuming copious amounts of meat first thing in the morning?  Let's go get some barbecue!" 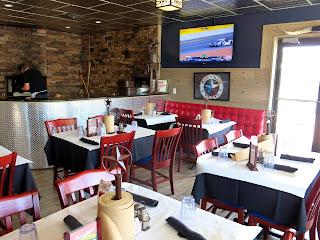 Brandy eyed up Lone Star BBQ Bar in the Dunning neighborhood for a little late morning pick me up.  Though an unusual choice for brunch, she felt certain that a little dose of slow cooked meats and Southern hospitality was just what Hawk needed.

The inside of Lone Star put them both at ease right away, as the Texas spirit was certainly evident in the decor of whimsical and Southwestern inspired signage, wrought iron fixtures, and country music being played throughout the space, as well as the unmistakable smokey aroma that permeated everything.  "And you know they're serious about their barbecue when you see something like this!" said Hawk, pointing to the roll of brown paper towels on every table. 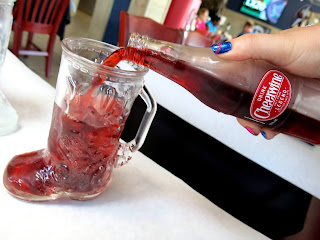 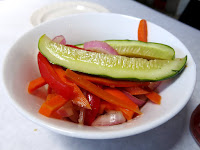 The first thing brought to the table was a bowl of house made pickled veggies, which Brandy and Hawk munched happily on while enjoying boot shaped glasses of Cheerwine (a regional favorite soda from The South with a rich cherry flavor).  The pickles were wonderfully sweet and crisp, making them the perfect snack while they waited for their meal to begin in earnest, and showcased early on that the folks at Lone Star were serious about doing everything in house and from scratch. 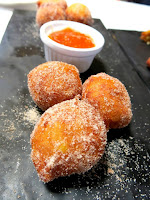 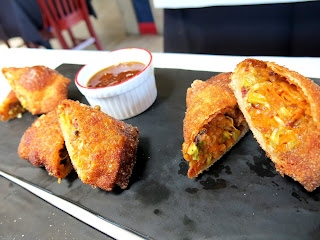 A pair of intriguing appetizers hit the table next: BBQ Egg Rolls and Corn Fritters.  The egg rolls, which contained a contained a combination of brisket, pork, and veggies in a peanut sauce, were a crispy delight.  Though containing a decent amount of meat, the filling actually let the veggies shine while lending a slightly smoky flavor, and the sweet and sour dipping sauce on the side tickled every one of Brandy's taste buds.  The Corn Fritters, which resembled giant donut holes, were actually a pretty sweet option, being coated in cinnamon sugar and served with an apricot jam.  The inside of the fritters was impossibly soft and succulent, being lighter than a donut even, and was dotted with little kernels of corn.  "I like that the jam is tangy, which takes these from being fluffy little sugar bombs to being a really interesting bite," Hawk commented, happy to have the carbs to help wake him up. 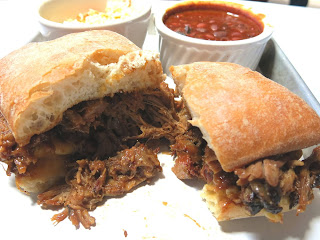 For his main dish, Hawk voted for the Pork 'n Mac sandwich with sides of BBQ beans and apple slaw.  The slaw had a crisp, bright flavor while firmly remaining on the sweet side without being overly pickley, and the beans had a great smokey flavor and a silky texture.  The sandwich, which consisted of pork shoulder topped with macaroni and cheese, was a substantial delight that instantly perked up Hawk.  "I know its just lack of sleep that's effecting me this morning, but this is the kind of thing that would instantly cure a hangover as well," he joked.  The meat wasn't overly saucy, meaning it's true smokey flavor wasn't masked in the least, and texture was so impossibly tender that it barely held together long enough to get it into one's mouth.  The mac and cheese when tasted on its on was certainly delicious, but seemed a gilding on the already perfect lily that was the pork. 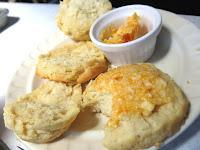 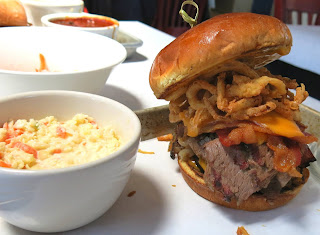 Brandy chose the Texas Two Step Burger, an indulgent sounding meat mountain with an 8 oz patty, smoked brisket, bacon, Merk's cheddar, and a fist full of crispy onion straws, all slathered in house made BBQ sauce (a bottle of which was brought to the table for any additional saucing needs).  "How on earth am I going to eat this thing?!" Brandy exclaimed when the sandwich was presented to her.  She eventually settled for smooshing everything down as much as possible and then practically unhinging her jaw to get it around the behemoth.  The burger was truly a testament to everything great about Texas style BBQ, from its over indulgent presentation to its incredibly flavorful and tender meats, and it showed that Lone Star BBQ was not just about gimmickry and flash, but absolutely knew what they were doing.  This was also evident in the simplest of sides, like the hand cut French fries and the buttery, flaky biscuits, served with authentically Southwestern cactus jelly (a favorite of Brandy's ever since she first sampled it as a child).  "I literally cannot imagine a more authentic way to experience this kind of BBQ outside of Texas," Brandy swooned, "I may not originally be from this country, but food like this makes me feel down right patriotic for the good old USA!"

With bellies full of meat (so much so that Brandy actually did the unthinkable and forgot to order dessert!), Brandy and Hawk headed out of the restaurant.  Along with the absolutely scrumptious food and the down home atmosphere, the charmingly friendly staff seemed to be the cherry on the proverbial sundae.  "What a pleasant surprise to have found a slice of Americana like this place just before Independence Day!" Brandy said cheerily.  "I thought your countrymen referred to it as 'Good Riddance Day,'" Hawk smirked.  "We used to," said Brandy, "But we've now reserved our ire to be directed at Europe rather than the colonies, apparently." 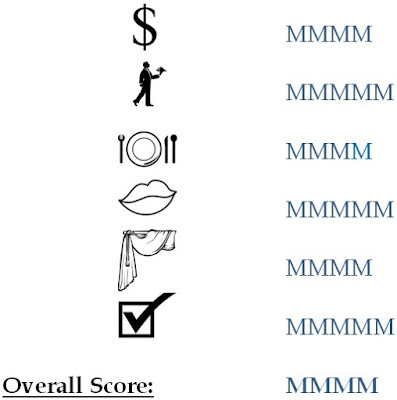