Dinner at Ugo's Kitchen and Bar 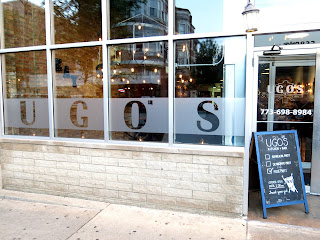 The unthinkable happened.  Brandy slept through brunch.  Her schedule had simply been so busy that she slept straight through the acceptable brunching hours and regained consciousness only after the only possible meal to be had was dinner.  Distraught at her own lack of an internal clock, she phoned her good friend Starr from Chicago Foodie Girl.  "Granted, I did get in at an ungodly hour.  My swing dancing class went late into the evening when the Glenn Miller Tribute Orchestra showed up half way through and played every song recorded in 1944.  But I haven't failed to wake up in time for brunch since Jimmy Carter was in office!"  To quell her panic, Starr suggested the two of them head out for a little dinner.  "Just pretend it's a very early brunch," she suggested.

They chose to visit Ugo's Kitchen and Bar in Logan Square, a young restaurant owned and operated by Chef Stephen Hasson, whose background is mainly in the most prestigious fine dining restaurants in Chicago.  Ugo's, named after Chef Hasson's beloved grandfather, opened last fall, serving Italian favorites made with the highest quality ingredients in a casual setting. 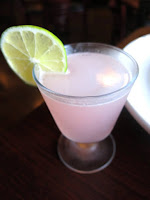 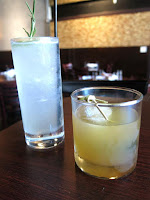 Of course, the evening began with a few cocktails.  Brandy went with the the tart and smokey Middleton, made with rye, cherry liquor, and lime juice, which she felt was an excellent sipping drink, while Starr picked the Vera, a refreshing and soft concoction made with gin, citrus, rosemary, and aloe liqueur with a slightly herbacious flavor, but they both agreed that the Blood Orange Daiquiri was their favorite with a refined sweetness and a stunningly delicious and delicate floral flavor from the addition of hibiscus. 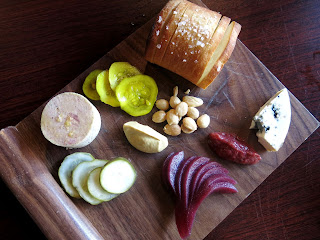 As they sipped their cocktails, they snacked on a charcuterie plate, which included a pork rillette, two types of pickles (dill and bread and butter), a pungent horseradish mustard, strawberry rhubarb jam, red wine poached pears, and warm salted ciabatta bread, all made in house, along with some marcona almonds and a mild Spanish bleu cheese.  The rillette was incredibly smooth and spread easily on the warm bread, while the spicy mustard perked up the taste buds.  The smooth and creamy bleu cheese was the perfect pairing with the the fruitier options on the plate, while the pickles (which Brandy usually dislikes) were sweet, crunchy, and absolutely delightful.  "This may sound silly, but with all the deliciousness on this plate, I am most loving this warm bread!" Starr admitted, "There's just something so good about a fluffy, sturdy, buttery bread, kissed with a little salt.  It just makes me feel happy." 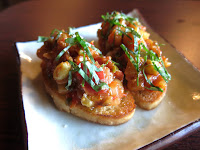 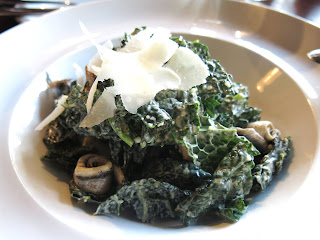 Next up, the two enjoyed the house Kale Caesar Salad and some of the Market Bruschetta.  The bruschetta had a very complex flavor that started off herbal and vegetative before ending on a sweet note, but was still very fresh tasting, having been topped with eggplant, olives, tomatoes, and capers.  "How very interesting!" Brandy exclaimed after the first bite, "This tastes exactly like sitting under the Tuscan sun in August!"  The salad was a nice twist on the classic Caesar with the kale giving it a more interesting texture.  The addition of filleted anchovies also added quite a punch of fishy flavor that would make any seafood addict swoon. 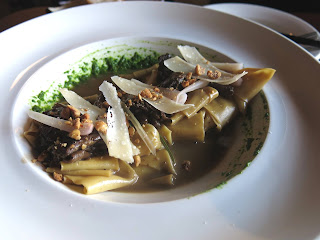 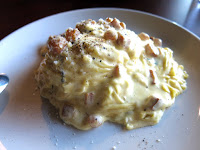 Following that, Starr and Brandy indulged in both of the pasta dishes on the menu, a Carbonara and a Pappardelle, both of which were prepared with house made pasta.  The Carbonara was incredibly creamy and decadent without being overwhelmed by the crispy pancetta, while the pasta itself was amazingly tender and delicate.  The Pappardelle had been dressed with maitake mushrooms, olives, hazelnuts, arugula pesto, and some shaved parmesan and was also impossibly tender and delicate while still holding up under the weight of all the other ingredients.  The flavor of this dish was very earthy, but a few pickled ramps helped to brighten things up.  "If that bruschetta was an afternoon in Tuscany, this pasta is an early evening in the forests of  Calabria!" said Brandy. 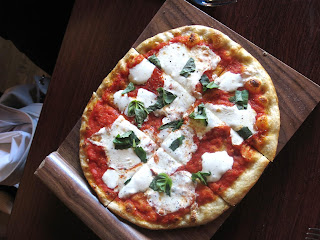 Now positively bursting, but yearning to see what else Ugo's had in store, the ladies sampled a simple Margherita pizza, done Neapolitan style with a thin and chewy crust.  The crust also had a wonderfully buttery flavor that Brandy and Starr liked very much, as it really let the simple ingredients shine, especially the house made mozzarella.  "I don't think I could eat another bite," Starr sighed.  "There's a dessert menu," said Brandy, pointing to the hand painted pizza paddles behind her with the list of sweets on offer.  "Alright, maybe I can handle another bite or two then," replied Starr. 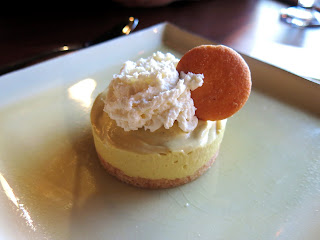 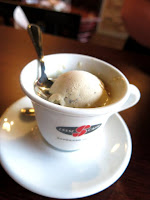 And so they ended their feast with a scoop of Cappuccino Chip Gelato and a surprising item for such a traditional Italian menu, a Banana Cream Pie.  The gelato (house made, of course) had a very strong coffee flavor that was not for the light of heart and came dotted with crispy little chips of bittersweet chocolate and espresso beans, making for a dessert that was much more adult and sophisticated than one would have thought upon first glance.  The banana cream pie, however, was the real surprise, as it's silky smooth texture was perfectly complimented by the cracker crust, which had just the right touch of salt in it to make it truly unique.

Even after missing out on a day's worth of brunch, Brandy suddenly felt much better about life after discovering Ugo's brand of handmade and high quality, yet rustic Italian favorites.  "The funny thing is, I never would have discovered this spot if it hadn't been for the fact that I slept past brunch," said Brandy, "It just goes to show you that sometimes things are just meant to be, and I was certainly meant to come and enjoy this meal.  Though I can't help wondering what a place like this could do with a brunch menu!"