From the Kitchens of Bunny and Brandy: Molten Chocolate filled Banana Bread 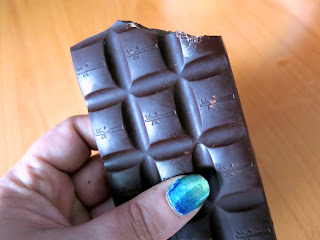 There's a few rules by which Brandy has lived her life, but chief amongst them being "Never fully trust someone who doesn't like chocolate."  The lack of chocolate appreciation in Brandy's eyes is tantamount to someone saying they don't like animals; there's nothing wrong with the preference legally, but the admission certainly makes the person seem a lot more suspicious. 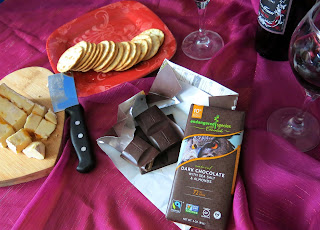 Brandy quickly developed an affinity for the dark chocolate bars, like the Salted Caramel and the Almonds with Sea Salt, in which one could really taste the depth of the chocolate flavor.  These bittersweet beauties were perfect for pairing with a fruity red wine and some brie for an after dinner snack.

But how to incorporate such intense chocolate goodness into brunch?  Well, Brandy looked to the Almond Spread with Cocoa for the answer.  This protein packed treat was the perfect consistency to become the molten chocolate center in a new twist on Brandy's favorite banana bread recipe, so she gave her little idea a whirl and it turned out spectacularly.  Find the recipe below and check out www.chocolatebar.com for more information on Endangered Species Chocolate.

The writers of this blog were provided with products by the mentioned company to facilitate the writing of this post. 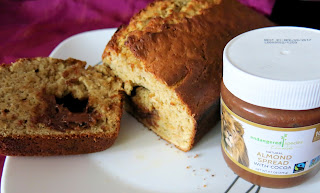 Preheat oven to 350 degrees and grease a loaf pan. 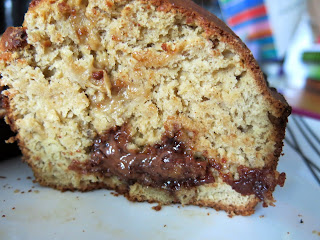 Mash the bananas with a fork, then add the eggs and mix.  Add the vanilla, maple syrup, brown sugar, and salt, and mix again until well combined.  Add the flour a little bit at a time, mixing to ensure there are no lumps, then add in the baking soda and mix one last time until everything is combined into a sticky batter.

Add half of the batter to the loaf pan, then bang the pan a few times on the counter to take out any air bubbles.  Carefully spoon in the chocolate almond spread into a long line down the center of the batter (this works best if the spread has been refrigerated before hand).  Cover the spread with the rest of the batter and bake in the oven 45-60 minutes, or until a skewer inserted into the center comes out without any batter on it (it will have chocolate on it, though, which is fine).  Let cool for 15 minutes, then slice and serve warm.
Posted by Bunny and Brandy at 10:59 AM