Postcards from Bunny: International Fusion Dinners at Nando's Peri-Peri and Beef and Barley

With the start of a new year, Bunny has made a vow.  "I know my dear husband Benedict will miss me while he is out at his various archaeological digs, but I feel I simply must do some more stopping into Chicago this year!  I do miss it so, and since I've left there has just been so much happening that I feel I have to spend more and more time each time I come back to catch up!  There doesn't seem to be a bit of nosh on this planet that I can't find in Chicago.  Also, I simply can't sit back anymore and let Brandy have all the fun!" 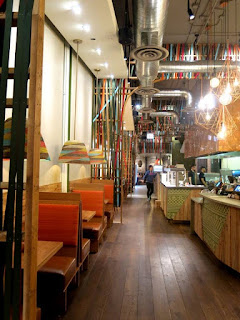 This all started out as an extended stay to finish up some Christmas shopping and ended up as a mini culinary tour of the world as Bunny dined in spot after spot, letting her various cravings steer the way for where to go next.  While out on Michigan Avenue one night, Bunny was struck by an intense craving for "A cheeky Nando's," as she put it.  Nando's Peri Peri had recently made its debut in Chicago with several location from Lakeview to Lincoln Park to The Loop, serving up South African style chicken and a variety of unique sides, sauces, and more.  Though not originating there, residents of the UK especially seem pretty fond of the fiery chicken and its accouterments, referring to the practice of heading out for a late night dinner after a bit of drinking as going for a "Cheeky Nandos." 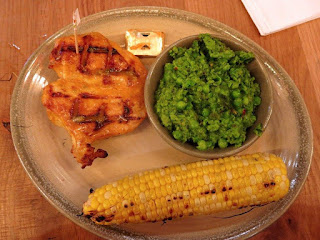 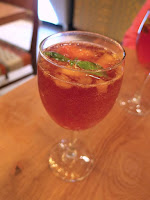 Straight away Bunny was infatuated with Nandos and its beautiful interior.  Stopping into the newest location in Chicago on Wabash, she was greeted by a variety of vibrant colors, whimsical lighting, and a smiling employee who quickly went over the menu with her.  Bunny opted to try a flame grilled chicken breast with a mild, yet flavorful Mango Lime glaze, which was cooked to perfection.  On the side, she tried some flame grilled corn on the cob (which on such a wintery evening made Bunny smile with the thought of summer) and some of Nandos' signature Macho Peas with mint and chili flakes (which were not only extremely flavorful, but also such a beautiful shade of green that Bunny immediately took a picture of them, saying, "This is exactly the color I wanted for my kitchen!").  Along with the food, Bunny indulged in a bit Mango Sangria, which was wonderfully bright without being too sweet.  "So very happy to see that Nandos has made their way to Chicago!" Bunny exclaimed, "It's a comfort to know that when I'm in a cheeky mood, there will always be a bit of cheeky chicken just down the corner." 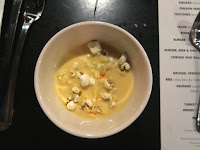 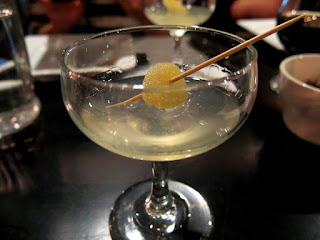 Continuing a few nights later, Bunny stopped into Beef and Barley in West Lakeview to sample their menu full of international fusion dishes condensed into a gastro-pub style experience or shareable plates and craft cocktails.  Beginning with a few cocktails, Bunny favored the Victorian style punches as well as a little something called the Red Ryder made with whiskey, pomegranate molasses, citrus juice, bitters, and topped with Half Acre Daisy Cutter, and also the Spiced Kessel Rum cocktail with cinnamon, clove, and candied ginger. 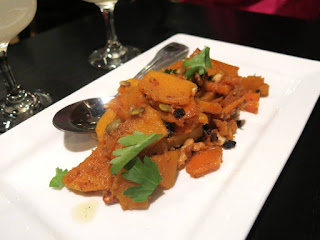 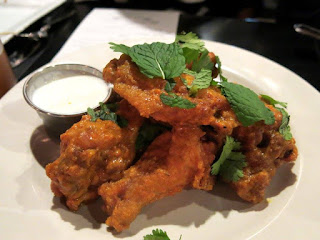 needed some food to accompany all her drinks, Bunny started out with a few smaller plates, her favorites of which were the creamy and rich beer and cheddar soup, garnished with smoked paprika oil and popcorn as well as the tikka masala wings, a brilliant Indian twist on a traditional American bar food, served with a ginger yogurt sauce to cool things down.  Moving on to some more substantial fair, Bunny indulged in a beef al pastor taco with pineapple and red onion, the followed it with some tonstones (or fried plantains), which had been paired surprisingly well with some fennel, pickled apple, and grapefruit, and then snacked on some succulent butternut squash with brown butter and smoked trail mix for crunch.  Lastly, she enjoyed a taste of some more entree like dishes, like the Corned Beef Rillette, which resembled a deconstructed Reuben sandwich with toasted rye bread, sauerkraut, pickles, whole grain mustard, a spreadable corned beef, and some horseradish cream, then the oddly delightful Turkey Schnitzel topped with kimchi and a fried egg, and finally the house burger, dressed in Merkts cheese spread, American cheese, caramelized onions, pickled red onion, a single large onion ring, and held together by a tender buttermilk biscuit as a bun. 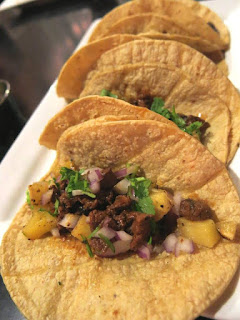 "Oh goodness, the food scene in Chicago has evolved beyond my wildest dreams since I've been gone!" Bunny giggled as she headed home for the night, "If one can go to a bar and sample foods from everywhere from South America to South Korea or even go for a simple, quick meal of chicken and veggies and have it be a little more exciting and exotic than just your average fast food meal, then there must be so many good things on the horizon here in Chicago.  Sorry, Benedict, my dear, but Bunny is staying in town!  Oh dear, I really shouldn't have made this decision right before the dead of winter..."

The writers of this blog were invited to dine at the restaurants mentioned free of charge in order to facilitate the writing of this post.