Farmhouse or Old McBrandy had a Brunch 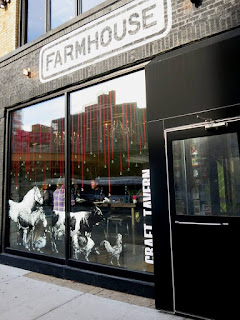 People often ask Brandy "Why brunch?" and though she has a myriad of reasons, one of the main ones is that she has always felt that one can only truly judge a restaurant by its brunch service.  "I always say, if dinner is the plot of any restaurant, then brunch is the subtext," as Brandy puts it, "There's the face they want to present, and then there's the real heart of a place, so when I go to a lovely dinner, I can't help but wonder what is really at their core, the same as you never really know a person until you've seen them fully relaxed."

It was this point that Brandy was trying to explain one day to her dear friend Mama Bee.  "But surly, a restaurant could be judged on its dinner service alone," Mama Bee argued.  "Of course it could be, but I've found that even the places I really enjoy the most sometimes take themselves a little too seriously at dinner, while letting their playful sides out more at brunch.  It's difficult to explain, I suppose.  Hang on, I've had a place on my mind ever since I had a fantastic dinner there a few months ago.  I remember thinking that I loved the food immensely, but I wanted to come back for brunch to see how their relaxed attitude and rustic dishes translated into a more casual meal.  Let's go for a little brunch at Farmhouse and you'll see what I mean." 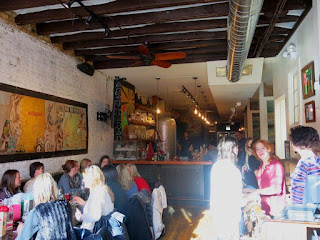 Farmhouse had the same homey, rustic atmosphere Brandy remembered.  The warm woods and whimsical touches gave the place a lively feeling, and though the seating was a little cramped, it wasn't uncomfortable.  Brandy especially loved that a good amount of the decor had been created from salvaged parts of other bars, like the charmingly mismatched stained glass windows that served as patricians in different parts of the dining area. 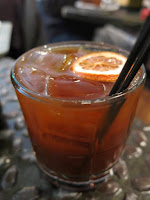 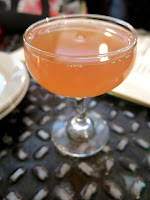 The meal began with a couple of cocktails; the Morning Bender for Brandy and a Pink Mimosa for Mama Bee.  The mimosa was fairly traditional, more champagne than juice, but light, crisp, and refreshing.  The Morning Bender, a mix of coffee, whiskey, and blood orange, was rich and smooth.  Brandy had expected it to be a bit more sweet, but rather liked it regardless. 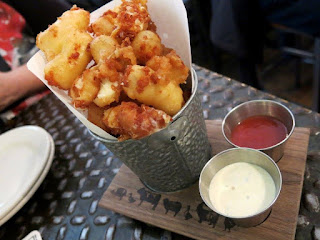 Kicking off the food, Brandy and Mama Bee went in for an order of Cheese Curds.  The curds had been beer battered, lightly fried, and came served with some house made catsup as well as a spicy curd sauce.  The little morsels of cheesy goodness were perfectly crisp on the outside and melty on the inside and the sauces were both a perfect compliment to each other and the richness of the cheese.  "Oh, these are just delicious!" Mama Bee exclaimed, popping one into her mouth, "You know, I never knew what a cheese curd was until I came to Chicago, but it's things like this that make me sad that I spent a good portion of my life without them!" 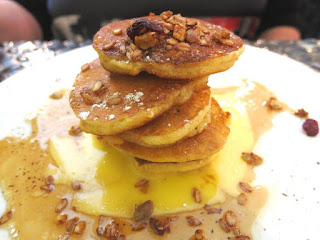 Mama Bee chose the Hoe Cakes for her entree, which were dressed with lemon curd, spiced nuts and oats, and maple syrup.  Mama Bee was at once in love with the cakes, which were a textural delight.  Not light and fluffy like a regular pancake, these was a little more dense and velvety.  The nuts on top not only made for a nice bit of crunch, they also added a lovely kick of spice that really set off the sweetness in the lemon curd.  "I was a little worried that it would be too sweet or too sour, but these are just perfect!" said Mama Bee. 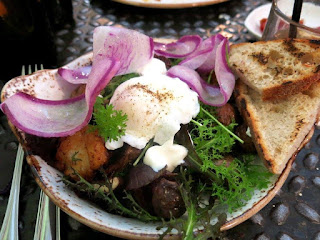 Brandy went for the Crispy Root Vegetables, a mix of potatoes, mushrooms, sunchokes, and radish topped with an egg and served with some home rustic toast on the side.  The vegetables had a wonderful crispness to them with a surprising lightness for so much starch.  Though the dish itself was rustic, the thought behind it was so complex that Brandy was truly impressed.  What might have been seen as a simple garnish of greens and tinly sliced radish actually served the flavor just as much as providing some vibrant pops of color, and the egg on top actually served almost as a sort of sauce for the vegetables below.  "This is just the kind of dish that I love," Brandy said, "Something so simple that you wonder why others aren't doing the same thing, but something also so individual to the restaurant serving it that it's hard to picture it being recreated anywhere else." 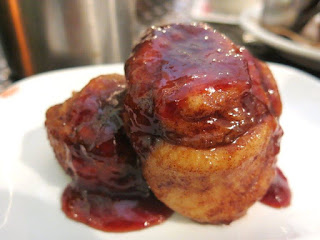 Not wanting to end such a pleasant meal quite yet, Bunny and Mama Bee indulged in one of the house made sticky buns topped with fresh strawberry jam accompanied by a pot of fresh pressed coffee.  The sticky bun was a little hard on the outside, but the jam on top of it was truly exceptional, making the pastry the perfect mate for the strong coffee.

The friendly, relaxed service, the non pretentious atmosphere, and the fair pricing was enough to make Brandy fall in love with Farmhouse even more than she already had, but the quality of the food (most of which had been sourced from the restaurant's own farm, and if not from there, then from other local purveyors) and the real attention to detail in the presentations were what made this one Brandy's favorite brunches in a long while.  "Well, I can honestly say I see your point now," Mama Bee sighed with contentment, "While a place may put on a few airs and talk things up a bit at dinner, you don't really feel the heart of it until you go for brunch."  "That's exactly why I do this week after week.  I don't want to just go somewhere and then immediately forget about it, I want to get to know them like I would a new friend, and I've always found that the best way to get to know a person is over breakfast in their own home." 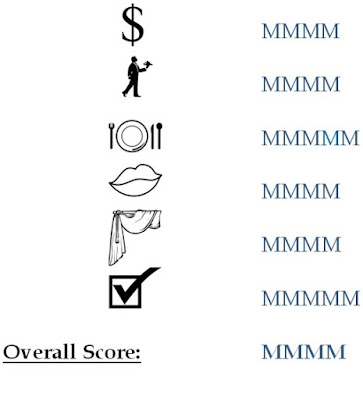