Yard House or The Curse of the Empty Stomach 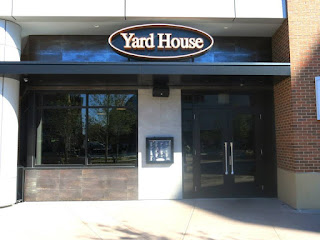 There are many reasons that Brandy brunches, but up until recently, she has kept one of the darkest reasons to herself.  But after seeing The Cubs struggling in the playoffs, the guilt began to eat away inside of her and she found she simply had to confess her sins to someone.  Her dear friend Brocco Lee Binto was taking a break from one of his many scientific experiments, so she decided to sit down and tell him the tragic tale.

"The last weekend I didn't brunch was back in 1945," she began with a sigh, "I was visiting Chicago for one of the first times and I was simply too excited to do and see everything.  I barely even knew what baseball was back then, but I knew something special was going on at the ballpark, so I bought a ticket with my brunch money and went to the game.  And that was the last time The Cubs went to the World Series.  Everyone told me not to alter my routines while they were winning, but I didn't listen!  I didn't know!"  Brocco gazed at her, sympathetically.  "Oh Brandy, I'm sure that has nothing to do with it.  Superstitions don't have any scientific basis, so-" "Wait!  What time is it?" Brandy interrupted him.  "Nearly noon.  Why?"  "Quick!  We have to get to brunch!  I'm not going to be responsible for ruining the city's chances at a championship again!" 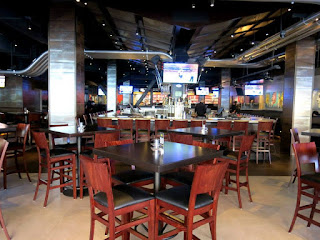 They headed to Yard House, the recently opened Chicago addition of the successful craft beer focused sports bar concept, since Brandy said she needed to be able to surround herself with as many games as possible to keep the curse at bay.  Yard House was open and spread out across a massive ground level space, a rarity in Chicago where restaurant real estate is at a premium.  The decor was mainly darker woods with colorful art, which made things feel comfortable, but didn't take away from the main focus of the many clusters of television screens surrounding the large center bar. 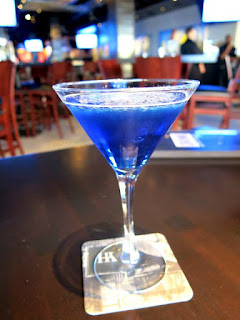 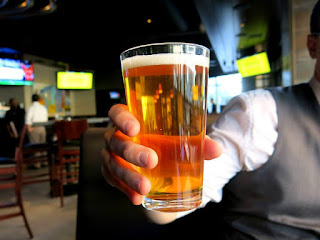 The morning began with a few cocktails for Brandy and a few beers for Brocco.  The first cocktail, the Black Orchid, was pretty stunning to behold for its electric blue color.  "Since blue is one of The Cubs' colors, maybe this will help," Brandy muttered, making Brocco shake his head.  The cocktail made with raspberry vodka, watermelon schnapps, and blue curacao was fruity and a little syrupy, but not sickly sweet, and was just as pleasant to sip as to look at.  Of course the second cocktail had to have some red in it, so Brandy ordered the Strawberry Bourbonade which was fresh, strong, and perfect with the food.  Brocco opted to try a couple of the hundreds of beers on offer, starting off with the Butterfly Flashmob, a citrusy IPA from Naperville based brewery Solemn Oath, and then followed it up with a Bell's Grapefruit IPA, both of which were quite delicious. 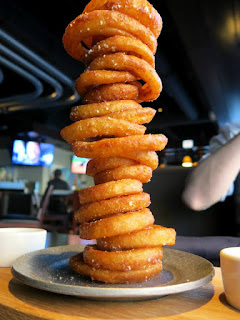 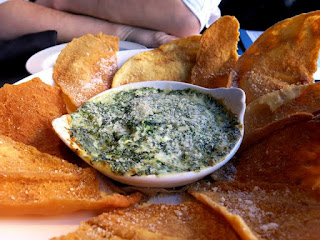 Being terrified of feeling any amount of hunger, Brandy ordered up two appetizers; the Spinach Cheese Dip and the Onion Ring Tower.  The spinach dip was creamy, salty in a good way, and satisfyingly cheesy.  Brandy liked that the dish came served with crispy pieces of a rather unique flat bread, which added a lovely crunch to each bite.  The onion rings had a rather dramatic presentation, being stacked on a long spike and served with a choice of chipotle ranch or buttermilk ranch for dipping.  The crunch on the rings was just perfect, the batter being a light and even texture without being greasy. 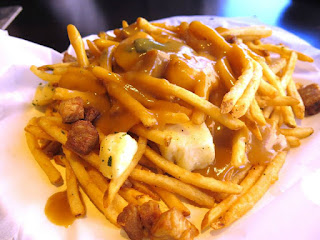 "It's still not enough!" Brandy had said when ordering her entree, "We need to make sure neither of us are craving food for the rest of the day.  Oh look!  A poutine!  We'll split that."  "But..." Brocco began to protest, but Brandy had already ordered the thing before he could say more.  The Pork Poutine was actually fairly traditional, which was refreshing to Brandy, as she has seen far too many overly creative poutines as of late.  The thin cut fries didn't have quite enough substance to remain crispy under the gravy coating, but the little chunks of pork helped to live up the texture.  Brandy could have done with a few more cheese curds in the mix, but over all the poutine really hit the spot, 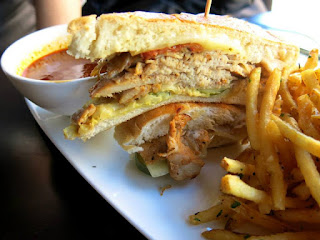 For his entree, Brocco picked the Cuban Roast Pork Dip, a sort of combination of a French dip and a pressed Cubano sandwich.  Brocco found the flavors to be a little toned down from their originator (for instance, the pork was a little under spiced) so as to be a little more palatable to an American bar crowd, but the dip that accompanied the sandwich was rather special.  Brocco also enjoyed his side of Truffle Fries, which were thin, light, and crispy with a good hit of truffle oil. 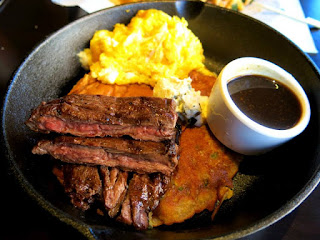 Brandy's main course was the Steak and Cheesy Eggs, which came served in a skillet with a grilled corn cake and a sweet teriyaki like glaze.  The skirt steak in the skillet was cooked to perfection and tasted splendid when dipped into the glaze.  The eggs had a nice dense texture, which Brandy prefers in her scramble, and plenty of cheesse.  The corn cake at the bottom of the skillet was the real surprise, as it was loaded with actual sweet corn and had a soft, melt in your mouth texture that Brandy really savored. 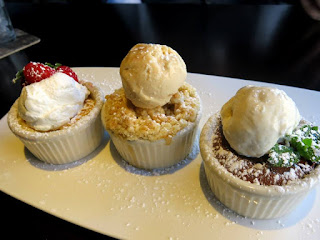 "Well, I think that'll do it," Brocco said.  "Oh no you don't!  There's still dessert!" proclaimed Brandy.  To get a little more bang for their buck, so to speak, Brandy ordered them a Mini Trio Sampler, which came with miniature versions of the chocolate souffle, the lemon souffle, and the peach and apple cobbler, all topped with ice cream,  The chocolate souffle was pretty dense and rich, while the lemon souffle was light, airy, and bright.  The cobbler, which came served with caramel ice while the other two came with vanilla, was dense, warm, and perfect for fall.

Though full to the brim, Brandy felt a bit better after she'd enjoyed her tasty, hopefully curse breaking brunch.  The friendly service and thoughtful presentations helped to put her at ease as much as the food and drinks did, so much so that she began to reconsider her long held belief that it was her empty stomach that had caused the long drought for The Cubs.  "Perhaps you're right," she sighed to Brocco, "It may have just been coincidence that the one weekend I haven't brunched in the last century happened to be the same weekend the Northsiders faced off in their last World Series game."  "Of course its coincidence!" Brocco laughed, "I'm happy you've finally accepted that."  "It was an extraordinary game, that match in 1945," Brandy grinned, "Almost worth skipping brunch for.  Do you know some silly man tried to sit next to me with his smelly pet goat?  I'd never seen such a thing in my life!  If I hadn't complained to the staff and had that man and his beast removed, I don't know if I would have been able to sit through the whole game with that animal bleeting beside me."  "Oh dear..." said Brocco. 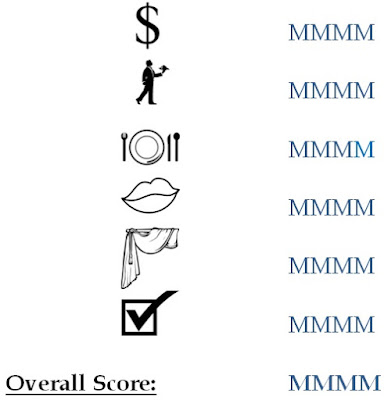