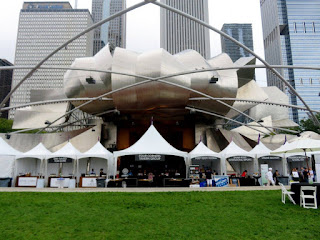 On Sunday morning, Brandy awoke to a feeling of pure excitement.  No, it wasn't because she was preparing to attend yet another fabulous brunch, it was because this was the day she was going to Chicago Gourmet, the catalyst of the food festival season, where every restaurant worth their pink Himalayan sea salt turns up with something new, exciting, and bite sized.  "It feels like Christmas morning," she said, taking a deep breath of the cool, but humid early fall air, "Only this time, Father Christmas has left a seven course meal under the tree instead of some useless trinkets!" 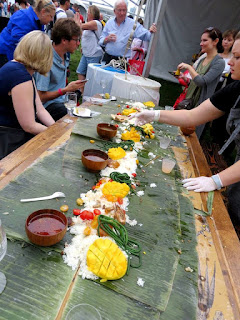 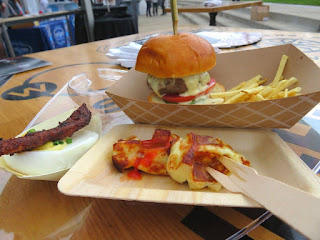 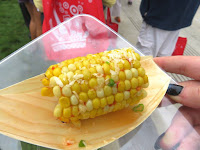 Jumping right into the thick of the festival at 12:00 sharp, Brandy stopped by the Four Corners Tavern Group tent, where they were serving up Moscow Mules in mini copper mugs as well as three pretty unique dishes: deviled duck eggs with bacon, Wagyu beef sliders, and waffled cheese, the latter of which Brandy found had an extraordinary texture that had her craving a second bite.  "No time for second helpings though!" she proclaimed, "Onward!"  Gibson's Restaurant Group also had their own tent, serving their usual array of crowd favorites like shrimp skewers, watermelon salad, and filet mignon sliders and Rockit Ranch served just one dish and drink at a time, but rotated them throughout the day, Brandy's favorite of which was a coconut street corn and the Strawberry DNA cocktail, which tasted fresh as a summer's day. 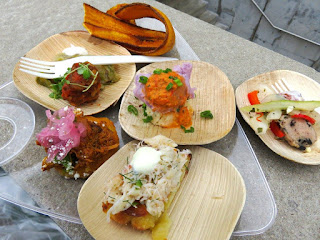 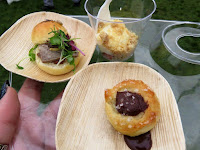 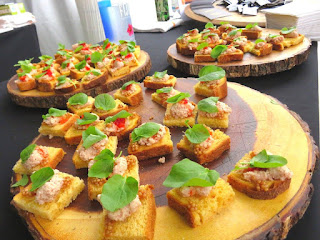 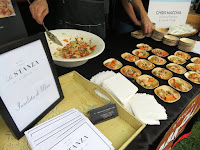 At the larger tasting tents, Brandy quickly found lots of tasty treats.  Chef Matt Troost brought a duo of dishes that Brandy was head over heals for; from The Charlatan sweet corn grits with chicken thigh in tomatillo sauce, topped with Pequin hot sauce, pepitas, and cilantro, and from Three Aces whipped mortadella with pickled mustard seeds, pepper jelly, and watercress on house made sweet potato bread.  Artisan breads seemed to be all over the place with other dishes like Bittersweet Bakery serving both sweet and savory versions of their brioche (one with bittersweet chocolate and one with duck pate and mustard) and Sarah Gruenberg previewing her up coming restaurant Monteverde with a spicy njuda with pickled radish on ciabatta.  Seafood was another star of the show (even aside from the Supreme Lobster & Seafood Co. tent, which always boasts the longest lines at the festival) with both Arami and Salero presenting octopus on their plates (a poached Spanish octopus, Japanese seaweed salad, tobianjian vinegrette, pickled red onion and shiso, and an octopus escabeche with puffed grains respectively), while The Promontory and MK served tuna dishes (oak seared tuna, smoked watermelon, chewy tomato and basil gel, and raw tuna sashimi with roasted corn relish) and Longitud315 and Pump Room featured crab (blue lump crab meat, purple peruvian potatoes, avocado and guasacaca sauce, and shredded crab and tomato on brioche).  New this year were several worldly themed tents, including the Mexican Pavilion and the Italian Invasion.  It seemed the idea was more to invite restaurants of those persuasions rather than for all of the dishes to match the theme, such as Acanto bringing along gigantic salted caramel apples to the otherwise pretty Italian flavored dishes, which while delicious, were unfinishable when considering how much more there was to taste. 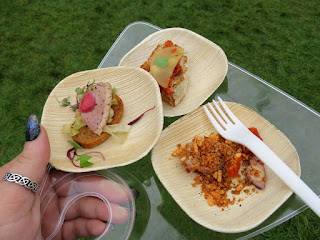 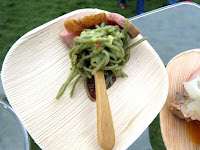 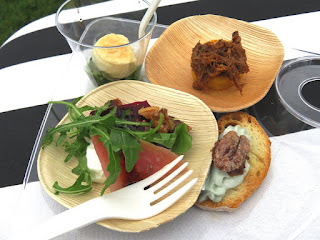 Brandy's favorite bites of the afternoon were certainly some of the most creative.  Dusek's brought a cauliflower and almond purée, smoked Trout roe, pickled chanterelle mushroom and a corn tuille that was an absolute delight in texture while hitting every different kind of taste bud.  Cooper's Hawk Winery had a roasted beet and goat cheese salad with arugula that was pleasantly refreshing among so many other rich dishes.  Longman and Eagle put their own twist on a traditional Reuben with some duck pastrami while Park Grill brought smoked pork "wings" with sweet corn uchepo and peach mostarda. Marion Street played to the season with a pumpkin soup with celery root and maple manchego crème fraiche and Kinzie Chophouse featured a pumpkin polenta with braised short rib.  Perhaps Brandy's favorite bite of the entire festival came courtesy of City Winery with their seared ​5 spice duck with green tea soba noodles​ in a curried coconut-peanut dressing & amarena cherry-lychee compote, adorably presented wrapped around a small wooden fork. 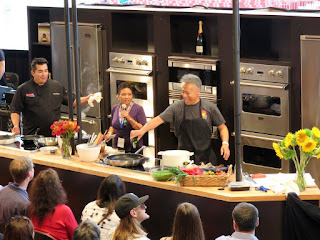 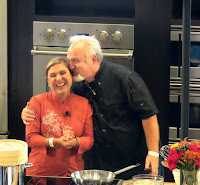 Hitting the midday wall, Brandy went over to the main stage to take in a few demos.  Art Smith and Lorena Garcia served up plenty of sass while they combined forces to create a shrimp and tamale dish that perfectly fused Southern American and South American cuisine.  "Pretty makes it taste better," was Art Smith's mantra as he sauteed his shrimp in a tomato sauce, telling the crowd that he and his "culinary wife" would soon be returning to television in an episode of a new Bravo show.  Following that, Jose Garces and Takashi Yagihashi took the stage for an Iron Chef style battle, in which each chef brought a customized basket of ingredients for the other to create a dish with.  Chef Takashi had the idea to use the abundance of seafood in his basket to make a paella, but after it was pointed out to him that the contest had to be finished in 30 minutes, he said the dish would probably be more of a risotto, while Chef Garces used his basket to make a Korean style bi min bop bowl. 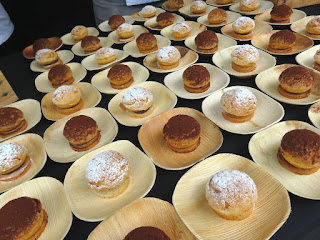 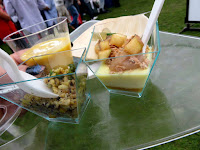 Moving to the sweet side of things, the Dessert Pavilion seemed a bit smaller than years past.  Firecakes brought an array of their signature donuts, while Coffee Cake Connection handed out their gluten free cinnamon coffee cake.  Eli's Cheesecake presented their original cheesecake made into a sabayon with peaches and almond streusel and Sandra Holl from Floriole Cafe & Bakery brought a cheesecake mousse with hibiscus soaked apples & almond crumble.  Scott Green from Travelle at The Langham, who create one of Brandy's favorite sweets from last year, didn't disappoint with a cream puff and sable cookie sandwich with chocolate ganache.  Outside of the designated dessert tent, Brandy adored the apple cider gelee and sage pot de crème with apple butter, altoids compressed apples, and sage white chocolate rocher from Homestead on the Roof and the S'mores cone with peanut butter and banana from Big Green Egg.

And so another year of Chicago Gourmet wound down to its inevitable conclusion and Brandy stumbled out of the park with sore feet, a full belly, and a smile on her face.  "Ah, Chicago Gourmet, I cannot wait for the magical weekend next year when you once again appear from the mists like Brigadoon and bring forth all that the Chicago food scene has to offer," Brandy sighed, "But in the meantime, I think I'm due for a long nap."

Remember to check out our Facebook Page for tons of pictures from this year's festival!

The writers of this blog were invited to attend Chicago Gourmet free of charge in order to facilitate the writing of this post.
Posted by Bunny and Brandy at 11:26 AM