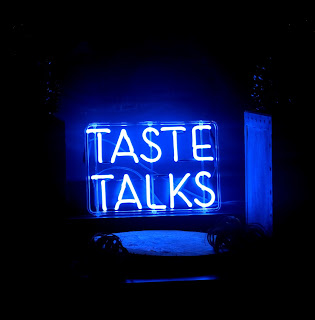 Food and Wine was relaxed and intimate.  Chicago Gourmet was buzzing and extravagant.  But Taste Talks is the one food festival that puts the emphasis on learning more about one's food.  For the second year, Taste Talks came to Chicago with a weekend of events and panels that aimed to educate foodies on various food issues so that they can cook at home and eat out more mindfully.  Brandy was pleased to attend again this year, especially since there was lots of new events and chefs involved. 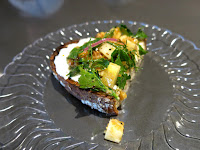 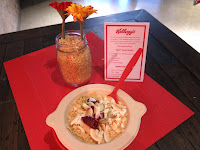 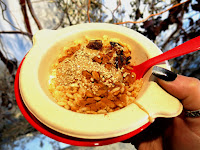 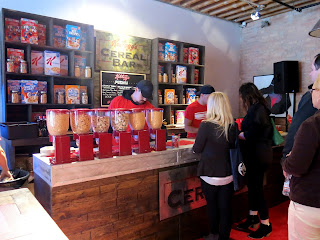 Brandy started off her Taste Talks weekend on Saturday morning at the Morgan Building on Fulton Market.  Since the talks began bright and early, Brandy was happy to see some snacking options provided by Kellog's and Publican Quality Bread.  At the Kellog's Cereal Bar, three chefs had been enlisted to come up with creative toppings for classic cereals.  Brandy tried two of the three varieties: the Rise and Dine from Chef Jessica Koslow with Rice Krispies and Frosted Flakes, then green tea powder, candied ginger, raspberry jam, toasted coconut, and coconut milk, and the I Dream of Tahini from Chef Kristina Mack with Rice Krispies, tahini, honey, sesame seeds, fig, and cinnamon.  "I'm not usually one to have cereal for brunch, but this kind of creativity is rather inspiring," Brandy commented.  In another section of the building, Publican Quality Bread (the baking off shoot of Publican Quality Meats) hosted a toast bar, topping their high quality bread with interesting flavor combinations.  Brandy sampled the Cypress Grove Toast with goat cheese, apples, urfa pepper, and pine nuts, which again sent a spark of creativity through her brain.  Throughout the day, more snacks popped up, like coffee and tea from Intelligentsia, beer from Goose Island, and donuts from Longman and Eagle, keeping Brandy fully fueled and energized for the panels. 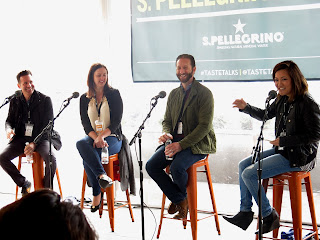 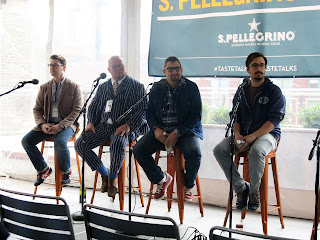 First up, Brandy attended a talk about the current state of food media with panelists Amy Cavanaugh from Time Out Chicago, Ari Bendersky, and Steve Dolinsky from ABC7.  For a talk about how food media is evolving, Brandy would have liked to have seen a food blogger or two on the panel, as the talk mainly focused around how even professional food writers have to do a certain amount of social media in order to stay in touch with their industry and audience.  Despite this, Brandy found the talk extremely interesting and agreed with a good majority of what was said, especially about a tendency for professional food writers to be a little too harsh, while bloggers tended towards too much enthusiasm in their reviews.  Next up was a panel on using the entire animal in butchery with a very distinguished panel that included Chris Cosentino and Fergus Henderson, plus local butchers Cosmo Goss from The Publican and Rob Levitt from Butcher + Larder.  When Chris Cosentino, who has made a name for himself using offal in his dishes, revealed that his mother to this day refuses to eat his food, Brandy had to laugh, but when he explained this was due to a generational prejudice against odd cuts of meat that stems back to WWII rationing, Brandy exclaimed aloud, "Ah!  That makes so much sense!" 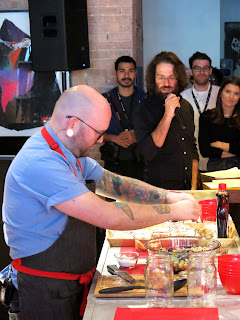 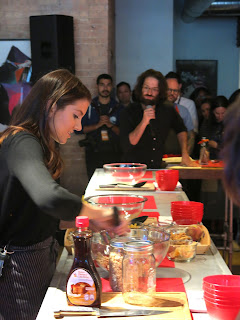 After these first two talks, Brandy snuck down to the gallery to witness the Kellog's Cereal Bar Throwdown, where the three chefs who had designed the reinvented cereal bowls (the third chef was Matthew Rice) would be presented with a choice of 20 mystery ingredients and tasked to design another bowl on the fly in just 5 minutes.  Chef Mack shocked the audience by adding corn kernels to her cereal as well as blueberries and and maple syrup.  Chef Rice went for everything fruity, mixing Fruit Loops with mangos, peaches, and blueberries.  Chef Koslow won the throwdown with her savory take on cereal, using mint, burrata, and peaches with milk steeped with sweet corn.  Fellow blogger Amanda Topper was lucky enough to be selected from the crowd as one of the judges and her expert analysis of the entries proved to be a great amusement to the gentleman hosting the contest.  "Just goes to show that food bloggers do actually know what they're talking about," Brandy smirked to herself. 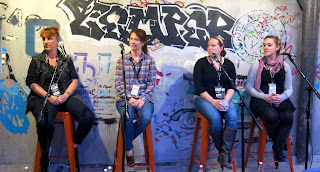 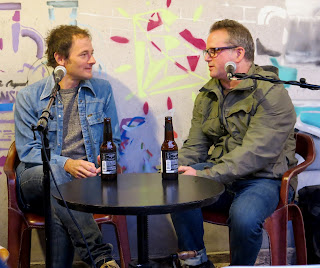 The second round of panels began with an intimate chat with Chicago restaraunt kingpin Chef Paul Kahan and musician John Stirratt from Wilco.  The talk was pretty enlightening in that the two compared the sort of collaborations needed between band mates and kitchen mates as well as told stories about their friendship, which began when Paul Kahan spotted John walking with his family outside Big Star and yelled to him across the street that the restaurant was currently playing one of his songs.  After that, an all female panel of pastry chefs and bakers had a very frank discussion about industry operations and stigmas.  Queen of Chicago Sweets, Mindy Segal expressed concern for fellow baker Sandra Holl and her acclaimed bakery Floriole (which started as a farmer's market stall), explaining that many bakeries have to resort to wholesale in order to support their operations, which ultimately hurts the baker and can over time decrease the quality of the products.  Restaurant pastry chefs Meg Galus and Leigh Omilinsky acknowledged how privileged they were to work with restaurant groups and chefs that were fully supportive of their creative process, and also made a point of the kind of open camaraderie that exists between most pastry chefs and bakers, including all the women on the panel, to the extent of being willing to share everything from recipes to sourdough starters with each other. 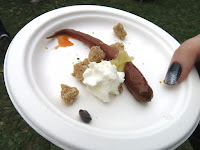 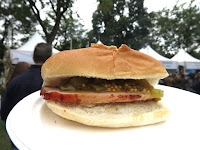 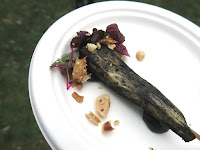 Sunday ushered in the All Star BBQ, where chefs that had participated in various parts of the weekend gathered together in Palmer Square to grill up some extraordinary bites for the attendees.  Some of Brandy's favorites included a butternut squash sausage sandwich from Chef Matthias Merges (she actually induced a blush in Chef Merges when she informed him of just how much she adored Yusho), a mock Chicago dog made by Chef Jessica Koslow (a Californian) that featured a roasted carrot in place of meat, a beef heart slider from the guys at Publican, and a buttermilk and beef fat parsnip on a stick from Chef Matt Danko.  Paul McGee provided a whopper of a cocktail, paired with Chef Pete Coenen's smoked brisket and green tomato salsa, while Chef Tony Quartaro shocked and amazed with his sweet and savory tiramisu carrots paired with a smooth and creamy coffee drink.  The showstopper was Abe Conlan from Fat Rice who created some sticky rice dumplings wrapped in banana leaves and paired up with visual artist Jordan Martins to create colorful wood blocks that they hung from a tree and then hung the dumplings from to be "picked" like fruit by the attendees.  Dessert was a little lacking this year with the bulk of the sweet stuff being provided by festival sponsors Cypress Grove, which put up some of their delicious blue goat cheese with a drizzel of honey, and Lifeway Foods, who handed out frozen kefir bars. 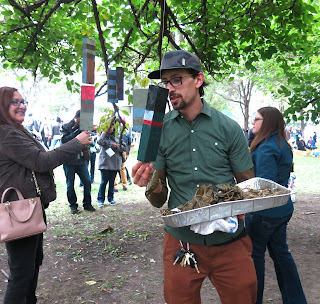 "I do so love Taste Talks," Brandy mused as she sat back for a moment at the BBQ, "It makes for such a varied and enlightening end to the big festival season.  I am so glad they've decided to make a home for themselves in Chicago because for the second year in a row, I've not only gotten to sample some rather amazing food, I feel I'm coming away with some inspiration, some understanding, and an even better appreciation for what is put on my plate and all the people it took to get it there."

The writers of this blog were invited to attend the mentioned events free of charge in order to facilitate the writing of this post.
Posted by Bunny and Brandy at 11:28 AM