From the Farm Dinner at Farmhouse 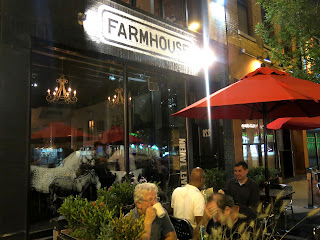 Brandy has always been a fan of eating as locally as possible.  Granted, this hasn't always been easy, especially for those six months she spent living in a penguin sanctuary in the South Pole, but for the most part, Brandy finds that she enjoys her food that much more when she knows exactly where it came from.  "Farmers are the unsung heroes of every day life," she often says, "Not a day goes by that I'm not thankful that someone somewhere decided to plant a crop of asparagus or culture some goat cheese.  Providence bless the farmers!" 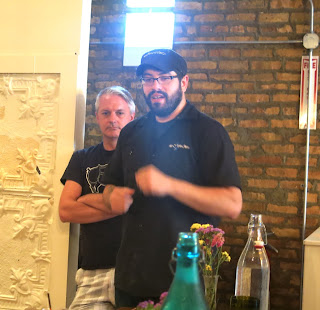 Being ever conscious of where her food comes from, Brandy has loved seeing the trend of recent years of listing the origins of produce, dairy, and meat on restaurant menus.  Names like Klug Orchards, Slagel Farms, and Three Sisters are practically a guarantee of great produce, meat, or grains for Brandy at this point.  So when one of the leading restaurants of the farm-to-table movement in Chicago, Farmhouse, invited her in to their Gold Coast location for a special five course dinner in which they would showcase not only the fruits of local labor, but also some local craft beers, Brandy simply could not say no. 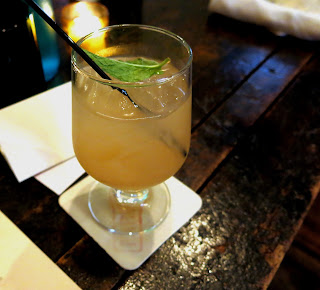 Farmhouse are such big believers in farming locally that they actually own their own farm, which creates much of the produce for their restaurants (the second being in Evanston with a third to open soon).  There's even a rooftop garden at the Gold Coast location that produces chilies and micro greens, which the chefs and bartenders are encouraged to visit every day in order to get inspired to create new dishes and cocktails.  The decor of Farmhouse is ecologically minded as well, using salvaged pieces from old buildings to create an antiqued, rustic, yet comforting feel.  Even the black walnut wood used to make the bar came from the Farmhouse farm property. 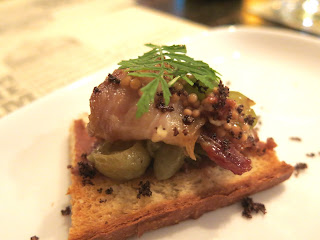 After a gorgeous and fortified summer cocktail, the first of the dishes arrived at the table.  The first course consisted of a simple amuse bouche, made with green grapes and cured ham on a thin piece of crusty bread.  The two bite wonder was a great start for things to come with bright bursts of flavor from the fruit, a smooth umami sensation from the ham, and a nutty, buttery richness from some fresh butter and whole grain mustard.  This paired very well with Farmhouse's own Free Priscilla Cider, made with tart apples from their own orchards, which was crisp and rather refreshing with less sweetness than a typical cider. 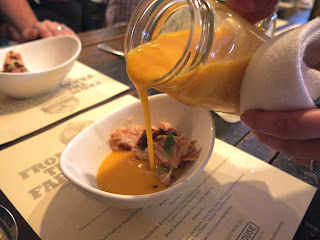 Next came the Chilled Melon Soup with spiced yogurt, mint, and njuda.  The soup was bright and fresh as a summer day, ending in a smokey and slightly heated finish that spoke of the oncoming fall.  Brandy particularly liked the torn up bits of poolish (a type of cracker-like flat bread) that added a bit of chewy texture, keeping things exciting bite after bite.  This dish was paired with the Calmut Queen from 3 Floyds, a wheaty beer with a nice citrus finish. 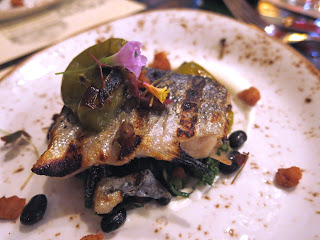 The fish course was a Grilled Rainbow Trout with tomatillos, bacon lardons, and black bean relish.  The skin of the fish was delightfully crunchy, while the meat was tender, flaky, and absolutely perfect.  The beans had a little bit of bite to them, cut with the soft acidic tomatillos, and finished off with some fresh herbs from the rooftop garden.  The bacon actually seemed to be gilding on the lily and Brandy could have easily enjoyed the dish without it.  Revolution Brewery's Rosa was the accompaniment to this dish, a beer that Brandy had already had and grown quite fond of for its floral notes and smooth sipability. 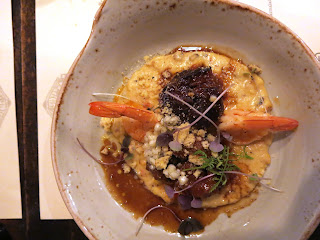 Finishing off the savory dishes was a play on a surf and turf with BBQ braised shortribs and butter poached shrimp with popcorn grits.  This was perhaps Brandy's favorite dish of the night, if only for the fork tender shortribs with their slightly sweet glaze.  The grits too were nothing to sneeze at with a nice stone ground texture and true popcorn flavor, enhanced by crumbles of sweet dehydrated cornbread.  The beer with this dish was Dark Horse's Smells Like a Safety Meeting, a very hoppy, full bodied beer that could stand up to the bold flavor of the meat. 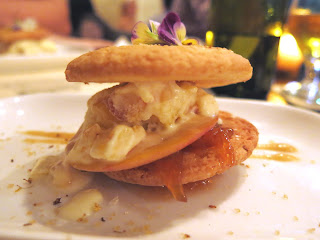 Lastly, for dessert, Brandy was presented with a Peaches and Cream Ice Cream Sandwich.  The peaches, which had been made into a marmalade, were almost so sweet that they bordered on syrupy, but not in a bad way, as the dry shortbread cookies and very floral vanilla ice cream helped to balance them out.  This pairing was perhaps the most well thought out one of the evening, as the Penrose De Minimus Mandarina was rather sour when tasted on its own, but enjoying it with a sweet dessert brought out its more fruity and malty flavors.

Executive Chef Eric Mansavage certainly did himself proud, making use of the absolute best in late summer flavors and showing how locally produced products can inspire all sorts of unique combinations.  "If I wasn't such a city minded gal, I might consider buying a peaceful little farm myself and learn to cultivate the land.  Or I can do what I've always done and let those who already do it, do it better than I ever could while I enjoy the spoils of their efforts.  Yes, that seems the sensible way to go."

The writers of this blog were invited to dine free of charge by the restaurant in order to facilitate the writing of this post.