Shake Shack or Between a Rock and the Concrete

*We would like to apologize for the quality of photographs in this post, which is below our usual standard.  Normal service will be restored next week. 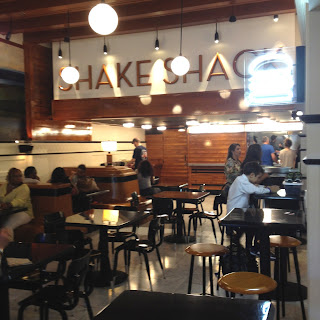 Lately it seems as if every established quick service food chain has been desperate to get their stake in the growing Chicago culinary scene.  International additions to the landscape like Le Pain Quotidien from Brussels, Nando's from South Africa, and Pret a Manger from England have even ushered in chains from other states, like Snap Kitchen from Texas, Sonic from the west coast, and most recently New York's Shake Shack.  Brandy first caught wind of the buzz around Shake Shack last year when their first location opened up in River North, causing lines around the block of Midwesterners and East coast transplants desperate to get their hands on some of the burger joint's storied wares.  "For goodness sake, how good can a quick service burger be, really?" Brandy lamented at the time, and as a stubborn opposer of anything trendy, she decided to not join the hordes until the furror died down a little. 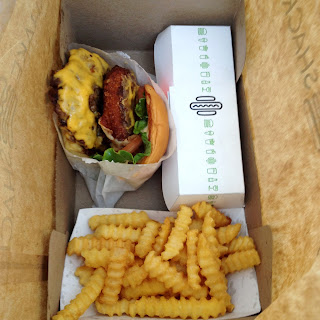 As the weather began to even out into the low 70's, Brandy found herself wandering about downtown one day, looking for a bit of nosh she could take with her into the park for a good old fashioned picnic when she stumbled upon Shake Shack's recently opened second location inside the newly opened Chicago Athletic Association Hotel.  The smells of frying burgers was rather intoxicating, and as masses of people didn't seem to be spilling forth from out of the door, so she figured the time was right for a little peek into exactly what made Shake Shack so sought after.

Shack Shake kept their design simplistic so as to not overshadow the beautiful vintage lobby they resided in.  The signage was a great help in controlling the flow of traffic from ordering to paying to picking up one's food, and ample seating inside at tables and outside on picnic benches meant those eating in could be accommodated quite easily.  Wandering up to the first station, Brandy quickly scanned the menu and placed her order to go, then about ten minutes later, after being presented with all of her treats, she headed out to the park for a little picnic in the sunshine. 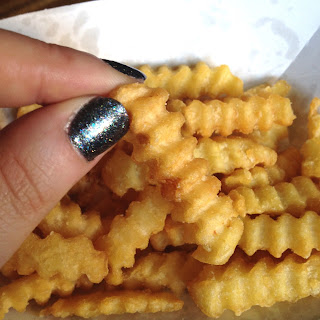 First Brandy eyed up the Fries.  As far as side dishes went, there was really only two choices: fries and cheese fries, and since she was indulging in so much more, Brandy went the simpler route.  The fries were crinkle cut and nicely crunchy without being greasy at all.  "As good as these are, I'd better save a few of these...for dipping into my ice cream, as I understand is traditional," Brandy said, mischievously. 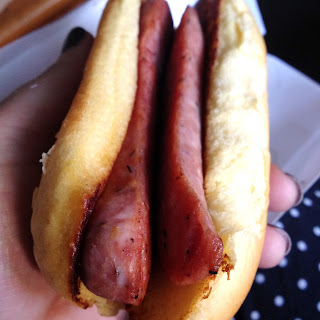 One of the unique dishes to both Shake Shack locations in Chicago is the Publican Pork Sausage, which as its name implies, uses a pork sausage from Chicago's own Publican Quality Meats.  Sadly, upon opening the box, Brandy was rather shocked by her dog's nakedness.  According to the menu, the dog was supposed to feature cheddar and American cheese as well as fried shallots, but this dog was entirely undressed.  Brandy wondered briefly if she had not ordered the dog properly, as she knows full well there are several places in Chicago where one needs to know secret terms just to step into the place, but logic would tell her that simply saying the name exactly as it appears on the menu should result in the item described.  Regardless of its nakedness, the sausage was pretty tasty with a bold flavor and a great snap, which was helped by the fact that the dog had been split and grilled down the middle.  The bun too was very nice, being soft and slightly sweet with a buttery finish. 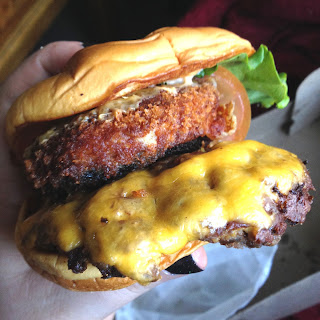 Next, Brandy dug into the Shack Stack burger, a combination of the standard cheese burger and the 'Shroom burger, which featured a portobello mushroom stuffed with Muenster and cheddar cheese, then coated in a crunchy batter and deep fried on top of a beef patty with lettuce, tomato, and "Shakesauce."  Brandy really liked the texture of the mushroom on the beef patty, which lent not only flavor and juiciness, but a uniqueness that she had never seen in any other burger.  The beef itself wasn't particularly juicy, but it was tender enough.  Surprisingly, the overall flavor was good, but extremely salty, making Brandy wish she had ordered up a drink or two. 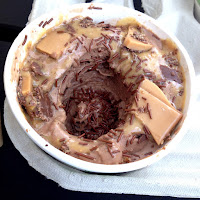 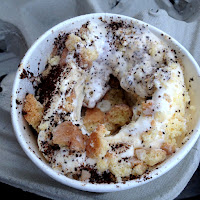 Indecisive as always, Brandy decided to try two of the Shake Shack signature Concretes, which were limited flavors only available at that location: the Millennium Perk and the Penthouse Sweet, both of which featured well known Chicago treats mixed into their signature custards.  The Millennium Perk was made from vanilla custard with Intelligentsia coffee beans and old fashioned donut pieces from Glazed and Infused.  Brandy thought the thick texture of the custard was simply dreamy, and the slight bitterness from the coffee beans was a perfect match for the sweet base as well as the chewy, cakey bits of donuts.  The Penthouse Sweet featured chocolate custard with sprinkles peanut butter sauce, and pieces of pecan walnut caramel toffee from Vosges Haut Chocolates.  This was decadent as a candy bar with lots of crunchy surprises throughout from the toffee, as well as an underlying nuttiness from the peanut butter sauce, which mixed seamlessly into the custard.

Her entire, admittedly over indulgent, meal came out to just under $30, which isn't such a bad price, and though her food did arrive quickly and the service was relatively polite, Brandy just couldn't get that naked dog out of her mind.  "If I wasn't so full, I'd like to march right back in there and demand the cheese and shallots I'm owed," she moaned, patting her very fully tummy and sitting back on the bench to enjoy the sunshine.  Shake Shack was certainly a step up in the fast food arena, though Brandy couldn't help but feel her enthusiasm for the food had been slightly tainted by all the hype.  "I'd take this over a flavorless, frozen amalgamation of beef some other places serve, certainly," as she put it, "And I do like that an effort has been made to break away from the stigma of being a chain by using lots of local goodies to make each location unique.  But at the end of the day, Shake Shack is simply just a burger joint with a lot of good ideas." 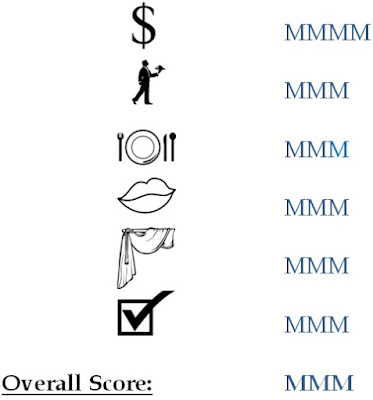