Township or The Indian Spice of Life 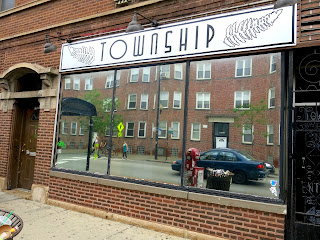 Having been brunching around Chicago for almost five years now, it isn't often that Brandy is taken by surprise any more.  "Though I still love what I do, the menus full of eggs benedicts, French toasts, pancakes, and bacon can start to get a little monotonous from time to time," Brandy related to her dear friend Bailey Blue one day, "Without an original hook, I'm afraid it all starts to meld together in my mind."  "What you need is to spice things up a bit!" Bailey suggested, cheerfully, "Find somewhere that's fresh, interesting, classic, yet with a unique outlook."  "Easier said than done, my dear," Brandy pouted. 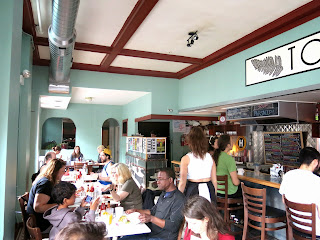 After a bit of research, Bailey found a spot that she though just might do the trick.  Township in Logan Square, a unique concert venue with a small diner at the front, recently revamped it's brunch menu to feature lots of brunch classics, but tweaked with a little Indian flair by Chef Tamiz Haiderali.  Township's goal with brunch is to serve the neighborhood healthy, organic, and tasty meals at a good price, and this sort of point of view is just what Bailey thought Brandy might like to see.

Township was a little small and narrow upon entering, giving off a friendly sort of old fashioned diner feel with mint green walls and minimal decoration.  "I do like a good old fashioned neighborhood diner," Brandy smiled as they took their seats.  She observed the counter off to one side of the space, set up with individual chairs as well as the open space behind the the dining area, where the restaurant could possibly expand into during busier hours or for events. 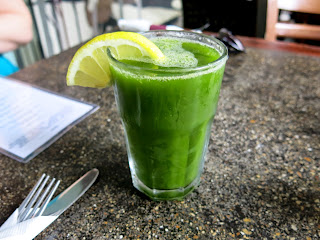 The two ladies both began with a glass of fresh Pineapple, Kale, and Celery juice.  Brandy was slightly worried that the vegetables would over take the flavor, but was pleasantly surprised that the major flavor was indeed the pineapple.  "I've come to have a great fondness for green juices in the last few years," Brandy explained, "I feel like if I have a nice healthy juice during a brunch it will help balance out the bacon and alcohol."  "I don't think that's how it works," Bailey laughed. 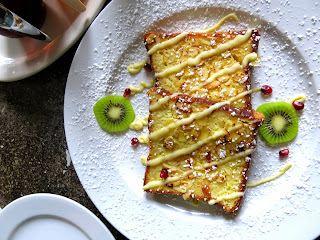 The first course of action, so to speak, was to try out the French Toast, which came with slivered almonds, creme anglais, and fresh fruit.  Right away, Brandy was impressed that instead of the normal mix of berries, this French toast had been garnished with slices of kiwi and pomegranate seeds, which not only made for a stunning presentation, but also provided a more adult bit of tartness to a dish that can sometimes be made sickeningly sweet.  The toast itself was pretty standard, but good, with a soft eggy texture that would please any die hard French toast fan.  The toast also came with an amazing house made Chai Syrup (an authentic chai flavor too, not the pumpkin-spice-esque chai other places try to skate by with) which was so good that the ladies began trying it with everything, from their coffee to a side of bacon. 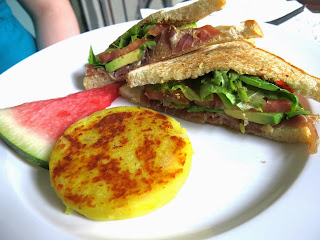 For Bailey's entree, she chose the PLaT, a fresh take on a traditional BLT, but with prosciutto and avocado.  The sandwich, Bailey said, was like a dance of textures between the crunchy greens, the creamy avocado, and the tender, salty prosciutto.  It certainly did deliver on the promise of a BLT re-imagined in a fresh and more healthy way without compromising taste.  The sandwich also came with a slice of watermelon ("I do love a bit of fruit on a brunch plate as a palate cleanser," Brandy beamed) and a Spicy Potato Cake, which was a welcome change from a typical side of roasted potatoes or hash browns.  The potato cake was buttery and rich tasting with an almost polenta like texture, as it had a nice crust on the outside. 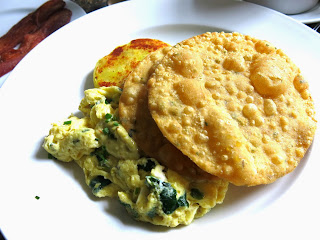 Brandy chose the Saag Paneer Scramble, which added sauted spinach and paneer, a semi firm Indian cheese similar to farmer's cheese or a low moisture ricotta.  Saag Paneer has been one of Brandy's favorite Indian dishes for ages, so the thought of combining it with scrambled eggs was quite exciting.  Though tasty, Brandy did wish the eggs had a bit more of a spicy punch to liven up the palate.  The dish came served with two pooris, a deep fried flatbread with a sort of garlicky seasoning that took the place of toast on a typical breakfast plate.  Brandy really liked combining the pooris and the eggs to add a bit more excitement to each bite.

"You were quite right, Bailey," Brandy smiled at her friend as they finished up their meal, "Sometimes all one needs to fall in love with an old favorite is a fresh outlook."  Township reminded Brandy of one of the reasons she so adores brunch; in capable hands, it provides a chef with a blank canvas on which to build their own vision.  Township not only made this fact apparent, they also brought breakfast back to what it should be, a wholesome meal that wakes up all of one's senses in anticipation of the day.  From the friendly service to the healthy dishes priced mostly around $10 a plate, Brandy found herself feeling quite a fondness for Township's commitment to becoming an asset to their neighborhood.  "Who would have thought all my palate needed was a bit of chai syrup and a dash of international flavor?" Brandy mused, "Just goes to show that though my wanderlust often spurs me to start globe trotting again, there is nothing anywhere else that I can't find here in Chicago."

The writers of this blog were invited by the restaurant to dine at no cost in exchange for an honest review. 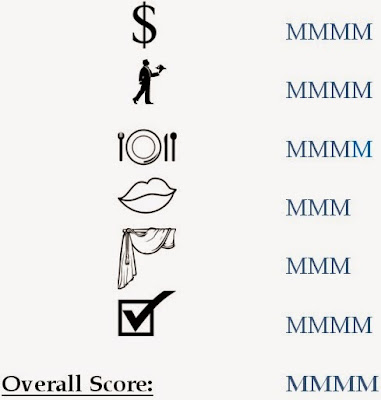